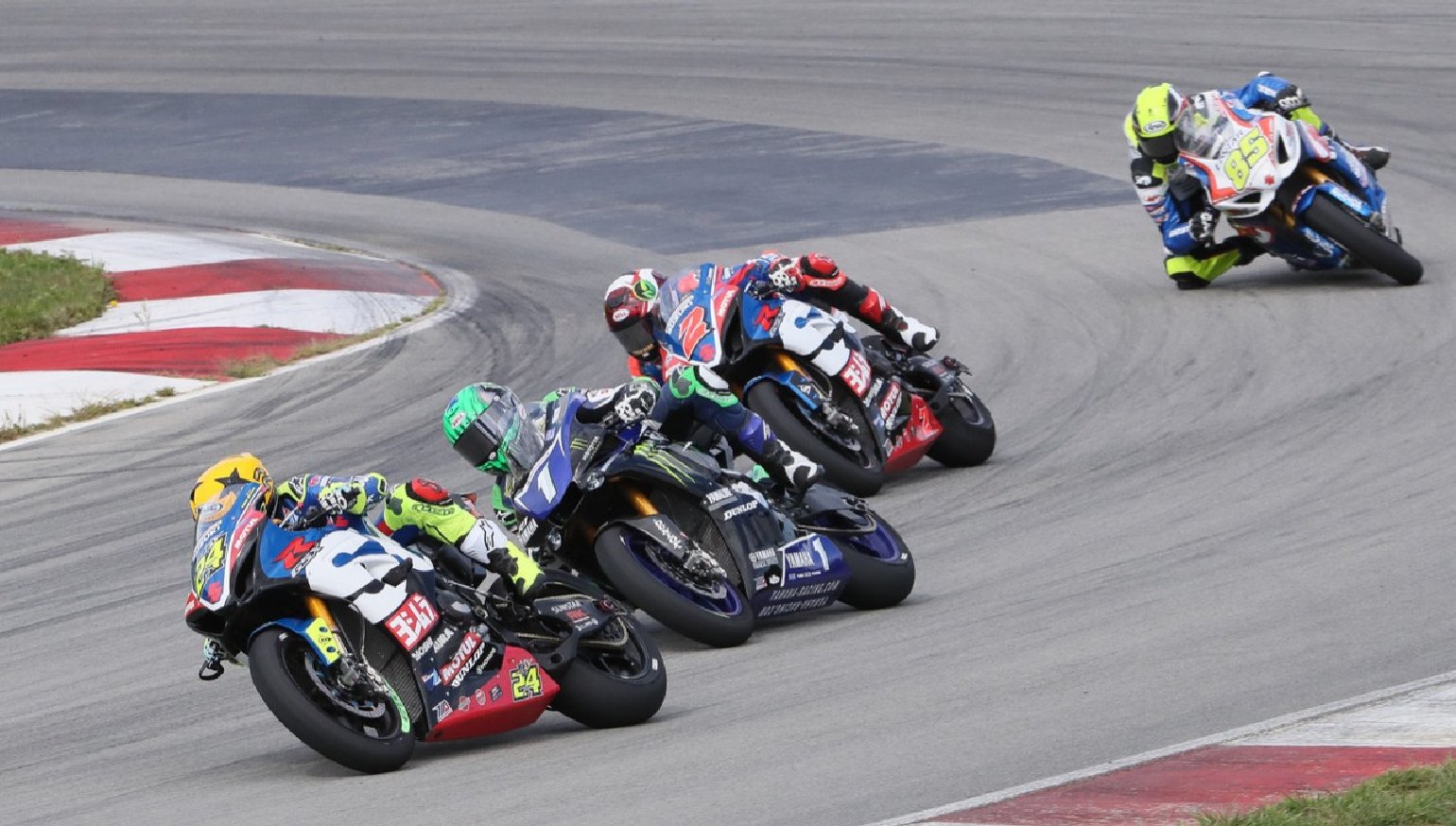 To the soundtrack of an ugly crunch and a quiet ticking, Toni Elias got his hands ever closer to grasping a second MotoAmerica EBC Brakes Superbike title this weekend at Pittsburgh International Race Complex. And he considered himself a very lucky man.

Nobody had a perfect weekend at PIRC, but among the three Superbike title contenders, it was the Monster Energy/Yamalube/Yamaha Factory Racing teammates of Cameron Beaubier and Garrett Gerloff who suffered more. The crunch was something that gave way deep inside Gerloff's YZF-R1 Superbike on Sunday as he was leading race two and riding a swell of confidence from winning Saturday's race one, as well as two of the three previous races. The ticking sound? That's the clock reminding Beaubier that he's running out of time to close the gap to Yoshimura Suzuki Racing's Elias.

As the transporters were loaded up Sunday evening, Beaubier, with two second-place finishes, had lost just one point to Elias, who finished third and first. But more importantly, he lost a third of his remaining opportunities to gain on Elias, who is now 35 points ahead with two rounds remaining.

After finishing second to Gerloff in Saturday's Superbike race and gaining four points on Elias, who finished third, Beaubier had a chance to gain five more points on Elias in Sunday's race. But with a little more than two laps to go, he made a mistake in the chicane that was added to the end of the PIRC back straight specifically for MotoAmerica, to keep the speeds of the Superbikes commensurate with the amount of runoff available in that final complex of turns. Beaubier entered the chicane too fast, clipped the curbing and ran off into the grass, handing Elias a lead he didn't expect.

Angry with himself, Beaubier responded by setting the two fastest laps of the race on his last two laps, trying to close the gap to Elias. He did, but didn't catch the Suzuki rider until the last corner, and Elias was playing defense at that point.

"I was so frustrated I made a mistake," said Beaubier, also recalling his early crash in race one at Sonoma Raceway two weeks ago. "I was so irritated because man, I made another mistake. The years I've won my championships, I've been known for being smooth, htting my marks and being pretty consistent and I just feel like I haven't really been like that lately. There at the end I just put my head down and gave it everything I had just to try to do something or get close enough to maybe fight in the last corner.

"I expected him to take a tight line in the last corner but I was going to try to go even tighter. I just wasn't close enough. I got in there and swung it wide and tried to cut back underneath but I had a big slide and that was that. It's just frustrating when I know I have a really good bike around this place and I came up short yesterday and I came up short today and it's just completely my fault."

Elias had his own struggles all weekend and was glad to leave PIRC one point better off than when he arrived. After Saturday's race, he felt confident he understood the direction the team needed to go in adjusting the Suzuki GSX-R1000 for Sunday, but it turned out that was a mistake. As a result, Sunday was his "worst race of the year" in terms of feeling comfortable on the motorcycle and it was only Beaubier's error that allowed Elias to win.

"I think if I was leading the race on the last lap with him, he could pass me easily any time he wanted," Elias said. "So, I've been lucky. Today I've been super lucky."

I can't quite remember how it goes, but there's some old cliché about racing bringing about the highest highs and lowest lows, and Garrett Gerloff experienced all that this weekend. At the last two rounds, he'd scored his first two wins and backed them up with two second-place finishes. On Saturday at PIRC, he took the lead on the first lap and opened up a gap of nearly two seconds. Then he misjudged his speed at the end of the straight and ran off track, letting Elias and Beaubier past.

"I blew a couple-second lead because of a mistake I made and had to go fight Toni and Cameron for the win again and I was just so happy I won that fight," Gerloff said.

Gerloff not only recovered and regained the lead, he was able to pass his teammate twice going into the tricky back-straight chicane and held off Beaubier by 0.326 seconds at the finish line, putting him just one point behind his teammate and defending champion.

Then came the lows on Sunday. Again, Gerloff jumped out to an early lead, but after just a few laps he slowed and pulled into the pits. By the way he got off the bike and nobody rushed to try to fix anything, it was obviously a serious mechanical problem.

"I started hearing stuff and the bike didn't want to keep going," Gerloff said. He brushed off the rare mechanical failure philosophically. "You've got to have the lows so you really appreciate the highs."

The turn of events leaves Gerloff 56 points behind Elias and 21 behind Beaubier. After Saturday, he had to be considered a real contender for the championship. After Sunday, only bizarre misfortune to the two experienced racers in front of him could hand him the title now.

"It's a bummer what happened to Garrett," said Beaubier. "He definitely had the pace on all of us this weekend. He set the pace in every session and yesterday he was really strong in the race."

Another Superbike rider facing highs and lows of slightly lesser magnitude was M4 ECSTAR Suzuki's Jake Lewis, who qualified third for his best starting position this year but crashed out of Saturday's race on the first lap after he and Yoshimura Suzuki's Josh Herrin made contact and got tangled up, causing both to crash. On Sunday, Lewis led several laps after Gerloff pulled out and ended the race in fourth, his best finish this season.

Supersport: As good as racing gets

What makes for great racing? Tight battles all the way to the finish line, of course. Seeing a rider overcome adversity. Watching new young talents emerge. What if you had all that in one weekend? That would be the Supersport class at PIRC.

Sunday's dramatic race was set up by Saturday's eventful race. The M4 ECSTAR Suzuki teammates, points leader Bobby Fong and 17-year-old class rookie Sean Dylan Kelly were leading the field when Fong high-sided violently, tumbling roughly in the grass and his GSX-R600 falling on top of him.

After a red-flag delay to attend to Fong, Kelly battled with Tuned Racing's Bryce Prince, who had earned pole position, but the final lap showdown fell apart when Prince crashed in the final complex of corners, allowing Kelly to seal his first MotoAmerica victory.

On Sunday, Fong woke up sure he wouldn't be able to race. His left ankle was injured, he suspects he has a fracture in his left foot (pending further medical exams this week) and his back hurt from the pounding he took. But he was cleared to race because he did not suffer a concussion, despite a bump on his forehead, even though he had to hobble to his GSX-R600 on crutches.

"My back is really what's really killing me," Fong said. "Every little movement sends shocks of pain through my body. So I woke up this morning and mentally I didn't want to tell my team, but I'm like, no way."

Time and painkillers did allow Fong to get on the bike and try to preserve his lead in the standings, however. A red flag for a crash by Hunter Dunham, filling in for the MP13 Racing Team, meant Fong had to do two starts.

Kelly showed his veteran teammate lots of respect but no mercy, pushing him hard to the finish and beating Fong to the line by the width of a tire tread, an official margin of 0.005 seconds. The two Suzuki riders were followed by Yamaha riders P.J. Jacobsen, Hayden Gillim and Richie Escalate, all of them within half a second of Kelly.

"I can't believe he was riding as hard as he was today," Kelly said of Fong. "I know how much pain he was going through. Just huge respect, dude, 100 percent."

Rickdiculous Racing's Hayden Gillim finished third and fourth, gaining nine points on Fong and retaining second place in the standings. The unknown is what condition Fong will be in when the series resumes in two weeks at New Jersey Motorsports Park. What seems more certain is that Kelly, now with a double-win weekend to his credit, will be an even more dangerous threat at the front of the field.

The runaway points leader in Liqui Moly Junior Cup, Rocco Landers, was briefly slowed in his title quest on Saturday when a clutch problem forced him to pull off the track while leading. That allowed Altus Motorsports rider Kevin Olmedo to collect his first win this season on his Kawasaki Ninja 400.

The normal pattern resumed on Sunday with Landers winning for the 10th time in 13 races this year, leading from the start. Landers has a 75-point lead going into the final two rounds.

Franklin Armory/Graves Kawasaki rider Andrew Lee now has a solid 48-point lead in Stock 1000 after his two closest competitors, Stefano Mesa and Michael Gilbert, crashed together and both were unable to finish in the one Stock 1000 race at PIRC.

The Pittsburgh round was one of the weekends this year that featured two Twins Cup races instead of the usual one, but the two podiums were identical, with last year's Junior Cup champion Alex Dumas doing the double, Draik Beauchamp second in both races and veteran Michael Barnes third. Those three riders are also one-two-three in the standings, with Dumas nine points ahead of Beauchamp and 19 ahead of Barnes. 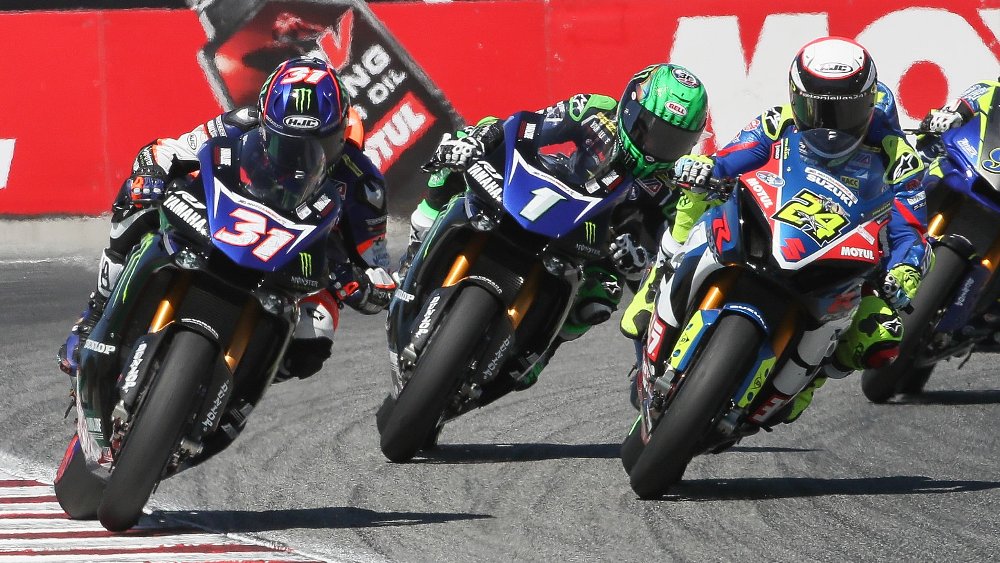