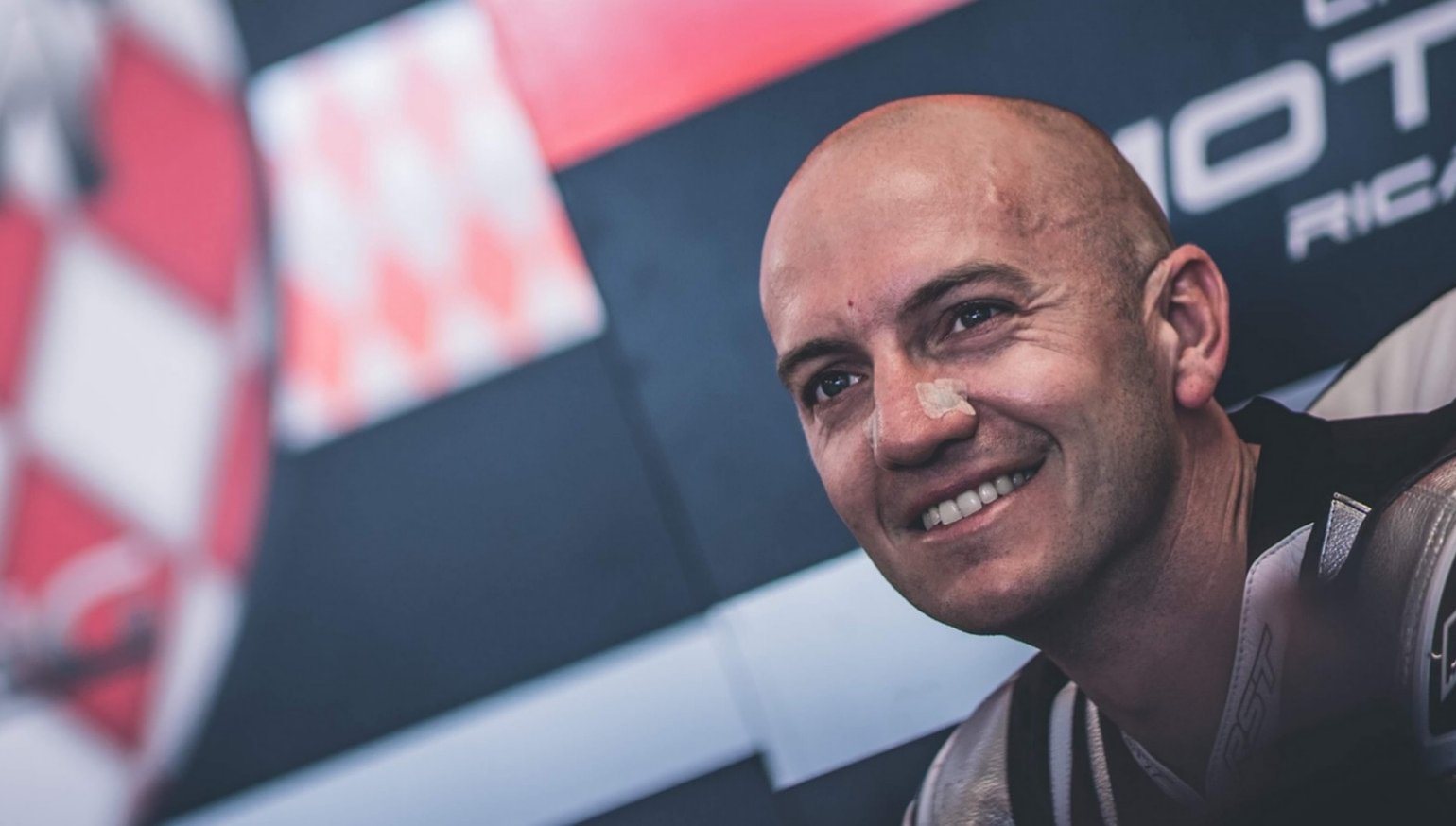 The plan to give U.S. kids the chance to race motorcycles

From 2009 to 2016, Brandon Cretu of York, Pennsylvania, was a regular racer on the Isle of Man, at some of the big Irish road races, and on the island of Macau. Then, through a combination of good luck and dues paid, he landed a gig with Team Rabid Transit in MotoAmerica. For the 2016 season, Cretu competed in a few Superbike races for Rabid Transit and also managed the team, which ran Sheridan Morais in the Superstock 1000 class and Renzo Ferreira in the in the KTM RC390 Cup.

The following season, Brandon managed Rabid Transit’s transition as Morais and Ferreira moved to the World Supersport and Supersport 300 championships. The team also contested some World Endurance Championship events, with Cretu filling in as rider/manager. But any hopes of building Rabid Transit into a major league team, or using that job as the cornerstone of a real career in race management, ended when team owner Selby Jones suddenly died in January 2018.

So at 34 and with his racing career winding down, Brandon, like so many racers before him, had no choice but to reinvent himself. One thing that makes him different, though, is that he also set out to reinvent motorcycle roadracing in America.

Putting U.S. racers back at the front of the grid

Between 1978 and 1993, Americans won 13 of 16 World Championships in the 500 cc class (precursor to MotoGP). The single biggest reason for U.S. success was that the engines of that time produced far more power than the tires or chassis could handle. American racers like Kenny Roberts, who had come up racing dirt track, were well adapted to controlling a sliding, bucking motorcycle.

U.S. domination in the World Championship probably helped boost both the Grand National and AMA Pro Racing Superbike Championships and encouraged the big OEMs to pump money into American racing.

However, the Europeans were quick to adopt Roberts’ techniques. Roberts' sponsor, Marlboro, paid him to establish a training "ranch" in Spain, so he could teach his sliding style to up-and-coming riders. Then, "big bang" two-strokes became somewhat more rideable. And, as we entered the four-stroke era, ride-by-wire systems and sophisticated engine control software further devalued old-school American flat trackin’ skills.

Today, there's not a single U.S. rider competing at the top level in MotoGP (nor World Superbike, for that matter) and American, British and Australian fans complain that MotoGP organizers favor Spanish and Italian riders. But the truth is that Spain and Italy have exponentially more youth participation and do a better job of nurturing young talent.

The United States has only won one title in the MotoGP era, courtesy of Nicky Hayden in 2006. At the moment, it’s hard to even see our next future champion on the horizon. Part of the problem is that there simply aren’t enough American kids at the base of the pyramid. There aren’t enough racing opportunities; many of the opportunities that do exist are too dangerous for young kids, and too expensive for most parents.

That’s a problem Ohvale’s minibikes were created to solve.

Racing on a kid scale

Ohvale’s founder, Valerio Da Lio, is an Italian who lives a few miles from Venice. His company already had serious engineering chops; they also design and prototype for Kymco, Honda, and Ducati, and do bodywork for Aprilia’s MotoGP team.

Da Lio set out to create a minibike that would be affordable and offer a riding experience that was a kinesthetic match for a modern sport bike at much lower speeds, suitable for racing on a typical tight, slow go-kart track.

Ohvales have 10-inch wheels, a seat height of about 24 inches and a wet weight of around 150 pounds, so you can easily imagine that young kids are comfortable on it. You might be surprised to learn that full-sized adult riders also fit. Although there’s only one rolling chassis, Ohvales are available in four flavors, ranging from a user-friendly 110 cc twist-and-go with push-button start to the racy Daytona, a 190 cc, four-valve single with a four-speed tranny. U.S. prices range from $4,500 to $6,900.

Da Lio was surprised that his earliest adopters were adults who already race; they bought Ohvales as affordable practice bikes. The machines’ popularity with racers suggests that Da Lio achieved his goal of creating a small motorcycle that would replicate the sensation of riding a Supersport bike, at much slower — hence safer — speeds. But within a couple of years he achieved an equally important goal, which was to create safe, affordable, and competitive racing classes for kids starting out.

Now, there are three separate Ohvale series in Italy. Kids as young as 10 can race Ohvales at events that run in conjunction with both major national racing series, and there’s an arrive-and-ride "rental" series.

Brandon Cretu creates a job for himself

Brandon saw Ohvales in his social media feed, in posts from racers like Jack Miller, who uses one to work out. He realized that bikes like those could enable ordinary kids to try roadracing on hundreds of go-kart tracks across the United States.

“That piqued my interest,” he told me. “Then a closer friend of mine, Marvin Fritz, who races for the Yamaha WEC team, bought one, and he told me it was an incredible training bike.” That was last spring. At the time, Cretu was planning a trip to Europe and he arranged a meeting at the factory.

Brandon has a degree in marketing, an MBA, and previous work experience as a key account manager for Hilti. He didn’t just go over for a meet-and-greet; he arrived with a whole deck outlining a plan to re-grow roadracing in the United States. After years of turning down American dealers who saw Ohvale as simply one more product, Da Lio saw a kindred soul in Cretu, who quickly signed a deal to become the U.S. distributor for Ohvale.

“We brought in 11 bikes to start,” he said, “and we’d sold them all before they even arrived.” In less than two years, he’s sold about 150 bikes. The U.S. market is now second to Italy and growth is limited only by the Italians’ ability to manufacture bikes.

Cretu’s business plan is primarily based on direct sales through his website, which he promotes through social media. However, he’s signed two dealers who share his commitment to building up the Ohvale racing community in the USA: Eleven Motorsports, which is a slick track-day and rental operation based at Motorsport Ranch, at Cresson, Texas, and ForzaSBK, in the Pacific Northwest.

Right now, Cretu can sell all the Ohvales he can get his hands on to adults, but he has organized two races for kids that will take place at Pittsburgh International Race Complex during the MotoAmerica Championship of Pittsburgh. The Ohvale Talent Cup is an arrive-and-ride proposition, with two classes; 16 identical 160 cc four-speeds that Brandon’s bringing in from Italy, and 10 110 cc automatics that Eleven Motorsports is bringing up from Texas. The 160cc "Premier" class carried a $1,125 entry fee for riders from 10 to 14 years of age, while the 110 cc "Sport" class was $725, for riders from 7 to 10. Every grid position in both races sold out as soon as he posted about it on social media.

“There’s an entry fee, but for that we provide the bike, stands, tire warmers; everything you need,” he told me. “It’ll be like being a factory rider.”

The winner of each race will get to take the bike home and the top two finishers in the 160 cc class will be flown to Italy to race in the Italian season finale.

“We’re not making money on it,” Brandon admitted. “In fact, we’re losing. But we hope that by showing people what can be, they’ll say, ‘We want to have a racing series next year’.”

There are already Ohvale series running at Cresson, where they built a kart track for just that purpose. There is an Ohvale class in the M1GP minibike club that races at the Willow Springs kart track near Los Angeles, and one in the New Jersey Mini GP club.

(Author's aside: I’m trying not to just blurt out, “Shut up and take my money!” because the idea of racing one of these little bikes on a tight and twisty go-kart track would be fun as hell and great practice. Tires last about 20 hours and Cretu stocks all the usual crash spares. A guy wouldn’t even need a full-sized van or trailer. I will report back if I get on one of these.)

I think Brandon Cretu may well deliver on his promise to create a grassroots roadracing option for a lot of American kids. Racing Ohvales on go-kart tracks is financially and geographically more accessible — and far safer — than riding even the smallest full-sized motorcycle on any full-length road course. While not cheap, by any means, if you spread the cost over a couple of seasons, racing an Ohvale on a local go-kart track would be comparable to having a kid in "travel baseball." And it would probably not be any more dangerous than participating in a contact sport or snowboarding.

A note from the Department of Brutal Honesty: Even if there are 1,000 10-year-olds racing Ohvales across the United States in five years, it’s unlikely any of those kids will become the 2035 MotoGP World Champion. Rightly or wrongly, MotoGP team managers have stopped looking overseas for rising talent. They’re only choosing riders they’ve watched develop from CEV Moto3 to Moto3 and Moto2. The Spanish and Italian federations support young riders, but Americans have to self-fund; a young American would have to spend seven figures while climbing the CEV Moto3/Moto3/Moto2/MotoGP pyramid.

But 1,000 10-year-olds certainly would sure rejuvenate American club series and feed talent into MotoAmerica.