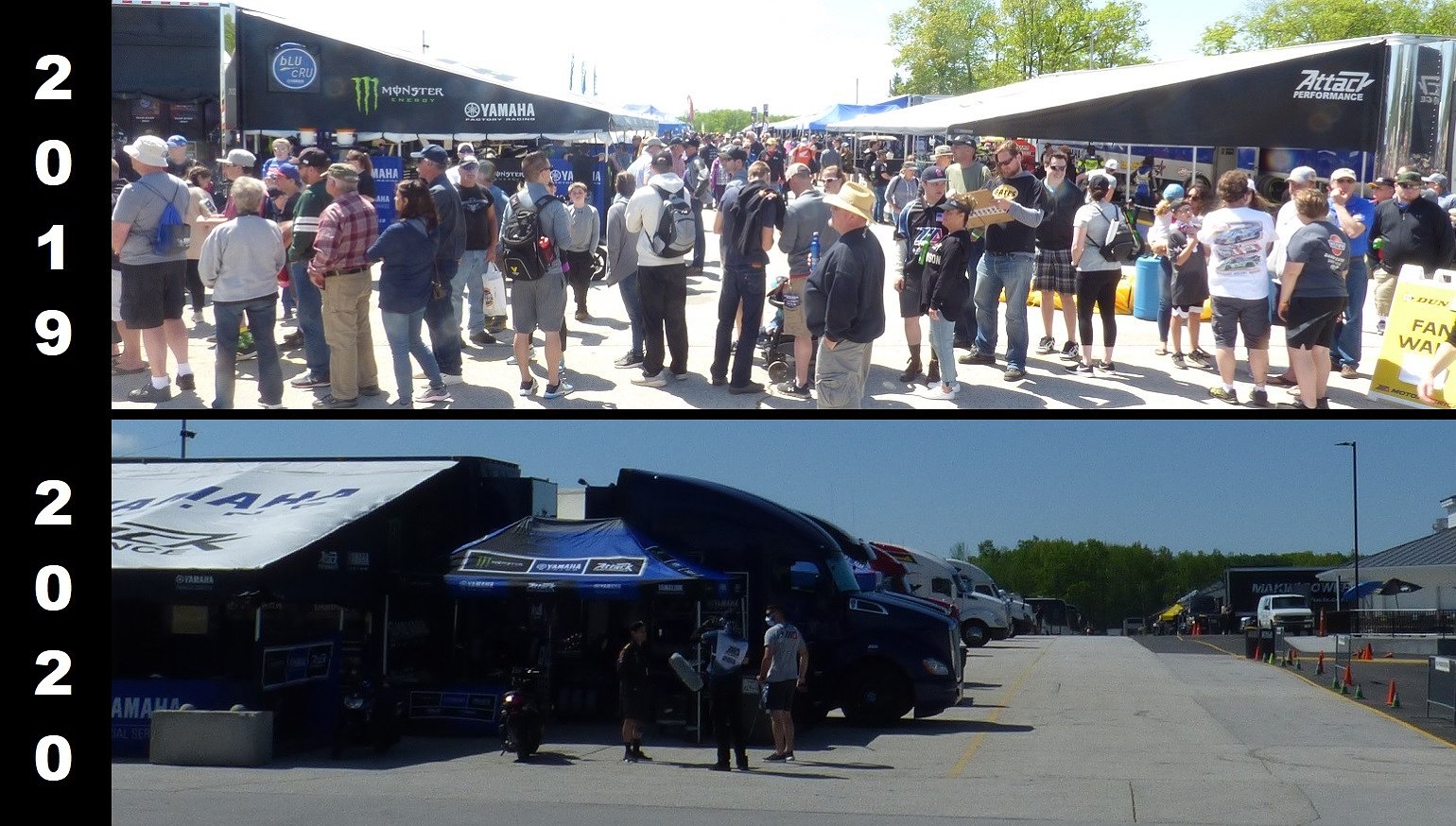 What if you put on a race and nobody came?

What if you put on a race and nobody showed up to see it? What if that was the idea from the beginning?

In these strange new times, the MotoAmerica series has converged on Road America this weekend with racers, teams, officials, track marshals and a television crew, but no fans. It's an approach other series will soon be trying. On Sunday, Monster Energy Supercross begins a rapid-fire series of seven races in three weeks in the same stadium in Utah, none of which be attended by fans. MotoGP is working out the details to return to racing at Jerez in Spain in late July. But MotoAmerica is the first to put on a race, if only by a day. So what's it like to race with no one watching?

To find out, I talked to a variety of people in the paddock Friday. Though it was just the first day and everything is still new to all the participants, there was definitely a feeling of relief to be back racing, and a recognition that some unusual rules had to be followed to make that possible.

Among those rules: no race bikes on pit lane except those participating in the current session. Everyone on pit lane, where team members are working in close quarters, must wear a mask. Teams are considered functional work groups, since it's impossible to maintain a six-foot distance all the time, but teams do not interact with other teams, said MotoAmerica founding partner Chuck Aksland.

"This is an instance where I think everyone understands this is exceptional circumstances and everyone respects what had to happen to have this happen," Aksland said of the first race without fans. "We had a lot of racers and a lot of teams sitting at home. There's really no way to make any money when you're sitting at home."

The lack of fans strolling the paddock and crowding around the riders for autograph sessions isn't the only way the environment has changed.

"Since 1986 I've always been in motorcycle pro racing, and I've never seen anything like this in my life and I never thought I would," said Dunlop's Tony Romo. "But I can tell you, in all that time I've never seen people working together so much. It's like, 'Hey, I don't have masks.' 'Oh, we brought extra.' Everyone is being so good to each other and it's something you don't normally see at the pro level, because they are competitors. You normally see that in club racing, maybe some amateur racing."

Josh Herrin, this year riding a BMW S 1000 RR for Schiebe Racing, is one of the riders who most interacts with fans, but having no one around is only one of the changes he's adjusting to. Because of a crash in the pre-season test, Herrin had essentially no practice time on the new bike before the first practice session Friday. "It's going to be a tough weekend," Herrin said. "I'm four seconds off my time from last year so it's going to be a lot of work."

"I think everybody's excited to be riding but I would have rather just waited until the June race so we could be around everybody," Herrin said of racing at an unpopulated track.

Kyle Wyman, who runs his own team, as well as riding the Ducati V4 R race bike, benefits from a diminished work load, since he doesn't have to worry about hospitality, autograph sessions or the other demands on his time that are part of a normal race weekend. "It's nice to just focus on the functional side of our team and focus on the motorcycle," Wyman said.

"It's somewhat the same under our tent," Wyman said of the unique circumstances. "We've all been together for the weeks leading up to this so we kind of have our functional group. When we leave the pit we throw a mask on. When people enter our pit without one we tell them to hold up. We're trying to set an example for the paddock."

While the lack of fans means fewer demands on riders and, at least potentially, more ability to focus on the job of racing, it isn't a positive for all racers, said Richard Stanboli, owner of the Monster Energy Attack Performance Yamaha team that took over Yamaha's factory Superbike effort this year.

"Some riders really like having the fans," said Stanboli. "They like the interaction, the fans coming over patting them on the back. What rider doesn't want that?"

"I feel like at this track it's even more weird because this is one of the most-attended events that MotoAmerica has," said Jake Lewis, the other Schiebe Racing Superbike rider. "It's one of the fan-favorite tracks so it's definitely weird, but I feel like all the teams and riders are excited to get back going."

Like his teammate, Lewis is hampered by a lack of testing time on the BMW. He signed with Schiebe Racing at the last minute. He's not only missing fans, but also missing his fellow Kentucky riders who are absent this year, such as J.D. Beach and Hayden Gillim.

"It's a lot different because usually we ride up here together and hang out in between the sessions," Lewis said. "I'm the only one still roadracing. Honestly, I didn't even think I was going to have a ride. I was pretty much about to go get a real job and think about what I want to do for the rest of my life."

Of course the pandemic has brought about other changes, some positive and some negative.

"Our supply chain is completely disrupted," said Stanboli at Attack Performance. "We still haven't gotten all of this year's components for the motorcycle. It's kind of a mix-match of 2020, 2019 stuff. So it's been difficult on everybody."

His California-based team has also been disrupted.

At the same time, the pandemic has opened the way for expanded use of technology that should lead to lasting improvements. "We've actually learned a lot of things that will help us be more efficient in some areas," said Aksland. For example, race teams are registering and signing waivers electronically. The riders' meeting was taped and riders were required to watch it remotely. And just in case, there was a quiz at the end, to make sure they really did watch it.

"One rider — who I won't say, but he's a very high-level Superbike rider — thought he could get through it without watching the video, and he failed. So he had to go back and do it over again," said Aksland.

For now, MotoAmerica plans to put on all 10 of its originally planned races, and all of them with fans except for this first one. Most of those rounds have already been rescheduled.

"We've made probably all the adjustments we really can because every motorsport is fighting for the same dates toward the end of the year," Aksland said. And nobody knows what further surprises this unusual year will throw at us. 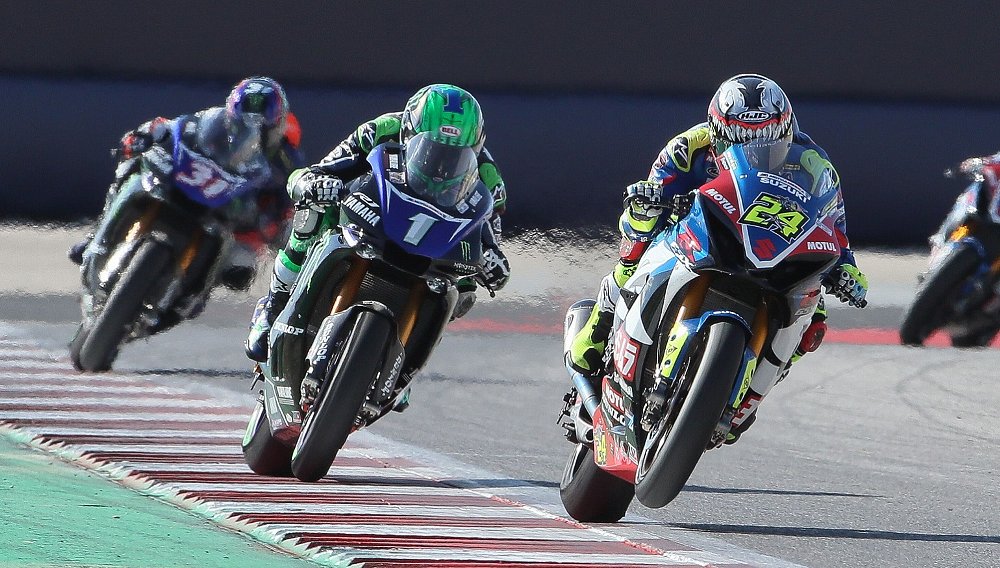 2020 MotoAmerica Superbike season preview: A year like no other Lance Oliver