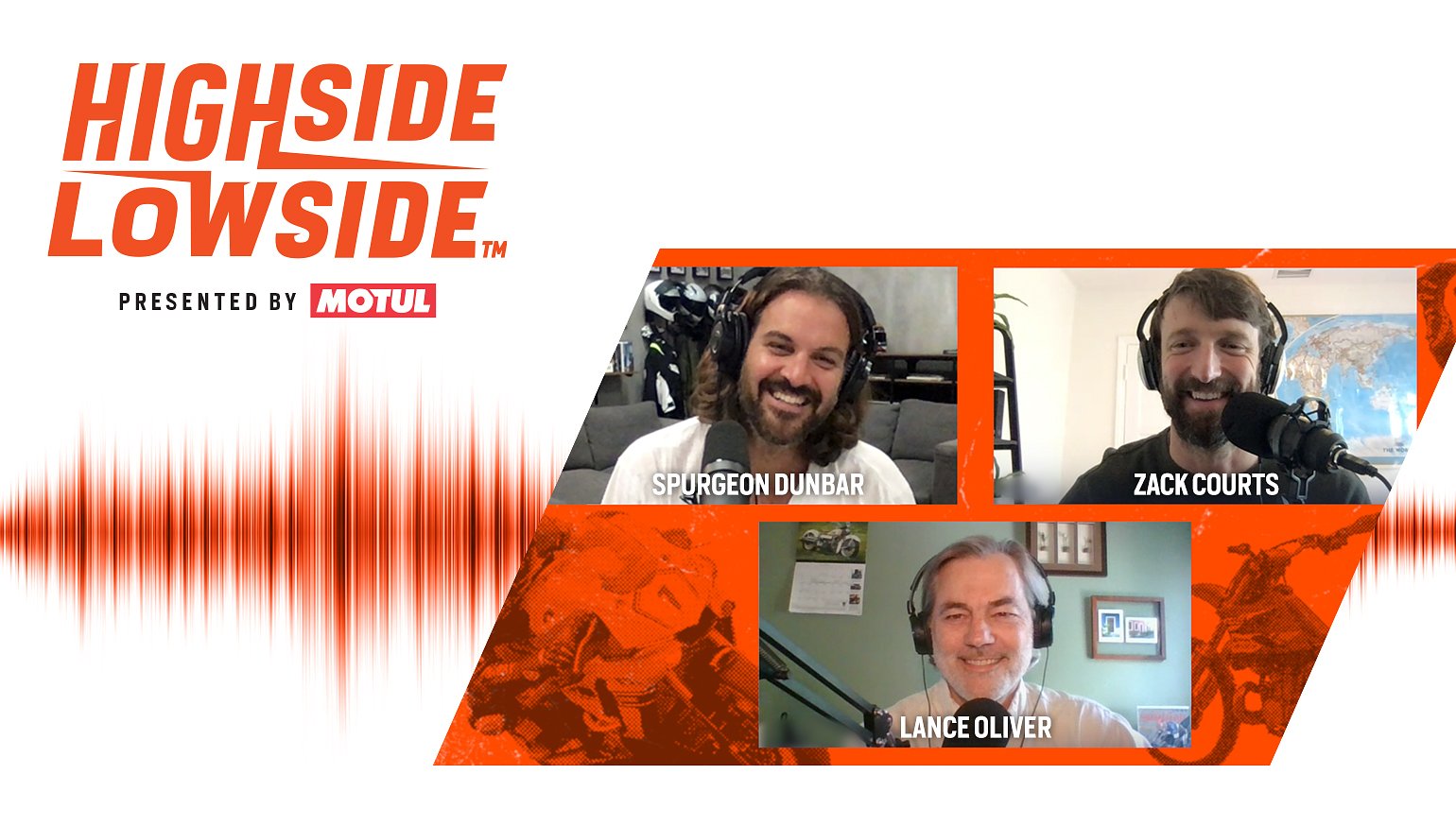 Riding friends. Everyone’s got ‘em. Sometimes you agree with them completely. Other times they are so completely incorrect you can hardly believe what they are saying is part of the English language. But one thing is for sure, those conversations always make motorcycling better.

That simple truth was the genesis for the RevZilla Highside/Lowside podcast. Thanks to listeners like you, we’ve come a long way from our first episode in February 2019. Now in Season 3, and in conjunction with our new sponsor Motul, we’ve got a new format, new guests, new topics, and all of the same opinions, expertise, and personality that you’ve come to expect from the crew on the couch in the RevZilla studio.

Spurg, Zack, and Joe discuss the traits of the perfect ADV bike (and how they would construct it if price was not an issue). From realistic (if not wildly expensive) ‘off-the-shelf’ options, to borderline impossibilities that bend the laws of physics, finding the best setup for an ADV bike ends up saying more about the rider than the ride itself.

Highside/Lowside returns for another episode, and this time, Spurgeon, Zack, and Ari discuss two new triples that demand a closer look. There's the new Triumph Trident, a retro-inspired middleweight that promises loads of fun for a bargain price. Then there's the revised Yamaha MT-09, a legend among modern motorcycles with its potent CP3 mill, new frame, uprated engine, and radical styling. Which bike's the one for you?

The guys are BACK and kicking off Season 3 of Highside/Lowside with a new-look, and the same great sound, as they talk about the most interesting topics in the world of motorcycling. In this episode, Spurg welcomes new co-host Zack Courts, as well as Common Tread’s Managing Editor, Lance Oliver, as the three discuss the pros/cons of buying a cheap motorcycle.

Is the high tide mark of motorcycling truly behind us? How can motorcycling break through to the next level? Spurg, Joe, Ari, and Zack sit down for a full-length discussion about motorcycling, its past successes, its current situation, and its all-important future.

Has a motorcyclist ever annoyed you? Lemmy, Spurgeon, and Joe are back on the couch for another Highside/Lowside to discuss their biggest complaints from around the world of two wheels. But don't worry, they didn't get off easy. The guys must also reveal their own moto sins.

The power plant is what propels us all forward, and some just do the job better than others. In this episode of Highside/Lowside, the guys discuss their favorite motorcycle engines of all-time. Whether it is the acoustics, performance, or overall look and feel, in the end it all comes down to opinion, and the fellas have more than a few on the topic.

Motorcycling is exhilarating. It can also get pretty expensive, pretty quick. Unfortunately, this keeps a lot of would-be riders from ever taking their first spin. In this episode, the guys discuss cheap ways to get into the game as they cover their favorite bikes under $3,000.

Is it the brand? What about the line and the style? Does a engine make it so? The guys are here in the latest episode to discuss what makes a motorcycle a cult classic. And stay tuned for an interview with Zack Courts!

No motorcycle is perfect, and every rider is different. That's why we modify. Whether it's suspension or seats, exhausts or hand controls, one of the most common experiences for all motorcyclists is making the bike their own. In this episode, the guys talk about the most important modifications that they like to make on their own rides.

Old motorcycles are cool. They look cool. They sound cool. They are the epitome of the word itself. That being said, they can also be a massive annoyance. With old parts and antiquated technology, riding a vintage motorcycle is harder, less comfortable, and often includes far more repairs than a modern bike. On this episode of HS/LS, the guys discuss what to expect from these old machines, and if the upside outmatches the downside of it all.

This year may very well be the best year, ever, to procure a used motorcycle. The guys talk about all the reasons why, and Spug interviews the one-and-only Ari Henning in this edition of Highside/Lowside.

Whether it's motorcycles or movies (and everything in-between), mid-December is the time to start looking back at the 350-ish days prior and evaluate the good, the bad, and the things we are amped to see in the 370-ish days before we get to do it all again the following year.

Everyone's got an opinion, and that's what makes it fun! In this episode, Lemmy, Spurgeon, and Joe take to task the question of bad motorcycles vs. bad matches between motorcycles and riders.

HS/LS: S2 E2 - Do you care where your motorcycle is made? BONUS: Chris Fillmore interview!

Does "Made in..." matter anymore? It's a question that stirs emotion, but perhaps it's just that, emotion. Times and technology have changed a lot about the world, and in this episode, the guys debate whether or not a motorcycle's geography of origin makes a difference. And in this week's interview, Spurgeon sits down with Pikes Peak legend Chris Fillmore to talk about some of the controversial decisions made regarding motorcycles at the event.

HS/LS: S2 E1 - Are you a REAL motorcyclist? And an interview with RyanF9!

The first episode of our second season of Highside/Lowside saw the introduction of a new, extended format, as well as one of the most often debated topics in moto-circles: What makes a motorcyclist a motorcyclist? On the outside, it seems pretty straightforward. “Do they ride a motorcycle?” But, as the guys get into, when you dive a bit deeper, there are plenty of nuances and “what if…” scenarios to consider. Also, big shout out to RyanF9! He’s a rad dude, with a great story, and we were stoked for his interview.

It’s no secret, the American market for motorcycles has seen more lucrative days. Is it due to a more safety-focused citizenry? Are there more engrossing digital alternatives in 2019? What’s the deal with it all, and just as importantly, do you care? The guys discuss it all, and question how much it could impact those of us who make our way on two wheels.

Everyone has been so concerned with the question of whether electric motorcycles will be “good enough” that they haven’t asked the bigger question of “will they be too good?” It’s a legitimate possibility. And if technology has taught us anything so far it is that we should never cease to be amazed at just how relentless it is in its progress. In this episode, the guys discuss what an electric revolution might mean for today’s motorcycles.

Having options is generally thought of as being a good thing. But is it always and without exception? The past few years have seen a proliferation of motorcycle types as manufacturers try to maximize their sales across all markets. It’s a pretty good reason, but the guys are left to wonder what it might mean for the industry as a whole.

If you ride a lot, you’ve undoubtedly heard it: ATGATT (All The Gear, All The Time). You also probably have a strong preference for either side of the equation. Though gear is a great safety measure, is it really the government’s job to require riders to wear it when they swing a leg over their machines?

Technology touches every facet of our lives. For the most part, it’s been a really cool thing. But has it gone too far in motorcycles? We can go faster, farther, with more comfort, and more safely than ever before, but in doing so have we lost at least a little bit of what it is to ride a motorcycle in the first place? Maybe, but then again, maybe not.

How is it that we can care about something so much that is made of basically the same materials as our kitchen toaster? Lemmy, Spurg, and Joe discuss whether or not character is inherent in a motorcycle from the moment it is manufactured, or if that tug on your heartstrings that you feel upon ignition is only cultivated with time in the saddle.

Racing motorcycles is an expensive, time-consuming, and effort-exuding hobby. But it is also an absolutely enlivening experience. In a modern world saturated with copious amounts of dopamine-inducing screen time, is there still a place for the visceral, adrenaline-pumping experience of racing a motorcycle in reality?

It’s an age-old question; binary, yes or no? But it’s really not that simple. When it comes to the size of a motorcycle, it all comes down to what exactly a rider intends to get out of it. In this episode Lemmy, Spurg, and Joe tackle the topic and look to dispel common misconceptions about small bikes.

They are still the most popular style of motorcycles on the road in the United States, for better, or for worse. Everyone has an opinion on cruisers, and the Highside/Lowside guys are no different.

2018 was gone in a blink. But that doesn’t mean the moto-ongoings won’t have an impact on the industry for years to come.

When it comes to motorcycle news, there are few places where it drops like on the EICMA floor. As one of the most important motorcycle shows of the year, the 2018 version provided Lemmy, Spurg, and Joe plenty to talk about in this episode.

The Triumph Scrambler 1200 has gotten a lot of love since it was announced, and all the talk made Lemmy and Joe ruminate on the history, style, and future of the “scrambler” classification as a whole.

We hope you found something you liked and enjoyed listening to. We’ll continue to keep this page updated with the most recent releases as they become available, but you can also subscribe directly to our podcast via your favorite platform to be notified when we release new content. The choice is yours.

If you dig us, give us a good review or leave a comment on your favorite podcast platform. We’d love to hear from you and, as always, are looking forward to keeping the conversation going.