Video: How motorcycle engines are swapped into cars

Recently, when Suzuki’s new Hayabusa appeared, some of the comments turned to swapping its engine into small cars.

‘Busa-swapping Smart cars/kei cars is just as much a part of the bike’s mythos as the peregrine falcon, the stretch ‘n’ slam crowd, and the so-called “speed wars.” In fact, there’s never been a better time to put supersport power in your subcompact, and I’d like to take a closer look at this counterintuitive modding scene.

One of the best bike/car combos I’ve seen is Matt Brown’s 1964 Honda S600, which was purchased as a rolling project and modified to accept a CBR1000RR engine. I'll let Matt do the talking on this one.

Matt's video answered most of my questions with this build, although I'd have liked to see more of his shifter arrangement. I definitely approve of the Honda-in-a-Honda purity here. (The stock S600 actually used a clever chain-drive system to send power to the rear wheels in another nod to motorcycling.)  In his interview and test drive for Jay Leno's Garage, Matt jokes that his S600/S1000 is more motorcycle than car, simply because used bike parts are relatively cheap for the performance they provide. A complete engine and transmission, including wiring and all the power that little car will ever need, all for $1,000? It's a compelling, if unconventional, direction for anyone modifying small cars.

Motorcyclists have more of a role in this cottage industry than they realize. Matt's engine came out of "some wrecked bike" that didn't sustain any engine damage. Sport machines often live short, destructive lives, so it's not as though Matt's build deprived a usable CBR of its powerplant. Instead, it gets loved and abused in an entirely new way. Did I mention he runs nitrous?

Later, Matt tried to build his S1000 into a hybrid. The main reason behind this move? Reverse gear! One of the major challenges with using a motorcycle engine in your car is backing up, because only a handful of motorcycles have any kind of reverse accommodations, and the few that do, like the Gold Wing, aren’t very popular donors for this kind of thing. The hybrid system used a similar controller to what you’d find in a Zero motorcycle, with the juice coming from a hacked Chevy Volt battery, but the final result only made it a few hundred miles before Matt removed it, having decided it just wasn’t earning its keep.

I think my favorite part of these swaps is that confusing sport bike exhaust note coming from such an unexpected place. It’s like when the wrong engine sounds are dubbed into a movie, except this isn't Mission: Impossible Fallout or (dare I mention it) Torque.

A parting thought: if motorcycles can have car engines in them, there ought to be some reciprocity, right? Bikes like the Boss Hoss (small block Chevy), Amazonas (VW Beetle), Münch Mammut (NSU inline four), and the strange Gelbke creations come to mind. I know which combo I'd rather have.

Video: A motorcycle with a Lamborghini V-12? Lance Oliver 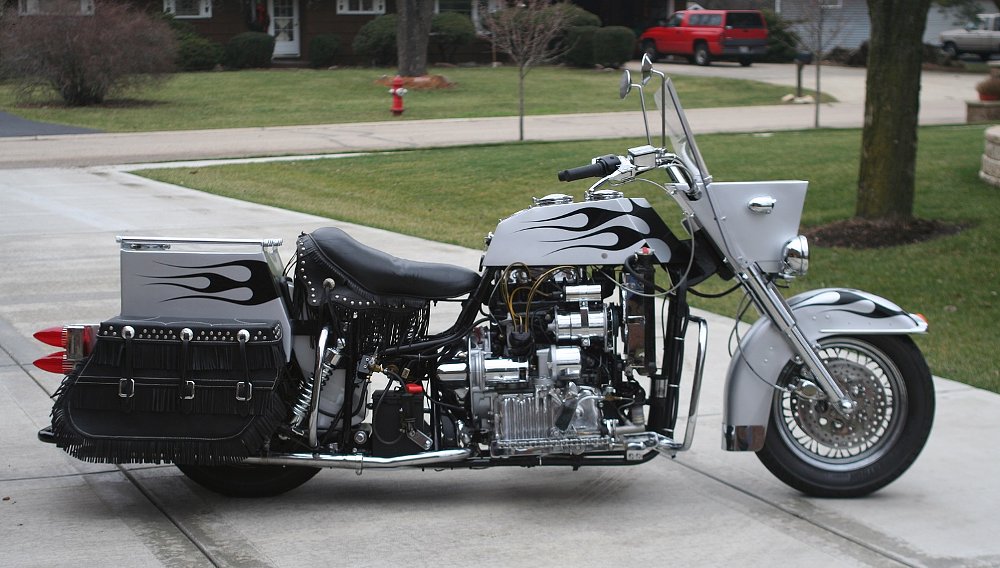