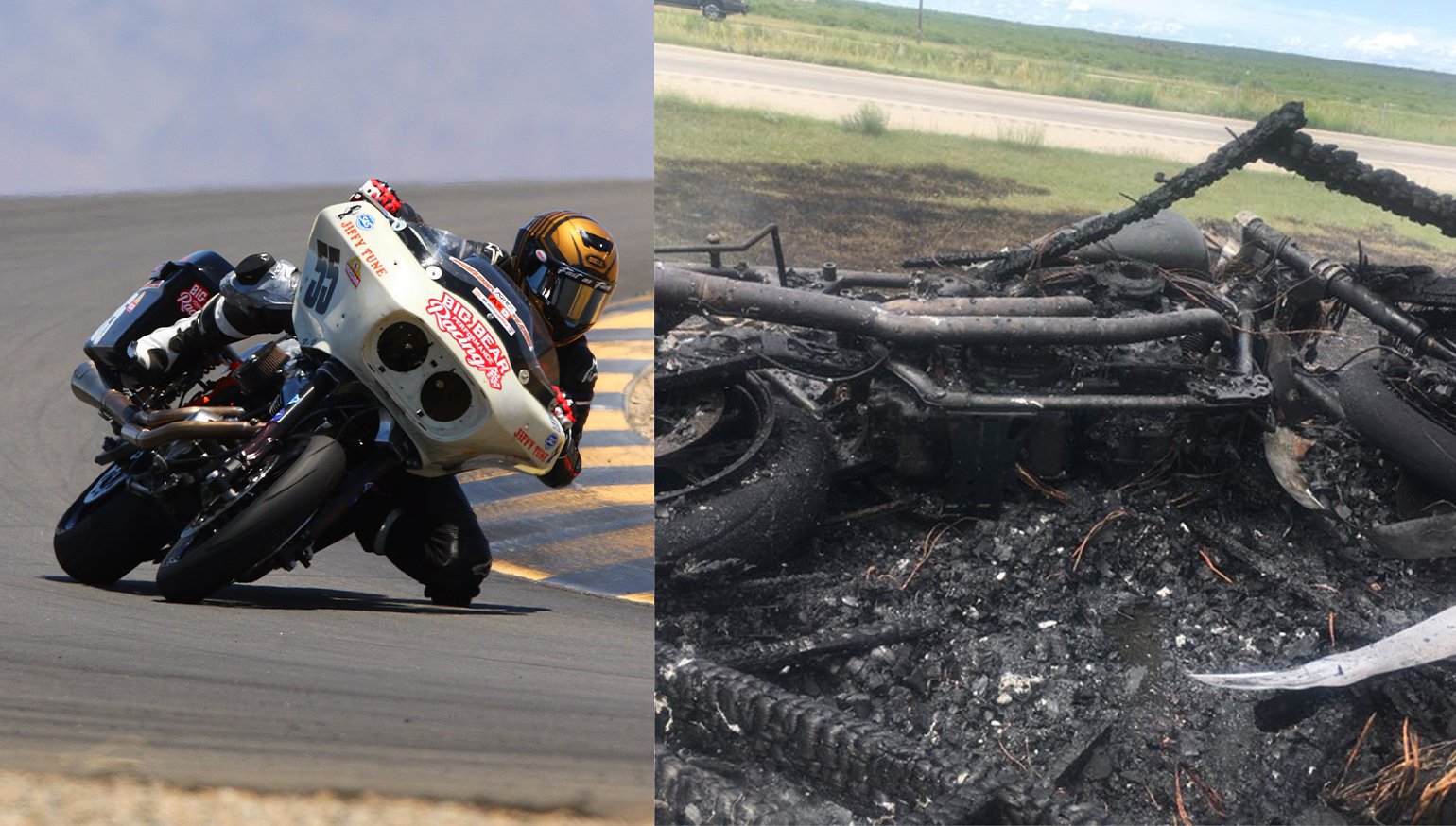 With a lot of help, racer-builder tries to make Sunday's race after devastating fire

A week before the second race of MotoAmerica’s Mission King of the Baggers series, racer Eric Stahl learned that his race bike, truck, and trailer burned to the ground after the truck’s transmission failed.

His father was driving the race bike from California to Road America in Wisconsin so Stahl could take care of his custom shop, Jiffy Tune, in Lake Elsinore. The truck fire outlasted three fire extinguishers and destroyed the entire rig before firefighters could arrive. Thankfully, no one was injured. At this point, a privateer racer would be forgiven for calling the weekend, if not the entire three-race season, a complete loss.

But not Stahl. He’s still planning to line up on the grid after friends, fans, and sponsors rallied around him. Harley-Davidson said they’d provide a replacement Electra Glide if Stahl could get to Milwaukee by Wednesday. The determined racer and his stash of spare race parts were in the air by Tuesday.

Local dealership House of Harley offered shop space, a bike lift, and techs to help with assembly. Lyndall Brakes overnighted rims and rotors, plus an essential sprocket and chain conversion kit. Stahl took a short break from fabricating rearsets to tell Common Tread about his build, the upcoming race, and what drives him to keep going after his staggering setback.

“We’re building the wheels and getting the rearsets together while we wait for Harley to call about the replacement bike,” Stahl explained. “I brought parts off other bikes so we’re getting ready to start building the new one as soon as it gets here.”

The King of the Baggers series allows for plenty of modifications with a few key restrictions, like hard bags, a fairing, and a minimum weight of 635 pounds. Stahl’s major modifications over the next day focus on braking, suspension, and the swingarm. “We need to get this bike to turn and stop,” he laughed. Big Bear Performance also sent a care package full of go-fast parts he’ll need on the track.

Both Stahl and his sponsors have shown incredible commitment to this nascent race class. What is it about King of the Baggers that brings this enthusiasm?

“I’m a bike builder, I own a custom shop, and the fact that we get to go out and showcase what we build means the world to me," Stahl said. "We’re out here with the bigger players. Not every little shop out there is racing against factory teams. It means the world to keep coming to these races.”

Stahl will be happiest if his number 55 Electra Glide gives hope to the common man watching the race from the stands or on TV. “For that reason, I don’t want to give up," he said. "We’re fighters. It’s gonna take a lot to get rid of us!”

Stahl believes the performance bagger scene is here to stay, too. Heavily modified Harleys and Indians became popular to the point of inspiring this entire race series, which showcases the nth degree of bagger tuning and riding. “We have to transition into the new era of Harley riders," Stahl says. “This new generation likes racing and going fast! Lots of riders in their 20s and 30s have some dirt background, they like the excitement and the performance aspect.”

Building a performance bagger is a serious undertaking, though. It took Stahl 90 days to build his last race bike, which he bought on March 12. Now, he’ll have to do it again in less than three days. His experience last season with the LA Art Team bike helped him dial in his preferences, including his signature high rearsets, and the details of the recent build are still fresh in his mind. For Stahl, his first season on his own bagger has been about learning, first and foremost, and he’s certainly learned that his friends and fans have his back.

“Between the race community, and the H-D community, and my customers that helped out through GoFundMe... I’m at a loss for words,” he said. “I never expected so much support."

Right now, Stahl’s probably in that Milwaukee shop bay, racing against time before he can race against his competitors. This is the stuff of motorsports magic, and Stahl’s already won something if he’s out on the grid this weekend, no matter what happens.

“It’s been such an emotional rollercoaster this week for me," he told me before getting back to wrenching. “When I got the call from Harley, I broke down in tears with my wife. It’s always been a dream of mine to race at this level on American iron, and I’m doing it.”

Stahl is fully focused on Sunday's race right now, but even with a fresh race bike, his troubles aren’t over.

“My truck is gone,” he says. “When I get back to California, I’ve got to find some way to work! Well... we’ll worry about that next week.”

Watch the King of the Baggers race at MotoAmerica on Sunday live on FS2 at 12:30 Eastern after qualifying on Friday and Saturday, and look for the number 55 Electra Glide on the starting grid. 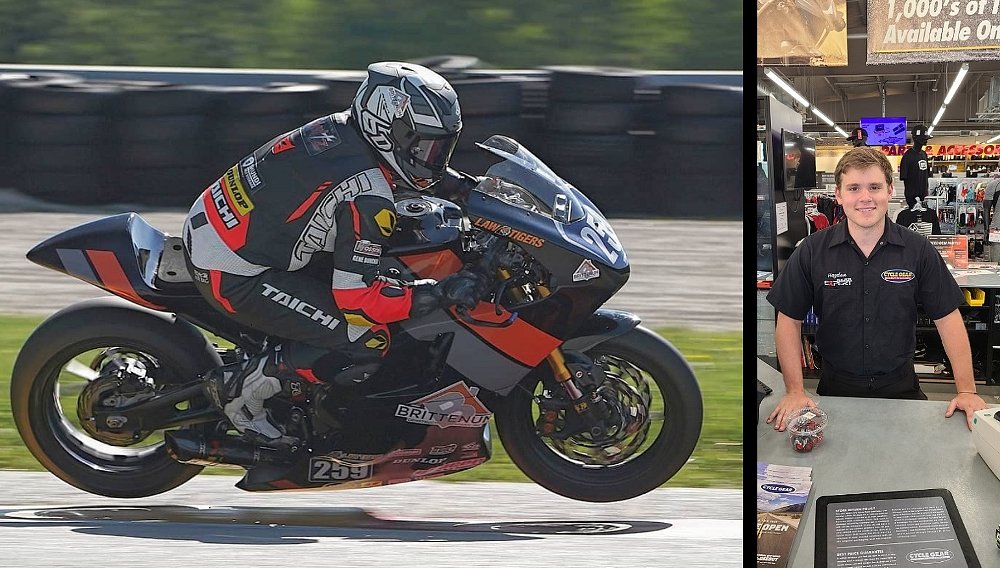 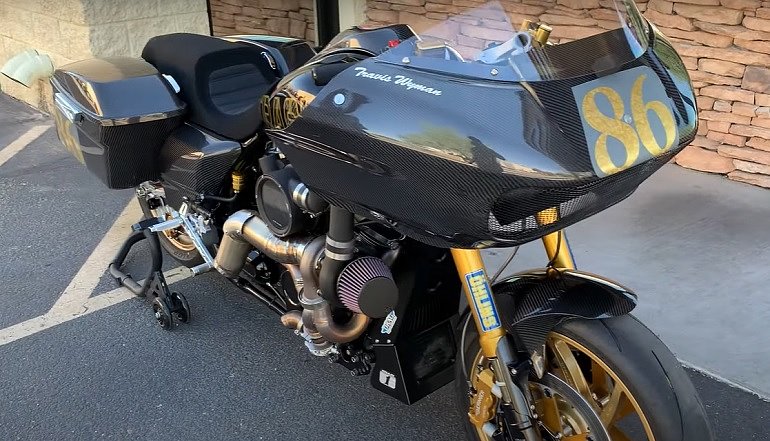