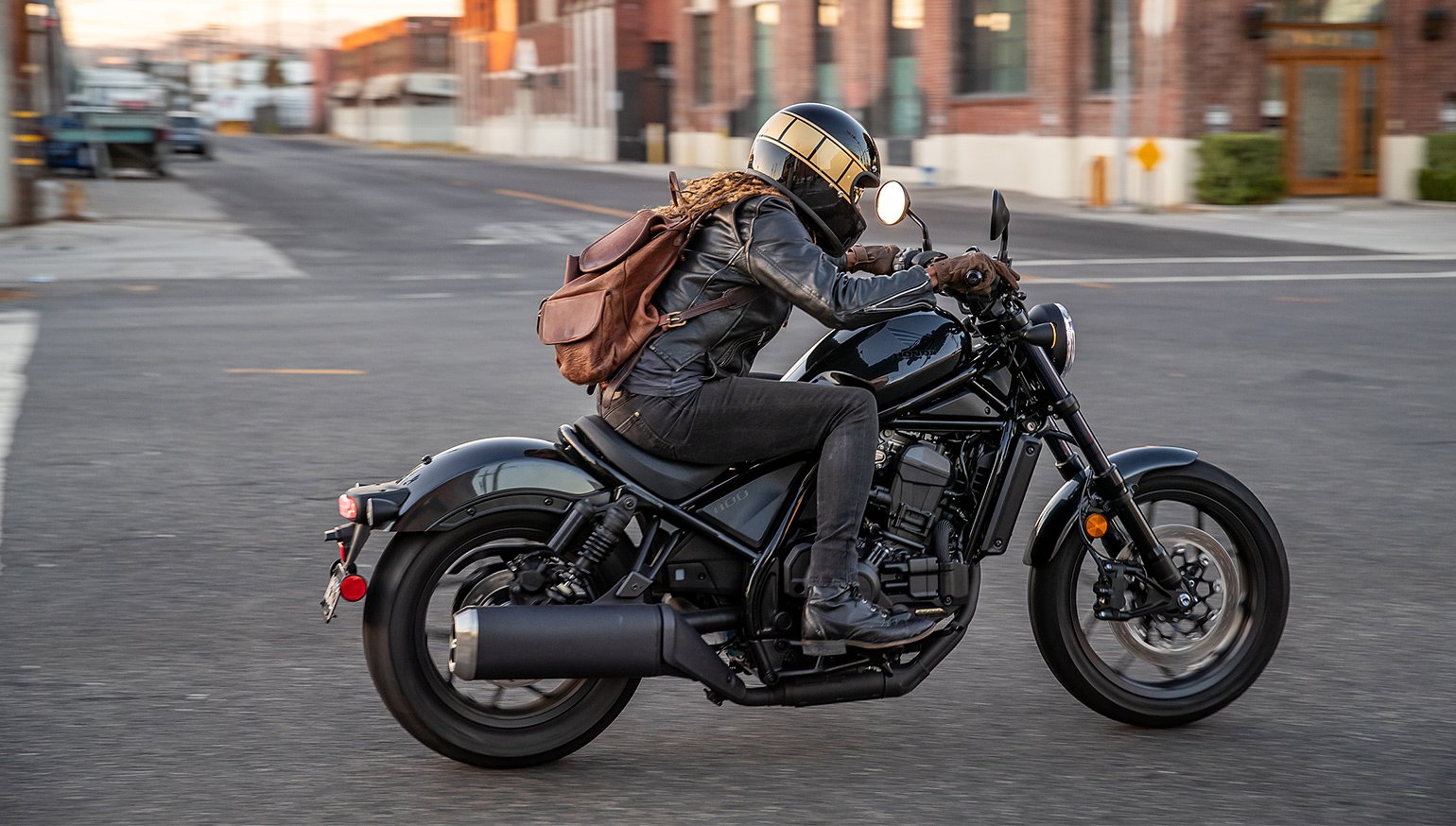 If you haven’t noticed, modular platforming is the name of the game when developing new motorcycle models outside of racing, and it’s been that way for a while.

Using one engine (and maybe a chassis, too) for multiple motorcycles is an awfully efficient way to build out your range of motorcycles, and those cost savings follow the platformed bikes from the factory floor to the price tag to the service department at your local dealership.

Sometimes platforming results in bikes that would never have come to be if the designers started with a fresh sheet of paper. The Rebel 1100 looks like a prime example with its 1,084 cc parallel twin from the newly revised Africa Twin 1100. (Concept models have hinted at a cafe-styled bike also based on this p-twin.) This is the biggest, baddest production Rebel ever.

“With the evolution of cruiser culture, today’s rider demands a motorcycle that expands on the capabilities that have traditionally been possible in the segment,” said Lee Edmunds, Senior Manager of Powersports Marketing for American Honda. “The all-new Rebel 1100 fits the bill, providing cruiser customers with technologies — including DCT — and riding experiences that were previously unavailable in the category. It’s truly a motorcycle for the modern cruiser rider.”

The Rebel name is synonymous with friendly beginner bikes and has been for decades. The 1100 might not be the best beginner bike, but it does have some features that will channel the approachable character that has defined the Rebel line for so long. (This bike is such a departure from traditional Rebels that I’d have called it something else!)

First, and most obvious, is the optional dual clutch transmission, or DCT. We’ve enjoyed the benefits of this system on the Africa Twin 1000 and 1100, from gridlocked traffic to technical trails. DCT will make the Rebel an excellent choice for urban riding, or for riders who don’t want to be pulling a clutch and changing gears for any number of reasons. Those who choose the base six-speed manual transmission get a slip/assist clutch to ease those gear changes.

The engine itself is a retuned version of the Africa Twin 1100 with three riding modes (Sport, Standard, Rain) and cruise control. And check this out: The big Rebel uses “different camshaft profiles and ignition timing for each [cylinder]... One cylinder produces slightly more power below 4,000 rpm, and the other more above 4,000 rpm. Along with the 270-degree crankshaft, the result is a unique power pulse and feel.”

The big Rebel gets a new steel trellis frame with a 27.5-inch seat height; almost anyone will be able to reach the ground from the cockpit. There’s a 43 mm conventional fork, remote reservoir piggyback shocks in the rear, and a 35-degree bank angle. The Rebel 1100 weighs in at 487 pounds wet, or 509 with the DCT. The Rebel's closest competition is probably the heavier and more expensive Indian Scout, although the Scout is much closer to a traditional cruiser in its appearance, and that's a big deal in this segment.

The Rebel 1100 will be a controversial option in the U.S. cruiser market. It’s not American, it’s not a V-twin, it’s liquid-cooled, it’s got almost 90 horsepower, it has an optional dual-clutch transmission, it costs about as much as a Harley-Davidson Sportster 883, and it’s made by Honda, for crying out loud. This is Grade-A haterbike material, and Honda knows it.

"The Rebel 1100 makes way more power (nearly 50 percent more) than some of the 'traditional' cruisers out there" and is “capable not just of straight-line cruising, but also more dynamic riding, including brisk acceleration and exhilarating cornering.” Strong words from the same folks who brought us the small Rebels, the docile Shadow 750, and the Fury.

The new Rebel 1100 is an exercise in platforming, no doubt. It’s also evidence of Honda’s commitment to building accessible bikes for “a variety of rider types,” as well as a counterpoint to the traditional cruisers on the market today.