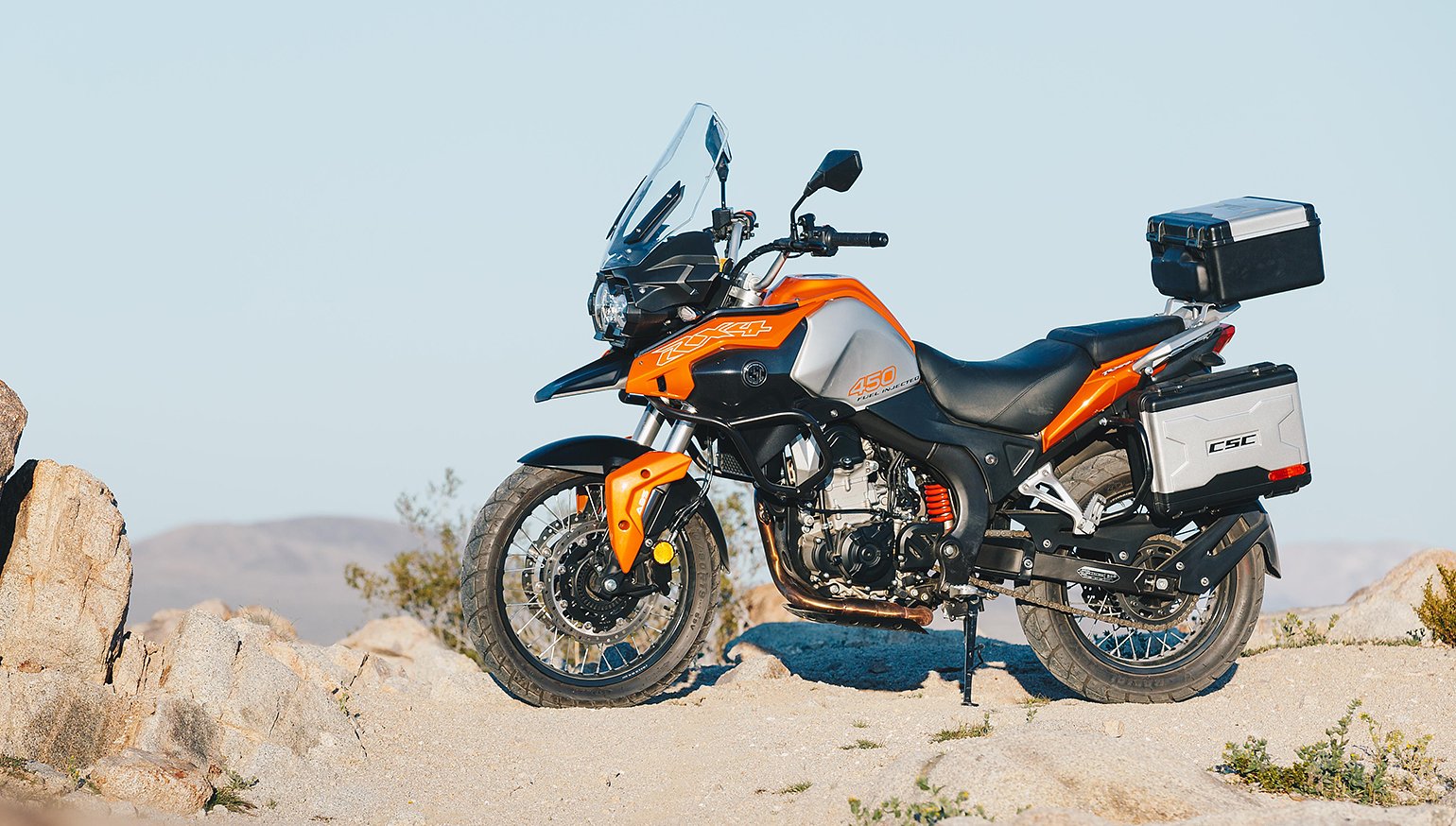 As a guy who enjoys everything from long-distance touring to attacking a twisty road to motocamping on a mountaintop, the idea of a versatile, do-it-all adventure bike makes a lot of sense to me.

If I had my way, there’d be a key to a BMW R 1200 GS or a Honda Africa Twin in my pocket, but neither my bank account nor my garage can afford that size dent. I’m sure plenty of you can relate.

Which brings us to the 450 cc CSC RX4. It’s a bike that a Swiss Army knife-carrying cheapskate like me can’t help but be curious about. On paper, it’s got nearly as many bells and whistles (“farkles,” in ADV speak) as a premium-trim machine from Europe or Japan. Except it’s made in China by Zongshen and costs $4,995 (well, $5,395, including the $400 prep and destination charge; there’s a similar cost for any new bike), which includes shipping to your door from CSC’s store in Azusa, California.

The bike rolls off the truck ready to ride — it’ll even have some gas in it — so all you have to do is stick the key in and go. Is it too good to be true? I lived with the bike for a week and logged more than 600 miles to find out.

Far and away the most appealing aspect of the RX4 is its price-to-features ratio. It’s unmatched anywhere in motorcycling.

Fifty(ish) Benjamins gets you a modern fuel-injected, liquid-cooled single that’s good for a claimed 40 horsepower, hung in a twin-spar chassis with 19/17-inch wheels, an inverted adjustable fork, and linkage rear suspension that’s also adjustable. There’s seating for two (with a caveat), an adjustable windscreen, radial brakes with switchable ABS, power outlets, a 300W stator to power your heated gear, front and rear crash bars, a steel skid plate, over 60 liters of lockable luggage, LED lighting, a generous 5.3-gallon tank, two-year warranty, and a laundry list of other appealing specs. For five grand!

Another thing that’s appealing is the RX4’s reasonable size. While many ADVs sport a high seat height and an even higher curb weight, the CSC has a reasonable 31.9-inch perch and a claimed 450-pound wet weight that average-size people can manage.

Functionally, the CSC is a mixed bag, with a few big surprises.

As an urban bop-about, I expected the RX4 to perform well. Unfortunately, it suffers from a lack of refinement that makes it frustrating to ride around town. Clutch feel is vague, with a narrow engagement zone. Combine that with a clunky transmission and throttle response that can only be described as awful, and I found myself either stalling or making jerky, I-just-got-my-license starts more often than I care to admit. Mark that down as surprise number one.

Thankfully, the RX4 is a totally different experience on the open road. My first stint was a 100-mile highway slog out into Southern California’s high desert, luggage stuffed with camping kit for a multi-day foray. The ability to inhale miles is a key aspect of any ADV, and the CSC does it well. Really well, actually. That’s surprise number two.

For starters, the riding position and aerodynamics are excellent for my height of five feet, 10 inches and airflow was smooth and quiet around my head and torso, even with a billed ADV helmet. The seat is wide and firm, and legitimately all-day comfortable.

Then there’s the engine, which I assumed would struggle on the highway and vibrate like a palm sander. Cue surprise number three. The motor is well balanced and cruises along at an indicated 70 mph with 7,250 rpm on the analog tach and barely a whisper of low-frequency buzz in the grips and pegs. The RX4 will sprint up to 80 mph for a pass easily enough, with a top speed somewhere in the vicinity of 90 mph, despite having a few thousand more rpm to go before the abrupt rev limiter kicks in at 10,000 rpm.

Mercifully, the fueling isn’t an issue on the highway, and with an average fuel economy of 49 mpg, you can net a solid 250 miles from a tank. With range and comfort like that, as well as standard luggage capable of holding a weekend’s worth of stuff, the RX4 actually makes a lot of sense as a touring bike.

Another surprise is how firm the suspension is. So firm, in fact, that I backed out the rebound adjusters (there’s no compression adjustment) to free up movement. For lighter riders, the stiff springs may feel harsh, but at 175 pounds and with somewhere around 60 pounds of luggage on the back of the bike, I appreciated the extra support, and the setup is a big departure from the too-soft chassis on pretty much every other bike in the small-ADV category.

On a flowing back road, the CSC engine’s quick-revving character is fun to exercise, and handling is responsive and stable enough to make attacking apexes enjoyable. Bolted to the RX4’s 19-inch front wheel are two “large diameter” (CSC's specs aren't more specific) discs clamped by four-piston radial calipers. There’s plenty of power available if you really bear down on the lever, but don’t expect much in the way of feel. Similarly, the ABS works, but intervention is intrusive and crude.

As far as hauling you and your camping equipment to a remote campsite, the RX4 does fine as long you stick to relatively smooth hardpack roads and trails. In other words, don’t take it anywhere you wouldn’t go in a Honda Civic.

Of course I did, because I love a ridiculous challenge, and what good is an evaluation if you don’t push the limits? So over the course of two days the CSC and I wallowed across open desert, clambered up rocky ascents, and even crossed a snow-spattered summit on what was labeled the “most difficult” route in the OHV park.

I’ll spare you the curse- and sweat-soaked details, but it was a real struggle. The street-biased CST tires don’t have much purchase on loose surfaces, and the bike feels like it carries a lot of weight over the front end, so small front-tire smears that wouldn’t require any reaction on most bikes demand immediate corrective action on the CSC. Knobbies would certainly improve the bike’s off-road capabilities, and CSC offers more aggressive tires for those who are interested.

Clutch-engagement and throttle-response issues return with a vengeance off-road, where precision and clutch finesse are critical. I eventually adopted a technique familiar to 125 cc two-stroke riders: Pin the throttle and torture the clutch plates to modulate power. To the clutch’s credit, it didn’t fade, but the radiator fan sure did run a lot.

Dropping the bike (repeatedly) revealed the durability of the steel crash bars, which protected the fairings and side cases from major damage. That tall, backswept steel handlebar likes to fold when the bike falls over, but it’s malleable enough that you can correct its curvature with a swift kick.

As difficult as my off-road excursion was (my riding partners, Zack and Spenser, on more capable machines, struggled a bit as well) and as many times as I threw the CSC at the earth, nothing actually broke besides a mirror. So if you’re worried about the RX4 disintegrating when the riding gets rough, don’t sweat it.

Circling back to those features

Since the RX4’s features are such a selling point, I spent a lot of time thinking about them. After all, what good is a sweet multi-tool if the knife blade is dull and the screwdriver tips are misshapen?

There are some clear misses. Namely the high-effort threaded windshield adjuster (which will come off in your hand if you keep unthreading it) and the fact that if you tilt the screen all the way back the mirrors smack into the glass when you turn the handlebar. The ABS switch (a $45 accessory) requires a secret handshake that I never figured out, even with a CSC tech’s instructions, and the dash, while comprehensive, has turn-signal and high-beam indicator lights so dim as to be useless during the day. If you ride an RX4, get used to your buddies clowning you for leaving your signals on. “Still waiting for that left turn, eh?”

The luggage is largely great. The side cases and top box are included in the base price, for starters, and they’re far sturdier than some accessory options from Japanese manufacturers (specifically the $440 cases Kawasaki offers for the Versys-X). The CSC luggage is also keyed to the ignition and you have the option to upgrade to aluminum “Tourfella” cases for an additional $425 at the time of purchase.

My two complaints regarding the luggage are that you can’t leave them unlocked, necessitating the ignition key any time you want access, and since the latch is exposed within each bag, you have to pack carefully to avoid snagging it on something. I spent a lot of time poking at the contents of the overstuffed cases trying to get the latches to lock.

Items that are definite wins are the USB outlet and cigarette-lighter socket on the dash, which allowed me to keep my phone and accessories charged and run my mini compressor when I got a flat. That LED headlight, while seemingly a violation of BMW trademark, casts an incredibly broad and bright beam across a dark road, and I love the fact that the bike has a gear-position indicator and hazard lights. The crash bars also did their job remarkably well, as previously mentioned.

Among the RX4’s long list of features, one thing is lacking: extended service intervals. For those who grew up in the 1960s, the 2,500-mile oil change and 5,000-mile valve clearance schedules won’t seem bizarre, but for folks accustomed to modern service intervals, the CSC may seem needy.

In response, CSC offers comprehensive maintenance tutorials on its website, and keeps all maintenance and repair parts in stock and ready to ship. And parts are cheap. We’re talking $15 for a mirror, $48 for a handlebar, and $13 for a rear brake pedal. I dropped the bike a lot (though not as many times as I stalled it!) and only tallied a $62 repair bill, not including scratches, which, like scars, only add character.

To further assuage concerns, the RX4 comes with a two-year, unlimited-mile warranty that covers parts and labor for the first year and parts only for the second year. There’s no dealer network, but there’s a forum full of Zongshen owners who sing praise for CSC’s customer support and generosity. There are stories of parts being overnighted, service being lined up at far-flung independent shops, and engine swaps — actual engine swaps — being performed free of charge for a road-tripping rider.

As it turns out, one of my fellow Zillans, Rania Linderman, owns a 250 cc 2016 RX3 (that she bought with winnings from a RevZilla chili cookoff competition!) that she adores. “There are cheap parts on it, sure, but for the cost, if you just want a bike that you can have fun with, it’s a great investment,” she told me.

And the same can be said for the RX4. It’s certainly not as refined as machines from Japan’s Big Four and it has some shortcomings you’re not going to get with a name-brand bike, but there isn’t a motorcycle on the market that offers so much for so little. So if you want a cheap, sport-touring bike that’s all-day comfortable, the RX4 is a decent choice. But if your adventures are more off-road-oriented or precision is important to you, then you’re probably better off with something else, even if it means buying used or spending more money. 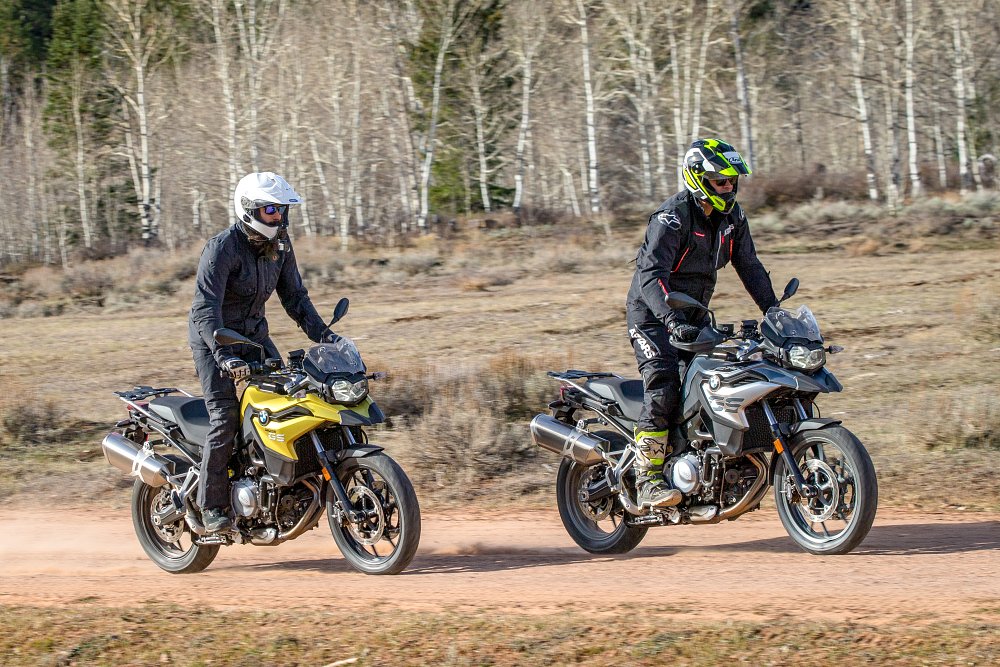 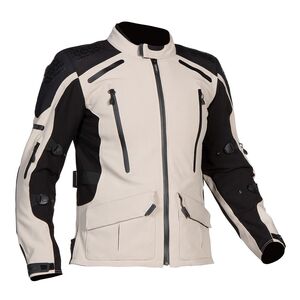 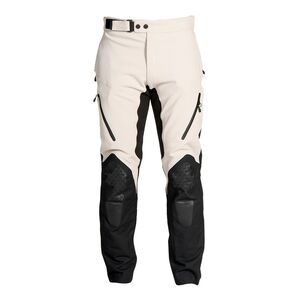 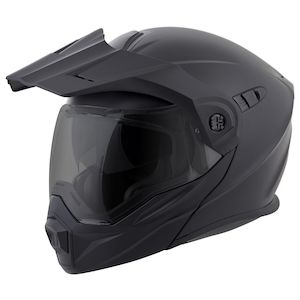 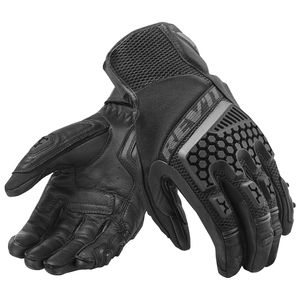 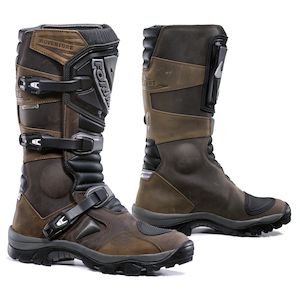 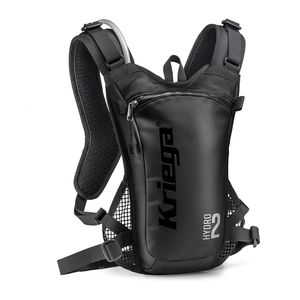