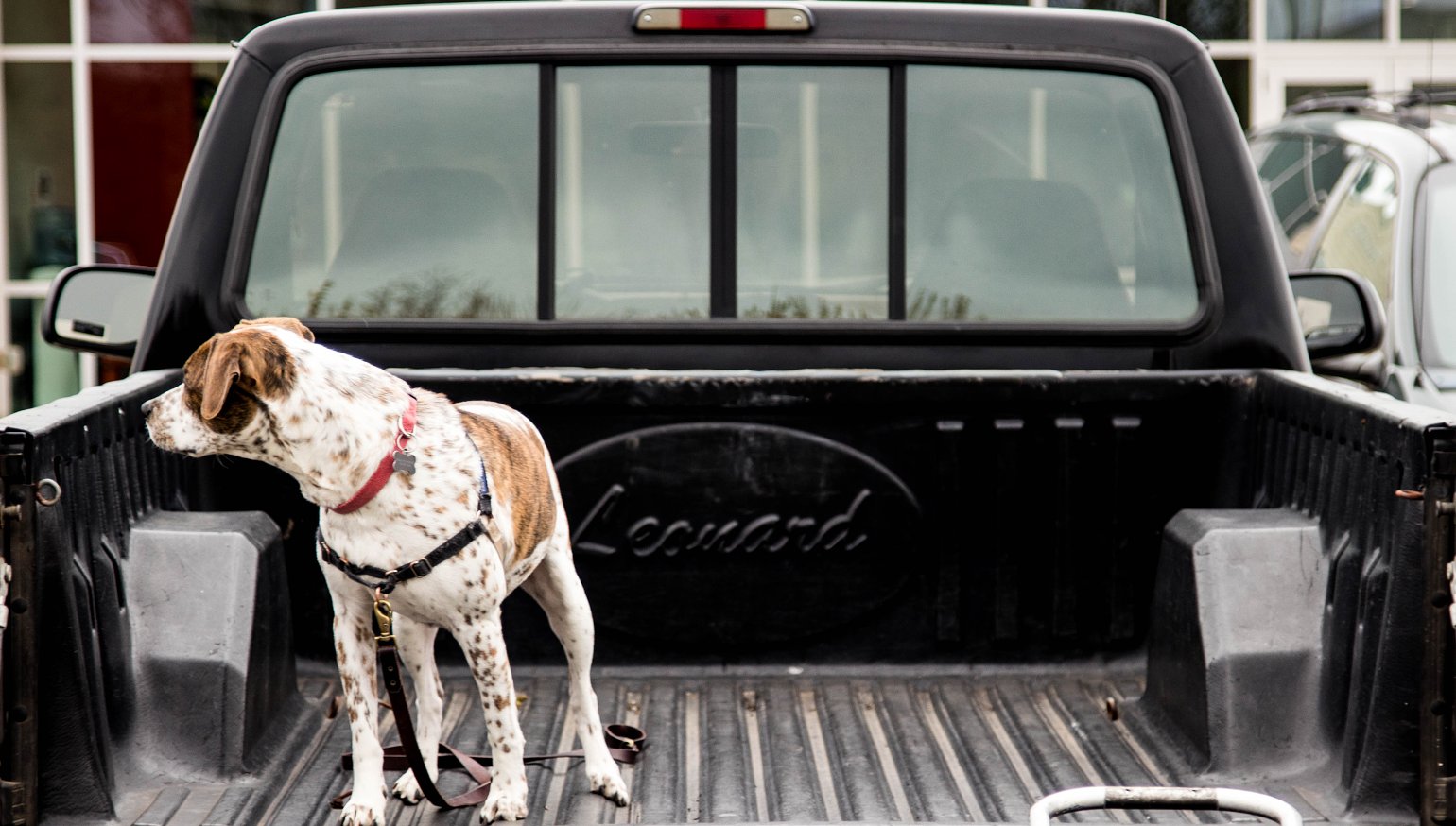 What motorcyclists really need from a pickup truck

Andy recently wrote an article on the new GMC Carbon Pro bed. It looks sweet. I personally love most of the design, and it goes hand in hand with the “tailgate wars” that are playing out at present. If none of this makes any sense to you, check out this video on how the GMC gate works, because I’m gonna discuss both the bed from the article and the gate from the video. (I promise, this actually does have something to do with motorcycles. Just stick with me here.)

At first blush, I loved it. And then I realized it actually kind of isn’t that great. From the motorcyclist’s perspective, this bed (and that neat tailgate) are wrong.

Why you should listen to what Lem-lem thinks about trucks

Short yet accurate answer: I know a lot about trucks and motorcycles.

I got my first pick-’em-up truck when I was 20 years old, and after that, I always had one. I worked as a light truck mechanic for many years. My work and play usually includes hauling motorcycles, motorcycle parts, motorcycle gear, and trailers filled with motorcycles. My little hobby/moonlight business of buying, flipping, and trying not to lose money on motorcycles requires a truck seemingly all the time.

Common Tread is a motorcycle site and I am a Motorcycle Guy, but trucks are inextricably intertwined with Motorcycle Stuff. So I asked Lance to let me float this article here because I suspect Common Tread is home to fair number of people like me: I have truck... because motorcycle, whether it's a dirt bike hauled to an off-road riding area, a sick bike being hauled in for repair, or a race bike going to the track. (Let’s save a lie and tell the truth: Part of why I am writing about trucks is because I ain’t doing a hell of a lot with motorcycles at the moment, thanks to that last scenario.)

Why I loved this bed idea at first

So now you know why I’m a Good Truck Guy. Back to the GMC. This new bed should be perfect for riders like us, right? I love the integrated wheel chocks. The tiedown hooks integrated with the header rail will prevent the debut of one more potential product from the next SEMA show. I appreciate a non-steel box. (Although guys? Uh, this isn’t revolutionary. Five of my Toyota Tacomas had composite boxes, starting from back when Bush was in office.) And that MultiPro tailgate? I could, in theory, open my power tailgate, flip down my tailgate step (very nice!) and walk my bike up its ramp and strap it down. I'd load the ramp, then flip up the load stop on the tailgate so my ramp and my cooler wouldn’t just fly out.

I’m not geriatric, these trucks are huge

I’ve struggled loading my pickup trucks as time has worn on. I used to be able to put damn near anything in the bed of my truck and haul it around, but I’ve had so much trouble doing that lately. I thought maybe I was just getting older, but shouldn’t I have at least my first prostate exam before I wonder that?

I’m not appreciably less spry. It’s harder to load these new trucks because they are growing in every dimension. It explains why I now (literally) have an equestrian mounting block that I use to enter the bed of my truck. A dirt bike stand is 18 inches tall and always has been. I have a harder time loading, because the bikes still weigh the same amount, but they come up the ramp at a steeper angle. And nowadays, I have to get one foot from that 18-inch bike stand to an ever-taller tailgate. The equestrian block splits up the jump into a few different steps, now, and the top step is mercifully higher than a dirt bike stand.

The growth of these trucks explains why Stinky helped me recently put nerf bars on the last late-model truck I picked up, something I've never done in my life. I struggle (at six feet tall) getting into the cab, and Mrs. Lem? Five feet, four inches. I just knelt before the passenger side and let her use my back like a stepstool. High beds make for high stakes when you have your favorite motorcycle on the ramp. Every inch you have to step higher from the dirt bike stand to the tailgate is one more chip you’re gambling. The bet? That you can keep your pretty paint from bouncing off the asphalt.

I can explain this rise in cargo loading height. For most people buying a truck, capability matters a great deal. Horsepower, payload, and towing capacity are demonstrable, empirical capabilities. It doesn’t matter if you will tow a 47,000-pound gooseneck trailer when you're standing in the showroom. It matters that you can. It’s the same as the guy who takes the governor off his ‘Bootha so he can go faster than 186 mph. It doesn’t matter that he won’t. He can.

You can tow and haul more if you have more motor. Now, of course, emissions laws factor into exactly how much oomph a truck can have. Curiously, in this country, vehicles with larger “footprints” (the wheelbase and track of a truck) are allowed to be less efficient. So a standard-cab truck is required to get better fuel mileage than a longer four-door rig. (Dumb, but them's the rules.) This encourages manufacturers to sell the longest and widest versions of a truck possible. Truck width is kind of fixed due to bed dimensions that don’t change too much, but they’re much longer these days, because efficiency standards are much lower on larger trucks. Think about the last time you remember seeing a short-cab, short-box truck. Has it been a while? My beloved eight-foot box is disappearing, because of these huge-ass cabs, which happen to make trucks really expensive. Two feet of cab costs significantly more than two feet of bed. Capability sells, though in this case it’s the ability to combine the functions of both a car (haulin’ people) and a truck (haulin’ stuff).

And Lordy, in 30 or 40 years, power outputs on trucks have doubled (or tripled, in some cases). Capability sells trucks. I can tow a trailer at 90 mph in my modern truck if I feel like it, but to stop a 90 mph truck-’n’-trailer combo, the brakes have to be sort of huge. To clear those brakes, of course, one needs bigger wheels. The "standard" wheel size for trucks has crept from 15 inches to 16, and now it's rare to see a steel wheel under 17 inches in diameter. Taller wheels lead to taller trucks.

My 1977’s bed height was about 29 inches from the ground. My 2018, however, is 39 inches. Now, comparing a 2WD to a 4WD is not completely fair, but a 2WD truck nowadays is not as common as it once was. It’s 2019, baby. To offer big ground clearance numbers and aggressive approach and departure angles for rugged off-road work, the trucks have to be high.

Of course, the Carbon Pro bed and the MultiPro tailgate sure do mitigate much of the tall-and-long-truck headache. GMC could have simply made a composite eight-foot box and called it a day. Wheel indentations, fancy tailgates, and special tie-down points are rendered pretty much frivolous if your whole bike just fits all the way in your bed and the tailgate closes as it is supposed to.

Much like that urban legend about the Russian astronauts using pencils, I think there’s an easier solution for those of us who spend a fair amount of time putting the two-wheelers into bed: smaller trucks.

Why that won’t happen

"My God, Lem," I hear some of you shouting into your phones. "You must be the smartest guy in any room!" It turns out that my very simple idea is tougher than it sounds because of a tax. I have written in the past about tariffs and their effects on motorcycling. And they’re not always bad. Modern pick-'em-up trucks are poorly optimized for motorcycle hauling and that has a lot to do with a very old and very silly tax that slaps a 25 percent tax on foreign-built light trucks. It’s a large part of why that segment has been very, very stagnant over the years.

We could have small trucks if there weren’t a large disincentive for a foreign automaker to bring them here. I’d love to have a world-market diesel Hilux; that’s my ideal bike hauler. It has a "long" box and a small diesel geared towards economy, with a load height that's not offensive. Or perhaps I'd like a little Australian ute. Japan's kei truck would be perfect for a motorcyclist looking to move a dirt bike every now and then who prized maneuverability. Alas, many Americans don’t even know what some of those things are, and if they do, they have no way to purchase them affordably. And it turns out that light trucks are pretty damn profitable, so don’t hold your breath for any of this cool stuff to come along.

The GMC Carbon Pro bed (and the tailgate) have great ideas incorporated into them to make them more appropriate for those of us who spend our lives moving bikes around for work and play. The problem, however, is those great ideas account for a truck that’s built all wrong in the first place for the things most motorcyclists actually do.

I can’t speak for you, but I’d like to see my bed height and my payment both fall just a little. 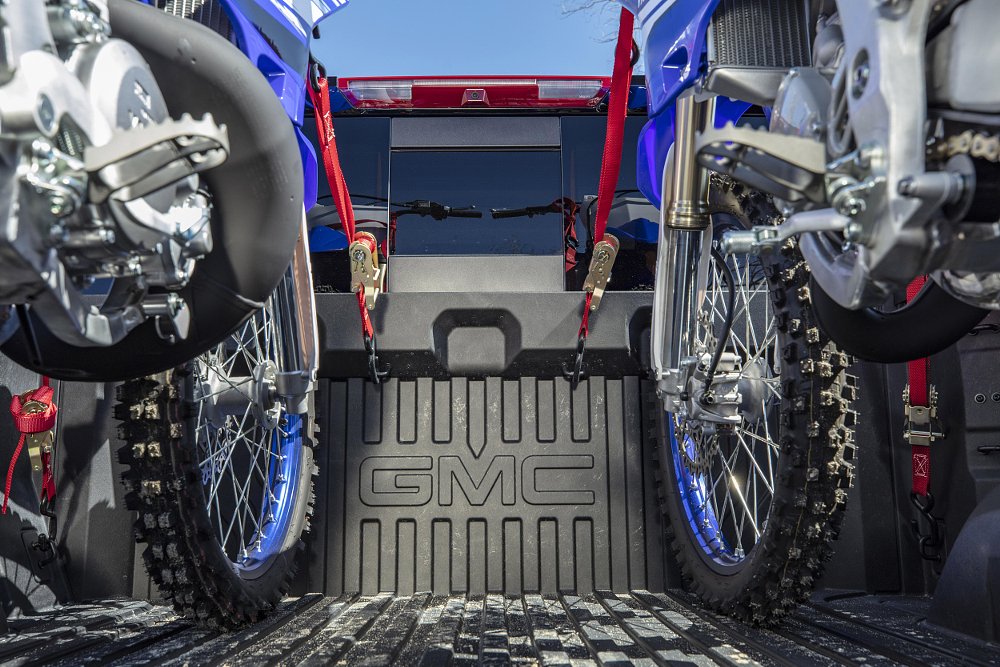 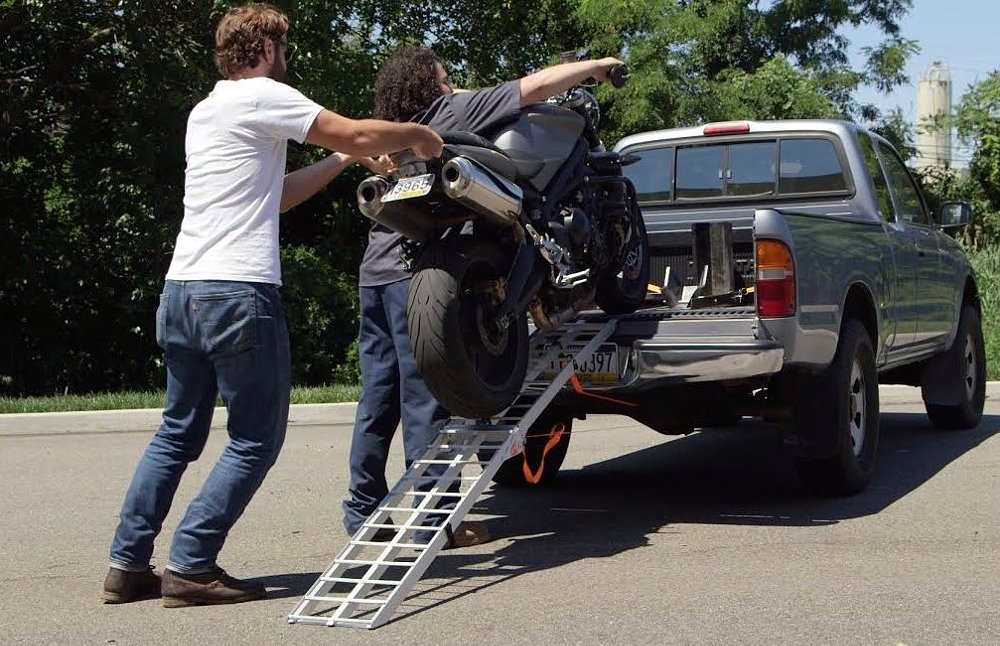 How to load a motorcycle into a truck: Tips and tricks Lemmy