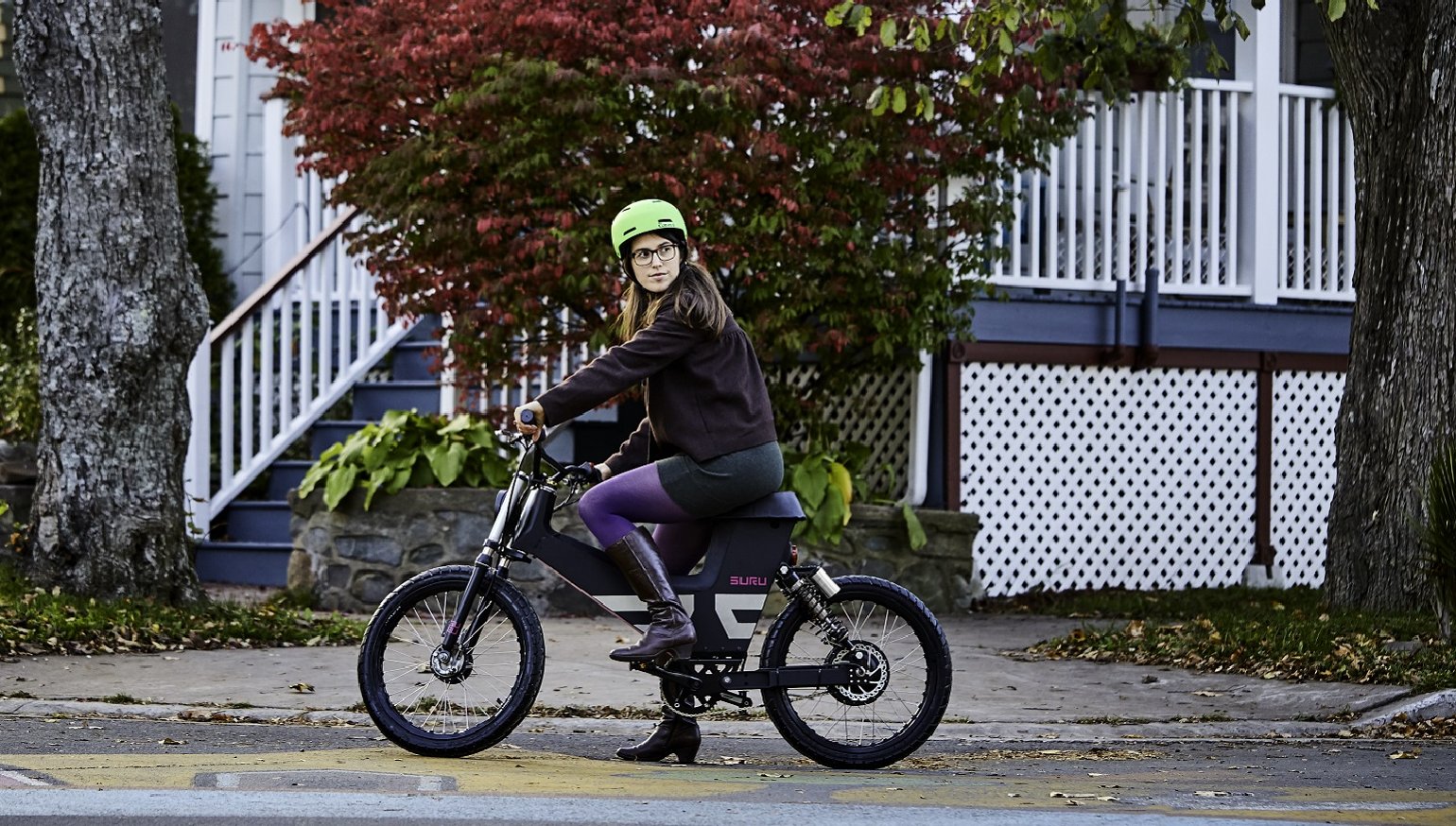 Will this electric bicycle disrupt the motorcycle industry?

Three things popped up in recent weeks that all had something in common: disruption.

First, there was Honda happily telling the world that it had made the 100 millionth Cub. Second, Yamaha released photos of the Niken leaning three-wheeler, and assured us that it was not just a show concept, but was a real model destined for serial production. Third, Michael Uhlarik’s Suru electric bicycle company won a $50,000 SPARK Innovation Challenge, marking it as one of the hottest startups in Atlantic Canada.

The Honda Cub was the last real disruption in the moto industry. It wasn’t really even aimed at motorcyclists, but succeeded in turning millions of us on to ’cycles. Yamaha was going for disruption with the Niken, but judging from motorcyclists’ collective, “Huh?” it’s destined for the same reaction the GTS1000 got. That leaves Suru… is it a Cub for the 21st century?

If Uhlarik ultimately succeeds in disrupting the motorcycle business, he’ll validate the theory of Clayton Christensen, the management guru who wrote “The Innovator's Dilemma” and coined the term “disruptive technology.”

Steve Jobs described Christensen as a profound influence on his work at Apple. The big idea in “The Innovator's Dilemma” is that disruption follows a predictable arc, regardless of the category being disrupted. Christensen studied examples from industries as varied as steel mills and steam shovels to hard drives and transistor radios.

What those examples all had in common was counterintuitive: New technology displaces old technology at the bottom of the market, while it is still clearly inferior to the best of the previous tech. The low-performance, low-price market segment is often happily ceded by established companies dominating the old technology, who think, “We don't want to make that crap, anyway.”

But over time, two things take the old, dominant companies by surprise: First, the cheap new products attract a whole new group of consumers to the market. Take radios, for example: The first Sony transistor radios were cheap and portable. Companies like RCA — selling high-quality tube radios — didn't feel threatened by Sony at all. RCA couldn't imagine anyone buying a Sony, no matter how cheap, because their reception and sound quality were terrible.

What RCA didn't see coming was that there was a huge, new market for radios. Teenagers, who were on the move, wanted to listen to rock ‘n’ roll music that their parents (who controlled the RCA) couldn't stand. Teens bought transistor radios by the millions.

That enabled the second thing to happen, which was that those new customers funded R&D that enabled transistor radio performance to improve, and supplied a huge pool of consumers who, as they became more affluent, stuck with the technology they were familiar with.

If Sony had decided to go head-to-head with RCA, going for RCA's performance and price right away, it would have failed miserably.

Similarly, in its early years, Honda avoided competing with “real motorcycle” companies like Norton. But after selling millions of step-throughs, Soichiro Honda was able to fund his first Grand Prix racers.

Which brings me back to Uhlarik and Suru. Michael Uhlarik studied vehicle design at the Royal College of Art in London, interned with Piaggio in Italy, and then got a job with GK Design Group, a nominally freestanding company that happens to handle most of Yamaha’s product design.

Uhlarik returned to his native Canada to work for Bombardier Recreational Products (CanAm Spyder, Seadoo, etc.) but found himself at odds with BRP’s senior management. He was in charge of long-term projects, with a seven-to-10-year time horizon, and was certain that the future was electric. That was not a popular position at a time, with gasoline at $2.50 a gallon and an oil-friendly Texan in the White House. A BRP reshuffle left him out of job, and led to his relocation to Halifax, Nova Scotia.

BRP’s anti-EV stance notwithstanding, 2010 was a heady time in the electric motorcycle world, particularly when it came to street bikes with performance aspirations. The first TT Zero race had just been announced. Zero, Brammo, and Mission all swore they were in the market to stay. Uhlarik wanted a piece of that action and created a prototype, the Amarok P1, that combined an innovative chassis with off-the-shelf powertrain components. Companies like Mission (and to a lesser extent, Brammo) were thinking “electric superbike” but Uhlarik wanted to create an EV with the performance envelope of a 250 GP racer. He ran out of money before he ran out of ideas.

Fast forward to 2017. Uhlarik’s now applying a lot of what he learned on the Amarok project to Suru, a $2,800 electric bicycle with a top speed of 20 mph and a 30-mile range. Yes, it’s a huge step down from 250 GP performance, but it was a lot faster than the Amarok in the only way that really counts if you’re an entrepreneur: He got his Suru project funded in nine days.

Uhlarik and I traded emails on and off for years before I finally found myself in Nova Scotia on other business earlier this year. Over a beer, he sold me on the idea that Suru could eventually fund his Amarok dream, in much the same way that Soichiro Honda sold millions of step-throughs to fund the development of Mike Hailwood’s RC161.

When Uhlarik won that SPARK prize, I thought it was time to check in with him again.

“Electric bicycles are the fastest-growing transportation phenomenon in the world, period,” he told me. “Globally, the market will be 44 million units next year, of which 300,000 will be sold in the U.S.”

Uhlarik’s unique selling proposition for the Suru is simple: It’s one of the few e-bikes designed from the ground up for rugged use. That’s different from most electric bicycles, which are exactly what the term implies: bicycles with a small motor and battery added.

Suru looks more like a small step-through motorcycle than a bicycle. It updates the original Honda Dream’s pressed-steel chassis with a precision-folded aluminum monocoque; the 28 mm fork and remote-reservoir shocks are motorcycle parts, as is the font hub and DOT-approved 17-inch rims. The frame houses a 650 watt-hour Li-ion battery; a 36-volt brushless motor lives in the rear hub.

“Don’t get me wrong, I love bicycles,” Michael said. “But they’re overpriced and weak. For all the carbon fiber and titanium that some bike dealer will sell you for $12,000, you’re still going to have rims that are out of round in a year. Bike-sharing schemes are spending up to $850 per unit per year on maintenance. Instead of asking bicycle-type components to handle heavier loads, we start with motorcycle-grade components and subject them to lighter loads. The result is an enterprise-grade electric bicycle that you can hammer like a Honda Cub.”

Last month, I was in Montreal at the World Congress of the Intelligent Transportation Society, an annual gathering of scientists, engineers, and bureaucrats working on everything from automated vehicles to radical improvements in mass transit. One of the big topics was the “last mile” problem. Mass transit is great, but how do people cover the first or last mile of their journeys?

One solution might be a pool of shared vehicles. Toyota had a booth at the ITS World Congress, displaying videos of the company’s various Ha:Mo (Harmonious Mobility) projects. I was struck by a video of a leaning three-wheeler Toyota calls the I-Road. At first glance, the little Toyota seemed eerily reminiscent of the Yamaha Niken.

Toyota envisions the I-Road as a “last mile” solution for anyone. Several hundred are already deployed in two test markets (one in Japan and one in France.) Right now, the user steers it like a car, but a Toyota rep told me they were working on an autonomous version.

I walked away from Toyota’s booth wondering whether the motorcycle industry has already fallen behind. OEMs like Yamaha and Honda should be perfectly positioned to design, manufacture and support new last-mile transportation solutions. I’m pretty sure that Clayton Christensen would identify the I-Road as a potential disruptor; not in spite of the fact it’s smaller, slower, less versatile and had less range than a small car, but precisely because of those things.

Meanwhile, Yamaha, which solved almost all the same engineering challenges in the creation of the Niken, is going to have a hell of hard time converting motorcyclists; if the comments left on Andy Greaser’s reveal story are any indication, the only thing the Niken’s gonna’ disrupt is Yamaha’s R&D budget.

One motorcycle company that seems to have taken Christensen’s “Innovator’s Dilemma” theory to heart is Scoot, which was started by a Harvard Business School grad. The San Francisco “Transportation as a Service” provider gives members access to a fleet of hundreds of electric scooters capable of reaching about 25 mph, with a range of about 20 miles.

Honda and Yamaha are missing a great bet by not launching services like that, if only to get access to user data as a marketing resource. There’s already anecdotal evidence that people who start out as Scoot users are inclined to buy their own scooters and motorbikes in order to roam further afield. (Scoot users aren’t allowed to cross the bridges into or out of San Francisco.)

Michael Uhlarik is slightly more of a traditionalist, in the sense that at least for now he sees Suru as a vehicle that users will own, not just borrow.

“I don’t see Suru as a last-mile solution, I see it as a last-10-mile solution,” he told me. “Buses and trams are great, but you have to live on their schedules, and people like independence. The e-bike’s an intermodal link; yes, we’re going to have better mass transit, and autonomous cars, but what if you just need a dozen eggs, or want to meet friends for coffee? We’ve calculated that 60 to 70 percent of car trips could be accomplished much more efficiently with Suru.”

After building nine prototypes, Uhlarik’s on the verge of commercializing the Suru, although his plans call for a modest 500 units to be manufactured in 2018. Don’t be lulled though, he’s still got big dreams.

“I’m getting back into motorcycles, but this time it’s going to be on my own terms, with my own brand,” he told me. “My trajectory is, first an e-bicycle, then a scooter — something with the power of 150 cc — and then, absolutely, motorcycles.”

“We have a couple of years, before the big guys get into it, at which point it will be harder, but recent motorcycle history proves you can challenge the established players,” Uhlarik says. “KTM is now Europe’s largest motorcycle manufacturer, and really taking it to the Japanese on many fronts, but just 25 years ago, it was a radiator manufacturer with a small range of underwhelming motorbikes. Even if Honda and Yamaha get into electric in a big way, we can find a niche. It’ll be harder but not impossible.”

“People have been trying to push electric motorcycles on us from the top down,” Uhlarik recently told me. “I was one of them, trying to make a boutique, Bimota-style electric motorcycle that you might find 10 or 20 people a year who want it. Suru is the opposite. Every time I ride it, people roll their car window down and ask, ‘What is that?’ ‘How much did it cost?’ I tell them $3,500 (CDN) and they immediately want to know where they can buy it. I have interest from 45-year-old women, teenagers, 300-pound security guards. You don’t have to explain it.”

If Suru succeeds and eventually funds the electric race bike that Michael Uhlarik wanted to build all along, he won’t have to explain himself to Clayton Christensen, either. 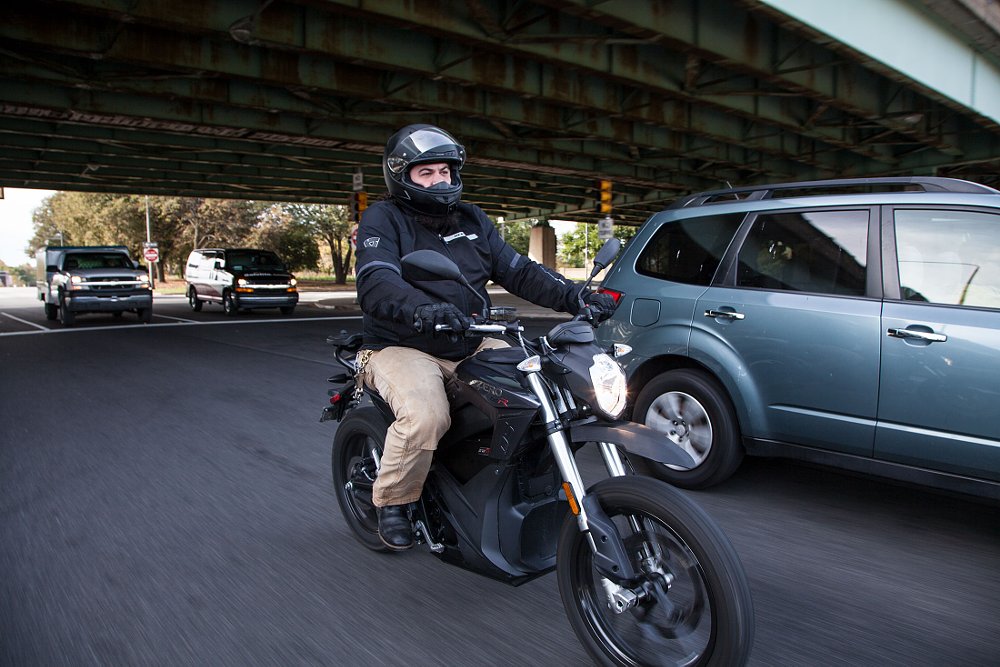 Will Honda's flirtation with electric motorcycles ever pay off? Lance Oliver

The Honda concept motorcycle that could be revolutionary Lance Oliver 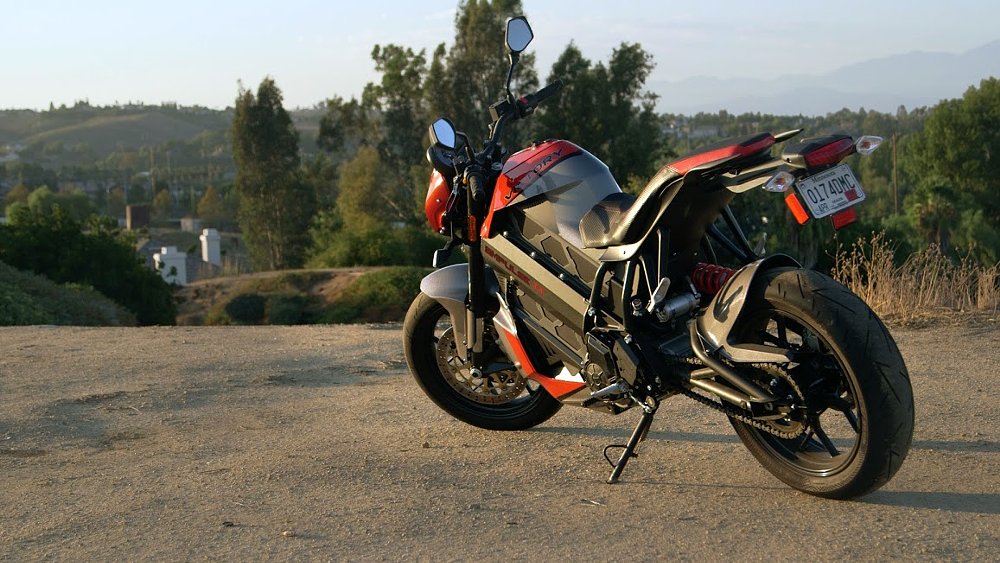