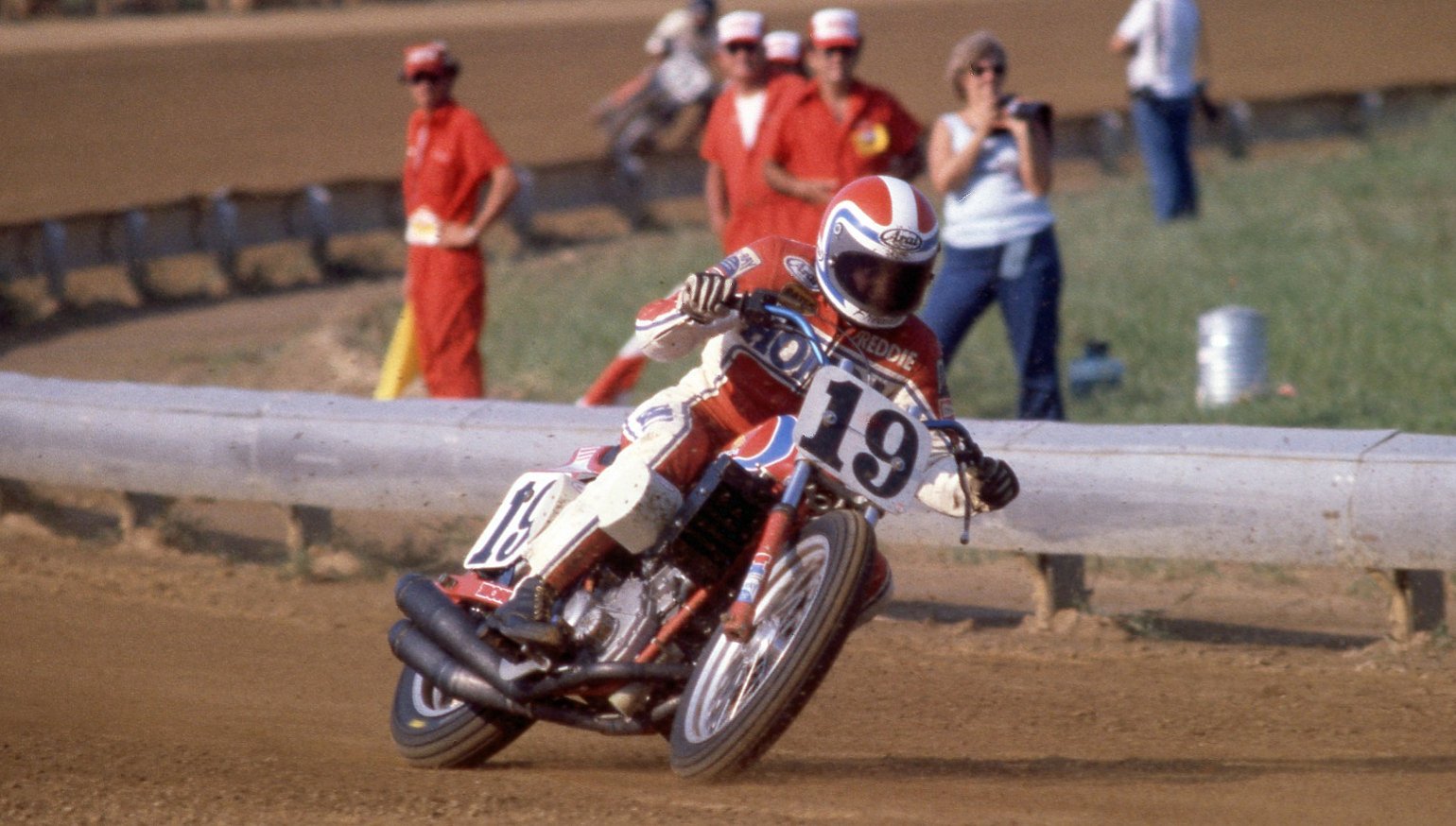 What will it take to get a factory challenge to Indian in AFT?

Just days ago, AFT announced the list of teams that will be in the new elite class, and the 15 entries include 10 Indian FTR750s, three Harley-Davidson XG750Rs and two Yamaha MT-07 DTs. Three wild-card spots are also available to fill out the 18-rider field. The three teams that have been approved so far for those wild-card spots also plan to enter Indians. (More wild-card teams may still be approved.) So SuperTwins is not exactly a spec series, but considering Indian's dominant performance the last two years, it's clear which marque is favored in 2020.

Other teams have tried to challenge Indian by building trackers with engines from other brands. The two Yamaha-powered trackers entered for 2020 by Estenson Racing are one example, and trackers using the Kawasaki 650 cc twin have been competitive in recent years, especially on mile tracks with a tacky groove.

It’s hugely difficult, however, to adapt any production motor designed for street use and get the traction and "ride-ability" of the purpose-built Indian. Without getting too deep into the engineering and math of it, the reason is that no OEM is going to design a street twin with room in the cases for a seven-inch flywheel. Harley-Davidson’s struggle to make the Street 750-derived XG750R competitive is another case in point.

That raises the question of what it would take to lure another manufacturer into the series. History may not repeat itself, but it often rhymes, so let's look back at a very different time when another company decided to challenge for a Grand National flat-track title.

Between 1965 and 1981, U.S. motorcycle registrations increased from 1.4 million to six million. Honda got the lion’s share of that increase. That growth was not built on domestic racing success. In fact, the company didn’t have a concerted or comprehensive AMA racing program at all.

But in the late 1970s, Dennis McKay, who controlled American Honda’s small racing budget, funded a back-door flat-track team with bikes made by Jerry Griffith, who had previously worked on Kenny Roberts’ Yamaha flat-track bikes. It made sense to tap Griffith for the assignment. What didn’t make any sense at all was Honda’s decision to use its only existing V-twin, the CX500, as the basis for a race motor. Harley-Davidson had worked the bugs out of the XR750 over the previous decade, had dominated the series as Indian is doing now, and had proven that V-twin power was the way to go. But the CX500 engine was no Harley-beater.

“We knew we couldn’t compete with the Harleys... but Honda didn’t have a 750 twin," Griffith said. "They only had fours. So that was all we had to work with. It was a sorry deal.”

Sorry or not, Honda gave Griffith a CX500 motor. He turned it 90 degrees in the frame and grafted a sprocket on it. He couldn’t turn the heads, so the rider’s leg had to go between the carburetors.

Famed Honda engineer Shoichiro Irimajiri, involved in landmark bikes such as the CBX and the oval-piston NR500, provided some support from Honda’s Racing Services division and Griffith was able to punch out the CX500 to 750 cc. He sorted out a chassis for the more powerful motor and got five replica frames made up at C&J.

Griffith hired Ted Boody and Hank Scott as development riders. They worked some of the bugs out of it without attracting too much attention by racing a bunch of non-National miles between Kansas and Ohio. As the project gained momentum, Griffith brought in Gene Romero, Mike Kidd, Terry Poovey, and Mike Pearson. Most of their feedback was negative!

“The problem wasn’t a lack of power. In the end, we got 90 to 92 horsepower out of it,” Griffith told me. “Its biggest problem was that they’d bored it out so big, it didn’t have enough room [in the water jacket] around the sleeves. It would get steam pockets in it, and overheat and slow down. We couldn’t run anti-freeze. If we could’ve run anti-freeze it wouldn’t have boiled it out. But it was a rocket for four or five laps.”

Riders of the caliber of Freddie Spencer (shown racing the NS750 in the photo at the top) tried to make the Honda a winner. But in the end, Scott Pearson won one National on the NS750. It was kind of a freak deal that Griffith attributed to a combination of Pearson’s holeshot ability and Louisville’s narrow groove, which Pearson was able to defend as the NS predictably lost power late in the race.

“It was Scott Pearson that won the race,” Griffith said, “not the motorcycle.”

The NS750’s overheating problem was unsolvable, and Honda faced the fact that it wasn’t going to win without a new motor. For years, the accepted wisdom has been that Honda merely bought a Harley-Davidson XR750 motor and reverse-engineered it to create the RS750. That’s not what happened.

Honda was developing its first 750 cc cruiser, the Shadow. The Japanese sent one of those 750 cc prototype motors over to Griffith to see if he could adapt it to flat track. He and Gene Romero immediately saw that although it had been designed as a full 750, it was too wide, the sump was too deep, and it was too heavy. “We’d be better off racing what have,” Romero told Griffith.

The Yanks wangled a trip to Japan in the hopes they could convince Honda to create a purpose-built engine. Honda wasn’t about to go that far, but the two caught a glimpse of a secret project: a 750 cc twin with a narrow V angle, being built for the Paris-Dakar race.

“It had a two-valve head, but it was perfect,” Griffith recalled. “I said, ‘We need this one here, with a full-circle crank and a four-valve head'.”

That was the genesis of the RS750. It was no XR750 clone. If it had been, it would have worked better right off the bat.

The first few iterations didn’t exactly have Harley-Davidson’s riders shaking in their steel shoes. Honda’s factory team practiced with new RS motors to develop them, but raced with the old NS ones which, for all their overheating, were still faster.

Honda sent one RS750 prototype after another over to Griffith that first season. He tried them, modified them, and sent them back. Finally, Griffith got one that he chopped and changed a bunch of stuff on. It shook like a dog shitting a peach pit, but it hooked up and Hank Scott won the Du Quoin Mile on it. Griffith immediately crated the mill and flew it back to Japan with a request: More like this, please.

“They copied that one and sent a bunch back to us.” Griffith laughed as he recalled it. “They were fire-breathing sumbitches. Once we’d worked the bugs out of it, the RS annihilated the Harleys.”

At that point, Honda being Honda, someone high up told Griffith it was now time to win the Grand National Championship. He explained that there were three Harley-Davidson riders they still couldn’t beat over a season: Scott Parker, Ricky Graham, and Bubba Shobert.

“We couldn’t get Scotty, but we got Ricky and Bubba,” Griffith said. “I’ll never forget the day we went to the Sacramento Mile and Ricky and Bubba, down the back straight, they were gone. I thought, the fans aren’t going to like this.”

How "RS" came to mean "ReStrict it"

Ricky Graham won the Grand National Championship on an RS in 1984 and Bubba Shobert took over and won in ’85, ’86 and ’87 before making the transition to roadracing.

For the 1987 season, the AMA introduced new rules requiring the Hondas and Harleys to use a 33 mm restrictor plate to reduce horsepower. The AMA presented the change as a way to increase reliability and control costs because tuners would have to do fewer engine rebuilds. Honda felt unfairly penalized by the restrictor plate rule, however, and it was widely perceived as a favor to Harley-Davidson.

Anger over the rules was not the only reason Honda decided to disband its factory flat-track team, however. The mid-1980s was a challenging period for the Japanese manufacturers. Harley-Davidson had successfully lobbied for tariff protection, Honda sales were contracting and unsold inventory crowded dealer floors. The Shadow, which was presumably the model Honda wanted to promote with its flat-track program, failed to meet sales projections.

Despite being hamstrung by the restrictor plates, the RS750 remained popular with privateers, who liked them because motors were delivered fully assembled and ready to bolt into a frame, whereas H-D XRs arrived as a collection of disassembled and barely finished parts. Plus, the Hondas had much longer service intervals. Many privateers only rebuilt them once a season, whereas the XRs needed almost weekly attention. Ricky Graham won the RS750’s last championship, as a privateer, in 1993.

Could a manufacturer emulate Honda and build an FTR-beater today?

Polaris’ Swissauto subsidiary did a great job developing the Indian FTR750, but every major motorcycle company either has similar R&D capacity in-house, or has relationships with specialist suppliers like Oral Engineering who could design a killer 750 cc V-twin from a clean sheet of paper, with room in the cases for a seven-inch crank. So the real question becomes: What company would do it?

Harley-Davidson is the only other OEM besides Polaris to have recently funded a flat-track race engine development program. I’ve heard that at its last round of dealer meetings, The Motor Company announced that it would shutter its factory flat-track team, and it only reversed that decision when long-time dealer-race sponsors pushed back. Harley-Davidson apparently took the opposition seriously, because Bryan Smith, Jarod Vanderkooi and reigning AFT Singles Champion Dalton Gauthier will be riding XG750Rs in SuperTwins this year.

Kawasaki is the first choice of privateers in the lower Production Twins class and Estenson Racing is trying to make Yamaha competitive in the SuperTwins class this year. Other brands, like Triumph and Ducati, have some flat-track heritage. But all those companies seem happy to have flat-track privateers race what they make and show no indication they’re willing to build something specifically for flat-track racing or to back a real factory team.

It’s hard for me to imagine any company justifying the cost of a real factory effort in AFT at a time when U.S. motorcycle sales appear to be stalled — or worse, in structural decline. The R&D effort required to produce a modern equivalent of the Honda RS750 would only make sense if it helped sell motorcycles in other countries where motorcycle sales are growing. Interestingly, AFT CEO Michael Lock has talked about staging flat-track exhibition races overseas.

Looking at flat-track racing from a world-market perspective, KTM leaps to mind as a company that has racing in its DNA and has built some very compact and powerful V-twins. Royal Enfield has some flat-track history of its own, aggressive worldwide growth plans and I’m told we’ve not yet seen the real capability of RE’s R&D department.

For now, however, it looks like SuperTwins will pick up where Twins left off, with Indian domination. We will probably have to wait a while before history rhymes and a manufacturer tries to repeat Honda's flat-track success. 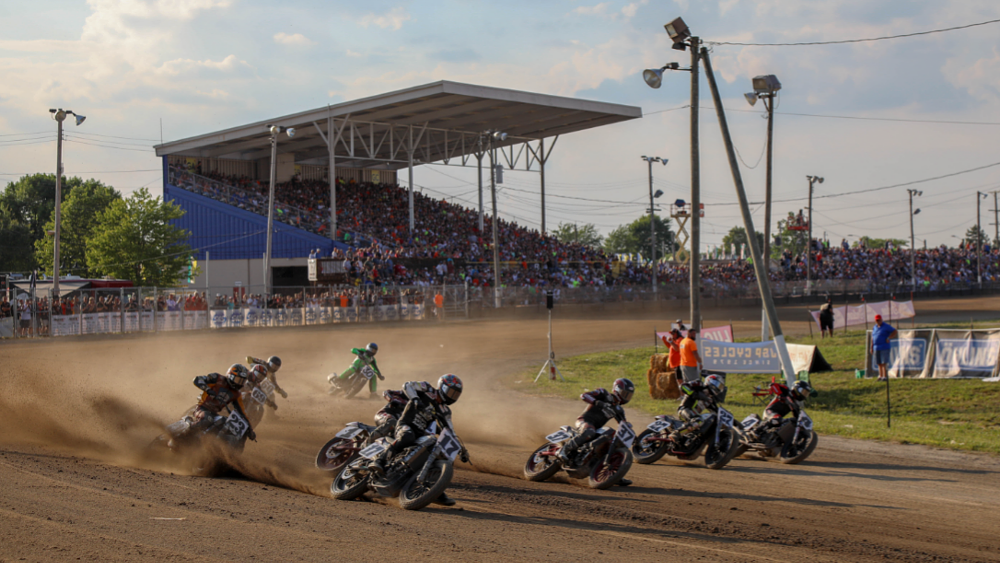 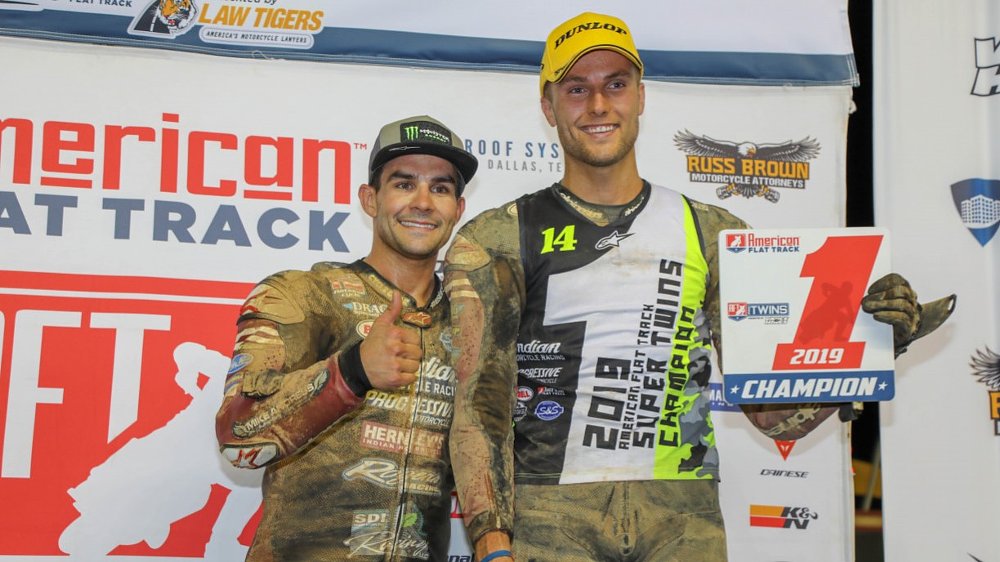