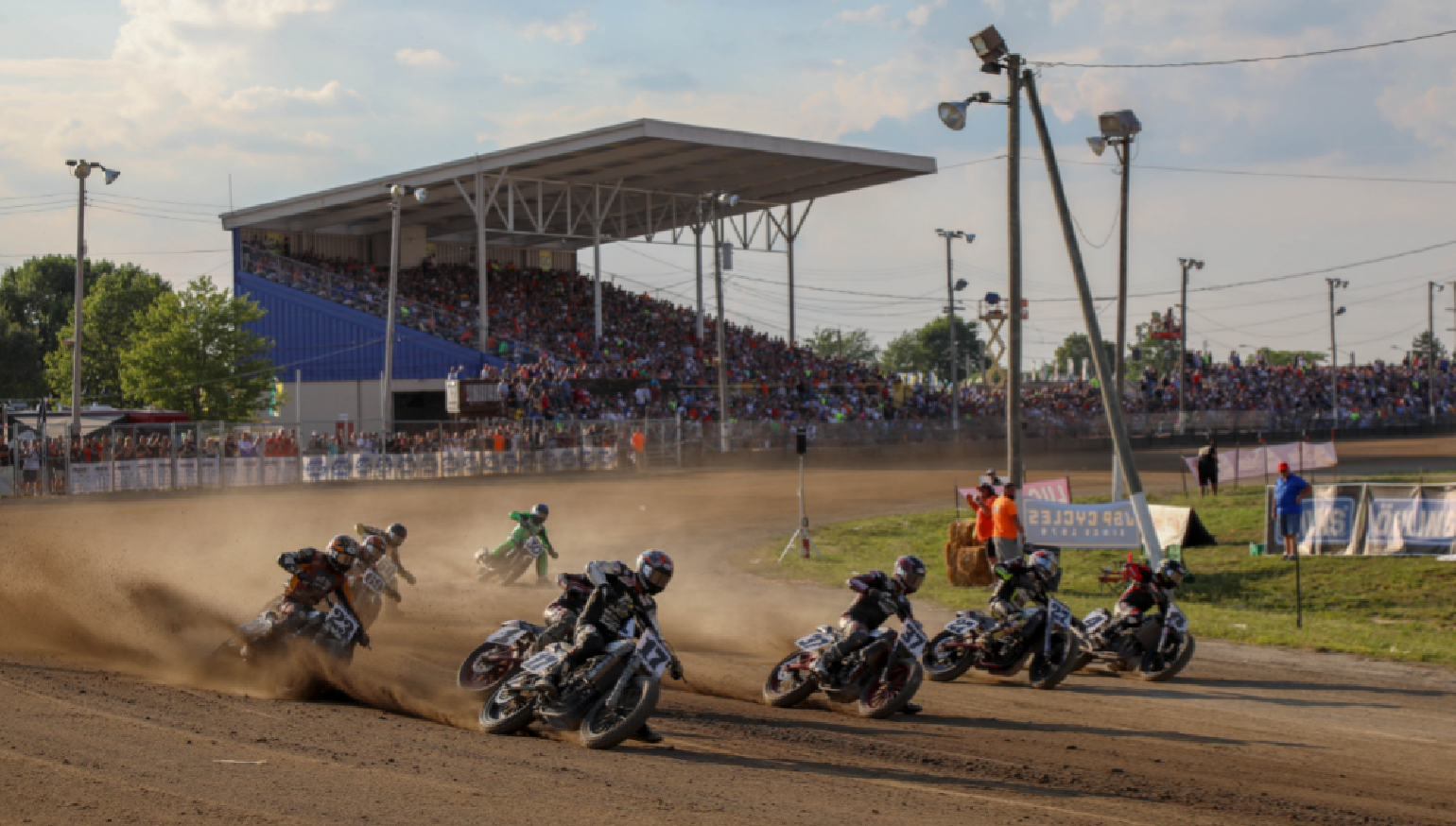 Last month, American Flat Track issued an FAQ memo on the topic of the new-for-2020 SuperTwins premier class. Opinions in the paddock are mixed, but any way you look at it, the change trades some of the old blue-collar ethos, in which a privateer can come in and compete with the top pros, for some MotoGP-style elitism.

The stated goal for SuperTwins is to “ensure that recognizable teams and riders are in the Main Event every week and to package the premier class for live broadcast.” Translation: Fans will see the same riders from one Main event to the next, like in MotoGP.

Most of the people in the AFT paddock that I talked to, regardless of their opinions, asked me not to quote them by name. The one person who is happy to talk about the changes on the record is the man behind the AFT, CEO Michael Lock. Lock is an expat Brit who previously ran Ducati North America and, before that, headed up the Triumph brand in the United States. He believes that the new SuperTwins class is live-TV friendly, that it can double the sport’s audience, and be exported into new markets, including outside the United States — again, making it more like MotoGP.

Lock laid out his vision in a meeting with major AFT team owners and principals when flat-track made its recent swing through Sturgis. It is an audacious plan that has the paddock riled up. It's not the first time change has upset the traditional flat-track paddock, but this time is a little different.

Days of privateer underdogs making the Main are over

In the time I’ve reported on flat-track, the sport’s premier class has changed its name, and the whole sport’s come under new ownership and teams and riders have adapted to sweeping new technical rules. Change is rarely welcomed, and I’ve heard a lot of bitter complaining, both about the way rules were written, and then the way they were sprung on competitors.

Here’s what bothered me most about that FAQ memo: No matter what name it went by, the Grand National Championship’s always been the most respected motorcycle oval-racing series in the world. Sure, the playing field was often tilted towards one manufacturer or another, but from a rider’s (or tuner’s) perspective, it was an open series. Anyone with an Expert license could build, borrow, or rent a motorcycle and try to make the Main.

I’m not talking ancient history here. In 2010, the Lloyd Brothers team broke a crazy streak of Harley-Davidson victories with a Ducati; if I recall correctly their race motor came out of a crashed press bike. Willie McCoy, a Texan who built his own XR750 and only ran a couple of Nationals a year, won the Springfield Mile in 2011. (And to prove that wasn’t a fluke, did it again in 2012.) Bill Werner, after years running the Harley race shop, built a cobby 650 twin, on an absolute shoestring. That thing probably only made weight because there was that much weld spatter on it. When it wasn’t trying to kill Bryan Smith, the little Kawasaki finally broke Harley’s hegemony on the most prestigious mile tracks.

Those guys, and countless other underdogs, cracked open late-Saturday-night beers and savored them, knowing that on that night they’d been the best in the world, while far richer teams packed up semi-trailers, with their tails between their legs.

Of course most of the time, the goal of those part-timers and hot rodders was just to get into the show. Making the Main at all, even in last place, was a moral victory when 50 or 60 Experts fought through heats and semis for one of 18 spots on that grid. For hardcore fans, there was as much drama watching the fight for the last transfer spot as there was in the fight for the win.

If SuperTwins comes into effect as described, that won’t happen anymore. At least, not in flat-track’s top class. When I put that complaint to Michael Lock, he said those days are already over anyway.

“Flat track was always an amateur sport with a veneer of professionalism," Lock said. "It worked like that for 60 years, but the motorcycle industry has changed, and that’s reflected at the top of our sport. We haven’t restricted the size of the field, and yet the typical entry count for an AFT Twins race is 22 to 24 riders. Only 14 riders have done every round this year.

“The sport has organically evolved. What we’re seeking to do is encapsulate that in a format that everyone understands, and take it to a new level. But that’s the top of the pyramid. Production Twins is starting to feel to me what AFT Twins felt like a couple of years ago. So the guy who fancies trying to beat James Rispoli on a Vance & Hines-built Harley — he can do that in the Production Twins class.”

Not all team owners are as nostalgic as I am. Some of them are more worried about what they see as an ominous sentence in the AFT memo: “There will be additional costed services provided as part of the SuperTwins Team contract.” Team owners fear that the cost of running in the SuperTwins class is going increase immediately in exchange for the promise of an easier sponsorship sell later.

Again, I put the team owners’ concerns to Lock. He said those “extra costed services” consist of millions of photos, hours of video and "digital marketing tools" that will be made available to the SuperTwins teams so they can put together professional pitches and go after sponsorship outside the usual suspects.

"Up until now, we’ve paid for all that and used it primarily for series promotion," said Lock. "What we’re proposing is to make all that available and menu price them, so [teams] can choose at what level they want to go in. All we’re saying is, we expect you to do some minimum level of marketing, so there will be some obligatory costs.

"The price [of those assets] is not going to go up, but we’re just saying everyone’s going to use them."

Who gets a say in the decision

Pretty much everyone wishes these sweeping rule changes were proposed, with a comment period, rather than being presented as a fait accompli. One team owner I spoke to has spent the last year developing a new bike that he’d like to run in select races, but since he probably can’t afford to run in the SuperTwins class — and might not even be approved for it — he’ll now be relegated to the second-tier Production Twins class. That will likely mean throwing out a lot of painstaking motor development, because it has different displacement limits.

There are a handful of really top-tier teams that can safely assume that they’ll be invited to run in SuperTwins if they choose to enter the class, but there are other professional teams who can’t be sure, because the selection criteria have not been published. Lock told me that teams would be chosen on the basis of financial stability, professional infrastructure in terms of staff and equipment, and the experience of the riders.

“If we’re in an oversold situation, that we’ve got more applications than positions to fill,” he said, “We’ll look at the riders, to ensure that the best riders are in the mix.”

Lock won’t admit to blindsiding anyone in the paddock with new 2020 rules. Although AFT officials recently presented the SuperTwins proposal to key team principals at a meeting in South Dakota (between the Buffalo Chip TT and the Black Hills Half-Mile race), Lock assured me that wasn’t the first time those guys had heard of it.

“The first time I was live with this in public was at Daytona, during Bike Week, the night before our first race,” Lock told me. “We had a paddock kickoff meeting. I gave a presentation then to launch it, and all those guys were certainly in attendance. Unofficially I’ve spoken to most of them way before that.”

I specifically asked Lock about four team principals who I thought would need to buy into SuperTwins for the class to succeed: Gary Gray at Indian, Terry Vance for Harley-Davidson, Tim Estenson, and Jerry Stinchfield, who writes the checks for the Roof Systems’ "superteam." I asked if any of those guys had already bought in.

“Well of course they’re all smart, cautious businesspeople and they want to see the contracts,” Lock replied. “I’d be shocked if any of them came to me and said, ‘You know what Michael, I don’t really fancy it.’”

After I got off the phone with Lock, I texted one particularly disgruntled team owner, “Michael says he’s been discussing SuperTwins with team principals since Bike Week, had a meeting with all key principals on Monday and would be shocked if they don’t all sign on.”

I got a one-word response: “Bullshit."

To be clear, not everyone is against SuperTwins. Gray, who runs the Indian team, supports the idea, although he would like to see 12 all-season slots for permanent teams and riders, with four wild-card slots open in every race. That would allow for a continued privateer presence.

“I left the meeting [in South Dakota] with good confidence that something will be changed to keep the small guys in the sport" in the top class, Gray said.

I also spoke to current riders who are cautiously optimistic about it. They’re willing to wait and see how the new class shakes out. It says something about the atmosphere in the flat track paddock that even stakeholders expressing cautious optimism about the new class asked me to keep their names out of it.

One ex-team owner who still has deep roots in the paddock defended Lock’s dictatorial management style, noting that Lock’s job is to make AFT profitable, not to make friends.

Maybe Michael Lock is right. Maybe the days of a plucky privateer snatching a win from the factories are over. Maybe the days of 50 guys dogfighting over 18 places in the show can never return, so SuperTwins is the way forward, and there’s no going back.

Or, maybe the skeptics are right. I spoke to team owners who don’t believe Lock’s plan will work — and others who believe that whether the plan’s good or not, he’s not the man for the job.

But no matter who you believe, this much is certain: American Flat Track is Michael Lock’s fiefdom. I’ve heard team owners grumble they’ll go over his head to Jim France, from whom Lock’s power devolves. Lock’s put down such insurrections before. So come 2020, it’s likely that we’ll see something that looks a lot like the SuperTwins program he’s outlined.

Will SuperTwins usher in a new era in flat-track racing, with a big live TV audience and occasional international races in Barcelona, Tokyo, or Sydney? Will teams be able to leverage that additional exposure, and negotiate lucrative new sponsorships with non-moto brands?

Will it be the best oval-track motorcycle racing in the world?

Hell yeah. The best motorcycle racing show, period. It always has been. 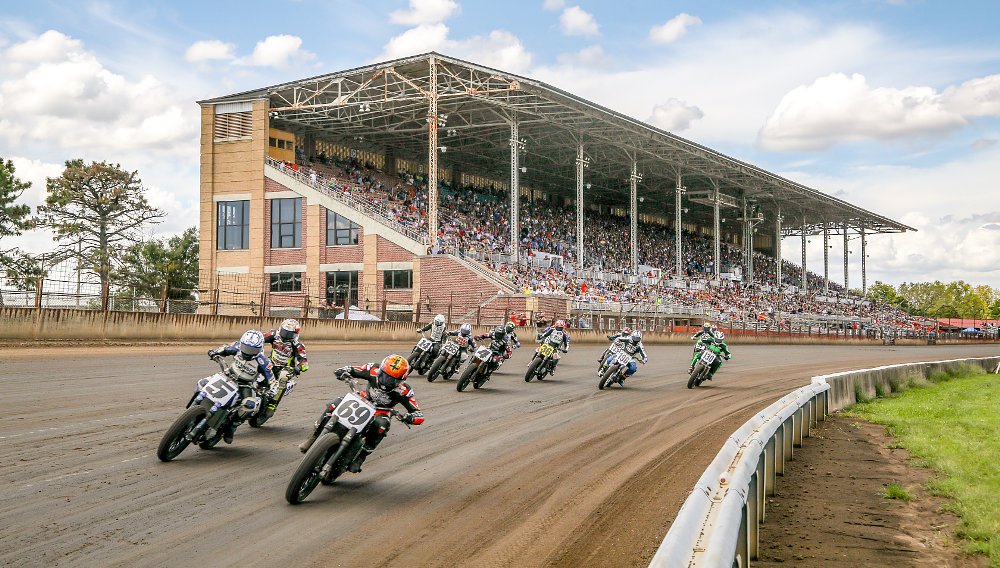