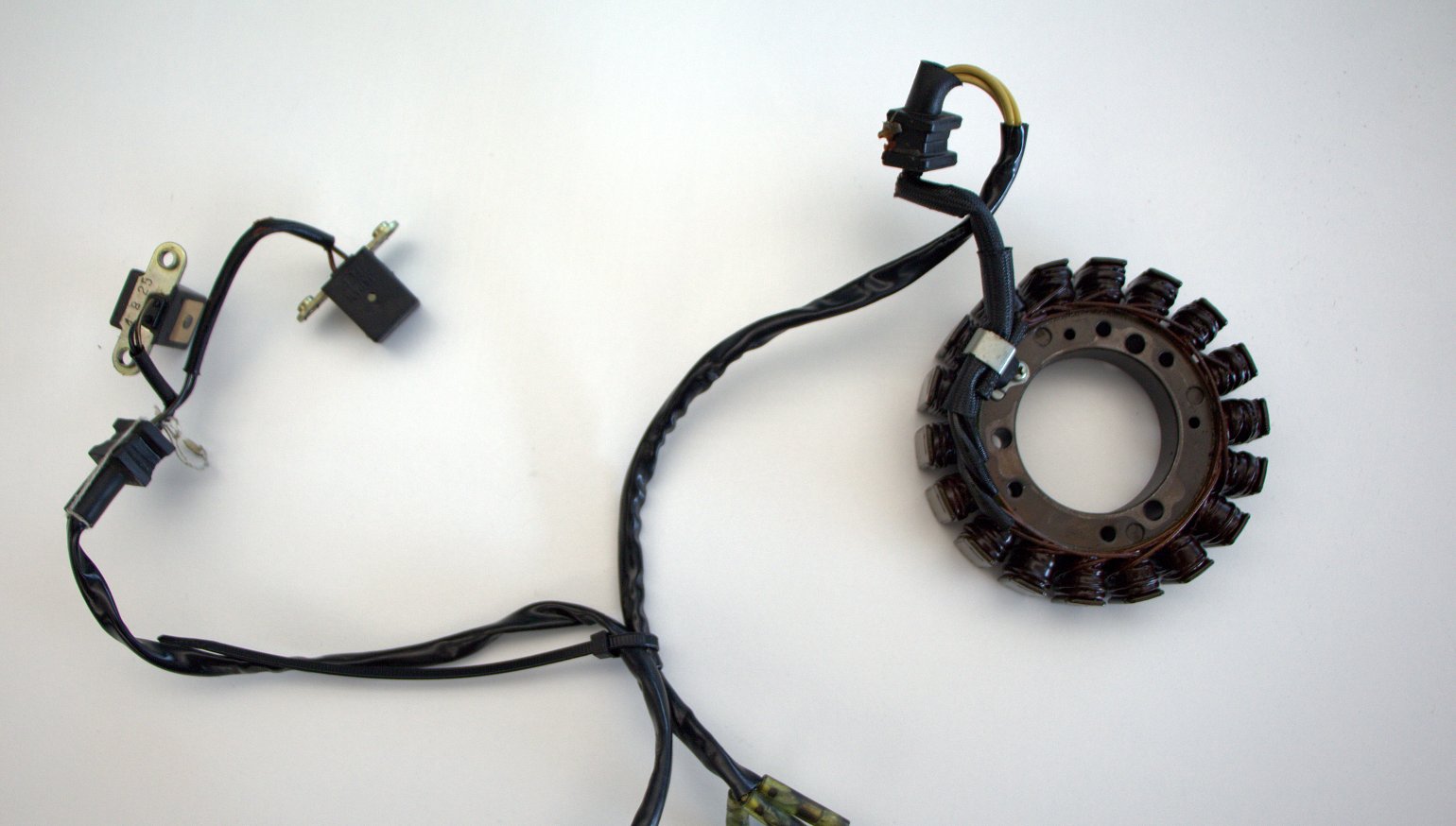 What is a stator?

If you clicked on this article, I’d imagine you have an electrical problem, and you’re looking to understand what went wrong (maybe so you can repair it). If you don’t, congratulations for being proactive!

Your stator is a pretty vital piece of the electrical system on your bike. In simple terms, if you’re riding a modern bike, it has many electrical needs. Lighting, ignition, the fuel pump, and the starter all consume varying amounts of power. In simple terms, the battery provides this power. The battery would quickly be depleted, though, if not for the star of the charging system show, the stator. Think of your stator as the piece that makes electricity to keep your battery charged up to make all that electrical stuff on your bike work.

The short version of this article

In the motorcycle world:

“Stator” is often used to mean “the thing that spits out AC electricity on a modern bike that usually burns up because a magnet on a steel flywheel doesn’t really go bad.”

“Generator” equates to “the cylindrical can that‘s usually gear-driven indirectly by the crank (but sometimes is spun with a belt) that spits out DC power and has an armature, commutator, and permanent magnet field coils inside it, with a discrete regulator located elsewhere.”

“Alternator” is usually referred to casually to mean “belt- or chain-driven electrical unit that looks like the thing on a car and spits out massive amounts of DC electricity with stator, rotor, regulator, and rectifier all contained in the same compact housing.”

And “magneto” is usually “the self-contained thing on an older dirt bike or chopper that simplifies the wiring and makes spark so one can eschew a battery if the motorcycle is also equipped with a generator.”

As the above section indicates, you may hear the terms “generator,” “stator,” and “alternator” tossed around with much casualness. All of these items have been used on motorcycles, and all serve (sorta) the same function. Let’s take a fast trip through history and talk about the differences between them so you know why you have a stator, and what it does differently from other devices that make electricity — and why the related jargon is a little confusing.

The very earliest motorcycles used a magneto (a small, isolated system run by the engine) to create spark to provide electricity needed by the spark plug to fire. This very limited system worked because there wasn’t much electrical demand on a motorcycle of the day. Lights at the time were non-existent, or later, acetylene-powered.

However, electrical geegaws were bound to make their way onto motorcycles. Riders then wanted top-of-the-line tech, just as they do today. Adding horns and electric lighting, for instance, made the addition of a battery and a charging system almost a necessity. The batteries were charged by generators, a device that produces DC power. They accomplishes their task by spinning an armature, a component composed of coils of copper wire, inside a fixed magnetic field. (Generators actually make AC power, but it’s “rectified,” or converted to DC, by the commutator and brushes internally.) Externally, generators then rely on a “cutout relay” or switch that disconnects the genny from the battery so as not to overcharge. When the battery drops below a set voltage, the switch makes contact again, allowing the genny to charge.

Fun fact: The field coils in a genny are technically a type of stator, because a stator refers to the stationary part of an electricity generatin’ mo-sheen.

Up to the early 1960s, most motorcycles were six-volt systems, but after that time, many motorcycles began sporting 12-volt electrical items. The reason for this was due primarily to increased engine power. To make more powerful motorcycles, compression ratios climbed higher. Starters needed greater power to spin the engines, and higher voltage could help supply that power. Generators were then produced in 12V variants for a brief time.

Generators on motorcycles are often a self-contained unit. They’re fairly long and heavy, and in most motorcycles of their time, they were located remotely and usually driven with gears or a belt. For most motorcycles, generators were supplanted by alternators in the late 1960s through the 1970s.

An alternator, which is a type of generator, produces electricity by spinning a magnetic field (the “rotor,” the piece that performs the equivalent function to the armature) inside (or around) the stator, the stationary piece that contains windings of copper wire, remember? That’s sort of flipsy-daisy from from the item those in the motorcycle world call a generator, if you’ll remember.

In the motorcycle world, alternators produce AC power, and they’re a bit more efficient. Their packaging allows them be fitted directly to the output shaft of the engine, representing a big savings in weight, simplicity, and assembly labor. Many alternators (though not all, by a long shot) use a magnetic field rather than permanent magnets, as in a generator. This means that output can be varied, and usually leads to stronger charging at slow engine speeds. The downside to this is that electricity is required to make electricity, so you’ll need to run a battery on these bikes. (As a friend of mine put it when I was writing this article, “You gotta spend money to make money!”)

Because alternators produce AC power, it must be rectified to DC by… you guessed it, the rectifier! The modern rectifier is a series of diodes that converts AC power to DC. After that, the electricity moves to the voltage regulator, which… ready for it? It regulates the voltage, so it’s usable for charging the 12V battery in your motorcycle.

Note that those four pieces — the stator, the rotor, the regulator, and the rectifier — can be packaged together or separately. The stator and rotor are usually cheek-by-jowl because of the need for one to rotate ‘round the other. Note that collectively, a stator and a rotor make up an alternator, which is a type of generator. Crystal clear, right?

The reg and rec are also often packaged together, but the two items can live separately — and relocation works well on motorcycles because it allows the “puzzle” to be fit together by the engineers a bit more easily. A system like that, with a separate reg/rec box, is usually called a “stator.”

Some bikes, notably touring machinery, use a version of that system where everything is held in one container, usually referred to as an alternator. Though the previous system we discussed is absolutely an alternator, that nomenclature in the motorcycle world is often reserved for the “all-in-one” package.

Now that you’ve gotten through all that history, you know what the terms actually mean. Now, if someone tells you his stator is fried, you'll know he just means that the thing that charges the battery has taken the day off, assuming he truly has a stator. And if he does not, you can explain why.

WTATWTA: Why smaller engines can make more power than bigger ones Lemmy 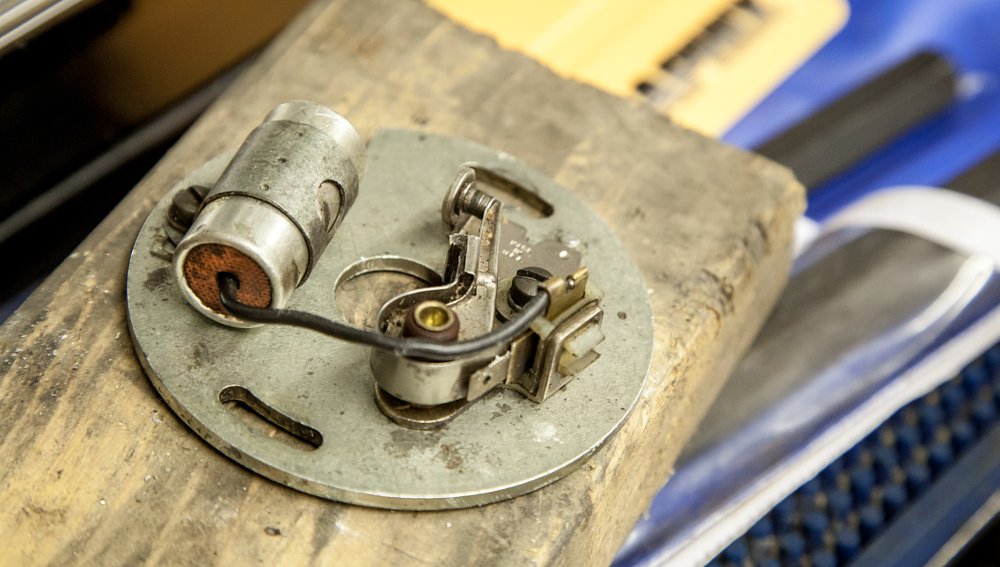