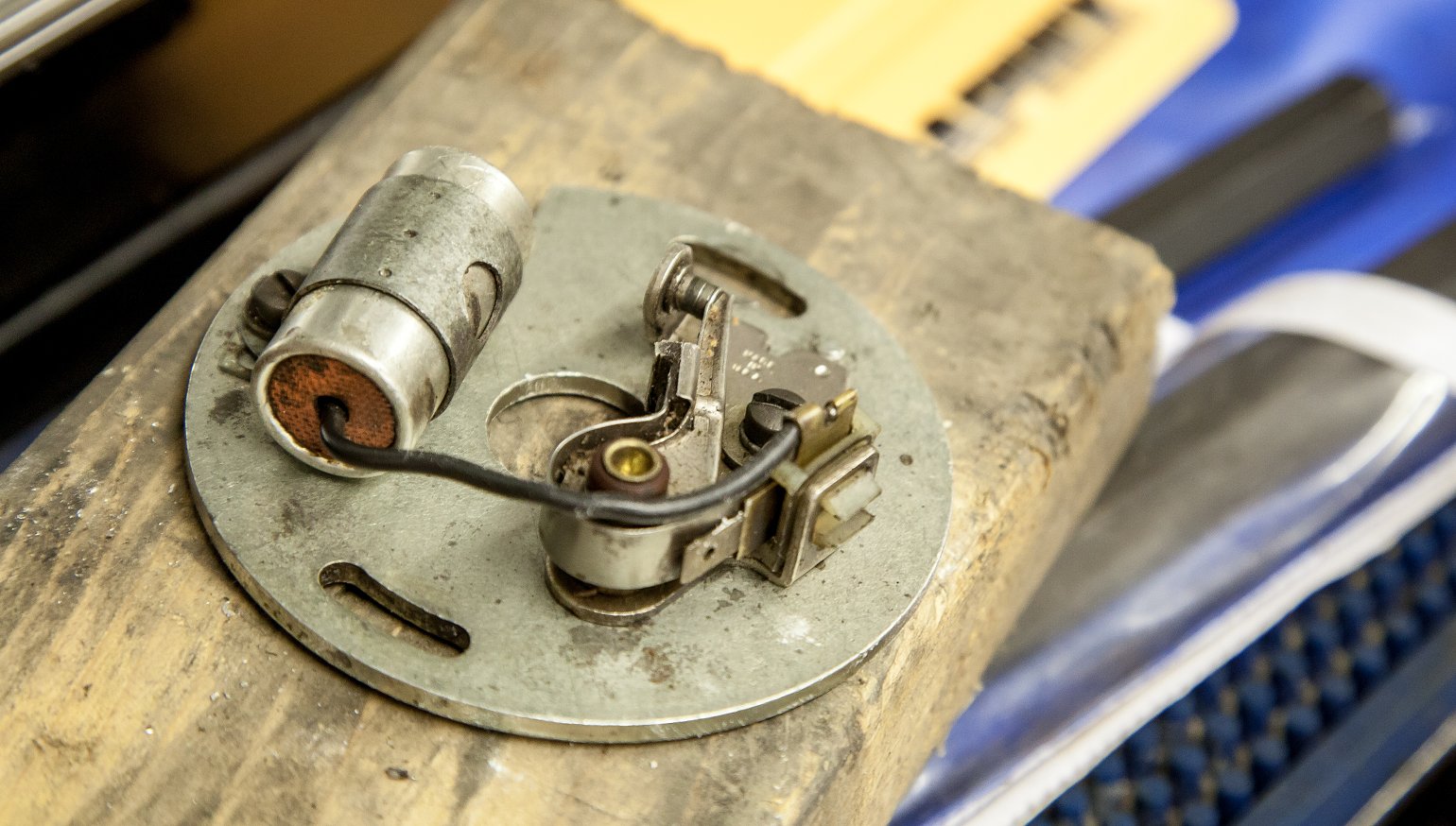 WTATWTA: What is wasted-spark ignition, and do I want it?

Modern motorcycles are almost all single-fire bikes, but dual-fire ignitions (also known as “wasted-spark” systems) are interesting because they set the stage for single-fire ignitions as we know them today. (They’re also a cool mechanical solution to the problem of spark distribution that’s now handled electronically.) The question of single- or dual-fire is one that is somewhat Harley-Davidson-specific due to the 45-degree V engine layout, but the history of spark distribution affects all motorcycles, and it’s a neat bit of history that might help you better understand how your own engine works — regardless of who made it.

A day at the motorcycle factory

Let’s rewind to nineteen dickety-two, back before fancy electronics, and pretend we’re watching the early motorcycle builders designing a basic single-cylinder engine. To ignite the air-fuel mixture in the cylinder, they needed one spark plug, one plug wire, one coil, and one triggering mechanism.

Remember, they ain’t got fancy computers to make sure that critical spark happens at exactly the right moment. It’s nineteen dickety-two, remember? What they needed was a reliable, mechanical way to distribute the spark the coil makes. The up-and-down movement of the piston doesn’t move the flywheel equally at all points in the stroke, so the designers realized they can’t use any of the pieces that move linearly for timing purposes. Once the linear energy was translated to rotary motion, however, it was (and still is) smooth and consistent, so they used the rotating camshaft, fitting something not unlike a cam lobe, fastened to the end of the cam. The bump on the lobe lifts and “breaks” the ignition points apart. That causes the coil to lose its ground and the plug to fire a split-second before the piston comes to the top of the stroke, right before the power stroke. (A little ignition advance is necessary. If you don’t know why we need advance, it’s OK. Just think of it as happening at the top for simplicity’s sake.) Easy, right?

It worked great! Bikes were flying out the door! The next logical engineering task was a two-cylinder. Bigger is better, baby! Let’s pretend this new twin is a parallel twin. The engineers should have an easy time, right? Use two coils, two wires, two plugs, two sets of points, and put another bump on the cam to fire off each spark plug, right?

Hold on a hot second. If the coil chucks a spark every time the first piston’s at the top of its stroke (or, more accurately, a little before), what’s going on with the second piston? If it’s a 360-degree engine, if cylinder one is finishing the compression stroke… where is cylinder two? Oh, that’s right, it’s in the exact same place, only it’s completing its exhaust stroke. Well, hell. A spark on some spent exhaust gas wouldn’t really matter, would it? (It wouldn’t.) It would just be... a wasted spark!

In that case, that means that this theoretical new twin would need two spark plugs and two wires, but only one set of points and only one coil. The bike wouldn’t run any worse, but the manufacturer is saving big money now. Rather than each cylinder having its own dedicated ignition system, you’ve got a few parts doing their job for multiple cylinders, firing spark twice as often as necessary, sparking in a cylinder where there was no real effect. (Hence the name for this type of ignition, dual-fire. While we’re on the topic, some companies confusingly reverse single- and dual-fire modes of operation, referring to cylinders and not spark. "Wasted spark" is probably the most accurate way of conveying this type of spark distribution system.) Anywho, back at the factory, the engineers got a clap on the back and maybe a gold watch. Simplifying design reduces costs. Motorcycle factory bean counters like this.

We just took one hell of a historical leap there. Real motorcycle history did not progress exactly like that, but it’s not too far off. I used a 360-degree twin for my explanation, because it's easy to understand relative to the single, due to its evenly spaced firing order. But companies like Indian and Harley actually had to figure out the jump to two cylinders with V-twins, which were the most common early form of twin in America. That made their task more daunting.

For our 360-degree engine, top dead center is at 360 degrees of crank rotation, and then again at 720 degrees. (The crank turns twice for each turn of the cam, remember?) Harley, though, has a 45-degree splay between the cylinders, so the crankshaft rotation between each “bang!” is uneven. The engineers spread the power strokes as far apart as possible. There is either 315 degrees (360-45) or 405 degrees (360+45) of crankshaft travel between power strokes. The front cylinder fires, then the flywheels turn 315 degrees, then the rear cylinder fires and the flywheels rotate another 405 degrees, and then the process repeats.

Man, that math is killing my head. Let’s get back to bikes. A 360-degree twin (say, maybe a Japanese twin) has the same amount of crank rotation between each cylinder firing off. A Harley, as we just covered, does not. That’s part of why a Sportster sounds so “lopey” at idle compared to an old Triumph or a Honda CB/CL. On the Sportster, when the rear cylinder fires (just a smidgen before TDC), the front cylinder is doing the exhaust thing, just like the parallel twin. But when the front hole lights off, the rear cylinder is just getting into its intake stroke. However, the spark never really matters, because even at full advance, the spark in the rear occurs before the intake valve has opened, so there’s no air and fuel present. (Note that the points breakers do not have the same size lobes, so the points can be timed 180 degrees from the correct orientation. Mechanics often refer to this situation, which leads to a bike that can actually run, albeit poorly, as timed “180 out.”)

The spark wasted on the rear cylinder occurs awfully close to when that cylinder’s gonna pull in its air-and fuel charge. Fortunately, most Harleys don’t run at high engine speeds (sub-7,000 rpm), and Harley riders prize low-end torque, which lends itself to the (relatively) high-lift, short-duration cams which work hand-in-hand to pull in a big air and fuel charge, even waiting on that last-minute spark in the rear jug.

Why wasted spark is obsolete

With the advent of computerized ignitions, timing can be more tightly controlled and spark distributed in ways that mechanical distribution simply does not allow for (with reasonable space and cost constraints). There’s no mechanical slop to account for, such as wear of the points and wear of the advance weights, in addition to the manufacturing tolerances for all these parts. Eliminating the mechanical bits also reduces maintenance and losses to the spark voltage. It gets better yet when coil-on-plug ignition is used.

Because the advance curve (which I explain a little bit here) can be calculated electronically, spark timing can be plotted in a shape that’s not really a curve, which can be beneficial with some combinations of cams, pistons and heads. Optimal timing can change based on some pretty fickle factors, like ambient temperature and the fuel’s resistance to detonation. Especially considering a Harley’s uneven firing order, it’s important to remember that each cylinder has its own optimal point when its mix should be ignited. Mechanical wasted-spark systems split the difference between the two cylinders — adjusting one always affects the other.

It’s not so much that tightly controlled spark timing creates horsepower, it simply breaks down the barriers to accessing all the horsepower a wasted-spark bike could make. By having a dedicated ignition system for each cylinder, timing can be customized for each jug individually.

Do I need a single-fire ignition system, or is wasted-spark OK?

Most modern bikes already have single-fire setups, including H-D. If you’re on a modern motorcycle, odds are excellent that you’ll want to look elsewhere for power gains. If you’re on an older 360-degree twin (or a flat twin, for that matter), the wasted spark really hurts absolutely nothing; there’s likely little to be gained from moving away from the wasted-spark system.

Vehicle engineers have designed some really cutting-edge ignition tools that far outperform even what the specialty aftermarket manufacturers were able to offer just a few years ago. Many of these systems take load, crank and cam position, knock, and other factors into account in a highly sophisticated and rapid ballet to determine optimum spark distribution.

All fuel-injected Harley-Davidsons are single-fire, so if you’re on a late model Sporty, Twin Cam, or Milwaukee-Eight-powered machine, it’s a moot point. Your stock ignition probably has plenty of oomph until you start heavily modifying the bike, though reprogramming the advance curves may be to your benefit.

So why did wasted-spark and single-fire systems become a topic of discussion? I think that occurred in the Shovel and Evolution era. Mikuni has a great article covering this, and I agree with them completely. In short, wasted-spark ignition and mechanical advance did fine until the days of the cone motor, when environmental factors really started crunching Harley. Harley used very lean carburetor settings, lackluster cams, and restrictive mufflers to keep noise and pollution in check. All of these items caused the bikes to run very hot, increasing the chance of detonation. In order to keep detonation at bay, Harley implemented very conservative ignition curves with the advent of their electronic ignition.

Riders quickly found that there was a “magic recipe” to unlocking lots of power from an Evolution or a Shovel: Cam it, jet it, and fit less restrictive mufflers and air cleaners. Then, get the fire to happen at the right time. (This is the same stuff many riders do today, only they had a bigger effect back then, because the factory pieces really left a lot to be desired in terms of performance.) Boy howdy, did those bikes wake up! Fitting an aftermarket ignition module allowed the use of more aggressive ignition curves, improving the potency of the aforementioned modifications. It just so happened that these ignitions also, in many cases, were single-fire. The improvement came from the more-aggressive advance curve, not the single-fire nature of things — but that’s not what people remembered. They remembered adding another coil and converting to this new fancy “single-fire” system, and that’s what they told their friends.

Thus, if you have one of these older bikes, the ignition curve is likely not tuned for anything other than efficient operation with low emissions, power be (more or less) damned. It’s probably fine for your old war horse if it's box-stock. However, if you’re spinning very high revs or you plan on running cam(s) with huge overlap or duration numbers, different ignition maps may help. Your stock system likely produces spark of satisfactory strength. Instead, it’s the distribution that you might be able to tweak to eke out just a little more power. If you’re gonna run some crazy compression, stronger spark may be needed to keep from “blowing out” like a birthday candle… but odds are you’re an accomplished engine builder if you’re at that point.

Why things are the way they are: Engine timing Lemmy