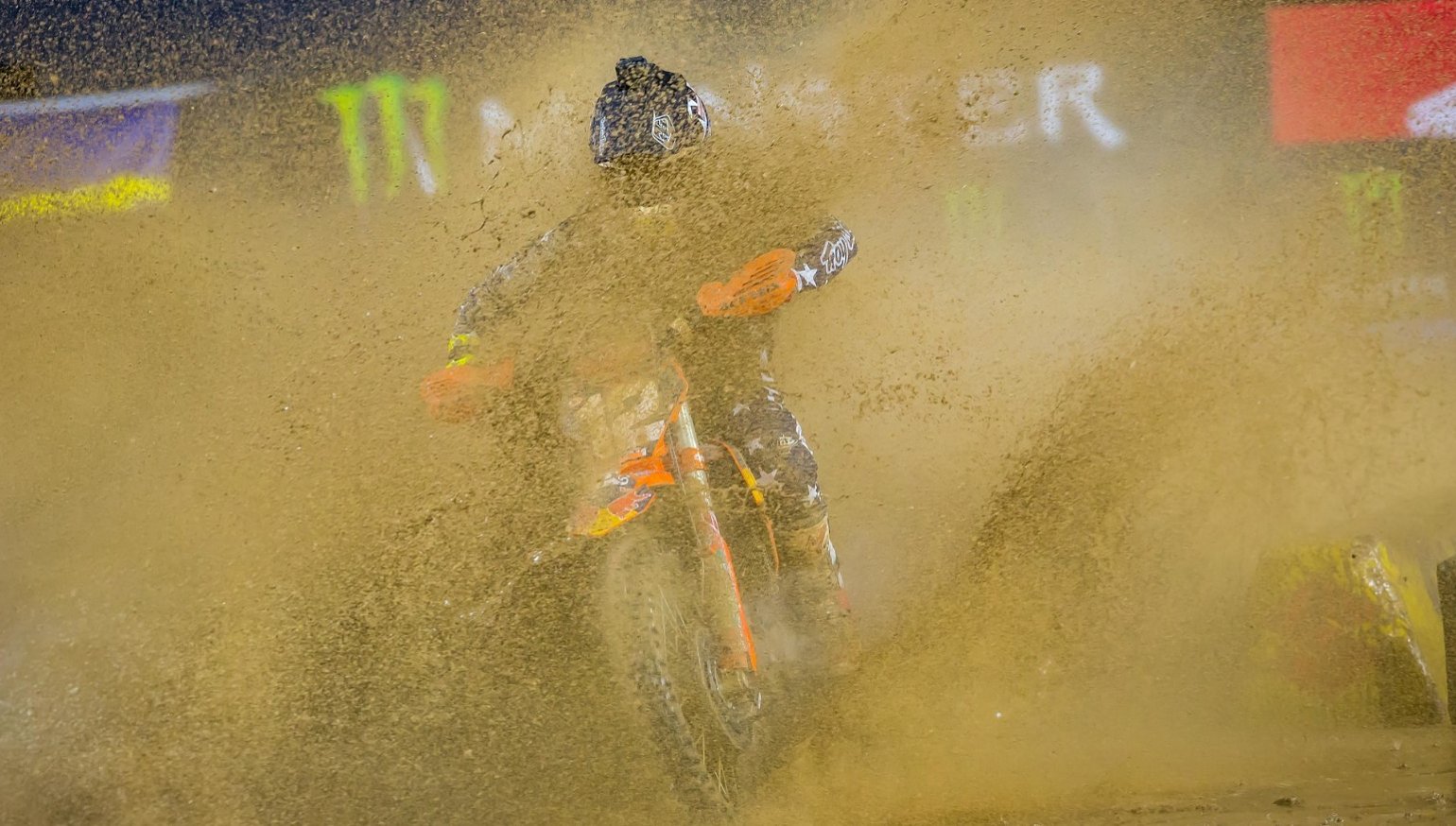 Several Monster Energy Supercross riders who should be out practicing this week aren't even able to sit comfortably on a motorcycle because of burns they suffered in Saturday's race in San Diego.

Rain swamped the track and riders blamed a chemical drying agent for causing rashes, itching and burns, as well as damaging the motorcycles. Riders posted on social media that sensitve areas like genitals and nipples were particularly affected but the damage was general. Some said the worst area of the track was a puddle in the start area where a lot of drying agent had been applied, and when the pack raced through that water, it was thrown on everyone.

Some racers talked of metal frames and other parts so badly damaged it looked like they'd been siting outside for years and anodized finishes being burned off.

Not all riders were affected, but several were. Ken Roczen finished third in the 450 main but said his "nipples are pretty much gone" from the chemical burns he suffered.

Yesterday was a crazy day! I won my heat race and pulled a massive holeshot in the Main only to throw it away in the second turn 😡 i guess i was in second the whole time and then i got passed on the last straight away to go back to 3rd 🥴 Podium finish in these condition is fine by me and also sitting solid In points leaving the west coast. 🤙🏽 thank you peeps. 🙃@honda_powersports_us @redbull @foxracing @goartofsport @canyon_na @stancesocks @breitling Ps. Me and other riders had problems with getting burns and rashes from the lime. It’s so bad that i can Barely sit today for real! Nipples are pretty much gone too lol. This sucks

Vince Friese posted a closeup photo of a burn.

Typically I would be at the track riding right now or in the gym. But someone made the call to put a chemical that’s known to burn skin in the dirt that they knew would be all over the skin of 80 or more riders. Is everyone just ok with this?

Vann Martin said he had burns on various parts of his body and his buttocks were worst, but he stopped short of photographing those for Instagram.

I’m all messed up from the weekend. Burns all over my body from the lime in the dirt. Swipe left to see the burns on my legs. My legs, stomach, chest, shoulders, nipples, butt, and balls are all scraped up. The bottom of my butt cheeks are by far the worst but I didn’t feel it would be appropriate to post haha. It’s rough. Burns bad still. I feel for all the riders that have the same affects and for all the mechanics that are having to put in the overtime. @supercrosslive @feldstudios @feldstudios #ama #americanmotorcyclistassociation

Tyler Bowers posted a photo of a discolored lever, said he was suffering from burns, itchiness and a cough and added, sarcastically, "thanks for the lasting damage to my body and ruining my bike!"

Just finally able to come inside and get into bed after a long day handling this mess. Thanks to a great group of friends that had my back when I was in need today! @gday795 @bp412 @ahmfactoryservices @laird151 My body is hurting pretty bad, some nasty burns in the creases of my elbows, chest, stomach, glutes, itchiness almost all over, scabbing on my nipples, and a random cough at times. This was a good one guys thanks for the lasting damage to my body and ruining my bike!

Mechanic Clint Lund posted a short video of damage to the bike and said his hands were burning from working on it.

The AMA issued a statement saying it was investigating:

"The American Motorcyclist Association is coordinating with AMA Supercross Championship promoter Feld Entertainment to identify riders and equipment that may have been affected by track conditions at the Feb. 2 event at PETCO Park in San Diego.

"The well-being of our members is a top priority of the AMA," said AMA Chief Operations Officer Jeff Massey. "AMA staff is monitoring the situation and working directly with Feld Entertainment as its representatives contact individual riders to assess the extent of the impact."

On Saturday, February 2nd at Petco Park in San Diego, Ca., Supercross riders were affected by a drying agent applied to the dirt track, which may have caused skin irritation and damage to their bikes. The wellbeing of our riders, their teams and our crew is always a top priority for us at all Supercross events. Given last week’s forecast of rain for Saturday’s event in San Diego, the track crew took normal precautions to ensure a safe and raceable track. Prior to the qualifying rounds and main events, they removed the protective tarp and applied a drying agent, a lime and sand mixture, to treat two areas on the track to try and remove moisture from the dirt. This process has been used safely for decades at Supercross to dry dirt and thereby reduce the risk of accidents for the riders. It appears that the unprecedented amount of rain on Saturday prevented the lime from mixing with the soil as usual. This resulted in splashing of the riders and their bikes, which may have caused skin irritation to some riders and damage to their bikes. We are currently reaching out to each rider who participated in Saturday’s race to assess the extent of the impact, ensure their welfare and get them back on their bikes racing. We are also reviewing our existing processes to deal with excessive water on the track to prevent a recurrence. 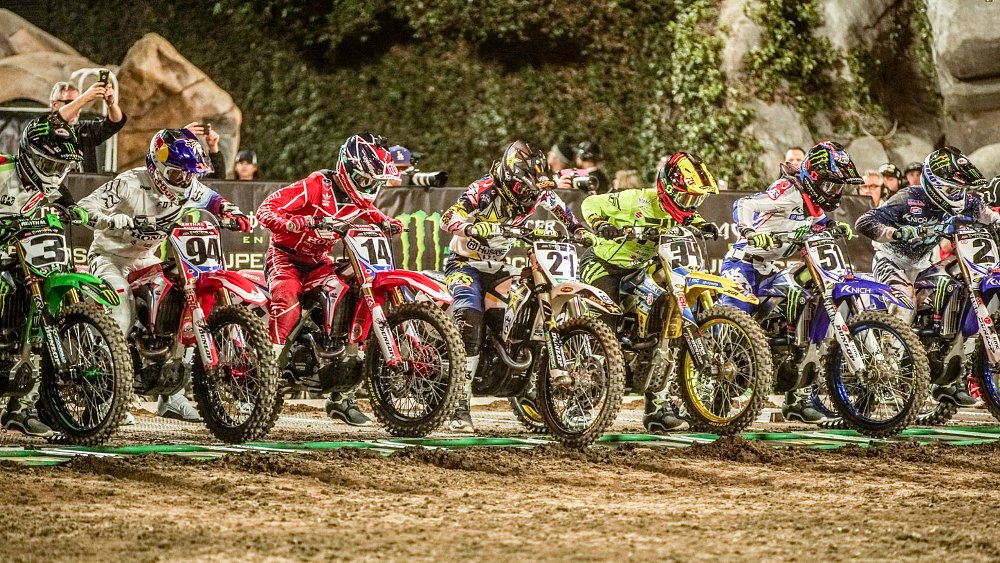