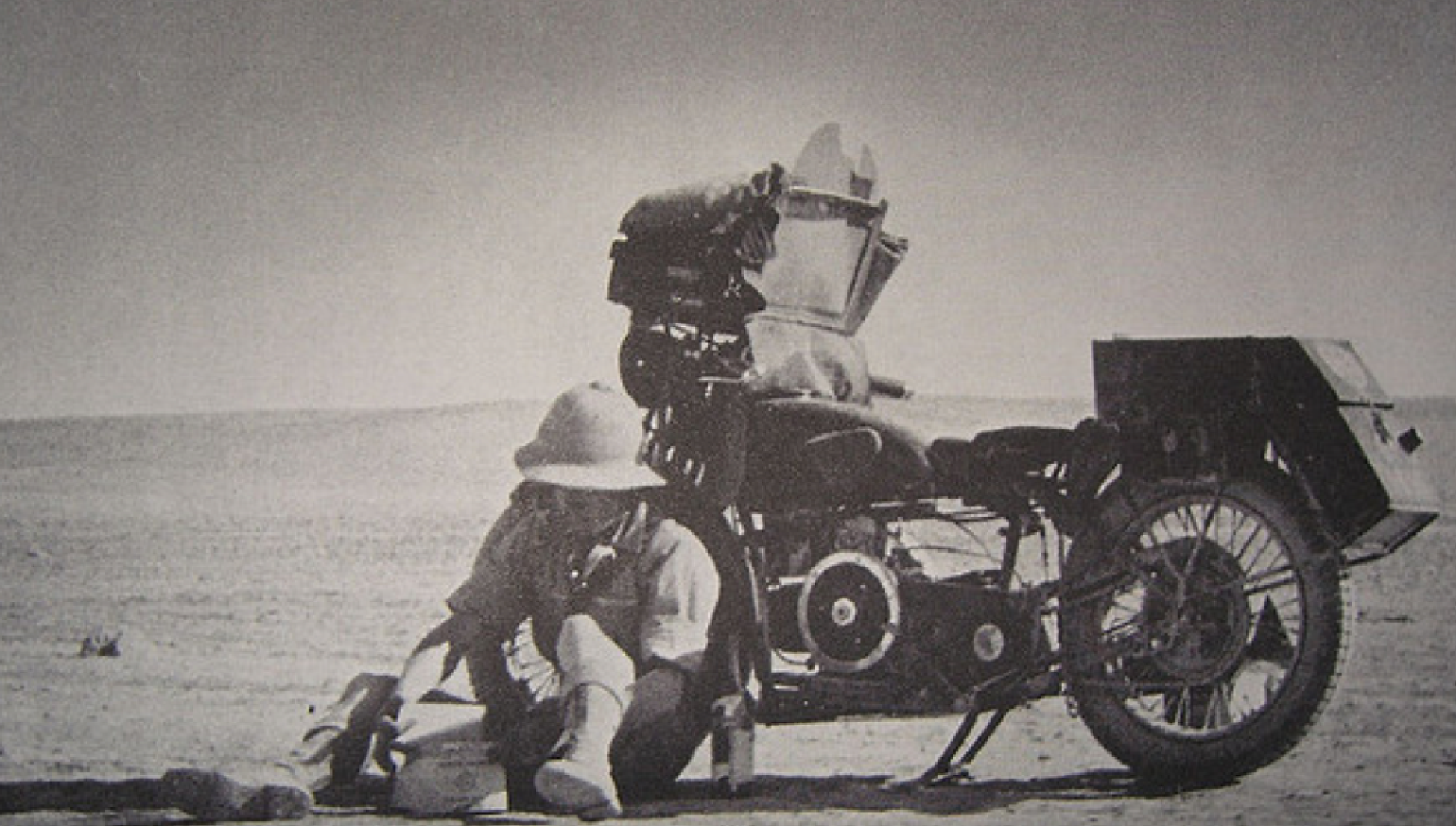 Solo around the world in 1932: The Robert Edison Fulton, Jr. story

On this day in 1909, one of motorcycling’s greatest adventurers, Robert Edison Fulton, Jr., was born. That’s why today’s article is a look at his life, journey and legacy.

One of motorcycling’s greatest adventurers, huh? If a 1930s solo circumnavigation by motorcycle doesn’t put a rider in that pantheon, I’m not sure what does. Fulton’s 18-month journey (1932-33) on a modified Douglas twin (six horsepower!) brought worldwide public exposure to motorcycles and what they could do. His trip also recorded the world as it was in those days, when much of Asia was still under colonial rule, maps didn’t exist for some of his route, and many people had never even seen a motorcycle.

Fulton believed that with a name like his, he was bound for an interesting life. Named for both inventor Robert Fulton and his father’s friend, Thomas Edison, his childhood was spent traveling and learning about machines, buildings and the sciences. His parents’ wealth allowed him to experience the world as few others did, including a trip to the opening of Tuthankamun’s tomb in 1923. After graduating from Harvard with a degree in architecture, Fulton’s future was open and full of possibility. But, as he begins the book, “The unheeding tongue may lead to torturous trails!”

The trip that would change his life started with an offhand comment at a dinner party, probably to impress the girl asking if he’d be sailing home after his graduate work in Vienna. ‘“Oh no,’” Fulton responded. “‘I’m going around the world on a motorcycle!’ Who was the more startled, the seven persons around me or myself, I really can’t say. I recall only that the moment I let that statement slip, I knew I’d done something inexplicably peculiar.”

Fulton didn’t know he was sitting across from Kenton Redgrave, owner of Douglas Motorcycles. Redgrave loved the idea and offered a free machine, plus any modifications necessary for the journey. Unable to back down from his bluff, especially now that a free motorcycle was at stake, Fulton bought some maps and got to work. Modifications to the Douglas included a second fuel tank, more storage, a windshield, and car tires in a common size for easy repairs and replacements. With the extra fuel, the Douglas could go 350 miles between fill-ups, averaging an impressive 50 miles per gallon. With the bike ready and “adventure...crooking her finger and beckoning,” motorcycle and rider set off into the unknown.

Fulton ditched some of his heavier gear in the early days of the trip, but a few essentials stayed. Maps and charts were essential for navigation, and a special toolkit kept him rolling (Fulton had just six flats, all rear, on his journey! The factory techs were the only ones to touch the front tire.) Thousands of feet of 35 mm nitrate film stayed in a dark compartment, and the movie camera rode up front in a case. Last, Fulton hid a revolver wrapped in oily rags between his skidplate and the engine, though he mostly used the .32 as a hammer by the end of the trip. No border guards ever found the stowaway.

Fulton’s odyssey took him across Europe, to the Middle East via Turkey, then through what’s now Indonesia to China, Japan, and the United States. Though he’d intended to study the architecture of the world along his trip, the people came to dominate his observations and recording, as well as his reasons for adventuring. Sure, he was shot at, harassed, and frequently in great personal danger, but people largely welcomed him, from nomads to rajahs. He later put all his journals together in a book, One Man Caravan (1937).

One adventure is enough for most people, but Fulton never stopped dreaming and exploring. Right up to World War II, he worked as a videographer for Pan-Am, documenting their air-over-ocean flights using the new “Clipper” flying boat. During the war, he designed and built tailgunner simulators for training Air Force recruits. Other highlights from his decades-long, 70-patent career include the Airphibian flying car and the Pentagon’s Skyhook, seen famously in the fourth James Bond film.

Fulton is remembered as an explorer, an innovator, a writer, and a motorcyclist of rare caliber. His passing in 2004 saw the conclusion of a life well lived. If you’d like to learn more about his journey, get a copy of “One Man Caravan” (about $15 to $25). You’ll be glad you did. Fulton’s storytelling is insightful, humorous, and never boastful. If you’d like riding to shape your life, just read what it did for him.

The art of doing: One man's journey across the globe Spurgeon Dunbar