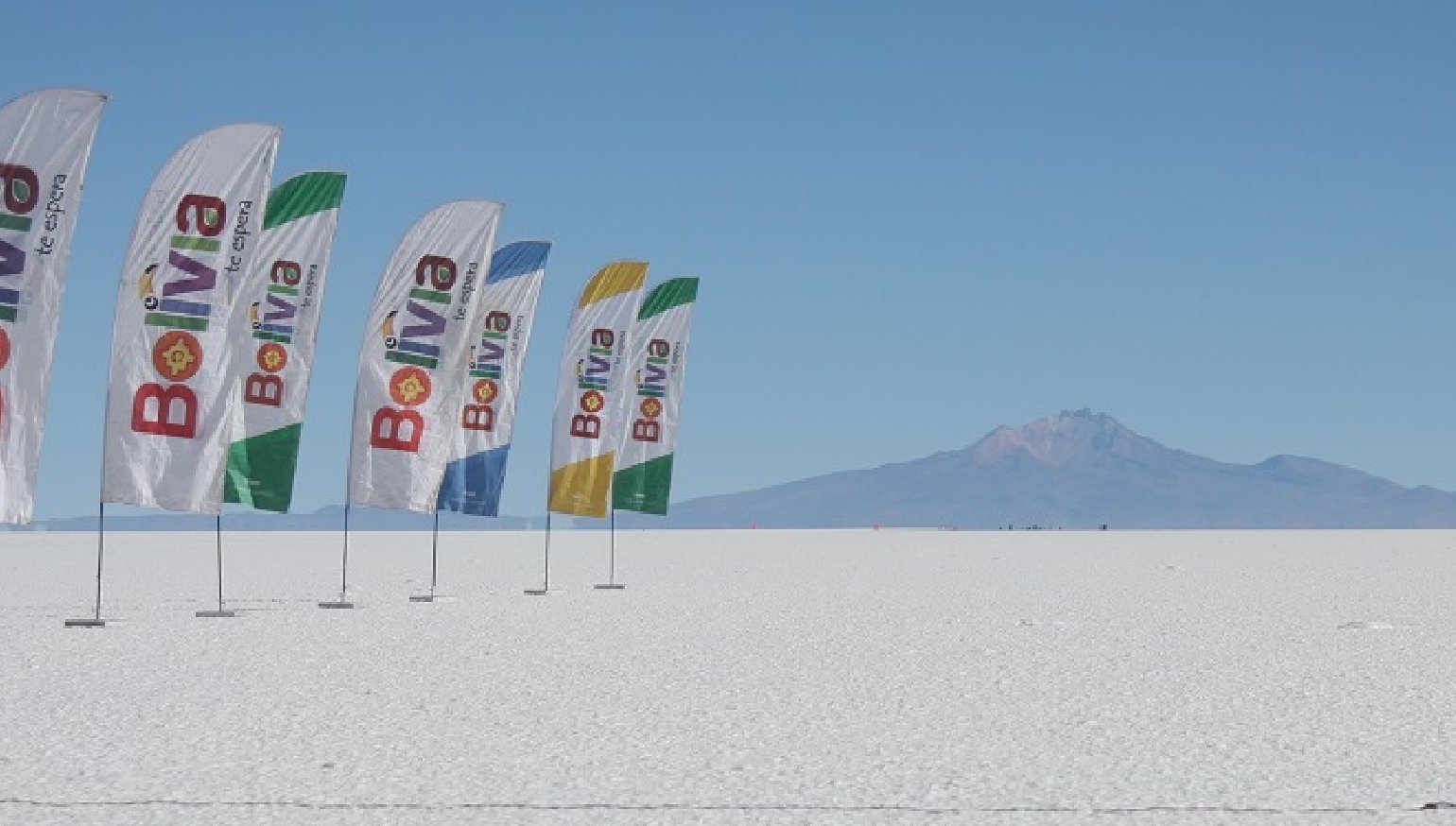 Just aim for the volcano: Seeking 400 mph in the mountains of Bolivia

There are dozens of obscure land speed records recognized by the FIM — classes based on engine displacement, bodywork and streamlining, and whether engines have a turbo or supercharger. But Mike Akatiff has only ever cared about The Big One: the outright FIM land speed record.

Akatiff first set it in 2006, on the Bonneville Salt Flats. Or, to be precise, an ex-Camel Pro flat track racer named Rocky Robinson drove Mike’s streamliner to a new FIM world record of 342.797 mph. He held the record for two days, until the streamliner owned by arch-rival Dennis Manning went over 350 miles an hour.

Records are records, but if you’re a land speed racer, those round numbers ending in 00 are special. At Southern California Timing Association events, the most prized awards are embroidered ball caps for people who’ve entered the “200 mph Club” or 300, or... No motorcyclist has ever entered the 400 club. Only a handful of wheel-driven car drivers have earned one.

Suddenly, the 400 mph barrier seemed tantalizingly close. Akatiff, Manning and Sam Wheeler (another owner-driver with a very well developed streamliner) all knew that only one of them could be the first to 400. It won’t be Wheeler, who crashed and killed himself in a test run last year. It was also becoming clear that 400 mph wasn’t likely to happen at Bonneville, where the surface has steadily gotten worse in recent years.

That’s what led Akatiff to the Salar de Uyuni in Bolivia, 12,000 feet high in the Andes Mountains of Bolivia.

An otherworldly place for word-record speed

The Bonneville Salt Flats are about 40 square miles in size. The Salar de Uyuni is about 4,000 square miles. It’s so expansive, and so flat, that NASA uses it to calibrate the altitude of satellites. The salt is thicker and drier than Bonneville’s. The thin air at that altitude poses no problem for the turbocharged motors used in virtually all streamliners and it causes less drag.

The Salar is not conveniently located for a race team in Calfornia, however. Running Ack Attack requires a team of about 25 people; Akatiff also brought in Mike Cook, who is vastly experienced in preparing salt courses, and Charlie Hennekam, the FIM official in charge of certifying record claims. Coordinating all those schedules, with the necessary permits, left Mike with a five-day window for his semi-private “Top of the World Land-Speed Shootout.”

What did it all cost Akatiff’s long-time sponsor, Top 1 Oil? If you have to ask, you can’t afford it.

Cook laid out a course fully 15 miles long, but he could’ve prepared a 100-mile course if needed. The salt was as hard and smooth as concrete. Akatiff knew that if he was going to go 400 anywhere, it would be there. There was only one catch: His streamliner was missing.

How do you say “logistics” in Spanish?

The idea of running on the Salar first occurred to Akatiff more than a decade earlier. Mike convinced Hennekam, to check out the site while he was in South America on other FIM business. At the time, the only road into the remote area was dangerous and unpaved. The FIM’s South American delegate warned that an American team could well be robbed or kidnapped.

A lot has changed since then. Chinese mining companies realized that the Salar is the world’s largest lithium deposit, just as demand for the rare metal soared, for use in everything from iPhones to Teslas. The Chinese built a new highway into the region from La Paz and developed a modern airport in the nearby town of Uyuni. The promise of a revenue stream gave the Bolivian government an incentive to improve the region’s security. The Salar became part of the Dakar Rally route in 2014. The massive increase in tourism and awareness encouraged the Bolivians to support other motorsports activities on the Salar.

Akatiff conferred with his main sponsor, Top 1 Oil, and shifted his 2017 racing plans from Bonneville to Bolivia. Even with new highways and airports, the logistics challenge was massive. The streamliner itself, along with fuel and parts, fills a 40-foot shipping container; several 20-foot containers also had to get from California to the Andes, including one that was supposed to arrive early, with a custom-made demountable ‘salt drag’ for Mike Cook’s use. In the hope of defraying costs, Akatiff invited his longtime rival Dennis Manning, and a Triumph team that had tried for 400 mph, unsuccessfully, at Bonneville. They both demurred, although three other teams brought “sit-on” motorcycles.

None of the containers came close to arriving on time. Only one 20-foot container, with Ralph Hudson’s 1000 cc turbo-class bike and a conventionally aspirated Aprilia belonging to Nick Genet and Mike and John Salimbeni, arrived in time for a ceremony hosted by the president of Bolivia. (The “sit-on” bikes all set records in Bolivia, and I’ll be writing up an account of their trials and tribulations for a later post.)

Meanwhile, the tramp steamer with Akatiff’s 40-foot container arrived at the nearest port, in Chile, on schedule — only to find that the tide was too low and it couldn’t get into the harbor. The captain decided to continue to his next port, in Peru, where he could unload enough cargo to reduce the boat’s draft.

By the time the team was finally ready to run, only two of the five days were left. Then they found another problem with the streamliner. The brakes weren’t working.

Put yourself in Rocky Robinson’s Nomex shoes for a moment, now. Of all the people on the team, you’re the one most obsessed with that 400 mph record. But you’re also the only person who puts his life on the line to get it. The last thing you want is a bunch of guys hurrying to meet a deadline as they bleed your brakes.

On August 6, they were finally ready to race.

Rocky took off on an initial shakedown run, heading away from the pits, down the course which had been laid out so drivers could use a large volcano on the horizon as a landmark. All he had to do was aim at the volcano and somehow average 400 mph.

After they adjusted the fuel map, Rocky made a return run with a goal of confirming that slight changes to Ack Attack’s aerodynamic package, new parachute doors added over the winter, would not harm the handling at 300-plus. On that run, they had a shifting issue, and one motor never got out of fifth gear.

At the end of that run, “I toggled the gear down, the ‘training wheels’,” Rocky told me, “and I heard it start to go but it stopped only part-way deployed.”

He carefully brought the machine to a stop as close to the pit crew as possible, in the hopes that someone would realize what was wrong. At the last moment, several people ran up and barely prevented it from toppling completely over at a dead stop. Damage was limited to one of the gear doors.

On the morning of August 7 — the final day of the meet — the team still thought their goal was within reach.

“We started him five miles back; a little further back than Bonneville,” Akatiff told me. “Our goal was not to get some gigantic record, just go a little over 400 and come back.”

Four miles into the run, just as Rocky shifted from fifth into sixth gear as planned at just under 380 mph, the twin Hayabusa engines’ output plummeted from the normal 700-plus horsepower. Listening from a distance, Mike thought they’d blown a motor. Rocky basically coasted three-quarters of a mile into the measured mile and still went through the traps at 331 mph. At that point, he had about seven miles to bring it to a stop.

Mindful that every minute counted, Rocky planned to coast back and bring it to a stop near the pits. Ack Attack is fitted with a high-speed and a low-speed parachute. Rocky told me that in all the years he’s driven it, he’s only pulled the low-speed ’chute a couple of times, in emergencies. But in that thin atmosphere, the high-speed chute hardly slowed him at all. He burned up the brakes and finally got the long, heavy streamliner to stop about a quarter of a mile past the end of the course.

Every land-speed racer knows exactly what you mean when you talk about “the Bonneville curse,” but Salt Gremlins are also found in Bolivia.

The first order of business was to diagnose the motor problem, which turned out to be a hose that had blown off the turbocharger. It was easy enough to reattach it and wire it in place. But the brakes were a bigger problem.

“Mike said, ‘You don’t need the brakes, because the parachutes will slow you down’,” Rocky recalled. “But we’d already had an electrical failure, and you need electrical power to open the parachute doors. I told Mike I’d run it with brakes and the tail doors in place, or without brakes, if the tail doors were removed.”

Erring on the side of safety, precious time was spent rebuilding the brakes again. While that was being done, Mike and Rocky also studied the data and video from the run, and realized how hard Rocky had worked to keep the machine on the 120-foot-wide racing surface. Those new parachute doors succeeded in reducing drag, but somehow induced instability; they decided to split the difference and run with them slightly open. Last but not least, they changed to slightly taller gearing. The techs who made that change would have preferred to take a link out of the chain, but there was no time.

Around 4:30 on that final afternoon, the team had one more shot at 400, but everything would have to go perfectly if they were to turn the machine around and make the required runs in both directions for a legitimate record, before dark.

“We weren’t fooling around,” Mike told me. “We started him seven miles back.”

It was not to be. Rocky actually smelled something, then felt something let go, and the power suddenly dropped off again. He pulled the ’chute while still in the speed trap.

It turned out that a different coupling in the turbo system had blown apart; a component that had never failed in a decade of running Ack Attack at lower altitude. It was harder to get at than the first hose had been. And, there was a last straw; the new, slightly larger rear tire was also damaged on one side — perhaps because the chain had rubbed it.

Ack Attack doesn’t really just get loaded onto a trailer. It travels in an elaborate cage, which was rolled into the shipping container and then lifted onto a semi-trailer. Fifteen years of Mike Akatiff’s life rolled off the salt and headed back down out of the Andes to the Pacific and eventually to California.

His story had changed a little by the time I talked to him on the phone a week later. We discussed the way both Al Lamb and Ralph Hudson came close to the 300 barrier on their 1000 cc partial streamliners. He was still marveling at how hard and smooth the salt is down there. He’d reviewed the data from Ack Attack’s MoTec ECU, and realized that until those coupling failures had occurred, Rocky had been right on track for a 400 mph pass.

So, the obvious questions…

I asked Rocky: “Do you want to go back?” He immediately said, “Yes, but I’m just the driver. It’s Mike’s toy.”

Mike said, “Well, if Top 1 wants to support us again…”

That sounds like three guys talking each other into going to Bolivia next year.

Dibs on going down to cover it.

How to get to Bonneville: Interview with Jack Broomall TeamZilla

Video: a father, son, motorcycles, and one of the world's unique places Lance Oliver