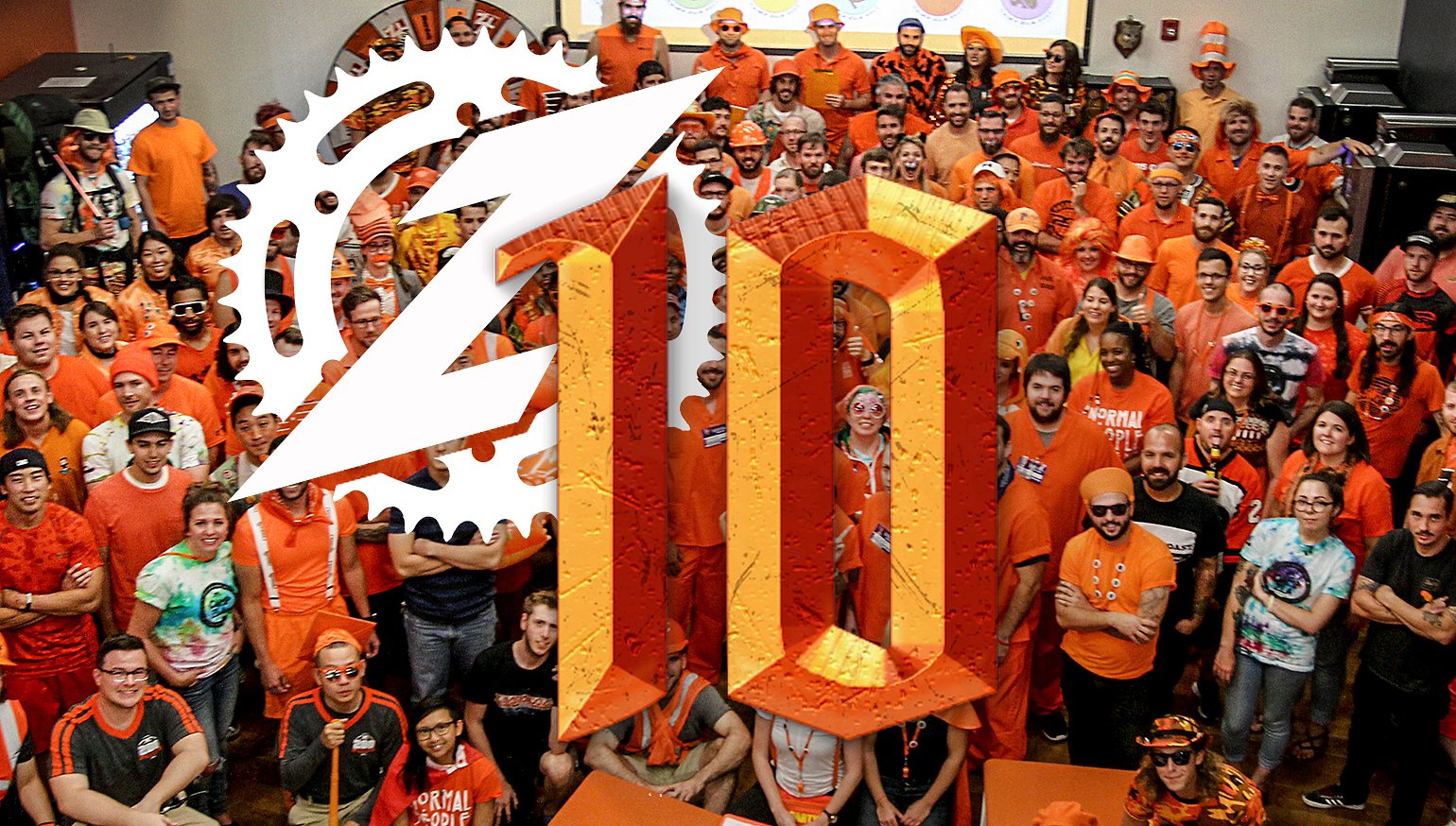 As you read this article, you may be thinking, “Hmmm, there’s something different here.”

It’s not the changing of the seasons, it’s not that Lemmy has gotten any less grumpy about bob-chobblers or that Spurgeon has once again changed the configuration of his facial hair (though he probably has). It’s the new platform RevZilla has been building for over a year. Much like the RevZilla you’ve come to know and love, nothing has changed about the people behind the scenes. But what has changed is the digital experience that is RevZilla.com.

But we’re not here to talk about the website. There’s a whole other experience for that where you can check out the new features in action as Lemmy and Spurgeon dive into the experience themselves. Instead, we want to introduce you to a few of the folks who’ve been at the core of the ZLA Army for the past decade. Because not only are we beaming with pride at the new experience we’ve created for you, the motorcycle enthusiast, but we’re also celebrating a birthday. RevZilla turns 10 years old today.

It was 10 years ago that Matt, Nick and Anthony started this adventure ride. After a decade of excitement, chaos and herculean effort, RevZilla has grown from those three founders into a group of more than 250 passionate moto, digital and tech geeks. Here are some memories of that ride from a few of the people who were there to see it.

What’s your favorite memory of working at RevZilla? Most of my favorite memories involve 38 Jackson Street. It wasn't the most attractive place to go to work every day. My wife would ask me when I got home, “How was work? What's it like?” I don't know if I was extremely truthful in telling her exactly what was going on.

The first six months were questionable. I started in February. It was very cold. There wasn't really heat in the building so we had space heaters surrounding our desks. I remember wearing base layers to work because once you sit down at a desk and stay sedentary, it's harder to stay warm. Then the power would go out because we blew a fuse because we had too many space heaters running. It was a rough start, but I understood what they were trying to do.

I'd just done a really long trip down to South America on a motorcycle and it was something I was really passionate about so I was excited to come in and be their first ADV expert. That was fun to bring my skill set to the table. So it was easy to look past the mouse shit on my keyboard and the cold and the rougher streets of South Philadelphia. It was all worth it.

What are you most proud of? I'm proud of what we've achieved as a company. A lot of people are in this business because they are passionate, which is great. But unfortunately, passion can only get you so far. You have to combine passion with technical and personal ingenuity. Customer service was brought to a whole other level and it was smart that the ownership looked outside the industry to bring in real, high-level customer service folks. It's why I'm here. I spent 15 years working in five-star hotels. I'd been a rider for 25 years. After a three-hour interview that I thought was going to be a 20-minute conversation, I walked out of there thinking, "These guys really understand what customer service is." It's not just following a set of rules, line one, line two, line three. It's not doing what's easiest or what's going to save us the most money or what's least inconvenient for us. It's doing what needs to happen to make that situation right for the customer.

What are you most proud of? I am most proud that it all stayed together through a level of growth that cripples most companies. The hypergrowth from 2011 to 2015 was dramatic. The best part of working at RevZilla is being a part of something that's taken on a life of its own and been a rocket ship and changed the way the industry manages content and purchasing and efficiency and supply chain. Having seen that firsthand and been close to that growth, it's invaluable. You could go to college and get masters degrees for decades and you'll never gain that experience.

What is your favorite memory? Interviewing fake bodyguards. Anthony, Nick and Matt were going to a Guns N' Roses concert and dressing up and they needed a bodyguard to stand by and play the part. So I had to put out a craigslist ad and I had to interview the people who wanted to be a fake bodyguard.

What are you most proud of? I'm most proud of our ZLAnthropy program, which is our employee volunteer and corporate giving. In 2014, we gave items to an elementary school in South Philly with high needs. That grew into a partnership with the school. RevZilla itself has donated over $16,000 to the school and employees have donated over $4,000 worth of supplies and spent over 80 hours volunteering with students. Since we officially started ZLAnthropy in 2015, RevZilla has donated over $80,000 to non-profits focusing on tech and education in the greater Philadelphia region. Employees have volunteered over 400 hours and have donated $8,600 worth of supplies and cash. It's so exciting.

What’s your favorite memory? In 2012, the partners shut down the company for the weekend and they put everybody on an airplane and we flew out to MotoGP at Indianapolis. We were experiencing pretty massive growth and it was a reward for the hard work and long hours we had been putting in.

That was actually the weekend Hurricane Sandy hit the east coast, which of course cancelled all our flights. We had to rent five minivans and we loaded up everybody after the race on Sunday and we drove overnight to get back to Philadelphia. Got a couple of hours of sleep and opened the business as normal Monday morning. But the best part of that memory was all of us in the minivan with Anthony driving, making bets and joking. We actually had a lot of fun. That was just as memorable to me as the race itself.

Where will RevZilla be in five years? World domination. That's kind of the joke. Where do I hope it is in five years? Probably larger and we've probably evolved four more times in the next five years but hopefully it's still a driven team of enthusiasts with a shared common goal. It's been a wild ride.

What’s the best part of working at RevZilla? I like how quickly everything changes. That might be scary for some people. When I first started, someone said to me, "It feels like a different company every six months." Now it's a different company every four months. Despite how quickly things do change, we enjoy a 90 percent retention rate every quarter, which for the pace of things is outstanding.

Where will RevZilla be in five years? Taking over the whole world! World domination.

What’s one of the fun parts of working here? Recently, I was speaking to a group of Temple students. I'm an MBA alum. A customer came up afterwards to take a selfie to send to a friend in India because I worked here. Obviously, I'm not Anthony, I'm not Lemmy, I'm not Spurg. I'm like, "Are you sure?" He was just so stoked to meet someone from the brand. It's pretty cool when you have experiences like that just because of where you work.

What is your favorite memory? July deals video, 2014. I was basically instructed to get on the 883 Sportster in cut-off jeans, cut-off shirt, an eagle mask and do a one-handed burnout. It kinda doesn't get any better than that.

What’s the best part of working at RevZilla? The people. That really comes down to the hiring process. You have to be an all-star if you work here. The partners really practice what they preach. It's not just bullshit. Whether it's Anthony, Matt or Nick, they're at the top when it comes to work ethic. That totally trickles down. They expect a lot from us, but if they ask you to run through a brick wall, I'm sure they'd be leading that charge. Sunday night I don't think about the dreaded Monday morning.

What’s your favorite memory? I believe it was the second Zillapalooza. We did this really wacky relay race out in the parking lot. We had these plastic seats with grab handles and wheels underneath. We had to kick hard to race backwards across the parking lot. Everyone's wheels fell off and it was just a whole mess. There were lots of scrapes and bruises and a little bit of blood but it was just a lot of fun because it was total chaos and one of the weirdest things I've ever done with a bunch of my co-workers.

What’s your favorite memory? I would have to say actually seeing this building for the first time. I think that was the realization that RevZilla as a company had made the leap from the small upstart to we're going to be a real company now.

What’s your favorite RevZilla special event? The best event always seems to be the paintball match. The level at which people take it seriously also reflects on people's personalities at work, as well. Full commitment to camo, getting geared up, instead of people half-assing it. We take things to the next level, whether it's paintball, dodgeball or whatever. Very intense.

What’s your favorite memory? The time we did the Harlem Shake video. It was shortly after we moved into this building in the Navy Yard. We were in the front of the building and the back was still a warehouse. We brought a horse in and the horse crapped in the vestibule in the front. The people in the building across from us, they didn't know what was going on. They were watching us. It was dark out so they could see inside with the light on. They were watching us make this Harlem Shake video and it was so much fun. That's something that will definitely stick with me.

Where will RevZilla be in five years? I would like to see RevZilla international in 10 years from now, whether it would be Europe or Australia or wherever. My personal choice would be Asia. I'd be there in a heartbeat. Go to open a RevZilla office in Asia.

It's been such a crazy ride here for the last five years, it's hard to imagine the next five. To see it become what it is now is just an incredible journey and I'm glad I was able to be part of that.