If you failed to look at your phone or visit the interwebs yesterday, you missed moto excitement. Individuals at Triumph’s dealer show in London began leaking photos of new models faster than a TR6 Trophy leaks its oil.

At midnight, rumors turned to facts as Triumph issued an official release of the new Modern Classic models for 2016.

These model releases were a long time coming. Much like Adele’s latest single, news and rumors have been dominating the motorcycle community over the past 48 hours.

Reports and leaked photos started pouring in yesterday via Instagram and Facebook. It appears as though Triumph believes motorcyclists are looking for increased power and reduced weight without compromising the style that has been the hallmark of the range. As the dust begins to settle at the rumor mill, we are left with some hard facts from Triumph. In the coming year, we have five new models to look forward to. They’ll be sporting three new engines, six aesthetic “Inspiration Kits,” and one performance race kit.

Across the board, all of the new bikes will receive a six-speed gearbox. ABS and traction control are also now standard, along with a throttle-by-wire system said to improve fuel efficiency up to 36 percent in the 900 cc engine. Slipper clutches will now aid Modern Classic riders in making seamless transitions through the gears.

The entry-level bike in the new Bonneville lineup will be powered by a new 270-degree, 900 cc “high torque” engine, putting out almost 60 foot-pounds of torque. That’s an 18 percent increase over the previous 360-degree version. The style update, which extends to the wheels, lends the Speed Twin a much more modern look while still maintaining the overall lines that have made the Bonneville a success.

The T120 and 120 Black Triumphs come with an all-new, 1200 cc “high torque” eight-valve, parallel-twin powerplant. Unlike the previous 865 cc engine, this engine will have a 270-degree crank and lay down 77 foot-pounds of torque at 3,100 rpm. For the mathematically challenged like me, Triumph spells it out: It’s a 54 percent increase over the previous version. In addition to the aforementioned upgrades, the T120 and T120 Black will have traction control systems boasting two different rider modes (Road and Rain), LED headlight, and dual-disc brakes at the front wheel.

In addition to the 160 different Triumph accessories that will be available for these two bikes, shoppers can elect to purchase a “Prestige Inspiration Kit,” which includes a restyled seat, special tank badges, engine covers, and grips as well as a Vance & Hines peashooter-style exhaust.

These new Thruxtons are the flagship bikes of the Bonneville line, receiving the most powerful “Modern Classic” engine to date. Both of these bikes will be powered with a “high power” version of the 1200 cc eight-valve engine found in the T120 series. With almost 83 foot-pounds of torque at 4,950 rpm, power is increased over the previous Thruxton by 62 percent. But that’s not all.

Gone is the clunky 18-inch front wheel, replaced by a 17-inch unit that will make fitting performance-oriented tires a lot easier. After a six-year hiatus, clip-on handlebars are back. (Comfort be damned, people, this is a performance machine!) Riders have three traction control modes to choose from: Road, Rain, and Sport. Sport mode, unsurprisingly, will providing the most immediate throttle response.

The R variant of the Thruxton includes a few more premium pieces of kit, beginning with the brakes. Dual floating discs, racing monobloc calipers, and a Brembo master cylinder handle stopping duties up front. Suspension comes in the way of a fully adjustable Showa Big Piston fork up front, and Öhlins-sourced shocks at the rear. Tires are Pirelli Diablo Rosso Corsas, a huge improvement over the Lasertec that furrowed many a rider’s brow in years gone by.

For both variants, riders can choose to accessorize their bikes with either the Track Racer or Café Racer inspiration kits. The Café Racer sports a tinted fly screen, lowered clip-ons, a painted cowl, fender removal kit, and Vance & Hines exhaust, among other styling upgrades. The Track Racer package is the one that really appeals to me. It goes one step further than the Café Racer by adding a vintage-inspired sculpted cockpit fairing.

As if that weren’t enough, there is also a performance race kit available for the Thruxton R. While exact specs are not yet available, Triumph is promising even more power and torque, but less weight for those riders looking for increased performance on the track.

So there you have it. After three long years of rumors, the wait is finally over. If you’re anything like we are, you probably still have a few lingering questions. What are these bikes going to cost? What is the premium for the different “Inspiration Kits”? What are the finalized horsepower numbers? How will these engines measure up against the competition? What will these bikes actually weigh? We’re wondering, too.

I have no intentions of selling my well worn 2005 Bonneville T-100 anytime soon. It has earned its place in my garage by offering me years of dependable service and countless memories spread out across the country. I’m interested to see if this new lineup can elicit the same passion and dedication from a new generation of riders as the previous version has. If the performance can live up to the hype, I would say the chances are good. Even an old-school 865 cc diehard like myself can’t help but get excited by the look of that Thruxton R.

I wonder how much that Dunstall fairing is going to run me. 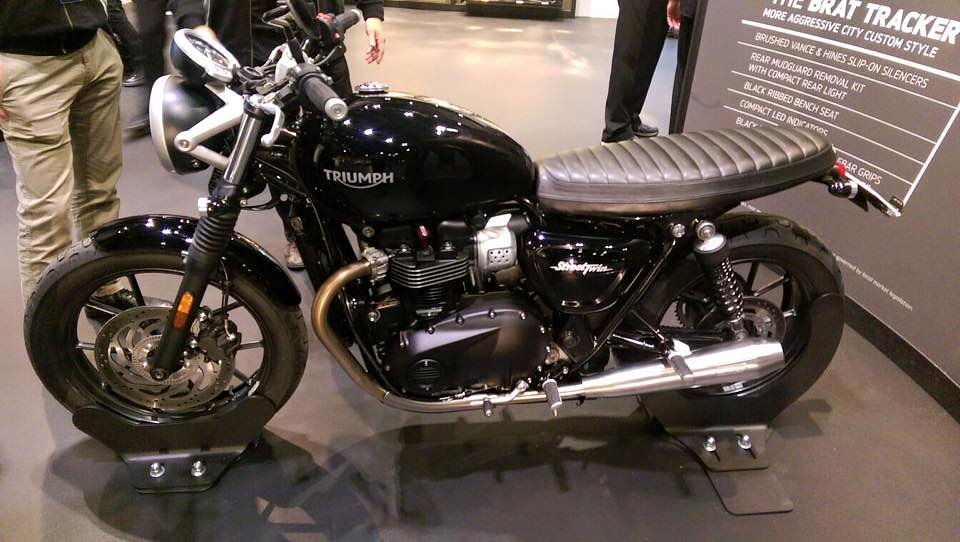