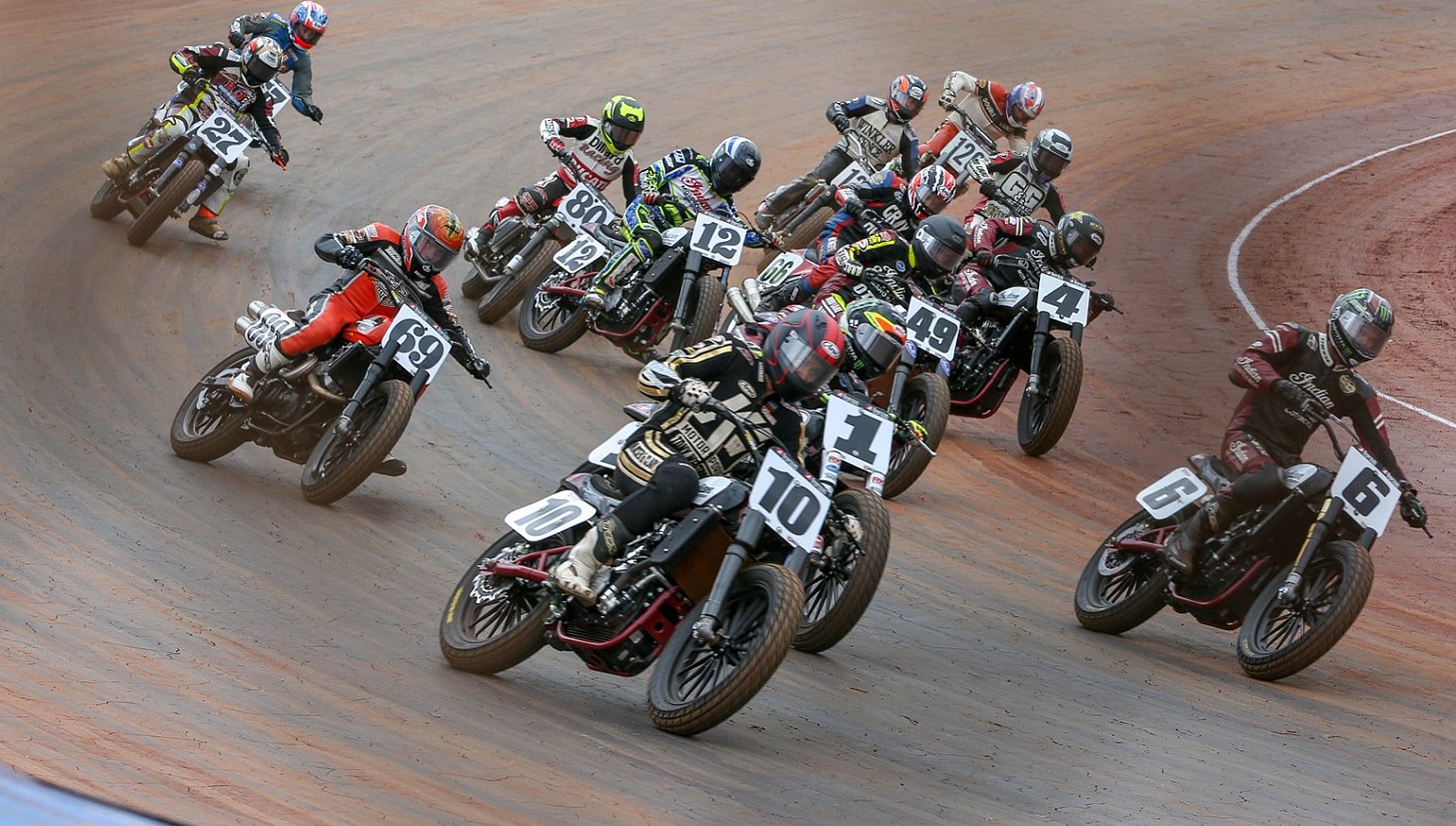 Mees culpa: This is not the first time the flat-track champ was accused of tire doping

Jared Mees utterly dominated the American Flat Track Half-Mile event in Fort Worth Saturday night. He was fast qualifier, won his heat race, and was never seriously challenged in the Main. So this story should be about a dominant rider, on dominant bike, at the top of his game.

But to write that story I’d have to ignore the elephant in the room. Because the day before the Fort Worth round, AFT basically accused its biggest star, on its biggest factory team, of cheating.

In a press release, AFT said Mees’ bike had failed a post-race technical inspection at the Atlanta Short Track, which had taken place two weeks previously. Lab reports indicated that his rear tire had been chemically altered. AFT punished Mees by retroactively disqualifying him from the Atlanta Short Track. He lost the points and prize money from the event and was put on probation for 12 months.

There was really no way to soft-pedal that one. In the space of a few hours on Friday, flat-track racing got more media coverage than I’ve seen since the old Camel Pro days!

But most of that coverage ignored the juiciest part of the story, which is that Mees was accused of cheating the very same way in 2015.

Per the current rulebook, AFT rule 3.8.b simply reads, “Tires: No chemical applications are permitted.”

American Flat Track — like MotoGP, World SBK, and MotoAmerica — is a “control tire” series. Dunlop supplies the same 19-inch DT3 tires to all AFT competitors. In the case of flat track, Dunlop’s control tire ensures more than just a level playing field. It also helps to keep speeds down in the interests of safety. There’s a lot more incidental contact in flat track than there is in roadracing, and runoff space is limited, by definition.

Flat-track racing has always been about traction, not raw power. Even in the old days, before control tire rules, everyone used the same basic tires (made by Goodyear, in the sport’s heyday). But until about 10 years ago, tuners cut extra grooves and openly “doped” tires with a variety of arcane chemical treatments in search of extra grip. I’ve been told that one of the most common ways to dope a tire was to soak it in WD-40, then put it in a black garbage bag and throw it up onto the roof of your trailer to heat up in the summer sun. You’d hardly expect a lubricant to increase traction, but maybe the heat drove off the slippery components.

Guys doped their tires in order to make them heat up a little faster or provide better cold grip. Most of the old pros in the flat-track paddock felt that doping could provide an advantage, especially in the first few laps. However, there were occasionally downsides; sometimes a doped tire worked better in the first few laps, but deteriorated faster at the end of the race. So a lot of tuners and racers experimented with it but eventually just said no to dope.

Back in 2015, when Jared Mees was accused of using a doped tire in the Du Quoin Mile, I was approached by several pro racers and team owners who were frustrated by what they saw as AMA Pro Racing’s attempt to sweep a cheating scandal under the rug. In order to break that story, I spoke to dozens of insiders and one of the things that I heard over and over was that when it came to tire doping, there was one acknowledged expert: Jared Mees’ tuner, Kenny Tolbert. That didn’t surprise me, because Tolbert’s probably the most successful active tuner, and he’s an expert on every aspect of machine preparation.

Although AMA Pro ultimately admitted that Mees’ Du Quoin tire had been doped, he was never punished for it. The organizers’ explanation was that they had accidentally (or incompetently, or perhaps willfully incompetently) let the tire out of their sight. It had remained in Mees’ race trailer until the next event, when Tolbert turned it over to AMA Pro’s tech inspector. The whole incident left the flat-track paddock with a bad taste (perhaps WD-40!) in its mouth.

In 2015, Mees was the lone Harley-Davidson rider capable of fighting for the championship with Bryan Smith on his upstart Kawasaki. Many insiders felt that AMA Pro was putting a thumb on the scales in favor of The Motor Company. I don’t necessarily agree with that position, but that’s what it looked like to some. In any case, AMA Pro seemed to learn from the Du Quoin scandal. The rules and procedures for taking tire samples were clarified.

The 2018 rule book has a two-page appendix that describes the tire-testing procedures in detail. The key points are that tire testing may be performed on the top-five finishers at any event, at the discretion of AMA Pro officials. Testing may be by durometer, a simple measure of compound hardness; sniffer, a device that checks for certain telltale volatile compounds, or — this is the big one — sample strips of rubber can be cut off the tire and sent to Blue Ridge Labs, where the samples will be compared to a benchmark compound supplied by Dunlop.

Blue Ridge Labs’ results are not subject to appeal. This draconian sentence is written right into the rules: [AMA Pro/AFT] “cannot be sued, litigated, or challenged based on the findings of the lab test.”

Tolbert also signed on with Indian as Mees’ crew chief and they put together a season for the ages. Mees won a record 10 races, stood on the podium in 17 of 18 races and finished nearly 100 points clear of his nearest rival (once again, Smith). AFT tweeted its congratulations for Tolbert's 90th career win as a tuner.

One of the many areas where Mees seemed to eke out an advantage was in coming off the corners. So sure, you could look at that and think, tire doping. But doping could not possibly account for beating the next-best guy, on identical equipment, by a hundred points.

The how and why of doping

Such as: How? Tolbert and Mees were working in their own small team in 2015, but they’re now part of Indian’s three-rider effort. Could they possibly conceal a doping program from their own teammates? (Answer: Yeah, probably; each crew chief operates with a lot of independence.)

More importantly: Why? On its face, it seems like a big risk for a guy who was a heavy favorite to win the championship anyway — especially considering that any rival willing to put up $1,000 could protest Mees’ tire and force it to be tested. (One person with knowledge of the situation assured me that the decision to take samples from four riders’ tires at Atlanta was not triggered by a protest. It was apparently a random decision by AMA Pro/AFT “for the first time in ages.” I presume that the reason tires aren’t lab tested very often is simply that such tests are expensive.)

A grizzled paddock veteran, pondering those questions, mused, “When I put my ‘tech inspector’ hat on, it’s obvious: Tolbert doped the tires. But when I put my ‘crew chief’ hat on it makes no sense. I guess the only explanation might be, it’s like the old parable of the scorpion and the frog. Why would Kenny cheat? For the same reason the scorpion would sting: It’s in his nature.”

I emailed, texted, and left phone messages for AMA Pro Racing/AFT and I was told no one was available to speak to me. Mitch Boehm did, however, forward the Competitor Bulletin.

Several other flat-track stakeholders spoke, texted, or PM’d me, but given the sensitive nature of this story none of them wanted to go on the record. (At this point, I am pretty sure that during the AMA Pro Racing onboarding orientation, newcomers get a whole workshop on the topic of Rule A.2.3.v which reads, “Circumstances under which it is permissible to talk to Mark Gardiner: none.”)

In spite of that rule, a person with no incentive to mislead me told me that Jared Mees had privately but vehemently protested his innocence. Is it possible Tolbert could’ve doped tires without his rider’s knowledge? I tried to get other pro flat-trackers to weigh in on this, but my deadline arrived before anyone got back to me.

I should also point out that there are people in the paddock who feel that at least occasionally, teams have been falsely convicted of tire doping. Skeptics explain those instances as the result of confusion at Blue Ridge Labs — although it is respected in the motorsports industry — or because some tires come from Dunlop contaminated. As conspiracy theories go, this one’s on a par with “chemtrails," but people have speculated that Dunlop secretly tests doped tires by allocating them to teams without telling anyone.

Of course, I emailed, texted, and left messages with Jared Mees and Kenny Tolbert, too. After a bit of a gap, Tolbert texted me back, saying:

"This is an unfortunate situation, we understand and respect AFT’s process and are complying with the decision they have made.

"Moving forward it was great to get a win last night in Texas. Now we are doing the one thing we can control: staying completely focused and prepared for the next 5 weekends of back to back races, and ensuring we continue what has been a very successful start to this season."

That sounds like Polaris Industries talking, not Kenny and especially not Jared Mees, a guy who revels in his status as a member of flat track’s “Michigan Mafia.” Jared’s favorite publicity photo shows him brandishing a set of brass knuckles.

But it amounts to an admission of guilt whether he was knowingly cheating or not.

Is there such a thing as bad publicity?

Friday’s distraction, if anything, seemed to make Jared Mees even more competitive in Fort Worth. His win, and bad luck for some of his key rivals, mean that he is again leading the championship, even without any points from Atlanta. He’s still definitely the odds-on favorite to repeat as Grand National Champion.

Friday’s announcement didn’t do any permanent damage to Mees’, Tolbert’s, or Indian’s reputations, either. No one who knows anything about flat track thinks those guys are the only cheaters. Shit, most flat trackers don’t even think cheating is that wrong. Getting caught is wrong, and getting caught but not punished is inexcusable. But flat tracking’s OGs became made men at a time when if you weren’t cheatin’, you weren’t tryin’.

Still, after the Du Quoin incident in 2015, Mees was singled out for at least one more unannounced tire test, so it’s safe to say that Tolbert will be rolling out strictly legal bikes for a while.

As for American Flat Track, AMA Pro/AFT appears to have absorbed the lessons of Du Quoin. This time, accusations of cheating were handled with much-improved transparency. I watched the Fans Choice TV coverage of the Fort Worth race, and to my eye, the event drew a pretty good crowd. My guess is that Friday’s tsunami of media coverage will prove once again that there’s no such thing as bad publicity.