The usual reaction would probably be, "Why would I do that?" The usual appeal of motorcycles built in China (or powered by engines built in China) is that they're cheap, and the usual approach to valuing a motorcycle is to consider the engine first. But the new Janus Halcyon 450 is not your usual motorcycle and isn't aimed at the usual motorcyclist. It's very much a niche product for a certain kind of rider (and buyer).

If you're not familiar with Janus (and they're small enough that it's likely you aren't), read Mark Gardiner's story about how the company combines engines built in China with other motorcycle components sourced from all over and frames, bodywork and other pieces made by Amish craftsmen near the Janus headquarters in Indiana. Janus builds its Halcyon 250 by hand and to order, with prices starting around $7,000. As Janus co-founder Richard Worsham told Mark, "They go 70 miles an hour. How much faster do you want to go on a daily basis?"

Well, it seems some people do want to go faster so now we have the Halcyon 450.

"Our goal was really to make it highway-capable," Worsham says in the video. It's "not designed for trans-continental touring," he notes wryly, but he said it has been tested at speeds above 90 mph.

To accomplish that, Janus buys engines from Italian firm SWM that are assembled in China, a fuel-injected, four-valve single (don't be fooled by the two exhaust pipes, one for each exhaust valve). Just as the Halcyon 250's engine was a descendant of the Honda CB125's powerplant, the new bike is powered by a single that is traced back to the engine in the old Honda XR400.

Unlike the Halcyon 250, which is a hardtail, the 450 gets rear suspension to handle the higher speeds and power and make the bike comfortable. The Brembo brakes on the 450 are also a step up from the 250. Claimed wet weight is 360 pounds.

Of course the appeal of a Janus is not its specs or its performance. It's about its style, feel and the fact it's built by hand just for you. The buyer chooses the final details, from pinstriping to the leather luggage.

Worsham breaks down the details in the video below. 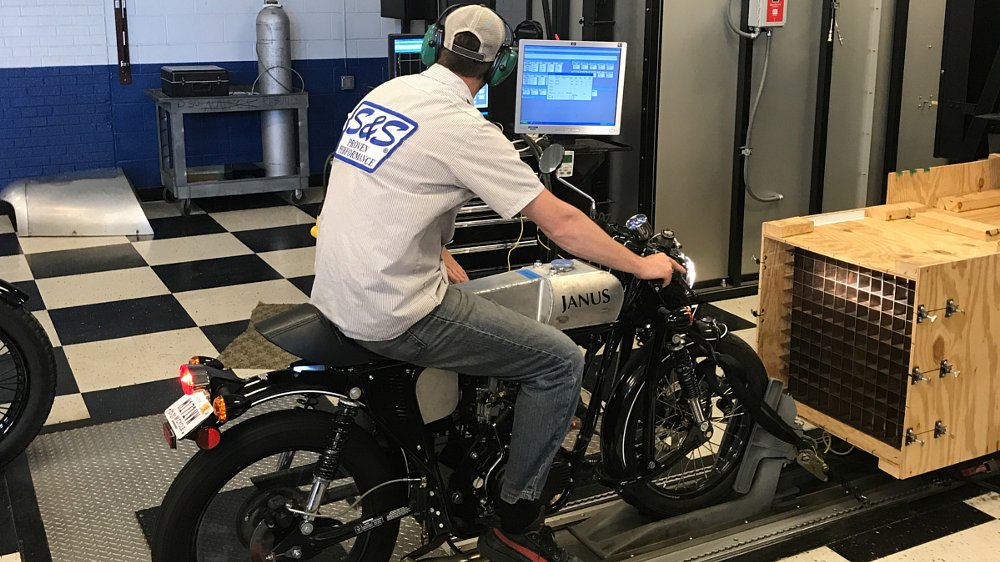