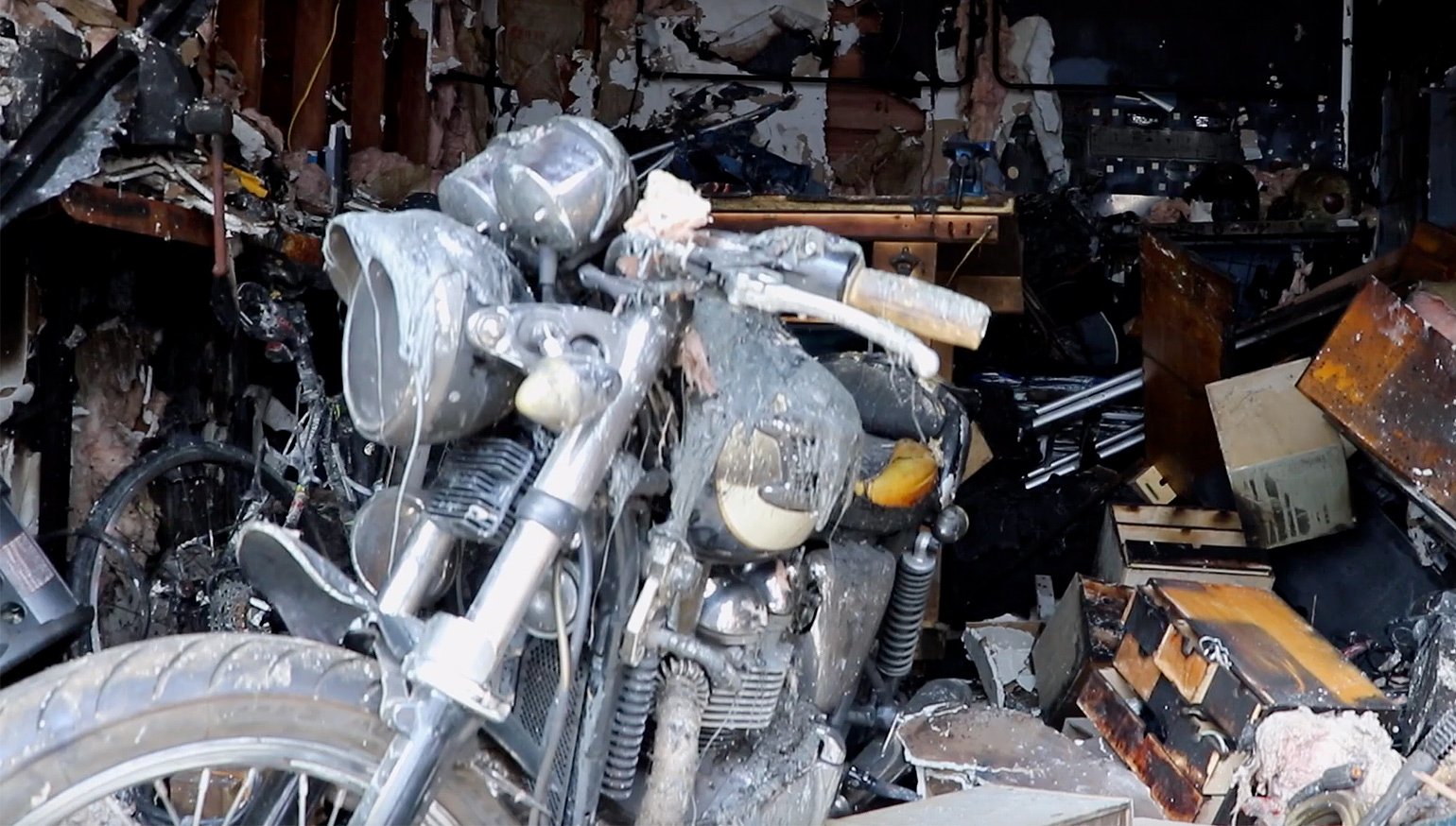 Interview: Ultimate motorcycle karma, and the filmmaker who captured it

On February 10, 2019, motorcyclist Vincent Nicolai was in his garage when propane fumes ignited and exploded. Nicolai nearly died in his attempt to put out the flames. If you follow moto news, you probably saw this story.

Nicolai suffered burns to 40 percent of his body, but he survived. His garage and its contents weren’t so lucky.

Of course, Vincent Nicolai isn’t your average rider. Through the Distinguished Gentlemen’s Ride (DGR), Nicolai had raised tens of thousands of dollars for men’s health causes, becoming a fixture in the NYC riding community along the way. When news of the explosion got out, riders immediately rallied to help Nicolai out. Now that he's on the other side of his recovery, someone had to tell his story. And that someone is Jean Pierre “JP” Kathoefer, the man behind johnnypuetz Productions. Kathoefer is a cinematographer, a rider, and a huge supporter of the motorcycling community. Just the man for the job.

The resulting film, called “The Distinguished Gentleman," is a 17-minute exploration of “the power of community in the face of hardship.” This is a story worth telling.

Kathoefer told us the story behind the film. It’s a remarkable display of solidarity among riders.

Andy Greaser: JP, how did you get connected with this project?

JP Kathoefer: It all started with The Moto Social, which has monthly events over the summer to bring the motorcycling community together in different cities. I knew one of the founders, Vik, and I ran into him by chance on my way to SoCal Supermoto School. We started talking and he asked if I had any projects going on. Vik’s from Toronto, and he knew I was always looking for stories to shoot, so he invited me to visit for the Toronto Motorcycle Film Festival. Maybe I could make a movie to show there? That’s a pretty long trip for me, but I knew if I had the right motivation, I’d go. So I started looking for a story. All to visit a friend… So I’m thinking, “I know I need a movie, but I don’t have an idea of what I’m going to do.”

Later, I went to a “Motos & Photos” night, and my friend Kirsten Midura was talking about Vincent, who I already knew, and his garage explosion, and that caught my attention right away. Kirsten and I started talking about the story more seriously, and she said this was a great story that had to be told. I asked her if she wanted to help, and she said yes, and that’s how it all started.

AG: So what’s the next step? How do you start making a movie?

JP: We didn’t want to make money for ourselves with this project, but we thought it would be worth asking for funding to have a more professional result. That way, we could hire more people, like an editor. Mikey Stojcevski from DGR was traveling in NYC, and I was able to meet him at an event in the city. I was kind of nervous just going up to him and asking, “Hey, are you Mikey? I’m doing this movie, and I need a little help.” I explained the story to him, and he loved it. He spoke to Mark (Hawwa) and the team, and they thought they could help. That was great news. Later, he told me “Don’t worry about it, we’ll make sure your costs are covered.”

At this point, I was like, “Oh shit, we have money!” As a German, I have to do things the right way, so I made a company for billing and taxes and all that. I reached out to Anna, a sound mixer whose work I knew. Somehow I convinced her to help us for free. But when we got the funding, I called Anna and said “I can pay you now!” And we got to work.

So we got Anna on board, we got an editor, we even had budget to fly Vincent out to the Toronto Motorcycle Festival and he wouldn’t have to pay for anything. It was amazing. But he called me and asked “Would it be OK if I ride with you there?” So now he’s actually riding out with us to the festival. That’s the kind of person he is.

AG: So DGR really helped you out. Any others?

JP: There has been so much support for this project. Triumph America reached out to us and said that they’d help help us with getting the message out, since both of Vincent’s bikes were Triumphs. Then there’s the whole motorcycling community, who raised lots of money for Vincent and helped him get back on his feet. They supported Vincent and his family in the same way that Vincent helped others before the accident.

AG: I think every story has a medium that best fits it, whether that’s a movie, a book, or something else. What makes film the best choice for this story?

JP: My passion is film, movies, videos, and everything I do is motorcycle-related. When I heard about Vincent, I knew that film was right for the story. There is so much emotion.

JP: It was not easy at the beginning, to find the right way to talk to Vincent. Not that he’s afraid of the camera. He likes to be in front, he likes to be in the middle of a picture. But still, you’re talking to him about a very emotional topic. As we get into his story, he starts to cry. He’s thinking about his son, his wife, how the explosion could have been much worse. It took a lot to work through all that emotion on camera. It’s a powerful story.

There was a moment I’ll call funny and sad at the same time. I asked his wife, Maria, to be a part of the film. It would be great to have her perspective. And the film needed that one piece to be complete. So I asked her, and she called me back to say that she’d do it, but she was afraid to lose it in front of the camera. She said, “I’m a teacher, and I don’t want my kids to see me cry on the internet.”

I totally understood, so I said, “How about this? We record it, and after it’s all over and edited, you can watch it, and tell me if it’s OK or not. If you say no, I won’t include it." She said, “OK, it’s a deal.” This is great. And we filmed her interview.

Two days before I was commuting to their house with the finished movie, Vincent says bring two bottles of wine and it’ll be OK. So I go out and get the wine. Vincent was right! Maria did get emotional and cry a bit, but she was OK. I was out of budget, and out of time so this was a big moment. It really worked for the film. Maria was great.

AG: It sounds like this film isn’t about the explosion, or the recovery, so much as it’s about the community. Is that what you wanted to show with this project?

JP: Yes, we wanted that to be the message. Like you said, it’s the beauty of the community, how they help each other. That’s the punchline. Vincent raised about $80,000 for DGR, and then riders raised almost the same amount for him and his family, paying for the recovery phase, all of that. It’s about the community.

AG: Where will people be able to see it?

JP: The film debuts at the Toronto Motorcycle Festival, and our movie will be shown on October 4. A week later, on the ninth, we will have the New York screening. We booked a movie theater at the Kickstarter headquarters, it fits like 100 people so you’re sitting close to Vincent and his family. Tickets sold out in less than 29 hours. You need to dress up for this one! Then it will be released online on October 10, via The Vintagent and the johnnypuetz YouTube channel. Finally, the Moto Film Festival Mexico will be showing it on October 10, and we're talking to a few other festivals, as well.

AG: What were some of the unique challenges of this project?

JP: There were a few problems, like when we lost some SD cards. But a real problem was that we did not have any B-roll of Vincent’s life before the explosion, which is this big part of the story. He moved to NYC from France, and there was not much footage from before he came to New York.Vincent had some pictures of his garage, but he couldn't touch it after the explosion for insurance reasons. We had to wait until he was allowed back in. I was there with the camera for the first time he opened the garage. The bike was there, and you could see that things had melted from the heat. He was feeling so much.

At the end of the movie, they’re pulling the Triumph out from the garage. And after they moved it out, someone said “Try starting it!” So they try to make it start and... it runs! Watch for that after the credits.

If you’d like to contribute to Vincent Nicolai’s fund, his GoFundMe can be found here. To get involved with DGR, head over to their site. The international ride takes place on September 29. 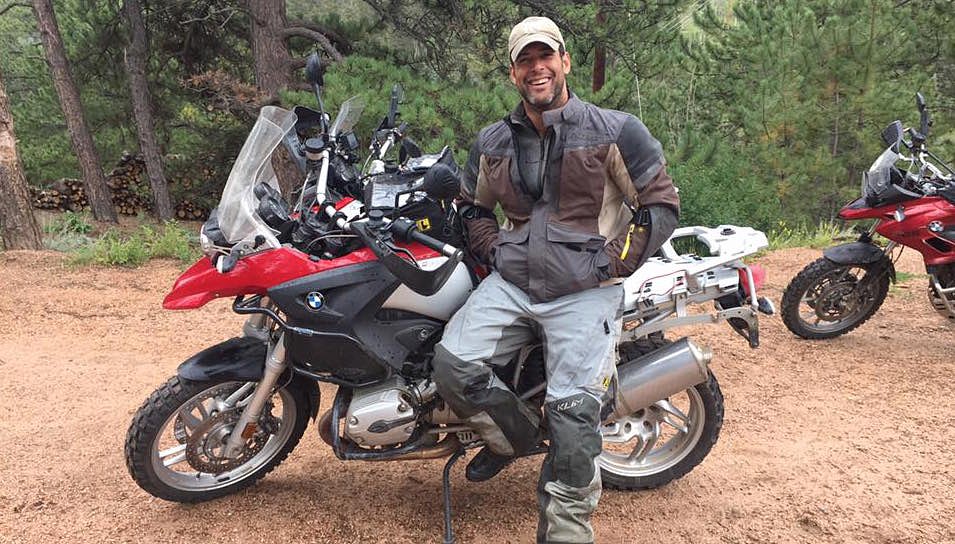