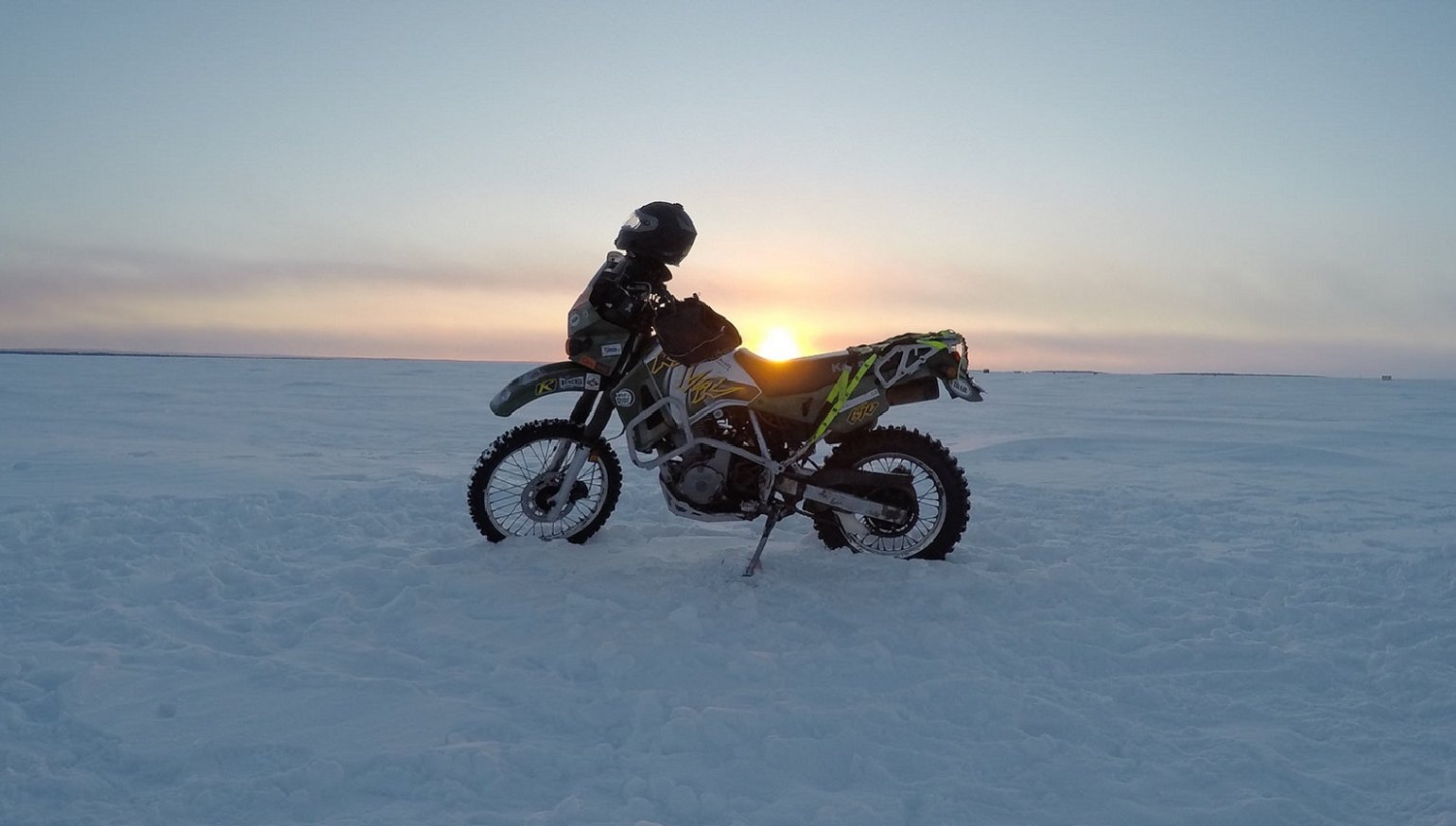 It’s already been dark for several hours when a frostbitten and half-blind Oliver Solaro rolls into the remote northern Canadian village of Shamattawa on his Kawasaki KLR650 under the northern lights.

The temperature is in the minus-30s and Solaro’s right eye has been frozen shut for the last couple hundred miles, most of which consisted of falling and dropping his Kawasaki every few hundred yards. In retrospect, he admits he may not have been mentally all there, due to the prolonged cold and physical abuse. Looking for shelter, he sees an old church with a light on. What he found, though, wasn’t what he expected.

Solaro isn’t in the military, or working an assignment of any kind. This is just what the 51-year-old Canadian does for fun. Since 2012, Solaro has been going on two-wheeled journeys, traveling around Northern Canada via the networks of ice and winter roads that are primarily utilized by transport trucks to haul food and goods to remote villages and mining equipment to the remote Arctic territories.

The ice roads, as they’re commonly known, crisscross the Northern Territories. Routes such as the Tuktoyaktuk Winter Road, which connects an array of otherwise inaccessible villages and mining operations to the rest of the highway network, cross the ice over rivers and the Arctic Ocean. The roads are so dangerous and the environment so hostile and unforgiving that when brand-new transport trucks costing hundreds of thousands of dollars go through the ice — often caused by pressure waves under the surface created by the large trucks traveling too fast — the insurance and transport companies cut their losses instead of jeopardizing more vehicles in a rescue attempt. Shipping companies anticipate losing 15 percent of the trucks and cargo sent out onto ice road routes.

“The very first time I did it, it was mostly just a bucket-list type thing that morphed into something else,” Solaro says. “I bought what I call a ‘disposable motorcycle’ for a grand or two thinking that if it all goes bad I won’t lose more than a few thousand bucks. I thought, ‘OK, let’s try this.’”

That first trip consisted of 6,000 kilometers of pavement and 800 more on gravel just to get to the ice road. “And then you don’t go more than 300 or 400 yards before you fall down. This went on for literally 500 miles,” said Solaro.

Solaro works as a welder for a mining equipment company, but in the past he has worked jobs ranging from customs broker to building choppers. He takes short-term contracts and “The rest of the time I try to be out on the ice,” he says. His travels are his priority.

After that first trip, “It ceased being a vanity project and quickly became a lifestyle. There was never a eureka moment. I just realized over time this wasn’t something I wanted to do as an endeavor, but as an existence.”

What he found in the church

Back to the original story, with Solaro half-blind, frost-bitten and desperately trying to find shelter for the night when he sees a church with a light on in the darkness.

“I enter the church and hear what I thought was a choir singing and I stumbled in and walk into a big open room and all of the sudden the choir and music stops,” Solaro says. “With my left eye — that still had some sight — I could make out what I realized was a little grey casket. I had just interrupted the funeral of a 14-year-old girl that’d taken her own life. And here I am, some dumbass wandering in from the road and walking into this funeral. I felt horrible and wished I could be anywhere else in that moment. The size of the casket really got to me too.”

What Solaro didn’t know was that Shamattawa was experiencing an epidemic of suicides among its young people.

“Luckily, they knew I had just come off a winter road and I had some frostbite on my face and they knew my intent wasn’t to interrupt or disrespect anyone. So, I sat through the service and after they fed me and had my eye checked out then put me up somewhere for the night. After a few days my left eye became normal again and my right eye returned after a few weeks.”

Canada’s Northern Territories become a different world in the winter. Everything is affected by the extreme temperatures. Your average motorcycle oil will turn to the consistency of Vaseline at minus 30 degrees. Aside from the use of a GPS Emergency Spot Beacon, the cold temperatures force Solaro to outfit himself and his bike with relatively old-school low-tech gear.

“It’s just me, my thoughts, my bike, my gun, my tent, and some trail mix,” says Solaro.

In addition to the lethal cold, wildlife is a real and present danger. Female polar bears with cubs become desperate and opportunistic, and therefore more dangerous to humans.

“The rangers won’t let me travel around up there unless I’m properly prepared and that means I have to carry a shotgun with me everywhere I go for polar bears,” Solaro says. “I carry a Mossberg 500 pistol-grip shotgun with a short barrel because it’s a short enough kit to be light and not take up too much space. The very first shot is a ‘banger,’ which just makes a loud noise to hopefully scare them away, and then the next round is a rubber bullet, and third, fourth, and fifth are lead slugs. The ‘Hail Marys’ I call them. I can also fire a 12-gauge flare with it.”

His first trips in 2012 were done on the cheap, utilizing an array of borrowed and secondhand gear, including a $15 jacket from the Salvation Army, a sub-$100 helmet several sizes too big (so he could fit multiple balaclavas underneath), a pair of old hunting boots, some borrowed snowmobile pants, and “the best sleeping bag $50 can buy.” Fortunately, his first year didn’t see temperatures go any lower than -35.

Thanks to the carbide studs in his tires — half-inch in back and three-eighths-inch up front — smooth sections of the ice roads can be traversed at speeds only limited by the degree of cold the rider is willing to tolerate. Wind chill can easily reach -75 degrees at highway speeds. The smallest piece of exposed skin is endangered. Solaro often uses duct tape to cover parts of his body and to seal sleeves and pants legs, an old trick used by 1970s snowmobile racers. He never uses heated gear.

“If something went wrong, you’d freeze,” Solaro says bluntly. “I own some and it’s great for cold-weather riding in the real world, just not when your life is dependent on it in extreme conditions.”

While he began his cold-weather adventures aboard that KLR650, he has since been loaned a CCM 450 in exchange for giving the boutique manufacturer feedback on real-world cold-weather performance. Aside from the loaner 450, Solaro doesn’t have any sponsorship or endorsement agreements.

“Some companies, like Klim, felt sorry for me and have given me gear,” he says, but Solaro self-funds his travels.

There have been days on the ice roads when he calculated that his average speed was 15 mph because he fell so many times. Those falls take their toll. He has two compressed vertebrae in his neck and a scar on his leg from where he had to sew up a gash himself with a fish hook (he posted photos on a Flickr album for those who aren’t squeamish). He has almost lost toes and has lost feeling in some fingers.

“I adore the sensation of pain in my hands and feet because it means they’re not frost-bitten, which has happened multiple times, and every time you get it somewhere, it becomes easier to get it in that same place next time,” Solaro says. “I acknowledge that if I keep this up at some point I’m probably going to lose some fingers and toes but that’s not going to stop me from doing this.”

When I first heard about Solaro’s exploits I envisioned a stern and tightly wound individual whom I assumed was ex-military, but I couldn’t have been further off. Oliver is wildly light-hearted, unapologetically self-deprecating. He wouldn’t admit it, but Solaro also happens to be one seriously tough dude, demonstrated by the number of times he’s gotten frostbite and opting to vacation in one of the world’s harshest environments.

I asked how he is received when he rides into some remote, indigenous town, a goofy-looking white guy who’s known to wear a kilt.

“Everywhere I’ve gone,” he responds quickly, “I have been met with sincere bright eyes, a firm handshake and open arms, and absolutely nothing but the best intentions. I’ve never had anything but good relationships with anyone I’ve ever met on these trips.“ Because these remote communities seldom have hotels, when Solaro can’t find a place to crash, he occasionally spends the night sleeping in RCMP jail cells, albeit voluntarily.

“I had a bit of a life-affirming moment a decade ago and I decided I wasn’t going to be chasing that lifestyle where I was trying to keep up with the Joneses, blah blah blah, and that what was most valuable to me is chasing experience,” he says. “I’m 51 years old and the window of getting to do this is getting smaller and smaller.”

One woman, one motorcycle, one year, one record Brett Smith

Broke down in the desert: How I survived the Sahara Nico Danan 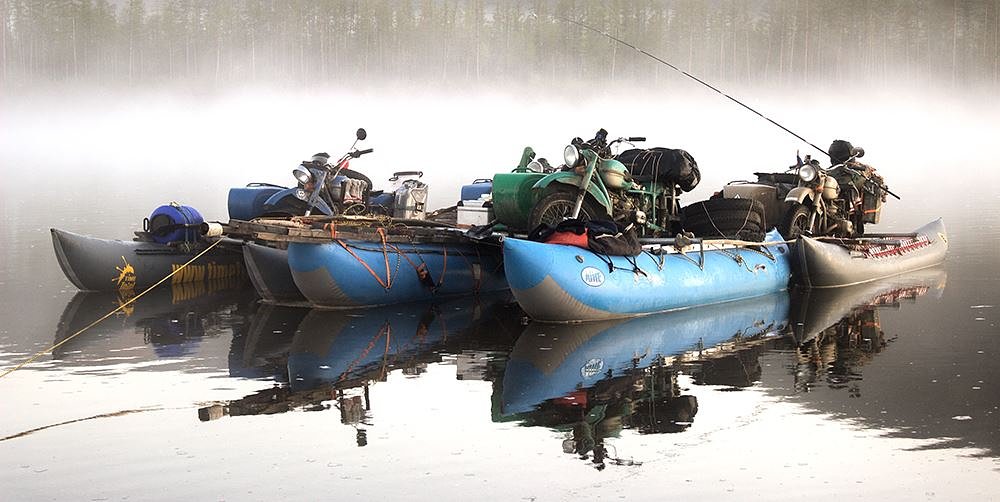 Abandoning normal: Five friends leave it all behind to traverse the globe on Urals Spurgeon Dunbar