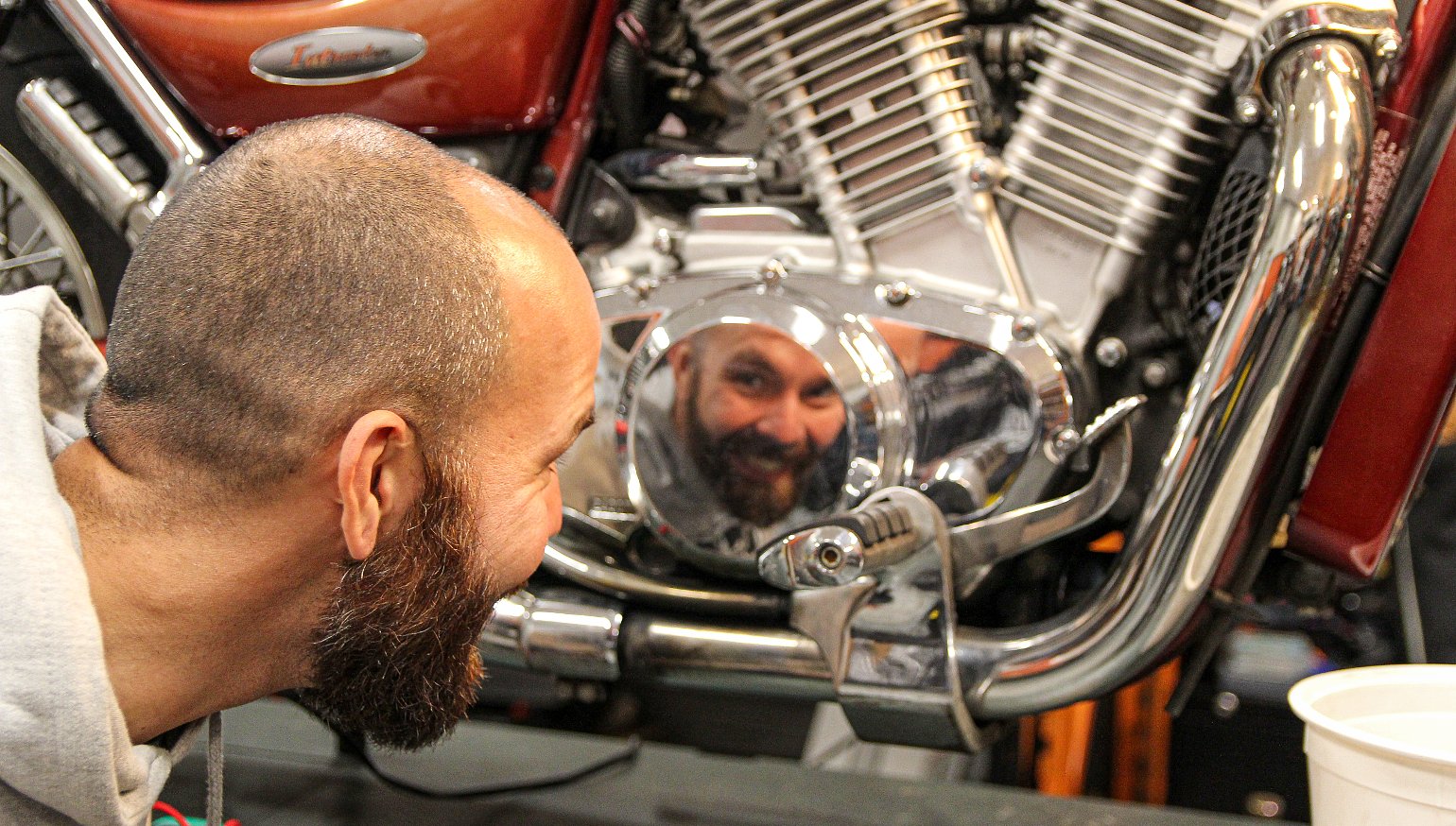 How to replace a motorcycle clutch

A slipping clutch is an issue some riders encounter if their bike is getting up there in mileage or has been ridden hard.

As an example, you can see and hear the issue we were having with this 1996 Suzuki Intruder 800 in our video “How To Restore a $1,000 Motorcycle - Ep. 2” at around the six-minute mark. As Lem mentions in the video, a slipping clutch is identified by twisting the throttle as if you were trying to pass another vehicle and noticing your engine’s rpms increasing without as much acceleration as normal. Since the clutch is the link between your crankshaft and your transmission, any slippage means that less of the power your engine is making is getting to the rear wheel.

Before you dive into a clutch repair, check the adjustment. If you have a cable-type clutch lever, be sure there is one-eighth to one-fourth of an inch of free play. This will ensure that the reason your clutch is slipping is not due to incorrect adjustment. Hydraulically actuated clutch levers typically do not slip when service is needed, but rather the opposite. If the hydraulic system needs to be bled, they do not allow the bike to shift into gear or you will tend to feel the bike lurch ahead when it is in gear and stopped with the lever pulled in.

Once you've determined that your problem really is due to a slipping clutch, replacing the clutch plates is something a home mechanic can do with a little guidance from a repair manual. All bikes are a little different in the details — for example, some clutches are on the left side and some are on the right side — but this Suzuki is fairly typical. Once you've determined a slipping clutch is your problem, here are the steps to follow to replace your motorcycle's clutch plates.

Start by sourcing everything you need to complete the job. I like to be sure my bikes are not torn apart longer than necessary.

For this job you will need an oil drain pan, repair manual, replacement clutch plates, new clutch springs, clutch cover gasket, motorcycle engine oil and some basic hand tools. A dial caliper is only needed if you intend to reuse any of the original clutch parts. If you are due for a new oil filter soon, now is a good time to change that, as well. Be sure that your bike is clean before disassembly. You do not want any dirt getting into the primary case.

Drain your engine oil and remove the oil filter if you are replacing it. Reinstall your oil drain plug and replace your filter like you would for a normal oil change, but do not refill the engine with new oil yet.

Start by removing any parts that are in the way of accessing all of the clutch cover bolts or items that would prohibit removal of the cover. Most covers use different length bolts to hold them on. I use a piece of scrap cardboard and sketch a picture of the cover on it with a marker. Then, I poke holes in it with a screwdriver to allow me to insert the clutch cover bolts in it as I remove them from the bike to keep track of which bolts go in which holes.

Using a bolt that is too long or short for a particular hole during reassembly could result in stripping the threads out of the engine case. If you accidentally lose track of where a cover bolt belongs, wait until you start getting the other bolts back in place and you will see how much the others stick out of the cover before they start to thread in. Usually this distance is about two to three times the diameter of the bolt.

Place a drain pan below the engine cover since some residual oil will drain out as soon as you knock the cover free from the gasket. Do not use a screwdriver to pry the cover off. This damages the soft aluminum of the engine case and will cause it to leak upon reinstallation. A light knock around the edge with a soft mallet or dead blow will do the trick. If it does not come loose, you likely missed removal of one last bolt.

As you pull off the cover, take note of any locating dowels. It is no big deal if they remain in the cover or the case, but it is critical that they go back where they belong when you reinstall the cover. Do not accidentally double them up or leave them out.

Remove the pressure plate bolts and clutch springs evenly in a criss-cross pattern or star pattern, depending on how many bolts and springs your bike has. Carefully remove the pressure plate and take note of how the clutch pushrod bearing is positioned if your bike has one. You may need a small pick to work the old plates out of the clutch basket, but more than likely they will just slide out together. Check for any excessive play in the clutch basket or metallic particles, which may be a sign of bigger problems than just worn friction plates.

Measuring the original friction plates and springs per the book is good practice, but we already have the new ones, so these old ones are going in the scrap pile either way. Be sure to count the old and new plates to ensure you have the same number. Our steel plates were within spec per the manual. You are mainly checking for warpage here due to excessive heat caused by slipping. If your clutch has been slipping for a while or you recently did a ton of drag racing or hill climbs, chances are that your steel plates need replacing, too.

A few of our steel plates were showing that they were very hot at some point, but not so bad that they became warped, so these will be reused. The manual does recommend replacing the steel plates, friction plates and springs all at once but we do have to be mindful of the budget on this bike. If you are reusing the steel (non-friction) plates like we did here, it is important to clean them thoroughly to ensure there is nothing on them that might make the new friction plates slip, such as someone using the wrong type of oil previously.

It is critical to check the condition of the clutch basket and hub. You can see ours is showing some wear but it looks worse than it actually is. If a bike has a jillion miles on it or it was ridden hard, these parts can end up feeling serrated like a steak knife from the clutch plate tabs hammering them so much. This can lead to the plates “hanging up” on the serrations and not ever releasing all the way. This causes a very sticky feel at the lever and will cause the bike to lurch and make it nearly impossible to get it into neutral when its running.

Be sure to reference the manual regarding any judder spring that may be in place in the very back of the clutch basket. These are aptly named because they prevent clutch judder or chatter. Some replacement plate kits require you to remove the spring, so be sure to check with the manufacturer of the replacement clutch plates to see if your judder spring remains in place or gets removed.

The replacement springs we are installing are 15 percent firmer than stock, which could result in a slightly heavier clutch lever feel, but will ensure the new clutch plates do not slip under hard use. If you prefer a lighter clutch feel, I recommend going with stock replacements.

Ensure any locating dowels are in place on the engine case side. If they are still in the cover and can easily be relocated to the engine case, they will help the new gasket remain in place while you reinstall the cover. Check to be sure both the engine case and clutch covers are clean and dry. Dry gaskets stay put when the cover is torqued down. Gaskets can sometimes slip out from between covers if they are installed on oily surfaces.

Since you used the “cardboard trick” when you removed the bolts, you know exactly where all the cover bolts belong now that it is time to reinstall them. Hand thread all of the bolts to get them started and then go back to snug them down properly in a staggered pattern. You want to torque down the cover evenly but be sure not to overtighten them. Too much torque on cover bolts will strip the threads out of the engine case. It is much better to have to go back and snug them up if the cover is weeping a little oil than to have to deal with a stripped engine case. If you do discover a stripped hole, there are a few options to repair them, but that is a “hole” other article.

Make sure you reinstalled the oil drain plug and oil filter as mentioned in step one. Refill the engine with the amount of oil listed in your repair manual and check for leaks. Confirm your oil level is correct via the sight glass in your cover if you have one. Go ahead and reinstall any parts that were in the way of removing and reinstalling the cover and be sure to check your rear brake if you removed the pedal. Once you confirm there are no leaks and all controls feel normal, it’s time for a test ride!

Double check that the rear brake is working properly before you take off if you had to move the pedal out of the way to complete this job. Our Intruder’s drum rear brake needed to be readjusted after reinstalling the pedal and peg. Go easy on the new clutch until it breaks in. You don’t want to push it too hard and overheat or glaze the new plates. After a tank of fuel, the clutch will be able to handle anything it normally would.

I really had a good time fixing up our old Suzuki. If your bike's clutch plates need attention, I hope this encourages you to take on the job on your own. You will really feel how much more power your engine can get to the rear wheel with the new clutch parts. Your bike will thank you by eagerly jumping off the line.