Garage follies. It could be the seized bolt that turns a half-hour job into an all-day ordeal, complete with multiple trips in search of new hardware, or the bought-the-wrong-part snafu that leaves you stuck in mid project with a half-assembled motorcycle taking up valuable garage space.

We've done those things, too. But we're here today to confess to those times when we did something that, in hindsight, made us feel really foolish. Perhaps you can relate. Come on. Be honest. We'll fess up first, and you can share yours in the comments.

The old Triumph Sprint was getting short on tread on the front tire, so one day right after work I decided to pull the wheel, as I have done dozens of times on the many motorcycles I’ve owned over the years. The Triumph has a center stand, so I usually just put a small board underneath it for extra clearance and I’m good to go.

The calipers come off first, and I secure them with bungee cords, so they won't dangle on the brake lines. See how I'm a careful home mechanic? I loosen the pinch bolts and remove the axle nut. Now, I should be able to just pull the wheel out, but the fender seems to be in the way. I think about removing the fender, trying to remember how I did this the last time. Then it hits me that the rear wheel may not be fully on the ground. A quick look confirms this, so I walk around to the back of the bike to push it down.

Are you getting the idea I’m not thinking this through?

Pushing down the rear definitely gives me the room I need, but whoa! The wheel comes completely loose and rolls out of the way. Now I’m stuck at the back of the bike, holding that end down with the front in mid air, and I'm trying to figure out what my next trick is.

I look around and find an old paint can within kicking distance, so I move it under the bike. Not enough. I look around for something else to put on top of it. I manage to find a board that gives me just enough room to let the front down without the whole bike crashing to the floor. Sometimes it pays to have a lot of junk lying around the garage.

Breathing a sigh of relief at avoiding that disaster, I notice that where I tied the calipers doesn’t look quite right. Uh, it looks like the turn signal stalks aren’t nearly strong enough to support a brake caliper. Both are drooping like wilted flowers. Removing the bungees, I discover both are broken.

Jeez, why didn’t I just grab a bottle of Scotch and slam a hammer on my thumb? At least that would’ve been fun.

Spurgeon Dunbar
Once worked at a motorcycle dealership, now does not; draw your own conclusions

As Henry Ford once said, "Failure is only the opportunity to begin again, only this time more wisely." If this is the case, then my life in the garage is nothing but one large opportunity.

My formal training was an apprenticeship at a small automotive shop in my hometown, where I worked putting myself through college. A lot of the oldtimers would teach me tricks of the trade to cut time while not cutting quality. One of these tricks was for removing gaskets.

Gasket removal is probably my number one pain-in-the-ass task in the garage. To speed the process along, one of the guys showed me how to affix a extremely fine-gauge 3M polishing pad to a pneumatic polishing wheel. Worked like a charm. I then got the bright idea to apply this same trick to removing a gasket from the oil pan of my Triumph Bonneville T-100.

This should have been a straightforward application of previous knowledge to a new task. Easy-Peezy. It would have been fine, had I not forgotten to replace the coarse sanding pad on the polishing wheel with a polishing pad. One severely gouged oil pan later, I went back to removing my gaskets the old fashioned way, with a razor blade, one scrape at a time.

While I have learned from my mistakes over the years, new “opportunities” to proceed more wisely still present themselves from time to time.

On a recent project, I spent three hours replacing the factory crash bars and radiator guard on my Triumph Tiger 800 XCx with aftermarket protection, including exhaust header guards. After getting everything installed and back in place, I noticed that one of the bolts holding the factory skid plate in place had backed itself out and had wedged itself into the top of the catalytic converter. The only way to remedy this was to remove the exhaust along with all of the work I had just tackled. Nothing like turning a three-hour job into six hours.

Lance Oliver
TeamZilla Managing Editor; has a way with words, less so with wrenches

Nobody ever mistook me for a skilled mechanic, but I like to think I have a logical mind and a basic understanding of how things work that add up to an ability to help identify a problem. Fixing it may be beyond my reach, but at least I can help pinpoint it, sometimes.

I was on an organized ride around Lake Superior several years ago and pulled into one of the stops to find a knot of my fellow riders huddled around an old BMW airhead, so I walked over to see what was happening. The bike was parked, stationary, engine off, but there was an odd buzzing sound emanating from, it seemed, the rear wheel.

The puzzled riders were coming up with explanations for the sound, all of which could be easily dismissed because the engine wasn't running and the bike was not moving. I was equally mystified at how a motionless motorcycle could be making noise, but grasping at straws, I asked the owner if he had seen any signs of brake fluid leaking. I thought maybe the sound could be brake fluid escaping somewhere because the brake had gotten hot, but I didn't even really believe my own theory, because I could see no sign of leakage and the owner reported that he had seen none.

In other words, we were all stumped.

Then the owner opened up his saddlebag and switched off his electric razor, which had turned itself on while bouncing around inside. Then we all felt like idiots. Relieved idiots, especially the owner of the airhead, but idiots just the same.

They say confession is good for the soul. Feel free to share your garage folly in the comments below. 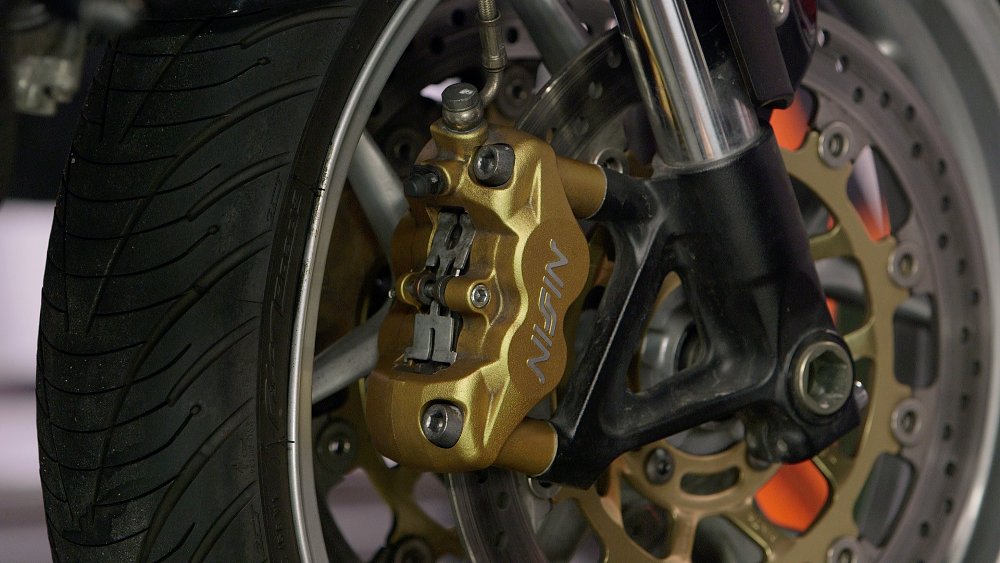 Video: How to change your brake pads Lemmy