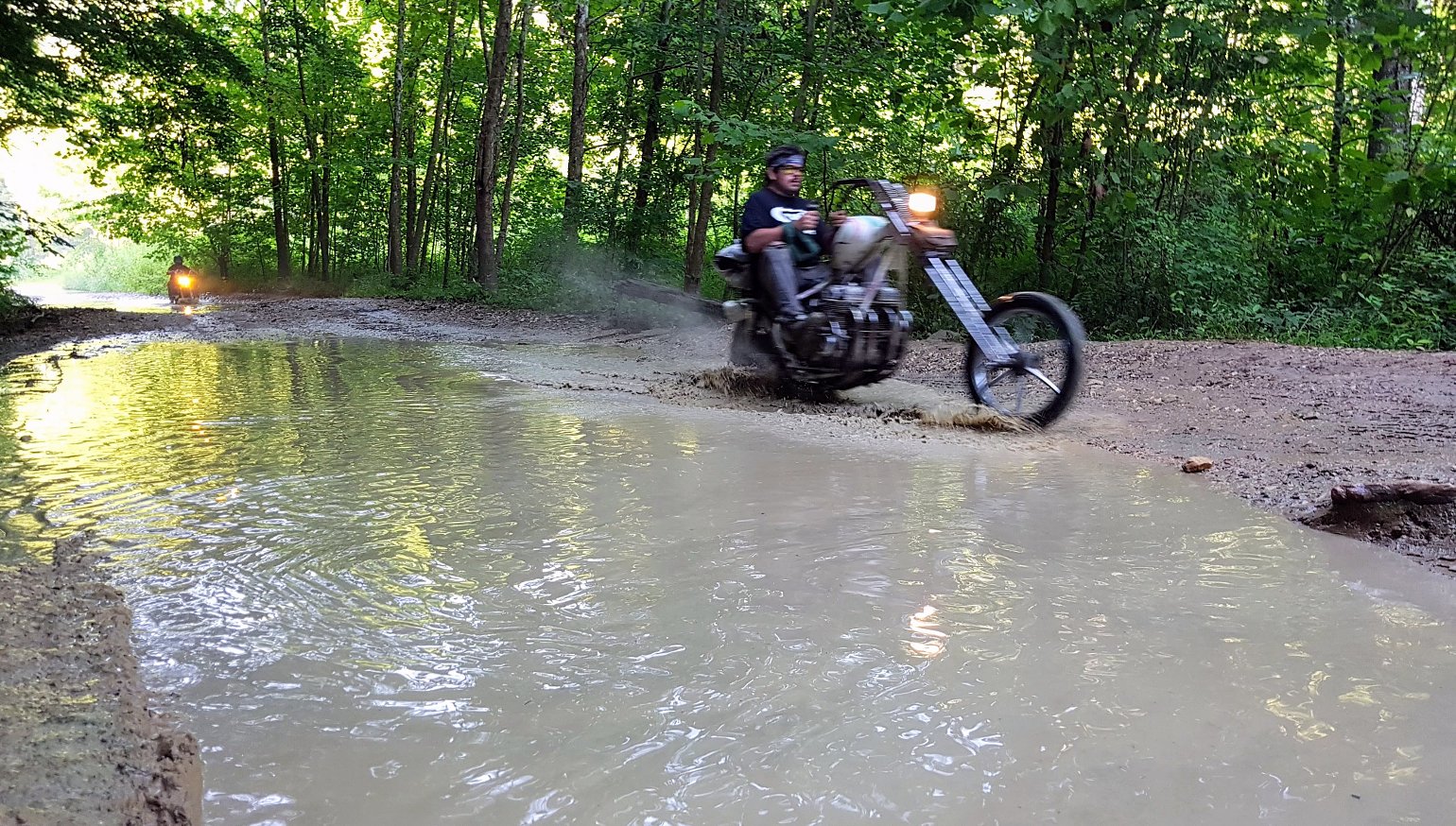 Does an adventure require a special motorcycle?

Griz came wheeling up in a cloud of dust, rattled off a tirade of swear words directed at me, the Africa Twin I was on, and my navigation unit.

Then he tore off down the road on his big, new-to-him dresser. Here’s what caused this outburst: The previous day, I’d been leading a pack and my GPS unit shot us down a detour of seven miles of Kentucky gravel to get to camp. At the end of our ride, Griz let me know he had no interest in a repeat performance, and I understood. My friend wanted to have a less adventurous adventure.

I agreed to do my best to make that happen, and we set out the next morning. Just a few miles in, I turned down another two-mile connector road that was paved...  which turned to gravel. (I didn’t know!) That was Griz’s breaking point. He screamed and yelled and roared off, pipes bellowing and tires chirping at each shift.

I’m happy to take nearly any bike into mud and gravel as far as I can. Hell, if given my druthers, I would have had more fun on the dresser, specifically because it’s more difficult. However, I’m also a bit unconventional in many senses. The situation is an interesting thought exercise, however. What is an adventure, and what kind of motorcycle do you need to have one? Thirty years ago, “adventure bikes” as we know them didn’t even exist. Surely adventures did. Have adventures changed?

I watched as Griz tore down the road, half of me laughing at him and half feeling really bad. Yes, I was on an adventure bike, an Africa Twin, but it was shod with street tires, fully loaded with camping gear for a week. Mrs. Lem was on the rear fender, so the weight was heavy and very high. I didn’t know the road was gravel, or I wouldn’t have taken our group down it; most of the people following me had no affinity for the stuff. Griz’s new Yamaha was in primo shape and he surely wanted to keep the paint free of stone chips. Ironically, the previous evening, just before Griz told me he didn’t want to see anything but macadam, we made our way down a slimy, muddy hill to get to camp, and I went over on the AT. Griz shot right down with no problems at all.

This little vignette (and this Africa Twin I’ve been slowly destroying) really do highlight an interesting question: Are you having an adventure if you haven’t gone far enough off-road? To answer this, I’ll fast-forward a little bit into this ride. I had split off and was riding with my good friend Okie, who was riding a chopped-up V-Star, with silly narrow handlebars, a rigid frame, and an 18/23 wheel combo. We were burning down the road. Okie’s stripped-down lanesplitter was a good top-speed contender for the fully loaded AT. We scooted right along until we stopped at the Ohio/Kentucky border and picked up Fearless Editor Lance astride his well-worn Speed Triple, which would have six-figure miles on the odometer, except for the fact the old-style clock only has five digits. Okie had no issues with the gravel, and I know Lance has turned a few miles on it before, too.

We scooted along doing just fine, on good pavement and bad, three riders on three bikes of different styles and ages, but all handling the varying terrain at hand. So did I need an adventure bike? Maybe not. Guys like Spurg test the limits of these heavy bikes off-road, but is there a point to owning one even if that’s not your riding style? I think I scratched the surface of that with my first impressions of the AT, but I can safely say now that I think “adventure” is all sales mystique.

Consider the marketing used to sell these bikes. Honda has this Africa Twin I can’t seem to stop riding. Guzzi offers a Stelvio, and Yamaha has a Ténéré. Those names are pretty aspirational. I’ve ridden all over America, but never straight across it, so maybe Harley-Davidson’s new Pan-America is more realistic (for me) than some of the other bikes, if we’re sorting by moniker. I get paid to ride motorcycles in many cases and many places, I ride a lot, and I still probably won’t ever ride in Africa. Surely the manufacturers know that. I’m comfortable with who I am and what I can do on a motorcycle. (Damn near anything but make money on one!) I don’t feel bad or silly when my adventures stay on the tarmac, and I don’t think others should, either.

Happily, there are some clues that tip off owners and intenders that Spurg-like off-road conquests are optional. The Africa Twin comes shod with Dunlop Trailmax tires, which are supposed to be 80/20 tires. That claim notwithstanding, these are tires that are at home on tarmac. I direct a lot of riders to the Michelin Pilot Road 4 Trail tire: It's specifically made for riders who have adventure wheel sizes (and presumably an adventure motorcycle!) but do not venture off-road. It's a perfect tire for those who can be realistic about what they do with their bikes, and it's also an acknowledgement that ADV motorcycles are great at a lot of things — but riders don't have to do all of them, despite what's shown in the promotional literature.

Is “adventure” synonymous with “gravel and dirt?” I don’t think so, and I think there are others who agree. I’ve ridden lots of that muck on street bikes, and I’ve taken my dirt bikes on macadam, too. (License plates encourage quick on-road detours!) But for many more miles, I’ve ridden pavement on ADV machines. They’re tall, comfy, have engines with wonderful manners and plenty of usable power, and usually act like touring machines with a very upright seating position and great visibility.

That Africa Twin carried lots of gear and two happy riders, and even though we went to some muddy places, chopper and sport bike pilots reached them, too. We saw a lot of the country on a comfortable bike, we ate new foods and met new people. (We also bumped into some old buddies accidentally, too, which was a lovely surprise!) We stopped to see interesting sights and came away with pictures, stories, and a noticeable feeling of satisfaction at the trip’s completion. Sounds like an adventure to me.

If you've got a motorcycle — any motorcycle — get out there and have yourself an adventure. There's no rule book. And while I wouldn't advocate for having the wrong tool for the job (unless you're into that sort of thing), remember that there was a time when all motorcycles were asked to be adventure machines.

The determining factor isn't your bike or your tires, you know. 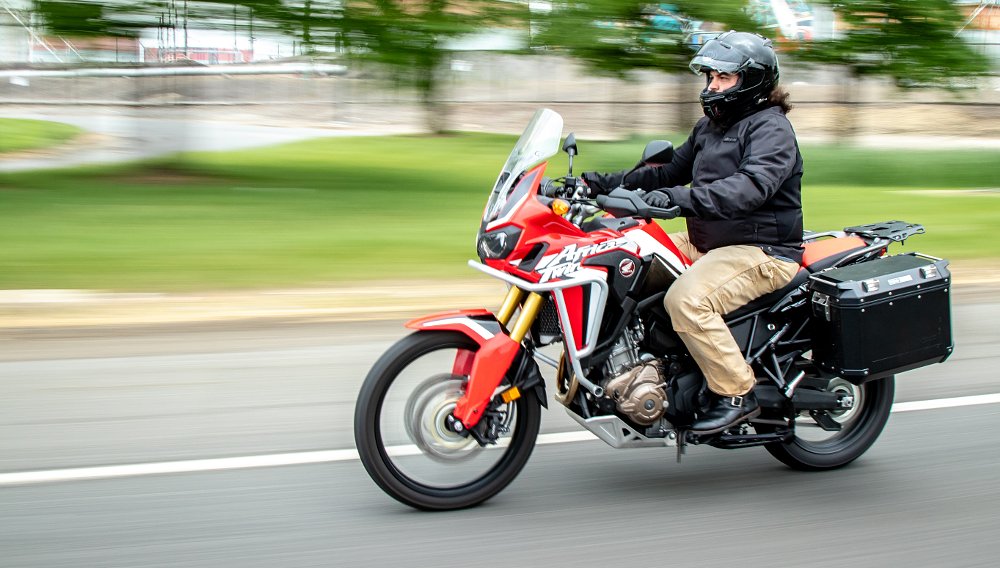 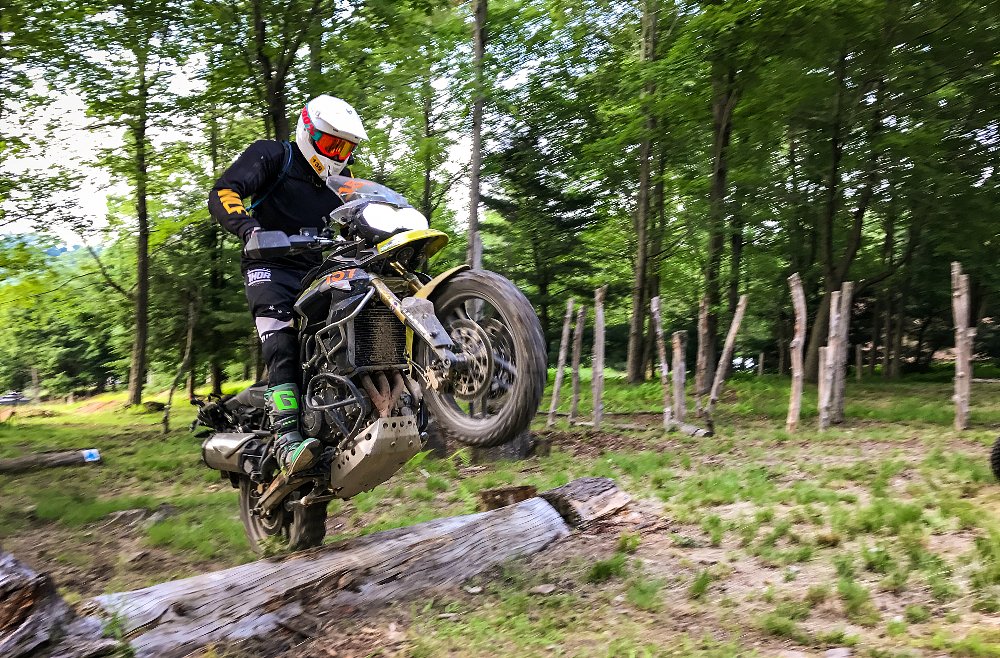