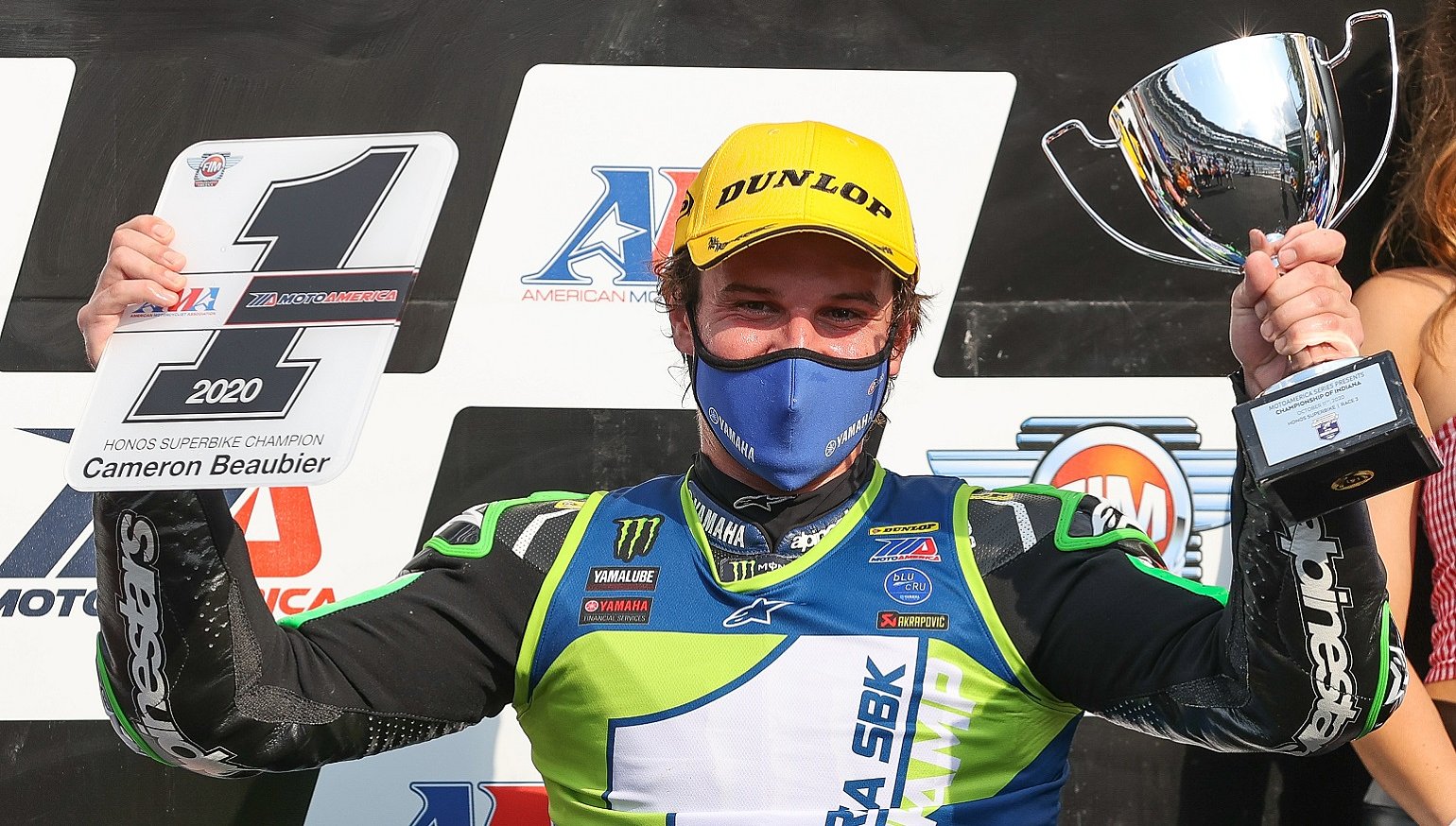 Superbike: Beaubier clinches after a weekend of plot twists

After winning all season long, Beaubier had a winless weekend at the Indianapolis Motor Speedway but still closed out his fifth Superbike championship. The first three-race weekend for the Superbike class was a tumultuous one for Beaubier, with multiple crashes, mechanical gremlins, red flags and tough competition, but at the end of the afternoon Sunday he left with a 97-point lead over his teammate, Jake Gagne, more than the 75 points needed with three races remaining at the final round at WeatherTech Raceway Laguna Seca in two weeks.

"Obviously, I'm over-the-moon happy but I'm relieved at the same time," said Beaubier, who had a weekend of racing unlike any other he's experienced this year.

"I just had pure fun this year," Beaubier said, who instantly gelled with his new Monster Energy Attack Yamaha team this season. "It was so fun just ripping off those wins and I was just really enjoying riding my bike all year. I've never felt so comfortable on a bike and just at home with my guys."

"It's been an amazing journey with Yamaha and it's definitely something that in the future I'll look back on and it may be the best moments of my life, who knows?"

The unexpected plot twists began in Saturday's Superbike race, which was stopped by two red flags, first when Kyle Wyman highsided on his Ducati at the end of the first lap. On the restart, Beaubier had a problem with his bike and missed the sighting lap, so he had to start from the back of the grid. He moved up all the way to sixth in the first lap. Back in the field, Trevor Daley crashed and his bike caught fire. That apparently put some fluid on the track, and the next time the field came around through turn eight, Suzuki M4 ECSTAR teammates Bobby Fong and Toni Elias nearly crashed out of first and second. Scholtz and Beaubier, in fourth and fifth, hit the fluid and crashed. It was a mild crash for Scholtz until Beaubier's Yamaha skidded into him, fracturing his ankle.

Scholtz spent Sunday in the hospital instead of at the track and his chances at the title — he was one point behind Gagne in the fight for second — were ended. It was the second time this year Scholtz was unluckily taken out of a race by a crash that was no fault of his own.

On the third start, Beaubier took the lead but crashed in the last corner leading onto the long front straight. That handed the lead to Fong, who held off a charging Gagne. By finishing second, Gagne gained 20 points on Beaubier, narrowing the lead to 83.

Sunday's first race was easily the best Superbike race of the season. The Attack Performance team had to totally rebuild Beaubier's YZF-R1 overnight and an electrical problem in the morning meant he went into the race with no practice time. By the final laps, it was a tight, four-bike pack at the front, with Warhorse HSBK Racing Ducati New York’s Lorenzo Zanetti (a Ducati World Superbike test rider on a new late-season Superbike entry in MotoAmerica) edging Fong by 0.196 seconds to take the win, with Beaubier finishing third and Gagne fourth. It was the first Ducati win in AMA Superbike since 2010 and the first race this season in which Beaubier didn't win or crash.

Sunday's second race also saw a red flag when Elias crashed out of the lead on the third lap, putting oil and gas on the track. Fong led on the restart as Beaubier made a mistake and fell back. But the championship was decided with four laps to go when Gagne crashed out of second. Beaubier finished second, just ahead of Zanetti and 9.831 seconds behind Fong.

"To be honest I felt like I lost a little confidence after three crashes this weekend and the little electrical gremlins we had," Beaubier said. "Sure, I could have gone faster, but I wanted to bring this thing home after crashing three times and having my guys stay up til midnight fixing my bike."

The championship puts Beaubier second on the all-time list of AMA Superbike championships, behind only Mat Mladin, who won seven. But the winless weekend means he can tie — but won't break — former teammate Josh Hayes' record of 16 wins in a season.

Rockstar Energy Husqvarna Factory Racing's Zach Osborne won his first 450-class title at age 31 this weekend at the final round of the Lucas Oil Pro Motocross Championship at Fox Raceway in Pala, California. Monster Energy Kawasaki's Adam Cianciarulo proved to be Osborne's biggest threat this year despite being a rookie in the 450 class. Cianciarulo set plenty of fastest laps and, at one point in the season, he reeled off a series of seven straight holeshots, showing a mastery of the all-important start in motocross. But he finished with two overall wins in the shortened, nine-race season, compared to Osborne's four overall wins. Osborne was consistent, too, finishing outside the top five in only three of the 18 motos.

At the final round, Osborne cruised to a 5-7 finish in the two motos, which was good for sixth overall and plenty to take the championship ahead of Cianciarulo, who finished 2-3, by 12 points.

“I considered actually retiring in March after I broke my back and my wife gave me a pep talk and we decided against it, went to Salt Lake (for the conclusion of the interrupted Supercross season) and that went well and it just carried into this outdoor season," Osborne said. "I came out swinging and was able to take home a national championship, which is something I never ever dreamed of doing. I felt it was way out of my league. So dream big is the moral of the story and don’t ever give up. Find people that believe in you even when you don’t and keep pressing on."

In the 250 class, Monster Energy Yamaha Racing's Dylan Ferrandis finished 2-5 at Fox Raceway to finish third overall and close out the season 13 points ahead of GEICO Honda's Jeremy Martin. Ferrandis had some moments at the last round, as seen in the highlights video below, but kept the wheels in line and won the title.

The outdoor motocross season certainly didn't look like any other season anyone can remember, but then what about 2020 has been typical or familiar? Despite the late and frantic end to the Monster Energy AMA Supercross Championship, series organizers MX Sports pulled off a nine-round season, starting with the two rounds at the Loretta Lynn Ranch in Tennessee, hardly a typical track for the pros but a homecoming for virtually all of them, who got their start racing at the amateur championships in the August humidity of Loretta's over the past years.

With one round remaining at Laguna Seca, all the MotoAmerica championships have now been decided.

The Supersport class has provided some of the best battles this season, even though most races ended with HONOS Racing's Richie Escalante pulling away for a solid win. Like Osborne in motocross, Escalante almost walked away from racing, taking a year off in 2017. But instead, he came back.

Going into Indy, only M4 ECSTAR Suzuki's Sean Dylan Kelly had a chance to catch Escalante and he was on the pole. On the start of Saturday's race, Escalante got swallowed up while Kelly pulled away. But any worries Escalante had about losing points ended on the second lap when Kelly crashed while leading. From there, Escalante cruised to a 15-second win. Sunday's race whittled down to a two-man battle between Escalante and Kelly with Escalante winning by 1.198 seconds for his 13th win in 16 races and closing the deal with an insurmountable 70-point lead with two races remaining.

"It has been five years working hard to win a championship," said Escalante, the son of a racer who comes from Tizayuca in the state of Hidalgo, Mexico. "This was my father's vision, my brother's vision, and both have supported me so much."

The sideshow to the Supersport class this year has been some complaining, mainly from the M4 ECSTAR team, that Escalante has an unfair advantage because his Kawasaki ZX-6R has a 37 cc displacement advantage over the 599 cc Suzuki GSX-R600 and Yamaha YZF-R6. The complaints are always prefaced by "not taking anything away from Richie," but by definition those arguments do take away some of the credit.

What's the reality? Escalante has been a threat in the class in recent years but he made a huge step forward in 2020 and there are multiple reasons. Yes, he has the "636," but perhaps just as important is that Escalante's bike was built by Chuck Graves' operation, the one that ran the Yamaha Superbike team for many successful years. It has to be noted that others have raced the ZX-6R in past seasons without success.

Maybe the most important ingredient in Escalante's success is the team put together by Humberto Baca with sponsorship from HONOS out of Mexico.

"I feel at home with the team," Escalante said. "When I begin each weekend I feel confident, so the most important thing for me is to continue with this team. I would like to move up to Superbike with a competitive bike but the budget is very high. If we can't, we will defend the (Supersport) championship for one more year and maybe in 2022 we can move up. I think that's realistic."

Privateer racer Stefano Mesa, who usually competes in the Stock 1000 class, stepped into the Supersport class this weekend and finished second and third. Mesa is scheduled for surgery later this year to donate a kidney to his father, who has been his main supporter in his racing career. Sunday's Supersport race was also the first MotoAmerica podium with all three riders doing post-race comments in Spanish, as well as English.

In the Stock 1000 class, Altus Motorsports' Cameron Petersen won his seventh straight victory to wrap up the title in the class on his Suzuki GSX-R1000. The South African rider was pressed throughout the race by Travis Wyman on his BMW S 1000 RR, who led briefly and finished second just 0.307 seconds back, his best finish of the season. Max Gerardo of Argentina finished third, his first MotoAmerica podium, making it another very international race result.

"It means so much to me. This is my life," Petersen said. "Obviously my goal is to be a Superbike champ and hopefully one day get in the world championship but just being able to hold this AMA number-one board is pretty special. It's something I dreamed of my whole life. It hasn't been easy."

Rocco Landers, who had already clinched his second Liqui Moly Junior Cup title, also wrapped up the Twins Cup title this weekend with his seventh straight win. That leaves Landers free to go back to Europe to compete in the Red Bull Rookies Cup and skip the final MotoAmerica round at Laguna Seca without ceding any championships.

His father, Stoney Landers, said the family is still in the process of getting all the required tests and paperwork done to be able to travel but they plan to leave this week for Europe for the next five weeks, where the 15-year-old three-time MotoAmerica champion will try to take advantage of his opportunity in the Rookies Cup. 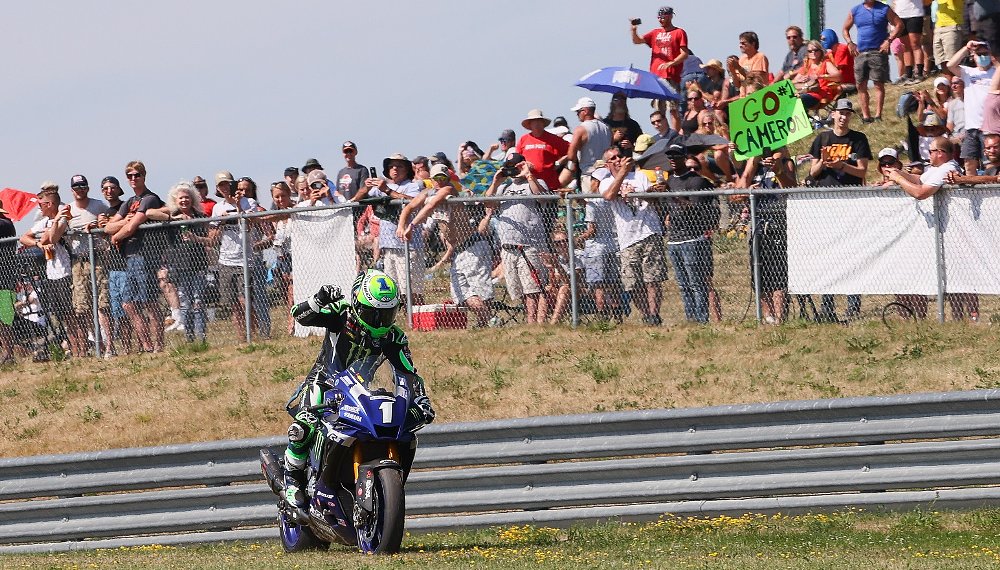