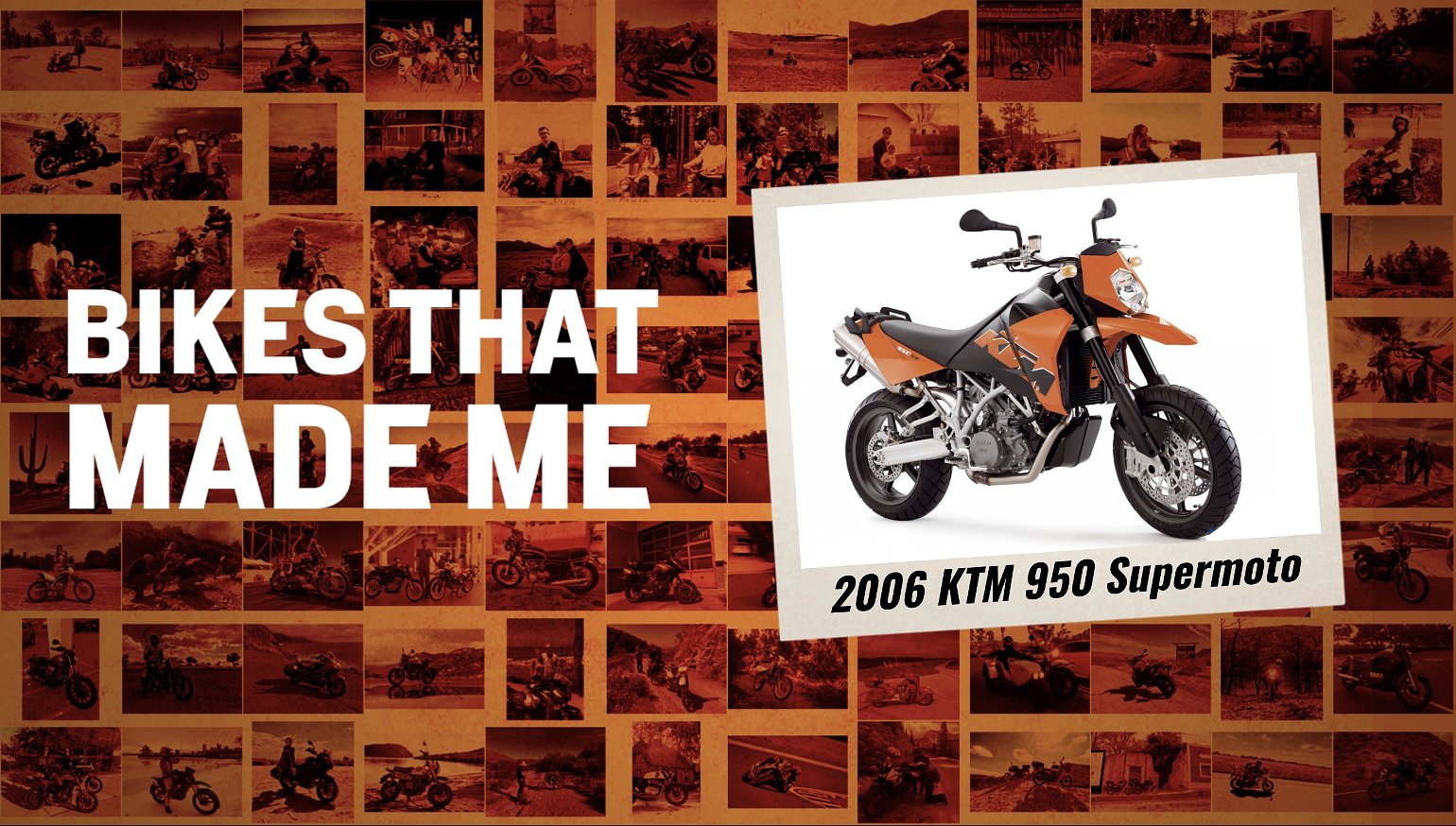 Bikes that made me: How a 2006 KTM 950 SM opened a new chapter of motorcycling

When I was a kid, all I dreamed about was roadracing, whether I was awake or asleep.

I grew up on a solar-powered farm in the middle of Vermont, miles from pavement. I always had a dirt bike of some kind around and I was delivered an amazing amount of fun, but we always want what we can’t have. And what I wanted was asphalt.

Eventually I got my license to ride on the street, but more importantly I raced — just like my heroes, except quite a bit slower — from age 15 to 24. On good days, I was above average on the track, but I was never destined for greatness. Still, it was basically all I cared about. Friends’ birthday parties, my college soccer games, even my cousin’s wedding, they were all skipped because I had a race on the same weekend and it was important to me. When I pushed a shopping cart in a grocery store I would reach my fingers forward to the first bar ahead of the handle and silently work through shifting and braking patterns at different tracks. It was all I wished I was doing.

In late 2008, the winds of life blew me to California with a few bags of clothes, my mountain bike, and a scooter I had bought after college as a city runabout and pit bike. After a few months wheezing up San Francisco’s hills on a 49 cc scooter, I bought my first real motorcycle. My first real vehicle, actually, predating my first car by about five years. Despite shopping specifically for a Ducati Monster S2R, I ended up with a couple-year-old KTM 950 Supermoto — a thunderous, 942 cc carbureted V-twin with Akrapovič slip-ons and a sky-high seat. The previous owners had put 2,200 miles on the odometer and what seemed like literally every possible piece of carbon fiber and orange-anodized aluminum available in the Powerparts catalog.

My dad said it looked like an insect that might try to eat its mate so I ought to be careful. As far as I was concerned, we were best friends. There were 98 claimed horsepower on tap when it was new, so the 950 SM has never been a rocket ship but the torque was (and is) intoxicating. It’s rowdy and agile and it sounds terrific.

Living in a new city with no maps on my phone yet it became my simple mission to ride, and no journey was too large or small. The inconvenience of a 35-inch seat height and getting gas every 130 miles or so didn’t stop me from riding everywhere — to the grocery store, to my rec-league soccer games, and to the beach to hang out with friends. I picked up take out and went on dates. Never having been a big drinker, I found in my new companion the perfect excuse: “Nah, none for me thanks, I’ve got to ride home.”

And I commuted on it, but it was much more than just going to and from work. It was the best part of my day, every day. I felt a rush of excitement knowing that when I left work I didn’t have to catch the 5:17 or the 5:26 bus across town. I could leave when the time was right and I could go wherever I wanted. There was no route. I rode north and basked in the glory of the Golden Gate Bridge, or through Chinatown, or up Twin Peaks and back down, just because I could. One day, stuck at a light on Geary Street, I felt eyes on me and slowly turned to see someone staring at me through a city bus window. It was my friend, smiling awkwardly and waving. He probably thought I looked ridiculous, and to him maybe I did, but I was high on the freedom of the thing. Like many a young idiot before me, I took the restrictor plug out of the end of the exhausts and occasionally set off car alarms. It’s shameful now, but man, that sound. I couldn’t get enough.

Soon enough my radius expanded. I rode to see friends and family that would have been out of reach on a scooter, and half-a-day away on public transit. I would get up early on Saturday and ride the roads north of San Francisco into Marin County or south along Skyline Boulevard. Partly it was because racing wasn’t in the cards — I didn’t have the money or the wherewithal to make it happen — and so riding on the street became my pastime. I carved casually through corners and blasted along hillsides with the echo of Austrian thunder in my wake. I dreamed of MotoGP as I rode, just like always, but I also stopped and took pictures. I contented myself with a tasty sandwich at a quiet picnic table, the sun on my face and the bike clicking as it cooled.

And oh, the wheelies. I’m not sure how many more miles the back wheel has logged than the front, but it’s more than I care to admit. I’ve always loved wheelies and this bike is proof that someone upstairs wants me to be happy. If you imagine a montage from a Disney movie of a little kid becoming best friends with his motorcycle — exploring together, fueling up at a gas station, laughing and revving down a twisty road — that was me and my new KaTooM. It sounds kind of stupid and obvious now, but my focus on the glory of racing had been clear for so long that I almost didn’t consider enjoying motorcycles the way so many other people do.

It reminds me of an interview with the famous MotoGP physician Dr. Claudio Costa, who used a beautiful analogy to describe Wayne Rainey’s career-ending injury and life afterward. It goes something like this: Rainey’s racing life was a candle he was using to see the world, and when it was snuffed out he was lost in the darkness until his eyes adjusted and he realized how much more there was around him when he wasn’t using only the candle to see. I know it’s dramatic to compare Rainey’s injury to my discovery of street riding, but the notion is similar. I thought racing was what I needed to enjoy motorcycles, but when I couldn’t do that anymore I found a new way to feel fulfilled within the pastime I love.

This KTM taught me a bit about myself, and it also shaped me into a more complete motorcyclist. It turned me into the type of person who rides everywhere, through some combination of loving it and having no other choice. I can only assume using the bike all the time changed the way people saw me, too. Maybe there are some dates I would have gone on if it weren’t for the enormous and loud traffic-cone transformer I used to get places. Riding a motorcycle defined me more than ever, for better or worse, and I like to think mostly better. My love for this 950 SM might even be one of the reasons I ended up getting hired to write about motorbikes at all. When I reconnected with my childhood friend Ari Henning and he asked if I wanted to join for part of a road trip he was taking for Motorcyclist magazine, I said "Hell yes!" and fired up this bike.

In some ways, my relationship with motorcycles is the same as ever. I still sometimes pretend that the shopping-cart handlebar has a throttle, and if the traction is right I can get a pretty sweet drift going. No big deal. I also still have my KTM and I still love it. A lot of it is sentimental, I know, because it doesn’t make much sense for me to own anymore. I live in Los Angeles, which means if I want to go anywhere I have to get on a freeway, and the 950 SM isn’t especially comfortable for that kind of travel. It’s just worth more to me than it is to anyone else. Even as spoiled as I am getting to ride new models every week, a spin on my motorcycle always makes me smile. It’s modern enough to have good stuff like explosive acceleration and sharp brakes, and yet it’s raw and pure in a way that a lot of new bikes can’t match.

Come to think of it, my dreams are largely the same as when I was a kid, too. Especially those moments at the edge of consciousness, where a shallow sleep washes over me and the bud of a dream shakes me awake. It’s a common thing. These little visions we have are often of falling, which is what jolts the psyche from sleep. When I started riding a motorcycle my version of that dream consistently became tucking the front into a lowside crash on some racetrack or another, and it’s never gone away. The difference now, ever since May of 2009, is that instead of waking up to a mountain bike and a poster of Mick Doohan on my wall I have my favorite wheelie partner waiting to go on a ride. 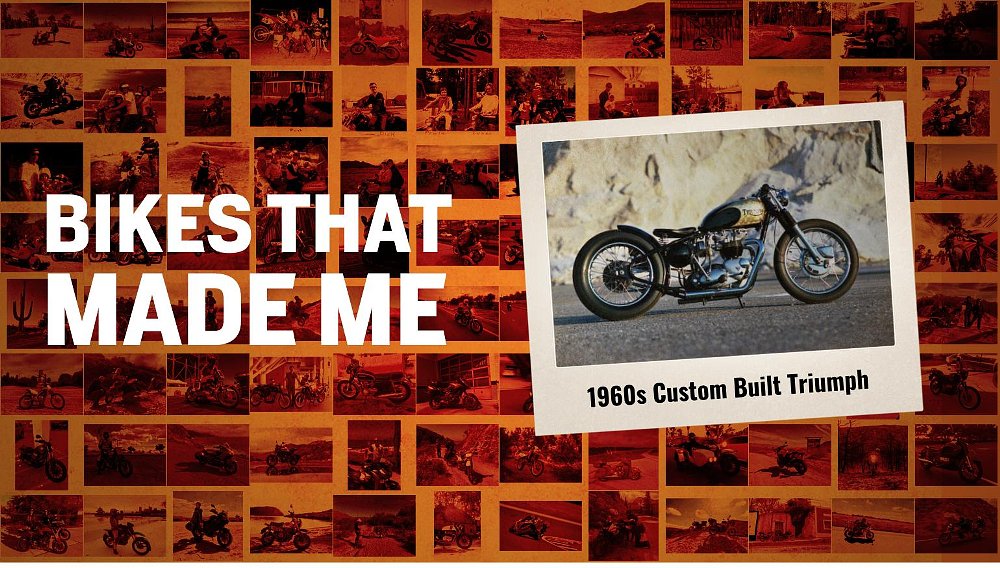 Bikes that made me: Zito's custom vintage Triumph Joe Zito 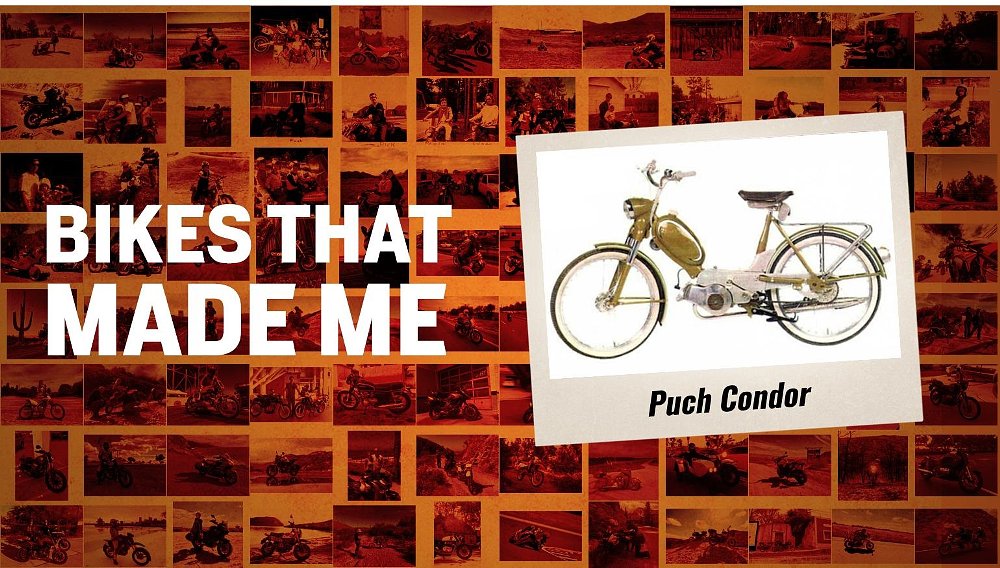 Bikes that made me: A Puch Condor moped in Switzerland Mark Gardiner 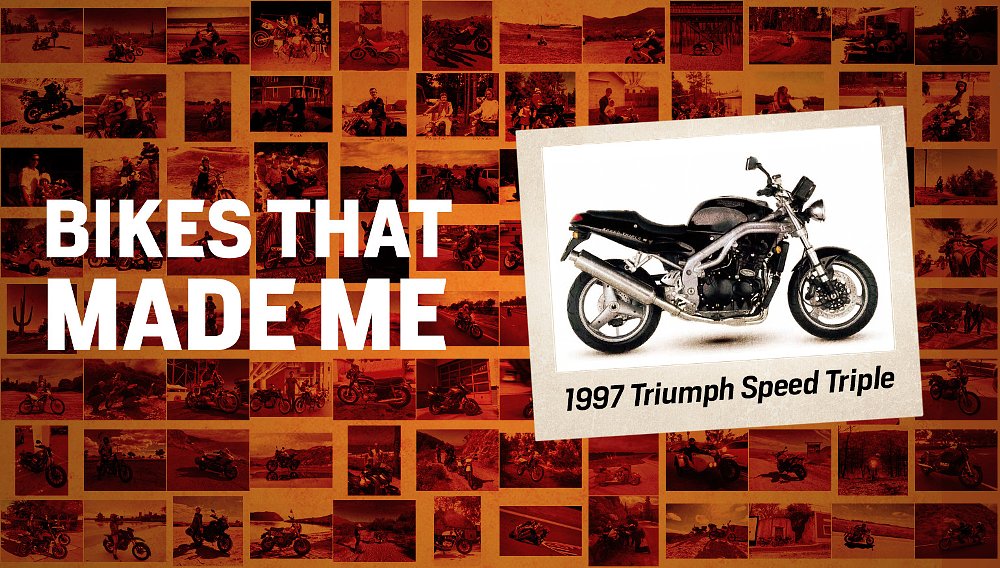 Bikes that made me: A Triumph Speed Triple shifted my motorcycling into a higher gear Lance Oliver 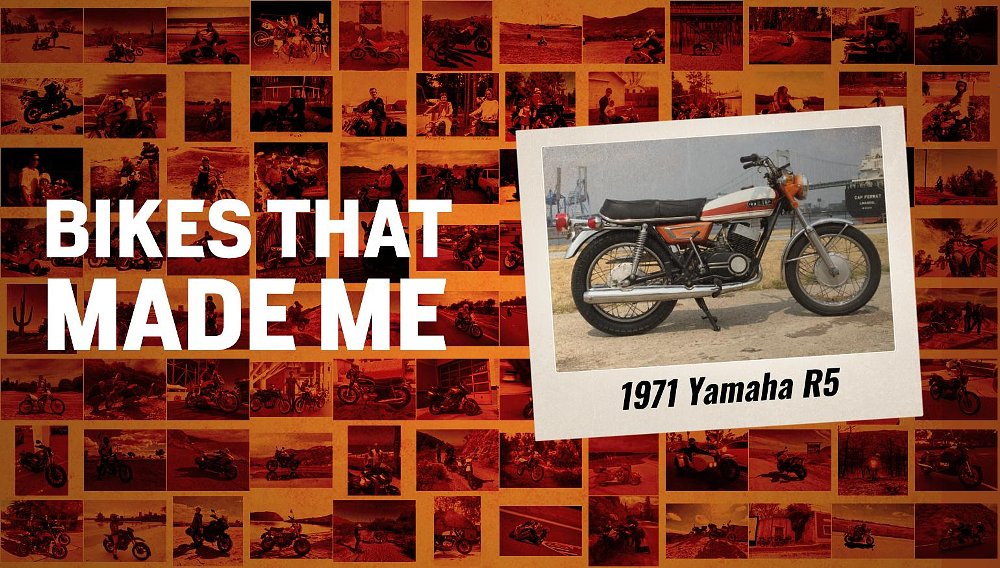 Bikes that made me: The unexpected fun of a 1971 Yamaha R5 Joe Zito 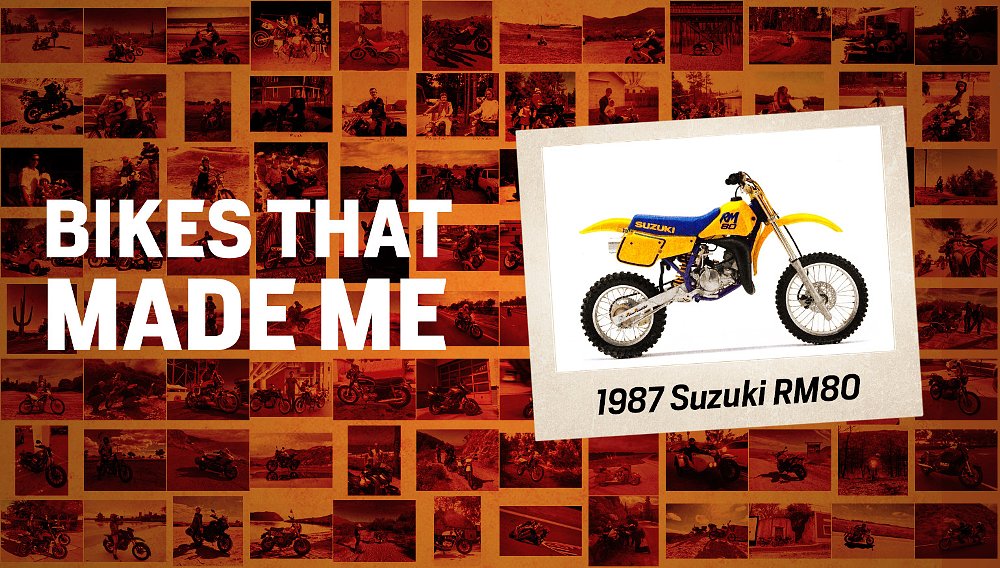 Bikes that made me: How a Suzuki RM80 taught me to respect the machine Zack Courts 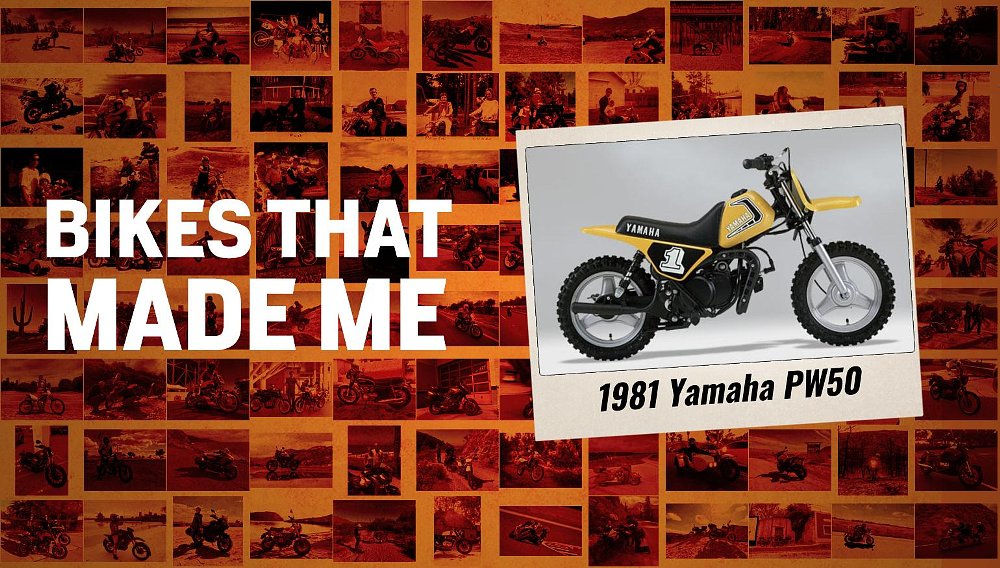 Bikes that made me: The PW50 my father bought on impulse Brett Smith 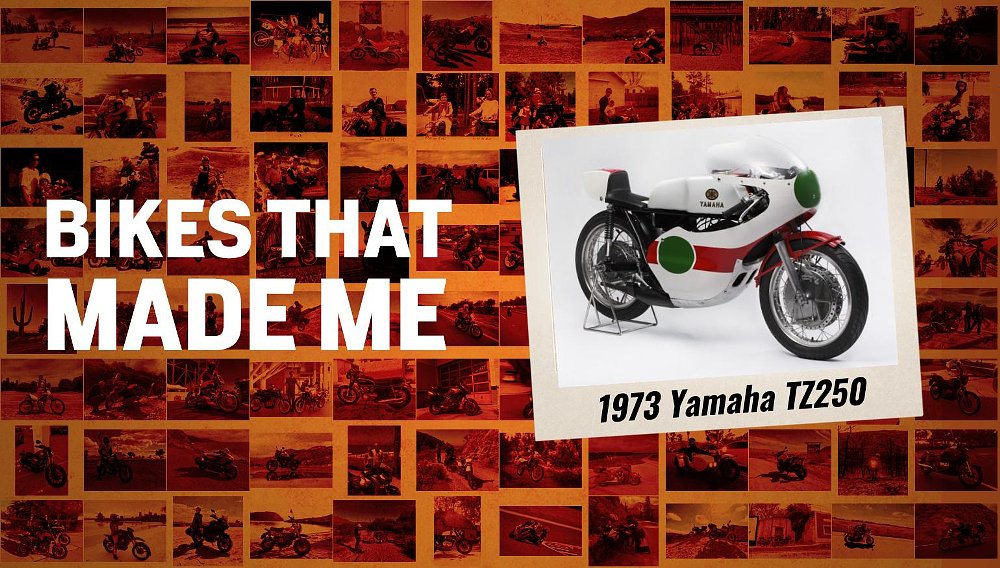 Bikes that made me: A Yamaha TZ250A race bike got a sheltered kid out in the world among giants Jerry Smith