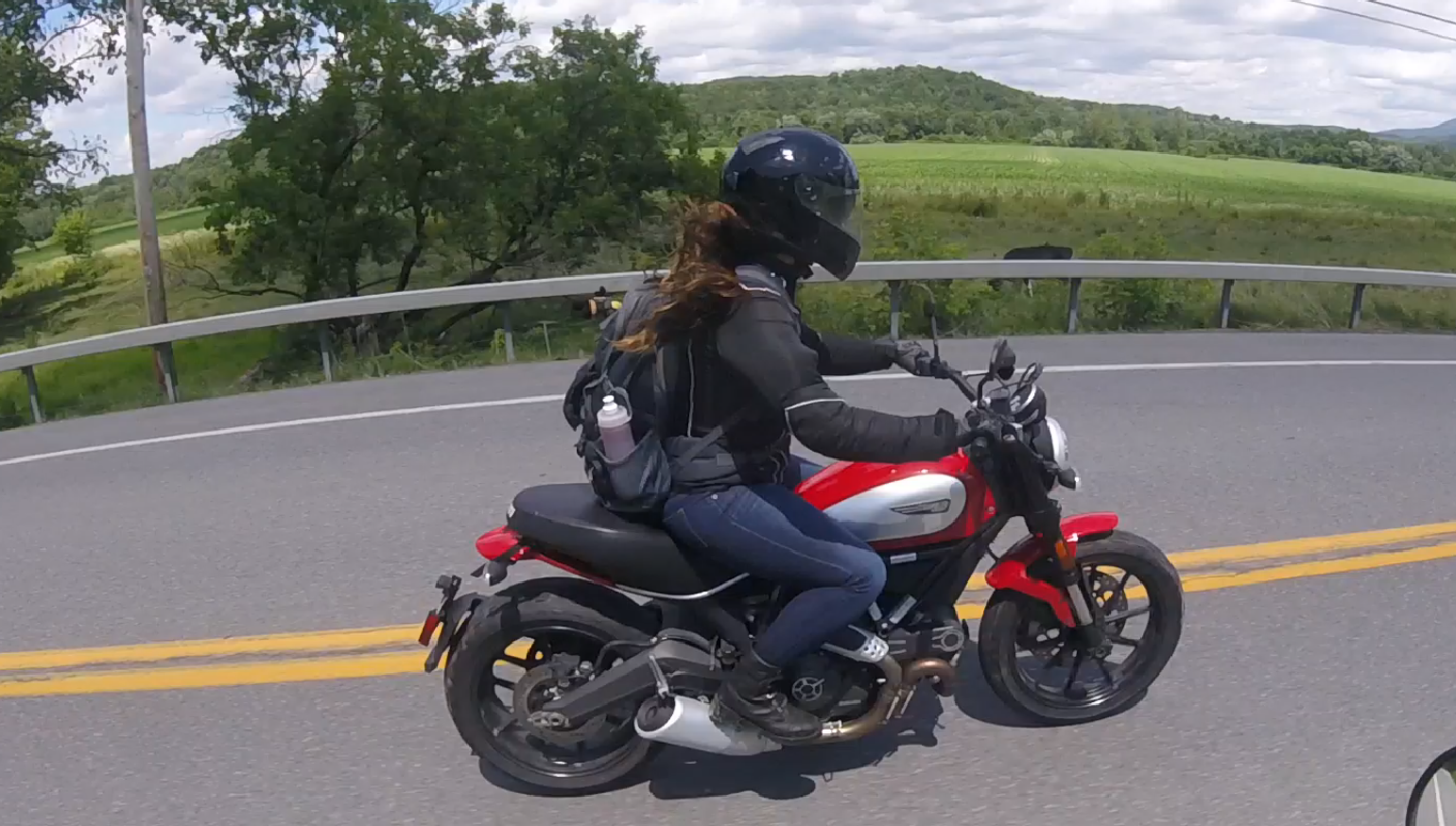 Women riders in their own words

Even as the popularity of motorcycling has waned among the general population in recent years, more women have taken control of the handlebar. Not content to ride pillion, they want to see more than the back of their partner’s head while on two wheels.

To get an idea of why, what and how women ride, I asked some questions of several women riders. The subjects of my very unscientific research range in age from 22 to 53, one in each decade of life. One of them has been riding 17 years, but the others only took up motorcycling in the last two years. Some of their answers were what I expected, and some weren’t — starting with why they began riding.

What motivated these women to start riding?

For an industry looking to attract new riders, this is the most important question. What moves someone (especially women, who are a small minority among motorcyclists and have fewer role models) to take the step and start riding? The answers I got were mostly similar. The three women who recently started riding all began as a passenger and moved up because of the feeling of accomplishment and the fun of the challenge.

“I've always been a passenger,” said Melinda, age 47, who rides a Harley-Davidson Street 750. “When I would ask friends about going for a ride, it was never long enough for me. So, I decided it was time to be in control.”

Sue, age 53, who just began riding this year, also got tired of relying on others to go for a ride. “I wanted a challenge,” she said. “I felt that if I could tackle something so terrifying then I could do anything! Very empowering!”

Amber, the youngest of the four riders at 22, also got tired of relying on her boyfriend to go for a ride, so she bought a Scrambler Icon from Ducati. Like Sue, she found the experience empowering.

If the first step for the motorcycle industry is to understand what motivates women to become riders, then the second step, at least for the manufacturers, is to figure out what they want to buy. Some of the women made choices you would expect, but not always. That’s especially true when they talk about their next bike.

While the others are relatively new riders, Robin, age 36, grew up around motorcycles and has been riding for 17 years. For her, it was never a question of whether or not she would ride. Robin’s first motorcycle was a Harley-Davidson 883 Sportster, which may come as no great surprise, but where she’s gone from there may not be what you predicted. Robin moved up to a 1997 Harley-Davidson Dyna Super Glide. If you’re surprised she’s riding a 20-year-old motorcycle, consider that Robin said she likes “old stuff.” Her dream bike is a Harley-Davidson Panhead and she would love to have a Sokół, a motorcycle made in Poland prior to World War II. Oh, and by the way, Robin also owns a rigid chopper.

The three newer riders, like many women, chose a first motorcycle in part based on seat height.

At five feet, two inches tall, Sue chose a Honda Shadow 750 for its low seat height and affordability, but she doesn’t plan to stop there.

“I'm already dreaming of traveling and will need something little bigger with more storage,” Sue said. She’s looking at BMWs, but seat height could prove problematic.

Seat height was also a factor in Melinda choosing the Street 750 as her first ride. Though she is also five feet, two inches tall, she still plans to move up to a Harley-Davidson Heritage Softail for her next motorcycle, despite its 750-pound heft.

Amber, the youngest rider, has a riding style that’s a bit on the, shall we say, aggressive side. Thus, she wanted a lightweight motorcycle with good power. She also loved the classic looks of the Scrambler, yet values modern features such as fuel injection, ABS and a USB socket.

“Eventually, I’d really just like a bigger bike,” she said. “Starting out on an 800 means I’m not going to outgrow this bike, probably ever, but I will always want to go faster. I think if I ever get to do track days or live somewhere with more open roads, I’ll really be wanting a bigger bike, but for now I’m more than content with my Scrambler.”

Among the models catching her eye are the Ducati Monster 1200R and the BMW R nineT.

At just over 31 inches, Amber’s Scrambler has the tallest seat height of the motorcycles owned by these four riders. That’s lower than the average touring or adventure bike, but it is still at the upper limit for many women. Choices are limited for shorter riders who want a lower seat height but don’t want the limited range and less sporty ride that comes with cruisers.

I can’t help but imagine a Suzuki V-Strom with a 28-inch seat height or an SV650 set up as a tourer with provisions for panniers. Kawasaki might be onto something with its Ergo-Fit system on the Vulcan S. Why can’t this be a feature on other future models? Low-height motorcycles that are not cruisers could be successful, particularly if female ridership continues to climb. Are you listening motorcycle manufacturers?

Not a new problem: women’s gear

It’s a topic RevZilla has addressed before. Women have a harder time than men finding quality gear that fits right.

“The selection is small and not even comparable to the men’s in quality,” said Amber, who takes an ATGATT (all the gear, all the time) approach to riding.

“I always wear a pair of Kevlar-lined leggings under my pants, gloves, waterproof leather boots, a textile jacket, and helmet, even in the 90-degree weather,” she said.

Color choices beyond black or pink would be nice, too.

“We’re not all stereotypical biker babes that like black and women come in all shapes and sizes,” said Sue. “I'm kind of tired of looking at skulls and such.”

Conclusion: The industry can do better

Though I only spoke to a small sample of women for this article, I believe women motorcyclists are both underserved and misunderstood by the industry. Contrary to the comments I observe on many motorcycle message boards, there is a common thread of do-it-yourself spirit among younger women riders.

“I want to learn the ins and outs of a bike,” said Shelby, a friend of Amber’s. “Having a newer bike I could rely on has been great, but if my bike breaks I want to know how to fix it. I’ve met a few girls who have these skills and they’re the ones who really inspire me.”

Since I already knew all of these women, except for Robin, not much of what they told me about why and how they ride came as a surprise. What did surprise me was how passionate and knowledgeable they are.

Could it be that motorcycle and gear manufacturers are misunderstanding a knowledgeable, lucrative and growing constituency among motorcyclists? It would appear that way to me. I believe there is an incorrect stereotype that the female motorcyclist is demure and seeks a tame, pretty motorcycle with which to follow her man. It has been my experience that this was never true and has become less so.

A Mothers Day story: I am my mother's daughter Teri Conrad