Where did all the two-strokes go?

That’s what I hear any time I head out with friends on a trail. Admittedly, this is anecdotal, but most folks I ride off-road with are my age, none of us have money to burn, and we’re generally a little fat and a little over the hill. And everyone’s on an orange bike, save the odd blue one here and there. All you can smell is Klotz and Dominator burning.

Here, see for yourself.

We're a bit anomalous, though, given what bikes are on the market now. Oh, two-strokes haven't died totally in the trail segment, but in the highly visible MX world, they're all but dead. And even on the trail, they're not represented as well as they could be. But why is that? Let's step back in moto history for just a moment.

Street two-strokes vanished many years ago. While meeting stricter emissions standards could have been possible, manufacturers played it safe and developed four-stroke designs. Less frequent maintenance had a lot to do with that. Who wants to replace plugs every thousand miles on a multi-cylinder machine? How many riders truly will put up with the hassle of repacking a dirty, oily-ass muffler?

Nobody was sure what the EPA might have up its sleeve. The auto industry then, like today, had already invested way more dollars into emissions technology than the motorcycle industry, and that knowledge and componentry could be bought for a lower cost than sinking R&D money into two-strokes. Four-strokes were a safer bet all around.

And so it went, with off-road machines mostly escaping unscathed due to the fact that, well, they are used off-road. The EPA wasn’t interested in those items as emissions violators… at first. As laws changed, though, even dirt bikes came under fire. Wouldn’t it stand to reason that four-strokes were the way forward in the off-road arena, as well? Cars had gone that way, and dirt bikes’ street-going brethren did, too.

And why not? Four-strokes go longer between services and, in the non-racing world, the weight penalty is largely offset by the much gentler power delivery. However, four-strokes were not outselling their two-stroke rivals. Comparatively, the four-stroke machines were heavier, more expensive to produce and to buy, and more complicated to work on. Increased cost and complexity coupled with weight and performance loss have never been a good way to sell motorcycles, and this scenario was not an exception to that rule.

The governing racing bodies gave four-strokes a huge displacement advantage, because they offer a worse power-to-weight ratio than a two-smoker. In 1998, the AMA announced a stunning rule change: Four-stroke machines of up to 450 cc in displacement could race against 250 cc smokers. Many MX and SX fans to this day still cite that ruling as the agonal breathing of the two-stroke. Development on two-stroke design all but halted. R&D resources were shifted into four-stroke bikes.

In short time, pros moved from machines that smoked to ones that didn’t. In 2004, James Stewart was the last to win an AMA motocross aboard a two-stroke machine. Of all classes of motorcycle, nothing today embraces the old “win on Sunday, sell on Monday” mantra like off-road bikes. If the pros weren’t on two-stroke bikes, why in tarnation would any aspiring young motocrosser beg his dad for one? Short answer: He wouldn’t. Off-road racing and bike manufacturing soldiered along, until now. At present, everything on the market is four-stroke except for the odd-duck KTMs and a lone Yamaha. In six short years, the rules change made two-stroke bikes “obsolete.”

Casual enthusiasts and industry insiders alike usually cite the march of technology and the need to reduce emissions as the key factors that brought the two-stroke-powered dirt machinery to its demise. That’s what killed them on the street, right? Right? The manufacturers had to go to four-strokes, because smokers are just like diesels. Filthy, polluting things that nature-haters would use. Civilized socialites use clean-burning four-strokes, of course.

So what's it all mean, Uncle Lemmy?

If you’ll allow me to be cynical and veer into speculation for a while, wheel things around a bit and look at the situation from the manufacturers' point of view. Pretend it’s 1998 again. Tier 1 Emissions standards are coming down the pipe, and everyone knows it. Sure, the OEMs could gang up and try to fight the EPA. But if you think they didn’t consider that plan 20 years prior, in regard to street bikes, you’re probably mistaken. They did. They saw the writing on the wall, and probably came to the same conclusion most people who try to fight Uncle Sam came to: You can’t fight city hall. Unsurprisingly, they came to the same conclusion the second time around.

So what could they do? Re-examine the situation. Four-strokes have some advantages from a manufacturer’s perspective. First and foremost, they are aligning their R&D teams. Why have off-road and on-road engineers working on two separate types of engines? Shared effort and resources between teams leads to economies of scale and greater institutional knowledge.

Four-stroke engines also have more components than their two-stroke brethren. Valves, timing gears and chains, camshafts — that stuff adds up quickly. They are more expensive to manufacture, and thus, more expensive to purchase. If you don’t know it, let me give you a secret of the bike world: bikes with higher cost also carry a higher profit margin. Two-stroke bikes require frequent service, but it’s usually easy enough that a backyard wrench — even a teenage kid — can usually get through most jobs pretty easily. Four-strokes, while generally more reliable, require more expensive (though infrequent) service.

What does this translate to? Cheaper R&D, more expensive bikes, more frequent service for the dealers that is liable to cost a bit more due to increased labor, and a higher barrier of entry for the backyard mechanic. Of course, there’s also the ability to comply with the EPA while, at the same time, pointing to them and saying, “Well, we wanted to keep making those two-strokes, but those guys over there don’t like to party.”

The Japanese manufacturers checked out of two-strokes, and they did it quickly. KTM, the little bastard offshoot of what used to be Penton, accepted fifth place and eked out a living producing two-strokes for riders who were unwilling to switch to the latest and greatest four-stroke bikes and for a whole crop of riders who “rediscovered” two-strokes. These things are great! Look! They make lots of power! And they run forever, provided you don’t mind doing easy top-end jobs. Whoa, these are light! And with that, KTM not only stayed relevant, but flourished in a market of riders still reeling from 2008’s economic meltdown.

Am I accusing the manufacturers of some grand conspiracy to eliminate the backyard racer-turned-wrench? Of course not. But I am suggesting that they may have looked at the situation they’d faced once before, and said, “Screw it. We’ll never beat the EPA, and ultimately, this is not going to hurt us financially.” The situation was a confluence of the threat of legal pressure and a potential economic windfall. Hell, can you blame them?

What about direct injection?

In the closing chapter of this story, which leads us into the present day, there’s a bizarre twist. So frequently I hear riders asking why brands like KTM are presumably sitting on direct-injection two-strokes and not bringing them to market. (Direct injection can be made to put fuel in the combustion chamber long after the piston ports are closed. Emissions go waaaaaay down without affecting power at all.)

The answer is rather simple: There’s no reason to. Yet. Going direct-injected does not increase horsepower appreciably. Carbureted two-strokes are still meeting emissions requirements. Direct injection simply ups the cost and complexity of the two-stroke engine in a time when a carburetor can still do the job.

The ironic twist to all this is that the EPA rules, designed to encourage manufacturers to develop newer, cleaner technology more quickly, have had the exact opposite effect: We won’t see direct-injection two-strokes until the rules tighten up again. And when they do return, two-strokes will be “clean.”

What comes next? Well, perhaps a rules change. Maybe we’ll see heads-up 250-class racing. It wouldn’t surprise me to see smokers dominate MX, SX, and enduro events in a clean sweep, but I think it would take a few years: Manufacturers will scramble to create 2T designs, and the riders will need a few seasons to adjust to ride them. I’ll go one further: I bet we see road-going two-strokers as catalyst tech improves. 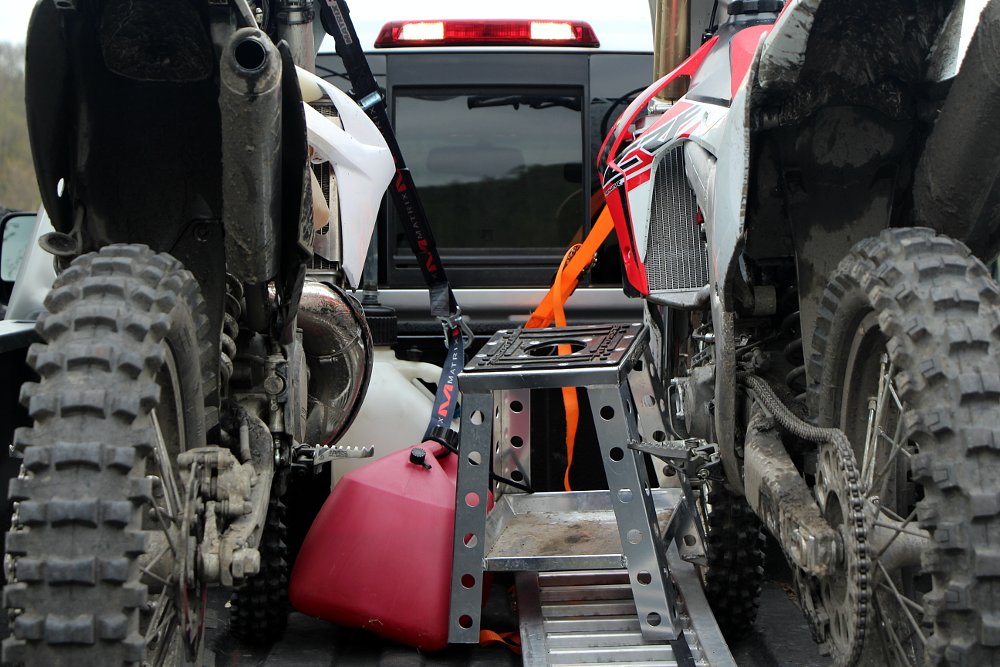 Dirt bikes! A field trip by an offroad freshman Lemmy