Viral video: Could this crash have been avoided?

You know that a crash video has gone viral when your friends who don’t own motorcycles forward you the link on Facebook.

That was the case recently, when a group of Wisconsin sport bike and supermoto riders had a bitch of a “season opener ride.” By now, you’ve almost certainly seen the video, but if you haven’t you can watch the incident here, in YouTube videos shot from two different helmet cams.

The lead camera in this video was carried by a guy named Danny. He’s a 21-year-old bartender in Appleton. He was riding a Suzuki DR-Z400SM. The second camera, a few bikes behind Danny, was carried by a woman. I don’t know her name. I think she’s riding a Ninja 300.

In the now-famous video, a Yamaha YZF-R6 rider crashes after hitting (and killing) a dog that darts into the road in the midst of the group. A second rider (on another supermoto bike) crashes trying to avoid the first. The supermoto rider barely flings himself out of the path of an onrushing semi.

There’s an interview online, by another motorcycle blogger, “Biker Dad.” He reached Danny and the second crasher — a 27-year-old machinist named Travis. Towards the end of the video, Biker Dad asks them what lessons they’ve taken away from the experience, and they respond by reminding us (again) to wear All The Gear, All The Time.

But I think that a close analysis of the videos suggests there’s more to learn.

Things they did right: They wore all the gear. Helmets, jackets, gloves, boots (Travis was wearing Kevlar-lined jeans.) They rode in a staggered formation, separated by a second or two. Their speed was reasonable, for the conditions.

The incident took place in daylight on a dry, straight, two-lane road. The dog is visible — and an obvious danger — for about four seconds before it passes in front of Danny (the guy with the first camera). Danny slows to avoid it, but turns to watch a rider following him, echelon left, who hits the dog square on.

That (unidentified) rider on a red R6 is on the brakes as he makes contact with the dog. He crashes immediately.

The second GoPro-equipped rider (the woman on the black Ninja) has a frankly terrifying view of the second crasher (Travis.) His momentum carries him several feet into the left lane, where the onrushing semi nearly smears him.

To be clear: The analysis that follows is not a diss on these riders, who were caught out by a genuinely hairy situation. Unlike a lot of videos that go viral, they weren’t riding like idiots. Things still went wrong. That is all the more reason to analyze the incident and see what we can learn from it.

There are best practices for group rides on the street that would have greatly reduced the risk of the first crash. If the first faller had been more observant he would have avoided the dog, just as Danny did. And — even given the first crash — if Travis had better situational awareness and machine-control skills, he could have escaped with nothing more than an elevated pulse (and maybe a change of underpants.)

In my decade as a hack club racer, I had guys crash in front of me many times, usually at higher speeds than this, with a lot less room to maneuver. I was almost always able to ride around those hazards without crashing — in spite of my crap reflexes and mediocre skills as a racer.

I’ve isolated seven frames from the two videos, to illustrate those safety lessons.

The dog is already visible, several seconds up the road. There’s a two-up bike passing the dog without incident. At this moment, if the rider who is passing the dog flashes his brake lights and/or puts an arm up to alert the following riders, this becomes the world’s most boring GoPro video. But he doesn’t. Come on, guys. You're riding with friends. Help them out.

Danny, the first videographer, spots the dog about four seconds ahead, he reduces his speed with a controlled, firm application of the front brake. Following riders should be able to see his brake light, but it wouldn’t hurt to throw an arm up or a leg out at this point for good measure.

At this moment, neither video clearly shows the relative position of the first crasher, who I’ll just call "R6." But there are only two possibilities: Either R6 is nearly abreast of Danny in which case he should see the dog himself; or he’s far enough behind Danny to block his view of the dog, in which case he should have time and space to react to Danny’s brake light. Either way, the moment Danny starts to slow, R6 should be on alert and slowing, too.

By the time the dog crosses his path, Danny’s slowed enough to give it a few yards. There’s a green sport bike behind Danny, followed by a second camera-equipped bike. The green bike manages to avoid a rear-end collision. Brakes alone suffice; no one has to swerve, but the view from the second camera makes it clear that there’s lots of room on either side of Danny. So far, so good.

Danny swivels his head to track the dog. Unfortunately for both the dog and "R6," he’s closing the gap. He’s on the brakes, but it’s too little, too late. Tens of thousands of people have commented on this video, and the consensus is that R6 “had no chance” to react as the dog appeared suddenly from behind the first camera bike.

Indeed, Crash #1 is inevitable at this point. But it’s inevitable because R6 either didn’t see the dog when he should have, or didn’t react when Danny detonated his DR-Z’s brakes.

The second videographer is a woman on a sport bike, with another GoPro helmet rig. Since I don’t know her name either, I’ll call her "Pink Helmet." Pink is riding in the righthand column, behind Danny and the green sport bike. She’s reaching for her clutch, responding to brake lights in front of her, before R6’s brake light comes on. Both Pink and the green dude slow enough to avoid rear-ending Danny. While they’re slowing down, R6 catches up.

At this moment, Travis is about two seconds from the first rider, who is already on the ground. There’s still space and time to apply controlled hard braking and steer around the first crasher. Unfortunately, Travis has locked up his front wheel; Crash #2 is now almost a foregone conclusion.

In a slightly different world, Travis would have been looking well ahead and taking up the brake in a more controlled manner that avoided locking the front wheel. Although many commenters have said, “There were people to his right, he had nowhere to go,” and while he himself has suggested that he had no choice but to crash the bike, there’s room and time for evasive action. The key is to slow down as much as possible while simultaneously looking for your exit lane.

There’s a lot going on here. The truck driver anticipated trouble and moved to his right, he’s already on the brakes. The rider on the green sport bike has shown good presence of mind, and has moved across the white line to give Pink some "accordion" space. That anonymous rider is the only person on this video who exploits his ability to move laterally, as well as slow down, in order to avoid trouble. It’s worth noting that Crash #1 occurred behind them at the left edge of the frame from this perspective. If Travis hadn’t locked up the front, he’d have a great escape lane between the fallen rider and his motorcycle.

Pink, who was alert enough to bring her bike to a controlled stop without rear-ending the guy in front of her, then provides us with a textbook example of target fixation, by riding into the first crasher, luckily at very low speed.

Suffice to say that at this point, she’d be better off following the green sport bike rider’s lead and moving to the far right. She caught the dude’s T-shirt in her drive chain. On another day, it could’ve been his fingers. That’s the last of many lucky breaks in this video.

So what exactly happened here?

The rider ahead of Danny should have done more to alert following riders to the presence of the dog. If they’d all hit the brakes when the dog first appeared, they’d’ve been traveling at 35-40 mph when they reached it. At that speed, there would be lots of room for everyone to chart a safe course around the hazardous hound.

If Danny had the bandwidth and machine control to do so, he too could have thrown up an arm or thrown out a leg, to better warn R6 of trouble ahead.

R6 should have seen the dog at about the same time Danny did. By the time Danny was blocking his view of the dog, it was too late.

Although it’s easy to assume that Travis — the second faller — was a helpless victim, he was a victim of poor situational awareness. Sure, the dog was a long way off at the beginning of the incident, but Travis had a clear view of three bikes ahead of him on his right, all of which had their brake lights on before R6 hit the dog.

Even if he did not become aware of the incident until R6 crashed in front of him, Travis still had the time and space needed to slow and steer between the fallen rider and the sliding motorcycle. After all, both Pink and the guy on the green bike were able to come to a near-halt before reaching the first faller, and they started out much closer to the initial impact than Travis did.

What should you take away from all this? 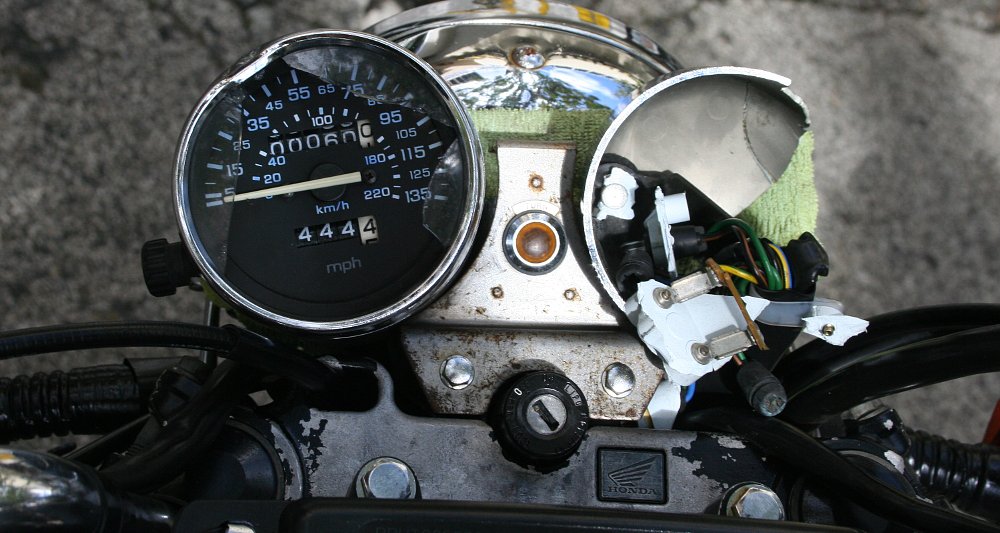