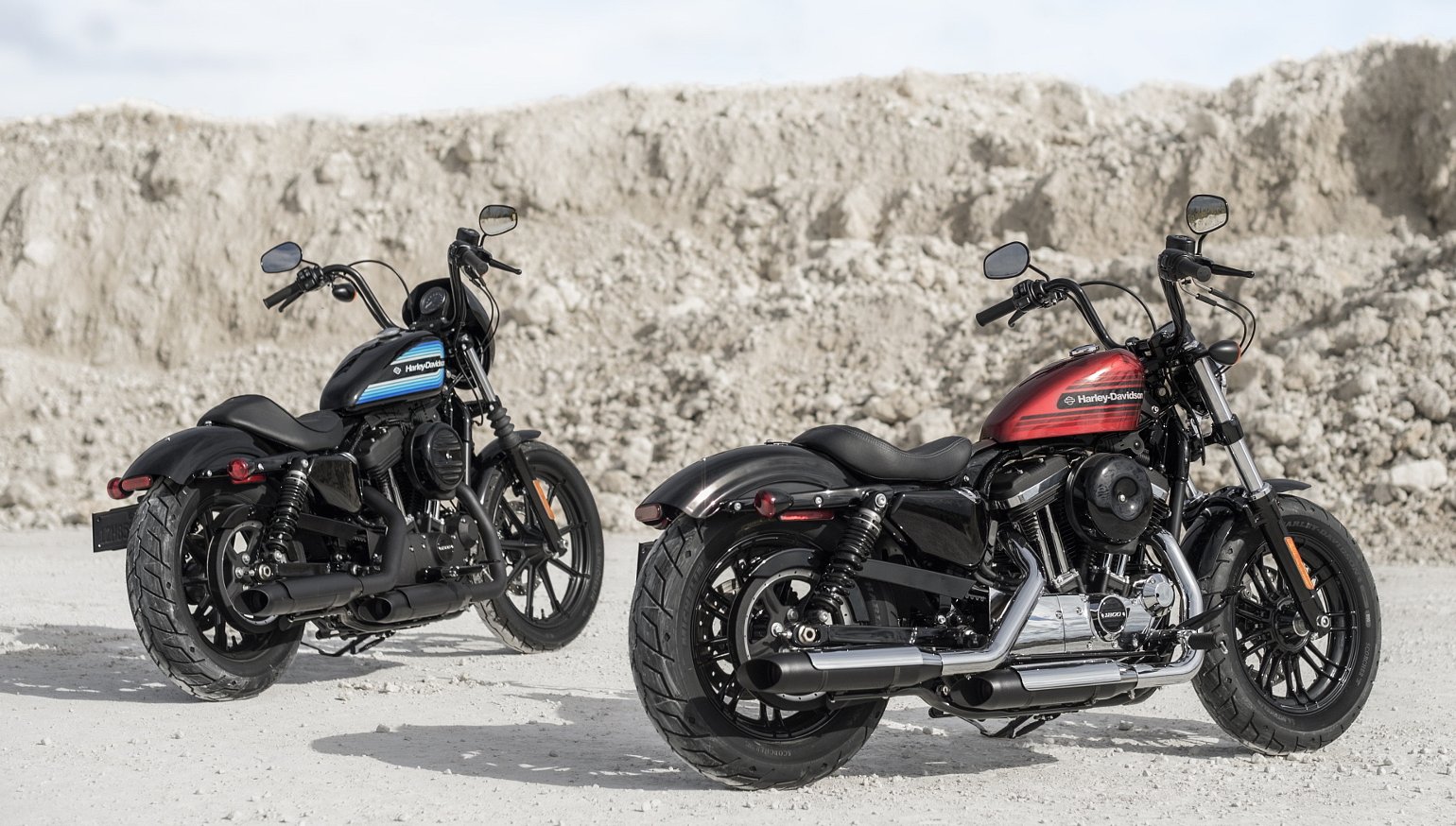 Two new Sportsters: the Forty-Eight Special and the Iron 1200

It sounded lofty when Harley-Davidson pitched the idea, and in a fit of my normal cynicism, I told everyone who would listen that it was likely to be different handlebars, wheels, and paint. Harley-Davidson, tapping into their infinite ability to piss me off, has proved me correct by releasing a pair of “new models.” Please note my use of quotation marks.

First of the new Sportsters is the 2018 Iron 1200, another take on the ever-customizable Sporty. Here’s the short version of the recipe: Take an Iron 883 and bring the displacement to 1,200 cc. While it’s apart, black out a few more bits and bobs on the engine. Black out the exhaust and the machining on the wheels, put some mini-apes on it, wrap a teeny bikini fairing around the gauge cluster, replace the solo seat with a cooler solo seat, stick a AMF-esque paint job on the tank, and enjoy. Such a project will cost you $9,999 for a model in Vivid Black.

There are probably one or two items I’m missing here (like the fact that security and ABS are standard), but this is basically what we’re looking at with this “model.” (See those quotation marks again?) I’d like to take a moment to make the same complaint I always do about the name: This bike is not related to the Ironhead. I am fairly certain there is little iron content on this bike. (OK, I guess the flywheels may be made from gray iron. I suspect that no one brags about any flywheel whose descriptor is anything other than "stroker.") I digress. Let’s move on to the other new bike.

The second item Harley released is the Forty-Eight Special. Here’s the quick version of that bike: Take a Forty-Eight, put a(nother, different) 1970s-esque paint scheme on the tank, swap a few of the black things for chrome, and a few of the chrome things for black. Remove the hole-y belt guard and swap in a non-holey one. Install “menacing” mini-apes. (Their word, direct from the press release.) “[The handlebar] offers less pull-back than the Mini-Ape, a look that really works with the steamroller front end and the smaller fuel tank on the Forty-Eight Special model,” said Harley-Davidson Vice President of Styling & Design Brad Richards.

Uh, guys? If the only quote you can come up with on a bike is about the handlebar, you might want to step back and reassess whether or not “new model” is a term you should be using. (In fairness, their press release does mention a few other things about the tank shape and paint, but those are common to the Sporty line, not necessarily individual models.) $11,299 buys you a Forty-Eight Special in Vivid Black, but that figure does not include ABS. Jesus wept.

Also, my bullshit detector is going off because apparently now the 48 has a “steamroller” front end. I remember making fun of that term when H-D described the 2018 Fat Boy’s front end the same way. First, this is a different front end. Second, is the advertising department getting lazy? Was there no other ridiculous term on the moodboard that could be used to describe a lazy, insolent front end? It’s not a steamroller. It’s a motorcycle. And it handles badly because it has a stupid tire on the front of it. Call a spade a spade. The Forty-Eight supposedly received its moniker from the year the 125 (later and more popularly known as the Hummer) peanut tank debuted, and now that tank is covered in '70s-feeling paint. Weird.

I guarantee we will see a new Sportster within 20 months. Not this type of new, I mean actually new. One thing I have to wonder about is whether these models are the “jump-the-shark” models. The 2016 and 2017 Dyna Low Rider S models were, upon a glance in the rearview mirror, Harley’s hat tip to the Dyna. The bikes received a nifty styling treatment, the biggest engine ever, ABS, and improved brakes and suspension. Little did we all know that was to be the sendoff; Harley made the hottest Dyna ever and then pulled the plug on it.

If Harley does indeed have a new Sportster coming (they do), perhaps these are the coveted bikes to have before the new ones roll out. Maybe they have a trick or two left up their sleeves, but to me, rearranging the pieces into a “new bike” is something that A) Harley is great at and B) is financially prudent for a company that’s taking a fiscal beating at the present moment. I guess we’ll see if I’m right very shortly.

I’m being hard on Harley about these models because there’s nothing here that an owner couldn’t easily do with a parts catalog and a free afternoon. (In fact, that’s likely where H-D got most of the idea for these changes, a tack they’ve taken many times in the past.) For now, I’m personally going to ignore these bikes and wait to see if Harley’s going to take a break from making “new models” and instead build some of those new models they were promising.