Arizona ride report, day four: The wind, once again, wants to kill us

What a night. Luckily I've discovered that a few Tylenol PM and two beers is the perfect recipe for a good night's sleep.

(Editor’s note: young Sean hasn’t read the fine print on his Tylenol bottle and has not yet learned about the long-term ramifications of taking acetaminophen with an alcohol chaser. Hopefully, in his old age, he won’t be scheduling his motorcycle trips around dialysis appointments.)

I slept decent but I can’t say the same for the other dudes. The wind hadn’t even completely died and we’d promised Billy he could have breakfast at Waffle House today so we packed up and got out of there as quickly as possible. Today’s plan was to get half way back home and camp somewhere back near Yuma.

By the time we got down off the mountain, it was already far too hot for 9 a.m. and we knew we were in for a long day. We re-grouped for breakfast and decided that we would see how the day went. There was talk of immediately fleeing to California and skipping the Salton Sea on our final day. But then the waffles came, delivered by the most charming old lady I’d ever met, and the discussion was tabled.

Did I mention that Interstate 8 is a bitch in spring? At our get-me-out-of-here pace, Billy’s Bonneville was sucking down a tank of gas every 80 miles and each leg felt like it took hours. The wind was even worse than the trip east and we were all hanging off our bikes trying to keep it straight. We stopped for gas at one “town” that consisted of a gas station and a closed café and huddled behind the building for a quick break when one of the locals pulled up in his truck to chat.

Two things always strike me during my travels. The first is that, for all the talk of overpopulation, this country is full of wide open space. I mean, I get it, I don’t want to live there either, but it still blows my mind how big this country is. The second thing is that all of these people we meet — you know, the ones who have chosen a lifestyle completely opposite of my own — are so incredibly sweet. Even when people in major metropolitan areas are nice to motorcycle travelers, they’re nice so they can tell you about themselves. They still don’t listen and don’t attempt to really connect.

The off-road riders and adventure tourers have a saying: “Bad roads bring good people.” It even works with paved roads, because it seems that the worse an area gets, the kinder the people get. But more on that tomorrow.

By our next gas stop, we were over it. Motel booked. A day riding at a 10 degree angle just to hold a straight line had beaten us, but we were determined to see Salvation Mountain and surrounding areas so we got a room in Yuma. The plan was to go for a swim and then hit the casinos — we were still in Arizona after all — but after eating too much BBQ and getting a drink we were too tired to go anywhere. We played cards for a bit and then I think I passed out to the end of Robocop.

Day three: The best road ever 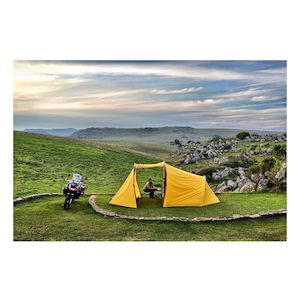