My summer vacation to Sturgis with the Davidsons

Let me tell you how I met the Davidsons.

About 20 of us, senior-level Harley-Davidson executives and fellow journalists, are about 30 miles into our ride, having just left the H-D museum in Milwaukee. We’re on our way to the 75th anniversary Sturgis Motorcycle Rally to dedicate the opening of a permanent Harley-Davidson rally point, a pavilion and theater located on Main Street. We are going to be met at a rest stop by Karen and Bill Davidson, the children of legendary designer Willie G. Davidson, grandson of one of the company’s co-founders. I was told security and photographers would be involved.

Well, they are, but in a very “Harley-Davidson” type of way. As our pack flies down the interstate, I see a few riders with large bikes pulled over on the side of the road, getting their photo taken. As soon as we rumble near them, legs are thrown over saddles, throttles twisted, and they chase us down with amazing speed. Turns out its Bill Davidson, Karen Davidson and her husband, Scott. Karen throws us the peace sign and swiftly cuts into the pack.

It’s a hell of a way to make a high-speed entrance.

So much for the formal press conference meet and greet (that will happen politely and informally over peanuts and Diet Cokes in a gas station parking lot later in the day).

It’s a rider-focused approach, and I’m happy stay in the saddle of the 2015 Fat Bob, rumbling toward Sturgis in sixth gear.

This is my first trip to Sturgis, and the first time meeting the Davidson family. I have, in true professional nature, done no other prep work than show up with my camera, a notebook, my helmet and a boatload of assumptions — most of which are to be proven wrong over the following week.

Our trip has two ride captains. J.T. Hasley is leading. He has long, gray hair. The patches covering his leather vest illustrate his riding resume, which I try to secretly inspect and admire. Later in the trip, the vest will take on near-magical qualities as he pulls an endless supply of cold beer cans from it. He has an easy charm and seems consistently, and simultaneously, at rest and littered with duties.

The other captain is Thor Robinson. He is, I estimate, nine feet tall, 500 pounds, with a shaved head and goatee. My math may be slightly off, but the presence is not. He speaks with a firm baritone. I first find Thor in the middle of recounting, in awesome detail, a previous rally where he witnessed a hotel lobby shooting.

I am an outsider to the group of executives and long-time trade journalists, but the group is fun, talkative and enthusiastic about riding. After a refueling stop, I swagger over to a group of execs in mid-conversation.

Thor immediately follows me, walks straight up to me and bellows, “You need to stop pulling in front of me.”

Coming off a light breakfast, my insides stay where they should, but I freeze. My jaw likely drops.

“Every gas stop you pull right in front of me, and you take that helmet off and all that luscious hair falls over the place,” he says, and rubs his bald head in envy. The group explodes in laughter and the blood returns to my face.

Thor, I will quickly learn, is lively, outgoing, previously an attorney, and a huge fan of the Minions from Despicable Me. His combination of intimidating looks and welcoming demeanor turns out to be the perfect preview of the general audience I will find rolling into Sturgis from all around the country.

Over the next three days we cross the prairies of Wisconsin, Minnesota, and South Dakota. The wide-open slab is either torturously monotonous or beautifully peaceful, depending on your disposition and caffeine levels. Our route includes breaks at local Harley-Davidson dealers, where the Davidson family’s presence has been promoted to local Harley Owner Group (HOG) members. Some of the stops draw local TV crews and well over 100 HOG members, layered with leather vests and patches, eager to meet Bill and Karen.

The best word I can think of to describe the family’s demeanor is caring, which maybe sounds a touch soft for the Motor Company, but is accurate. They sign T-shirts, fuel tanks, and memorabilia. They show an honest and patient interest in the riders and a deep responsibility to carefully shepherd the iconic American brand. In Minnesota, Karen, the Creative Director for H-D apparel, meets with a group of young girls to share her story and inspire. The moments are fun and powerful, tying in American history, family legacy, and community building — all with two wheels at the core.

As our group nears Sturgis, the road becomes dense with bikers, thousands of them, from all around the country. And each and every one of them wants to talk to you. Seriously. The riders at Sturgis are shockingly friendly. I chatted with dozens and dozens of bikers, all with fantastic stories and an ease of conversation. It’s hard to imagine any place so odd, so foreign, feeling more welcoming.

Part of the group’s duty is to hold an opening ceremony for a Harley-Davidson rally point on Main Street, where the company celebrates an agreement with the city to make Harley-Davidson the official motorcycle of the Sturgis Rally for the next 75 years. This responsibility brings two fantastic opportunities. The first is meeting and chatting with 82-year-old Willie G. Davidson, who designed the Super Glide and the Low Rider, and still beams with enthusiasm for motorcycles. When police motorcycles pull into the parking lot, his wife, Nancy, enthusiastically notes, “Check out those Vance & Hines pipes!” What a couple.

The second opportunity is riding down historical Main Street in Sturgis on my Fat Bob, following the Davidson family, with the street cleared by police escort.

It’s another hell of an entrance.

Hundreds of bikers await the family and the “chain breaking” dedication ceremony. They swarm the family for autographs and I watch in awe as they politely wait for their turn. I’ve seen worse-behaved Boy Scout troops.

Main Street and Lazelle Street house the vendors, bars, and antics you expect at Sturgis. They are fun, and there are great bikes to see and vendors to visit. More interesting yet is Sturgis City Park, which to me was like walking into my Instagram account in real life. Rusty Butcher, Speed Merchant, Biltwell, Roland Sands, Hot Bike, Unknown Industries, Indian Larry, all host tents, events, stunts, bike shows, concerts, and races. Parking is free, as are most of the events.

Further down the road at Buffalo Chip, Michael Lichter’s Motorcycle as Art custom bike show is open. Thirty-five builders made bikes for the show, including custom builds from Revival Cycles, Klockwerks, Loaded Gun Customs, Paul Yaffe, Roland Sands and Billy Lane’s Choppers, Inc. Michael is also exhibiting many of his own photographs, several of which document the rally, the earliest dating back to 1979. I have the pleasure of walking the exhibition with him as he explains in detail the story behind his many iconic images.

Last, but certainly not least, is the fantastic twisty riding to be had nearby. The Black Hills National Forest, Deadwood, Custer, Nemo, and Mount Rushmore offer great roads and gorgeous scenery. The hills are stocked with scenic camping spaces, rolling rivers, farmland, BBQs, and parties.

It’s no wonder many of the bikers I met have been coming to Sturgis for decades. It’s impossible to come here and not find something to be a part of, whether you’re half of the most famous name on a gas tank, like the Davidsons, or a newcomer like me. 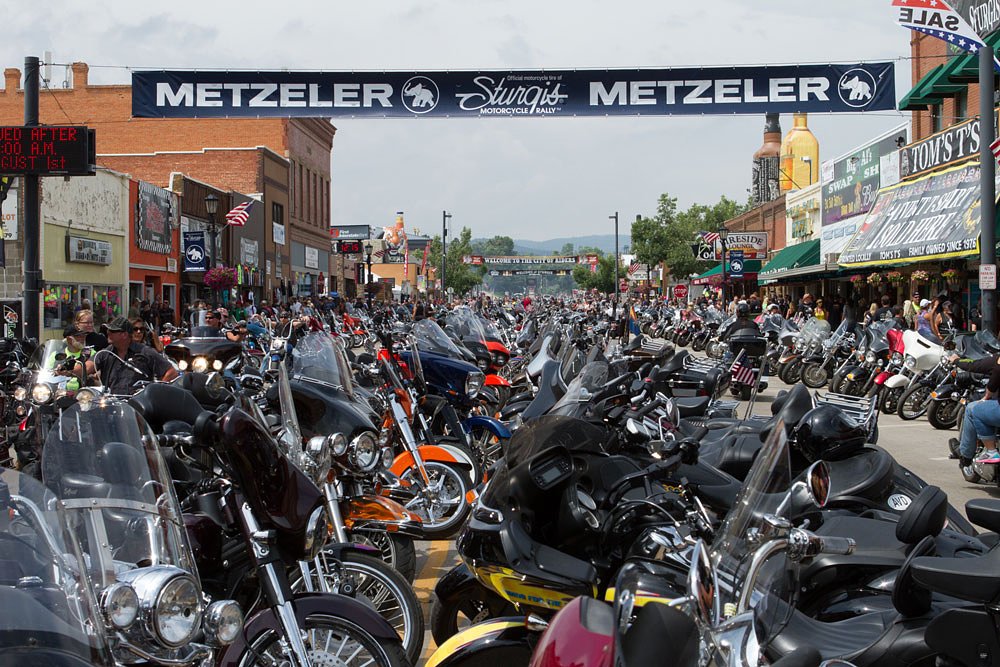 Ramblings of a rally rookie at Sturgis Lemmy