A buddy of mine, Hutch, built a cool trike a few years back. It has a homemade frame, a Honda CB900 powerplant (complete with 10-speed transmission!) a rear end from a Suzuki Samurai 4x4, and the wheels are spares from an old Ford Thunderbird.

Every single guy I hang out with has wanted the trike, and it's changed hands quite a few times. There's a well understood rule that the trike stays "in the family." It can be bought and sold between Hutch and his friends. You see, Hutch has so much time into building it, that selling it to a stranger would be giving away a lot of his sweat equity.

With this story about Mike, we introduce a new series called "Stuff that doesn't suck." In the moto world, we all see things that aren't far-reaching news, but still stir our emotions and make us stop and say, "You know, that doesn't suck." Whether it's a story like Mike's, an inspired little piece of engineering or customizing out of some back-alley garage or an act of kindness or generosity, we want to shine a little light on the good stuff in motorcycling. Seen something that doesn't suck? Tell us about it. Send an e-mail to CommonTread@RevZilla.com.

The trike has changed hands once again. Mike Halloran, proprietor of TWT Motorcycle parts, needed a new ride. He's a great friend who rode a friggin' lot of miles, until recently. In 2013, I was riding with Mike in Kentucky, and he came off his bike. Mike was in bad shape. He suffered severe head trauma and his leg was banged up pretty good, and his beloved Triumph America was wasted. He was airlifted to a hospital, but even after he was stabilized, things weren't looking good. He did not seem to be coming out of the coma he was in.

I remember being horrified when I read a message that Mike's wife sent to his riding buddies that basically said that Mike was going to be taken off life support, and we needed to clear our calendars to come have a big party. You see, Mike had always expressed to his wife that when he died, he wanted his friends to get a keg of beer and celebrate his life, not mourn his death. Typical Mike, typical Irish wake. Have I mentioned I have seen him in a kilt? I have.

Fast forward a couple of weeks. Somehow, he pulled through. He came out of the coma. His leg was not salvageable. The doctors lopped it off above his knee. (Mike's a chopper!) When Mike came out of the coma, he could not speak. In classic Mike fashion, he alerted his wife to his consciousness by grabbing a handful of her unmentionable parts. That's just the kind of guy Mike is.

Mike spent a long time learning how to live a normal life again, but we never worried. As long as his heart was beating, he'd make it. A leg seemed to pale in comparison to the alternative.

I recently saw the following photo, and felt a wave of emotion.

It's important to me, because nearly two years after my buddy lost a limb — and nearly his life — a machine lovingly hand-built by a friend has found a new owner "in the family." Once again, I'll get to ride with my friend on the same annual run.

Now that's something that doesn't suck. 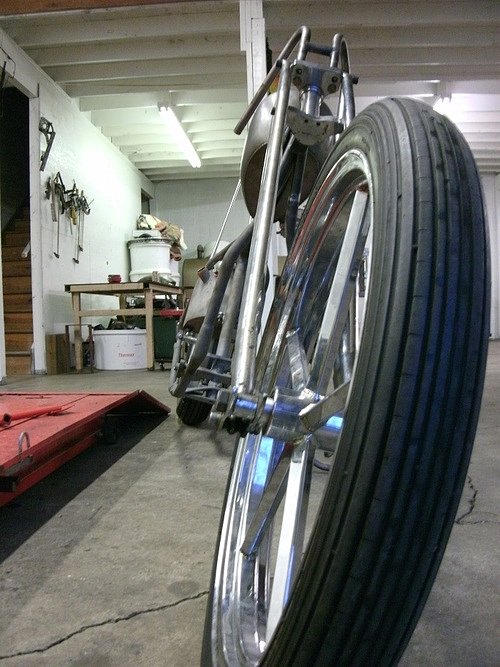 Save this Softail: Part 2 Lemmy