If you’re thinking about modifying your Harley, dollar for dollar, a saddle may offer the biggest bang for your buck.

When you amortize the cost of a really top-shelf seat over the amount of time you own your bike, the increase in style and function really is easy to justify. Items that are made to interface with the human body — like clothes, or furniture, or even motorcycles themselves — typically need to be tailored to an individual. Items that are made to fit many people tend to make compromises. Your OEM saddle was contrived to fit a wide swath of people with different shapes and needs, and most importantly, it was made to meet a budget, which impacts its quality. By selecting an aftermarket seat that is going to fit you and work for your riding style, you are taking a big step toward making your bike more rideable.

If you’re new to seats completely, be sure to check out our Harley Seats 101 crash course, and also our Harley Seat Install Video below. We’re focusing primarily on late-model stuff in this article, but whether you've got a shiny new '15 or you’ve got an old dinosaur and need some help, get in touch with us. It’s not unusual to see a Pan or a coupla Shovels parked next to a Twin Cam or an Evo Sporty in our employee lot.

How To Install a Seat for Harley

Gone are the days of sprung seats and pogo sticks. Modern Harley-Davidsons, being suspended at both ends of the bike, typically use frame-mounted seats. On most typical air-cooled Harleys, the front of the seat has a locating tab that slides into a corresponding slot on the frame. The rear of the seat bolts down using a quarter-inch-20 fastener. Some bikes, typically older ones, have a quarter-inch-20 nut welded into the fender. Newer bikes have a simple hole with a locating notch. This article will focus mainly on the later-style bikes.

Seats come in a few styles: solo, two-up, and what I’ll call a “long solo,” which is sort of an intermediate-length seat. Because of this, you may find different attachment points drilled into your fender. A corresponding threaded fastener is held in the hole(s) with a retaining clip. That threaded hardware often needs to be moved. Because of the close fender-to-tire clearances that are now in vogue, it may appear that you need to drop the wheel in order to move the hardware. You can do it the easy way by simply pulling the hardware up into the fender with some string. If you have trouble visualizing it, check out our video, where we walk through this process.

Here are a few tips and tricks we've picked up over the years.

If you have a new seat going onto your H-D, I am envious. The seat is foundational, from both an aesthetic and ergonomic point of view. Seat replacement is simply a way to make your bike work better for you, be it from a styling perspective or a functional one.

As a parting thought, if you are in trouble with an install, have a general seat question, or some awesome tip to add that I missed, let me know in the comments section. I monitor this stuff closely for a few days after we publish it, and if you need help, I am here to give it. A happy ass is… well, a happy ass! 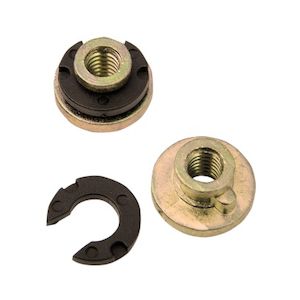