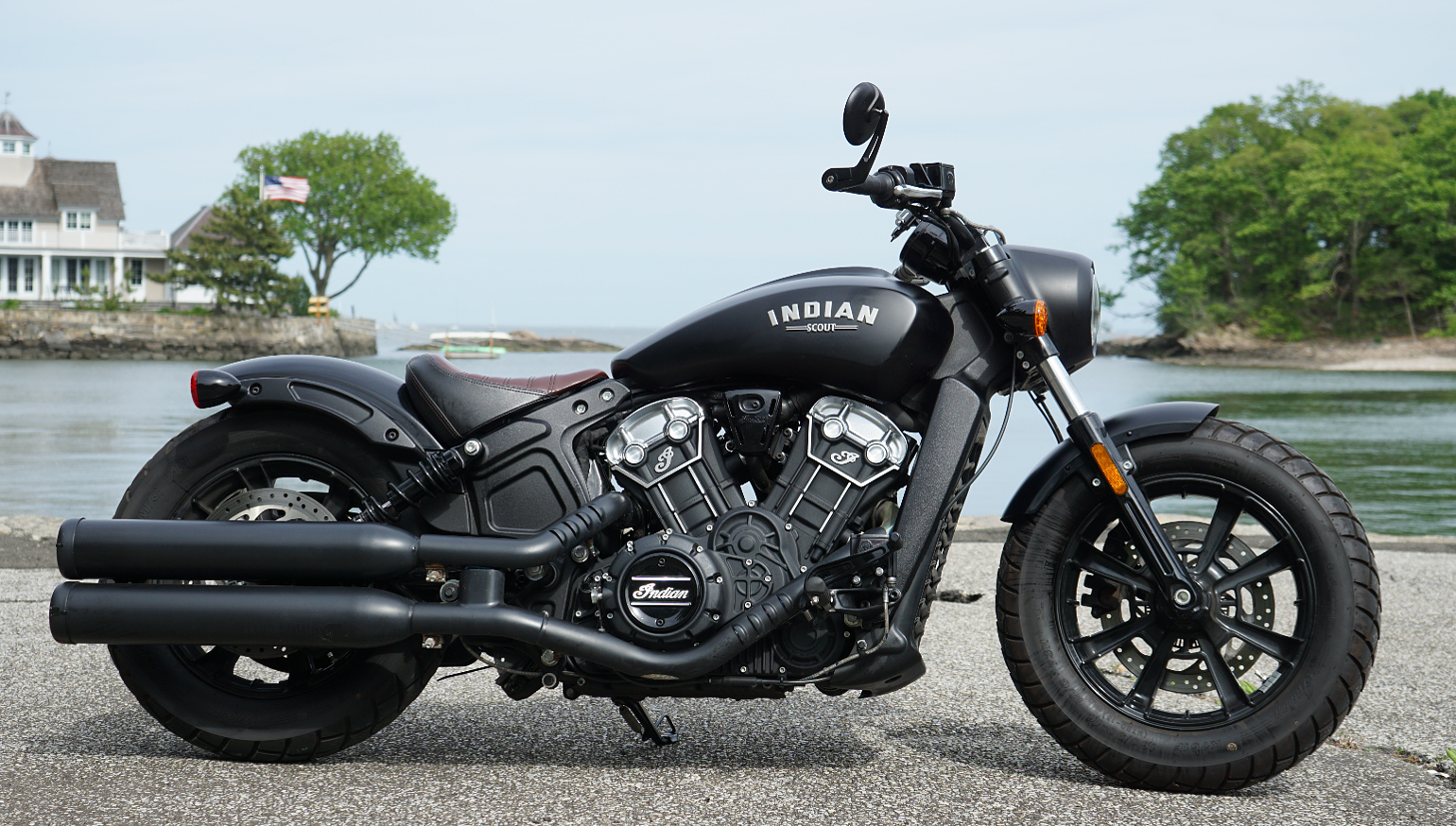 Living with an Indian Scout Bobber

The “everything old is new again” maxim resurfaced in motorcycling, this time with the return of the bobber. Triumph delivered its contemporary rendition of the genre with the Bonneville Bobber and Harley with its Street Bob. Then there’s Indian’s entry, the Scout Bobber.

I rode a 2018 ABS version (which was effectively unchanged for 2019) for 11 months. A few thousand miles on the bike over four seasons offered a pretty good take on Indian’s revival of a modern classic. Even as a non-cruiser guy, I became fondly attached to the ISB. Read on.

That I’ve never ridden a bobber isn’t so surprising since the form’s roots are in my grandfather’s generation. The gist of the style is to strip down a chrome and steel twin to its simplest form for better performance and a higher cool factor. Originally, weight reduction included chopping, or “bobbing,” the rear-fender — thus the bobber moniker. Today, now that Bobbers are more about projecting a certain throwback look than losing weight, performance and style occasionally come into conflict.

The general formula for a bobber today is to lower the bike, make it a single seater, add some fat tires, and away you ride. Indian did that with their base model Scout to create the Scout Bobber. In addition to the cosmetic makeover, Indian made several technical changes that impact the Scout Bobber’s ride.

First, they made it a little less cruiser by moving the pegs back and switching to a tracker-style handlebar, which puts the rider in a slightly more on-top-of-the-bike riding position. Indian also lowered the Scout Bobber, reducing the rear suspension travel from 3.0 inches to 2.0 inches.

Skinny on the ISB

I put over 3,000 miles on the Indian Scout Bobber, using it as a daily rider in all conditions except ice or snow on the pavement. I rode it on highways, rural roads in and around New York and Connecticut, in New York City, and on the Thruway to get in and out of the city.

Before I really got embedded with the bike, an early observation was how folks responded to it. Judging by people’s visual reaction to the Scout Bobber, Indian nailed the styling. The stripped-down motorcycle garnered attention and compliments everywhere I took it.

While parking in New York’s trendy Greenwich Village this spring, I noticed some European-looking tourists with camera phones in wait. I felt flattered that perhaps they thought I was a celebrity. They were actually waiting for me get out of the way so they could snap shots of the Scout Bobber, so Indian’s bobber definitely attracts attention, if you’re into that kind of thing.

While the bike’s looks are a hit with many, the star of Indian’s Scout Bobber show for me was the motor. The 100-horsepower twin is responsive and the torque curve is extra flat, topping out at 72 foot-pounds. To boot, it has a cool exhaust signature — an echo-ish low at idle with a thoroughbred race-engine sound when on the gas.

The Scout Bobber runs super smooth at low rpm, but when you need to move it delivers strong power and torque on demand through all six gears, pulling hard past 70 mph. This isn't a sport bike, but you can knee the tank, scrunch down, go to the balls of your feet, and get some decent performance out of the Scout Bobber.

For a cruiser, it navigates turns better than most. The biggest impediment to going a little faster in corners on the Indian is the length of the foot pegs, which I dragged from time to time when pushing the lean angle. Officially, Indian says the maximum lean angle is 29 degrees, which is not a lot. One could conceivably look for a shorter pair of pegs (by about an inch) to improve the Scout Bobber’s cornering clearance, but if you lean it very far you could still drag some hard parts.

If you're not accustomed to cruiser ergonomics, it takes a bit to get used to the bike’s riding position. I found it comfortable (to tolerable) on up to hour-long rides.

That leads to my biggest gripe about the motorcycle: the meager 2.0 inches of rear suspension travel. I am six feet, two inches tall and weigh 190 pounds and I used up nearly all of the Scout Bobber’s stock rear shock clearance as soon as I sat on it.

That wasn’t an issue on smooth pavement, where the Indian rode like a charm. But as soon as surfaces got rough — which happens more often these days on aging U.S. roads — riding the Scout Bobber turned into a bum-jarring affair. The stock rear shocks are soft, with the only adjustment being preload. I inadvertently got the bike airborne a couple times, riding over road patches on I-95. In the air by even millimeters is not where I prefer to be on a 554-pound motorcycle.

I noted several examples online of Scout Bobber owners swapping the stock rear suspension for Indian’s Performance Shocks by Fox (with preload and rebound adjustability) for a reportedly improved ride.

On mechanical performance, the Indian Scout Bobber operated great, save a few minor technical issues. The front brake went soft over the New York winter and Indian Motorcycle of White Plains replaced the master brake cylinder under warranty. They also replaced a leaky engine gasket during an oil change.

The biggest issue with the bike came one afternoon when the engine, gauges, and ignition went totally black on me while riding in Brooklyn and would not turn back on. After checking the battery wires and hanging out for a couple hours as the guy in leather riding gear in a nice orthodox Hasidic neighborhood, the ignition returned, the bike fired, and the issue never resurfaced. Indian reviewed the Scout Bobber to attempt to determine a culprit. They believe it is a one-off, but are still looking into it.

So my one-line take on the Scout Bobber after nearly a year: It’s badass little bike with an awesome motor and excellent styling.

Indian put together a great package with the motorcycle and elevated a classic form for modern times. The bike has character and became the first cruiser I’d ever considered owning. The levels of comfort and handling mean it’s definitely not a tourer or sport bike, but it did serve as an excellent daily rider, with awesome acceleration and decent overall performance (for a cruiser).

For all my embrace of tech and motorcycling (see my piece on too much tech), I also appreciated the Bobber’s simplicity, without dozens of digital settings to fumble around with or distract me while riding.

My suggestion to Indian is to set the engineers to retooling the Scout Bobber’s rear end for a smoother ride and then leave it (except for minor refinements). If I owned the ISB, I’d immediately upgrade the rear shocks, let the motor growl a little more with a performance exhaust and air intake, and then ride it endlessly.

The Scout Bobber’s a bike that’s likely to maintain a timeless fun and cool factor no matter what happens in motorcycling’s future. 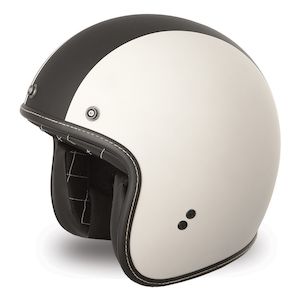 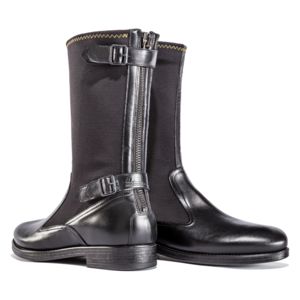 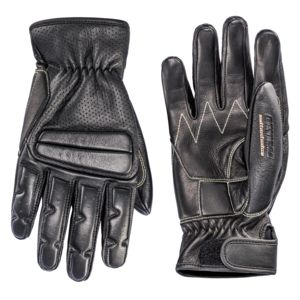