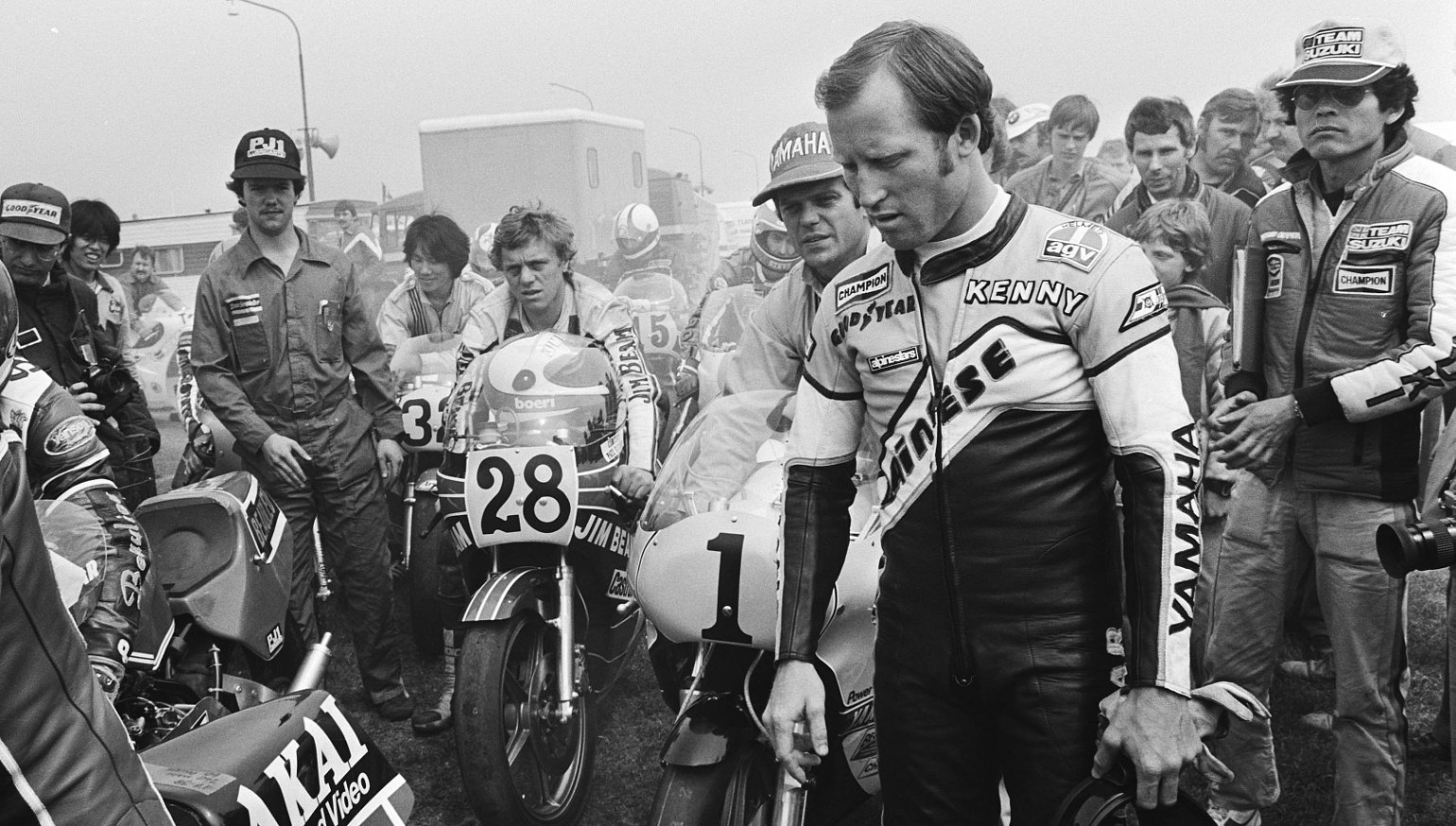 Knee down — who was the first?

I popped over the cube wall and looked at Spurg and Greaser. “Do either of you guys know who was the first racer to consistently put a knee down?”

Andy looked intrigued, but Spurg gave me a sour face and put his headphones back on. He’s noted before that I often ask questions to which I know the answer and he’s learned to avoid them, as a monologue often follows. I was serious, though.

Why would a rider want to put a knee on the tarmac?

Let’s pause for a moment. If you ride a motorcycle in 2019 and you didn’t start last week, you probably know that dragging a knee on the deck when cornering is a little like having teeny chicken strips or having a literbike in your garage. It doesn’t actually say anything about how great a rider you are, but there is some lore and machismo surrounding the act. But if the racers can do it and you can do it… ipso facto, you must be real fast, right?

Why would a racer put a knee on the tarmac?

You’ll read all over the internet about how a knee down is a feeler gauge for lean angle and confidence-booster blahdy blah blah blah. The reason racers drop a knee to the tarmac has nothing to do with that. More lean angle allows a racer to go faster around a corner — but there is a limit to lean angle (hard parts drag, or barring that the rider literally rides off the edge of the tire). To go faster, the racer keeps the lean angle the same, at or near maximum, and moves his weight to shift the center of mass, allowing the motorcycle to corner faster for a given lean angle.

How do we determine who was the first?

Now before I continued answering my own question I insufferably posed to Spurg and Andy, I pointed out my own personal qualification for this particular award to my mustachioed colleague. I always figured it would be hard to pin down “the first.” I mean, lots of guys hung a knee off the bike some. Hell, plenty of riders probably even got a knee down on the way to a crash. And I can’t review every film and photo out there, of course, and see who touched down when. But I doubt there would have been much exaggeration of the act. Knee-dragging probably wasn’t a particularly desirable activity way back when; no one thought it was badass. Instagram didn't exist. Why bother unless it made you fast?

Someone who was doing this regularly would have been tearing up leathers like no tomorrow, because there were no knee pucks or sliders before the modern era. So I figured let's look for a rider wearing modified leathers to prevent their demise when he attempted this little trick. Someone who did it once would have a hole in his leathers. A racer doing it often, though, would eventually take steps to prevent his race suit from being fried through the knees. I was looking, basically, for a proto-slider. And one guy kept popping up on my radar.

I’m not saying this is the only way to look at this, nor am I suggesting it’s my way or the highway on the topic. I am suggesting this is demonstrable, empirical, and should help sort some things out. Andy nodded. I had at least one person buying what I was selling.

The lesson I gave Andy and Spurg

“The first guy to drag knees on the reg was King Kenny," I told my colleagues. "You can see pictures of him with his suit duct-taped up. After that, they morph into these weird dotted slider things he wore over his leathers. A lot of other guys did it soon thereafter, but Kenny Roberts was the first." (I said this with a bit of pride. I like Kenny Roberts. A lot. He’s real cool. I keep looking for KR memorabilia on eBay. I’d take a jockstrap at this point; I don’t care.)

Now, many of you will stop me right here. You’ll say, “Lem, you idiot, Kenny Roberts himself said he didn’t invent knee dragging!”

You’d be right, of course. Kenny attributed his riding style to The Flyin’ Finn, Jarno Saarinen. Kenny himself said, “I started hanging off at Ontario Motor Speedway in 1972. The track had this horseshoe where I felt so uncomfortable, like I was going to crash. So I watched Jarno. He leaned off the bike with his knee out, so I leaned off and all of a sudden I didn’t have that bad feeling.

“By the end of ’73 I started sliding road bikes. I’d be in a foot and a half drift with my knee on the ground. People said ‘You’re the craziest sonofabitch I ever seen in my life and you’re going to die’.”

I explained this to my colleagues, and then also pointed out that although Jarno was a hell of a rider and used that knee quite a bit, he didn’t seem to go to the asphalt with it if photos of his leathers were any indication.

They nodded, and I called up Lance to get his approval to write what I thought would be a fun, open-and-shut article. He thought it sounded fun, and we talked for a while, and I think he had heard the same things over the years that I had, but apocryphally, he told me something he’s said before to me when I rushed off headlong to do something. “Research it and do your homework before you write.”

But was it King Kenny?

At first I just assumed I’d be confirming what I already knew, until I found a photo showing what appears to be a way earlier photo of a rider using his knees as landing gear.

The internet seemed to think that this was John Surtees, the only man ever to win both motorcycle grand prix and Formula One world titles, laying some leather down during the Eisenhower administration. I'd recognize those pipes anywhere; that appears to be a Vincent, which would have been very, very early in his career. (Surtees was on Nortons by 1956! This was groundbreaking!) I mean, this would have been 16 years (or earlier!) prior to Kenny biting Jarno’s fresh, right? And you can see clearly there’s some form of knee protection on his leathers.

I got a hold of fellow CT contrib Mark Gardiner, as he is a bit of a historian and a racer. (Hell, he’s so old at this point his racing is historical!) I thought maybe Paul d’Orleans might have some insight, too, as he has written about the man and clearly knew of his exploits. I was pretty excited about this development, thinking my investigative reporting skills must be getting sharper, but Mark grounded me quickly about the rider's position being vastly different than Surtees'. "Something about that Surtees 'knee down' photo stinks to me. He certainly wasn't using the technique to go faster in races; not even close. Photos of him on the MV Agusta period show a completely classic style."

I had my own qualms about the picture, but most were more about the machine than the man. The Vincent looks “not quite right.” There are crash bars fitted. There’s also a rear stand bolted to the bike. Hell, it even has a headlight! That doesn’t really look like a race bike. And I couldn’t find others like it. I mean, if he was doing this for any serious period of time, one would think there would be a few pictures of it. I mean, there are lots of photos of KR with proto-knee-slider things.

So I guessed I needed to research more. Sure enough, after digging, I found an article, penned by the very man in the photo — a man who is definitely not John Surtees. In fact, that’s exactly the subject of his article! The photo was staged, which explains the incongruities Mark and I noticed.

I think at this point, it’s safe to say that Roberts was the progenitor of the knee-down style, by way of Jarno Saarinen. This was, of course, exaggerated and taken further by other riders down the line, but Kenny was first. Other riders began trying it as well until the early 1980s, when it became effectively mainstream.

Until somebody sends me an earlier (genuine!) photo of someone with a protected knee down on the asphalt, I think it’s safe to say that Kenny was the first, and he riffed on an idea he got from another racer. 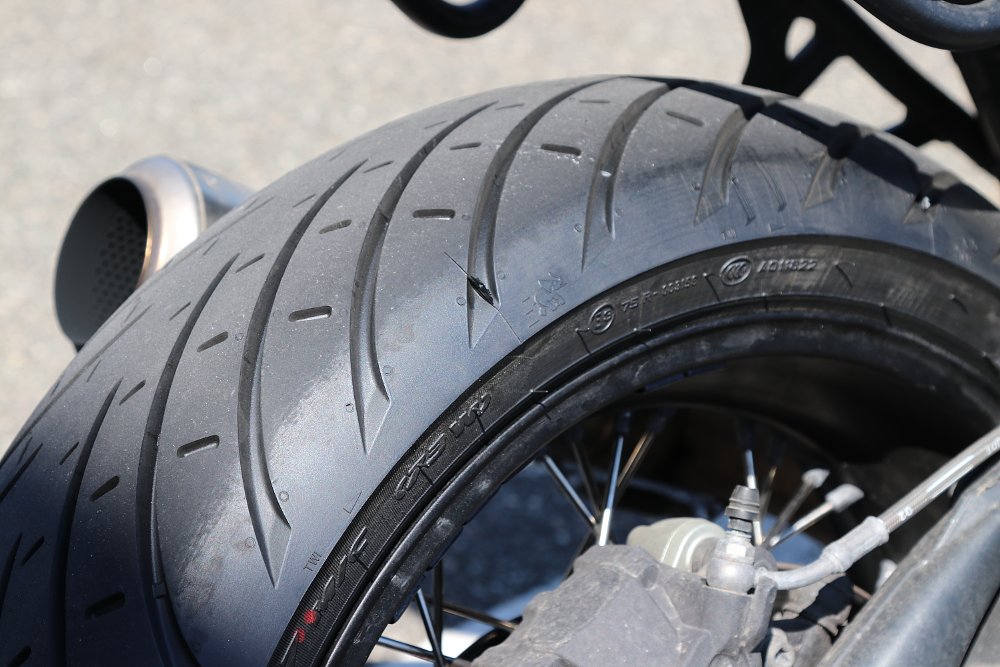 What are chicken strips on motorcycle tires? Andy Greaser