How to ride a motorcycle: Pillion edition

Lemmy
0 Comments
"What’s this all about?"

That’s what I was thinking as I was trying to navigate my chopper into a parking space. There was a car in my way, and each time I tried to lean the bike over in any direction, it was like hitting a wall. The bike was nearly upright, though. What gives?

Then I looked down and saw two boots and two riding shoes on the pavement. The boots were mine, and the riding shoes belonged to Brett, our content director. He had jumped on the back for the quick hop over to the pizza joint for lunch.

I asked him (politely, because he is my boss) what the hell he was doing. He said he thought we were going to fall so he put his feet down and then kept them there. He had no idea I was trying to move the bike, and every time I leaned one way, he was countering my movements, his own riding habits kicking in. As such, my bike would not maneuver. I started replaying the short rip to the pizza joint in my head. He was teetering between the sissy bar and me when we started out. His hands were sometimes literally hovering in front of my chest, and sometimes reached awkwardly around behind himself to the sissy stick. I had no clue what he was doing back there. After thinking it over, I realized he had no clue what he was doing back there, either!

Now, it should be noted that Brett is an infrequent pillion. More often, he’s astride his own bike. This was a reflection point for me. Being a great passenger requires a different skill set than being a great rider. We riders are not always great at communicating what those skills are to our partners in crime. As such, I sat down at the scribblin' machine to write a bit about what a pillion should do. Passengers (and passengers-to-be), the following is a simple and direct instruction sheet hopefully explaining well the things we need you to know, and their rationale.

Riders have two safety standards to meet: the law and their own personal whim. Passengers have three standards to meet: the law, whatever you want to wear (your whim), and whatever your rider tells you must wear. Don’t wear less than what you feel comfortable with. If you don’t know what you should be wearing, research what gear a rider wears. The pavement doesn’t give a shit if you have a motorcycle license and won't treat you more kindly just because you're not operating the motorcycle, so your gear should not be sub-par. Often riders will make a pillion gear up more heavily than they are, simply because there are additional legal and moral concerns to be considered when assuming responsibility for a passenger. Note here I am not pushing any minimum level of gear. I am merely saying passengers should wear the greater of what they feel they need or what their rider feels they need.

Announce when you’re getting on the bike

A lot of the advice that follows is about communication. The rider and passenger should have a procedure. The rider should let you know when it's OK to get on the bike and you should let the rider know you're about to mount up. A tap on the shoulder, a verbal announcement, whatever. Just state your intentions. It helps if you always get on from the same side, too. Every now and then my wife will jump onto the bike from the right side, which throws me off if I didn't expect it. Develop a habit and stick with it, and if you need to deviate, just give us a heads up, please, passengers. Once you're in place, let us know you're ready to go, too.

Keep your feet up

There is absolutely no time when your feet should hit the ground other than mounting and dismounting.

If our passengers hug us, they go where we go. We riders like that because then we know how to move on the bike. Think somewhere between “hoverhands” and “death grip.” On larger bikes designed for passengers, especially with a backrest, feel free to sit back and relax. On all machines (but especially littler ones), passengers who flail about upset the balance of the bike and act as an unpredictable counterweight.

If we pull your arms around us, hang on

Again, it's about communication. This is my way of telling my passenger I'm about to do something stupid. We should do it together, though, which is why I want you to hang on. It's more enjoyable for everyone if we both remain on the bike throughout the duration of the wheelie. Your rider may have another way of communicating this message. It doesn't matter what it is as long as you're both speaking the same language.

Don’t be offended if we ask you to move

Especially on sport-oriented bikes, the front of the seat and back of the tank often meet in a valley that can be tender on wedding tackle. Normally, a rider will simply scooch his or her ass back, into the pillion’s crotch, and slide both people backwards. It’s not a display of displeasure or anger, we’re simply fighting gravity.

Watch out for the decel

When we slow down hard, it's likely our helmets will click together. Not a big deal. It happens. No need to apologize or try to stop, unless you have a bowling ball for a melon and you are smashing it around uncontrollably.

You may also need to support yourself during braking. I prefer passengers use their chest and lean into me, but some riders like the passenger to steady herself against the tank using her hands. It's OK to ask which the rider prefers, but if you forget, assume they don't want you beating up the paint on the fuel tank.

Seriously, you’re back there, so help us out! It’s also nice to tap us on the shoulder to point out exits, turns, or road signs we may have missed, too.

Remember not everyone is great at this

In a car, driving with someone in the passenger seat isn’t really appreciably more difficult than driving alone. On a motorcycle, riding well two-up requires increased alertness, strength, stopping distance, acceleration time, and attention to balance — at a minimum! That's something for you to think about before you hop on the back with the stranger you just met at the bar. Likewise, that's why we ask your patience and cooperation with these tips. Two-up riding is extra work for us and we can use the help.

Backing up a bike with a passenger on it is a pain in the ass, especially for riders who are short of leg or when a heavy motorcycle is involved. We may ask you to get off and walk the last few yards while we back into a parking spot. It's not personal.

Some riders do not want you to use the grab bars

I know they look like you should be using them, but sometimes they position you in a way that we can’t feel what you’re doing, or it makes the bike feel less stable. This is usually problem on faster bikes — they accelerate really quickly, and it’s not likely you have the upper body strength to keep yourself from coming off the back. It’s not always up to you to determine the safest position.

The converse of this is there are some times when that “hug” position doesn’t work well, like when it is hot out. Your chest + my back + hot day = Small Of Back Soup. No one likes that. It can also be tiring on sport-oriented machines, which often force a rider to bear weight on his arms. Doing what are effectively pushups with a heavy, sweaty backpack (you!) is kind of exhausting.

Watch out for the pipes

Speaking of exhausting, remember that we’re sitting on top of an engine. There are hot parts everywhere! Especially relevant for you is the exhaust. Don’t burn yourself, and don’t let your shoes touch it when you are seated. (Melted rubber is a real pain in the ass to try to remove, and you probably like those shoes.) Remember to stay clear of the pipes, especially when getting off the bike. If you are dismounting on the off-side of the motorcycle (that's the side away from the sidestand, your right as you are seated on the bike) and there are pipes over there, you have to get waaaay far over the bike to avoid 'em.

Don’t get off the bike until we tell you to

Just like getting on, don't surprise us when getting off. We’re not being domineering, we’re trying to keep from fallin' down! If I am moving the bike slightly, you may not even realize it.

There are other times when it’s dangerous to jump right off. For instance, if other riders are backing into spaces on a curb one by one, you may want to jump off the left side. The problem is that’s exactly where another bike is trying to pull in and you could get hit. Stay put and ask if it’s safe to jump off.

Fold up your footpegs when the ride is over

It’s courteous and we often forget to do it.

This one goes out to all the fellas out there. To put it delicately, some guys have issues riding as a passenger with another guy. I never hear this from the women.

For you guys who have an issue, talk to an oldtimer. It never began to be “weird” to have two dudes on a bike until the late 1970s or early 1980s. Hang on, and give your rider buddy a big damned hug if he tells you to.

I cannot tell you how many guys I have told to wrap their arms around me, only to be told “That looks gay.” First, you’re on a motorcycle. It looks awesome. No one is thinking about what team you play for. Second, stop being so damn presumptuous that people think you’re good looking enough to be involved romantically with me. You’re hideous; I could do better. And don't do that stupid thing where you try to hold on to my shoulders. I need to move those so we don't die on this death machine. And, by the way, it looks way weirder than a simple hug.

Get out there, be safe, have fun, make our lives easy when you can, and don't forget to buy gummi bears. 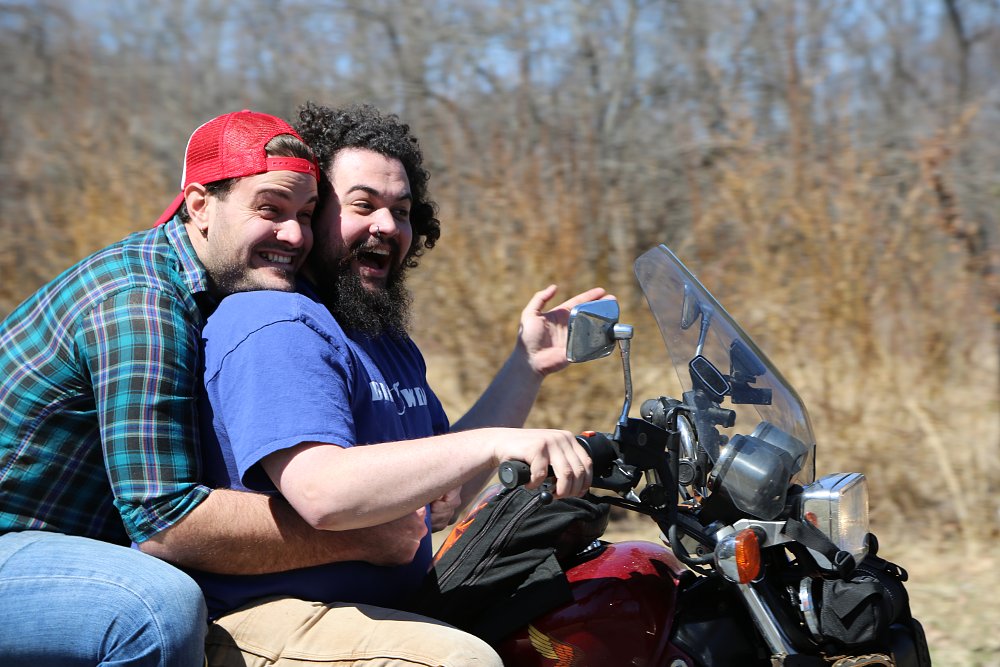 uberMOTO is a thing now Lemmy