How to charge a motorcycle battery

If you’re reading this article, your bike ain’t starting, and you can’t take a ride for at least a few hours and that makes me sad for you. Hopefully, we can get you up and running quickly, though. Charging a motorcycle battery is not hard, but there are some things you can do to make sure you are successful. Let’s get to work!

How to charge a battery

Small batteries, like the one in your motorcycle, do not take kindly to being discharged. They really don’t like being discharged and left that way for a period of time. Sometimes batteries can be brought back from the dead, but even when salvageable, permanent and irreparable damage has been done by both the discharge and subsequent rapid charging you’re probably going to attempt. Expect to buy a new battery, and if yours can be saved, think of it as serendipity.

Step 2. Figure out what kind of battery you have

Lead acid, absorbed glass mat (AGM), and gel batteries can all be charged in the conventional way. Lithium-based batteries (lith ion, lith-iron, lithium phosphate, etc.) need special chargers depending on manufacturer, which brings us to the next step.

Step 3. Figure out what kind of charger you need

There are a few types of battery chargers. The simplest type is a trickle charger, which converts the AC power coming out of your wall to DC, and blindly pumps it into your battery until it is turned off. Note that this type of charger must be monitored throughout the charging process. That phrase has gone out of vogue somewhat, so you may also see these referred to as "fully manual" chargers.

“Float chargers” are the next type of charger. Modern float chargers get a battery charged and then switch on and off automatically to keep the battery’s charge rate at the optimal charge level. (If you don’t have and use one of these, it’s probably a big part of why your battery is dead. A Battery Tender Junior is far cheaper than a new battery in most cases. Just sayin’.)

The final type of charger is a smart charger, which monitors the battery’s charge progress. Normally, it will charge at different rates in order to minimize the damage done to the battery. Often these have what’s known as a “desulfation” mode, which is usually used to knock sulfur off the lead plates inside the battery. It usually does this with varying voltages and electrical “pulses.”

Many times those smart chargers cannot be used with lithium batteries. The problem is that chemically, lithium batteries are different from their lead counterparts, and most have an on-board management system that cannot cope with the pulsing. Look to your battery manufacturer for guidance with this style battery, as not all brands can be treated the same.

All of these chargers are available in varying degrees of charging amperages. Charging at a higher amperage is faster, but more stressful for the battery and ultimately bad for its future longevity.

Also note that many types of chargers have circuitry built in to keep the charger from applying current to an object that is not a battery, so if a battery is really low on juice, a float or smart charger may not charge the battery. In these instances, it can help to begin a charge with a standard “dumb” charger until the battery voltage is high enough for a float charger to “see” the battery voltage. Note that two chargers should never be connected at the same time. While most people are best served by a float charger to prevent something from happening to a battery beforehand, trickle chargers still have a place in the motorcycle world.

It’s a pain to pull a battery out of a bike. You’ll see plenty of people hook up a battery charger with the battery in the bike, but I caution against it for a few reasons.

First, by removing the battery, you isolate your electrical system. A bad battery is a minor problem. A blown fuse, melted wiring harness, or fried ECU is not. One good electrical spike is all it takes to make that a reality. If the battery is out of the bike, it’s unaffected by blips on the electrical grid.

Removing the battery is also a good idea because the temperature of a battery changes when being charged. A chemical reaction occurs inside the battery, and that reaction is exothermic — it gives off heat! The solution inside a battery can even boil and melt battery cases in extreme circumstances. The acid that bubbles out will wreak havoc on paint, metal, and rubber — nearly anything on a motorcycle can be damaged badly by sulfuric acid. If the battery is out of the bike and contained in a tray, your bike will stay nice even if the battery totally melts down during the charge process.

If you are considering that float charger we talked about earlier, that’s a different situation. The amount of electricity required to maintain a battery is much lower than the amount required to charge it when it’s kaput. In these instances, using the charging lead for your float charger while it’s in the bike is perfectly fine.

If you aren’t sure how to remove your battery, we’ve got an article on that to help you do it safely.

If your bike is in the garage, take it outside or ventilate your work area. Charging a battery gives off hydrogen gas, which is super-flammable. Overcharging, should it happen, will produce hydrogen sulfide, which is super-bad-for-you.

Next, attach the charger to the terminals. The order is unimportant. Triple-check that they are hooked up correctly! Some new chargers can “tell” when it’s been attached incorrectly, but a good many cannot. If you plug the charger in with it hooked up to the incorrect terminals, you are going to break things. Make sure the charger leads are firmly attached to the battery. If the electricity can “arc” between the terminal and a flopping lead, the arcs can damage the terminal and the leads. (They’ll look like they have welding spatter on them.)

If it’s still “bad,” don’t be tempted to pop-start the bike and run it. That worked fine 40 years ago, but modern bikes have fuel pumps, injectors, computers, sensors… all sorts of delicate electrical equipment. Trying to run them with a bad battery puts them at risk of damage, beats up your charging system, and puts you at risk of a breakdown who-knows-where. And if you thought a new battery was pricy, see what your mechanic charges to replace your stator and voltage rectifier.

Once your charger says you’re good to go, unplug the charger. Reinstall the battery and secure the hold-downs. Then attach the positive cable, and after that, the negative. (Remember, the order is important!) If you read our article on removal, you probably caught the reinstallation section, too, but if you’re uncertain on the proper procedure and sequence, we got you covered in that other piece.)

Step 7. Find out what went wrong

If your bike just sat in the shed for the winter, the charging system is probably fine. Same deal if you had a seven-year-old battery in your bike. But if you have a fairly fresh battery and you were riding your bike and that battery just up and died, you may have a charging system problem or a parasitic draw. Fix the root cause, not just the symptom.

That should do it for most of you! If you have any questions, drop us a comment or make friends with your local motorcycle mechanic. 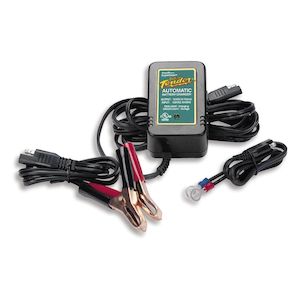 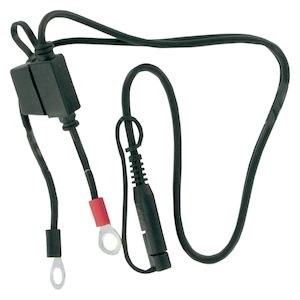 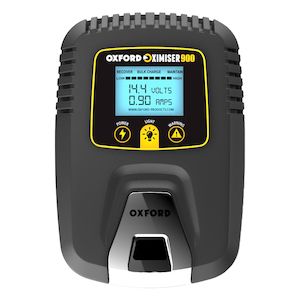