How Royal Enfield plans to become a major player worldwide

Can Royal Enfield become the biggest middleweight motorcycle manufacturer in the world? The company's CEO says that's their niche and their goal, and the U.S. market is part of the plan.

“There’s a big opportunity here, a space for middle-grade motorcycles in American cities, and people are not serving that market correctly. We think that we can spur the urban market for youngsters,” says Siddhartha Lal, CEO of Royal Enfield at the grand opening of their American flagship showroom in Milwaukee.

Siddhartha traveled from his home in Delhi, India to celebrate the opening and get some initial American impressions of the Himalayan, a 410 cc single-cylinder ADV bike specifically designed for riding in the Himalayas.

“My first long ride in the Himalayas was in 2010 and we got stuck in a small village due to a flash flood. While we could not complete the trip, our single biggest insight was that the best motorcycle for the Himalayas is not one that tries to dominate its landscape, but one that is able to go with its flow,” he recalls.

Going with the flow is a recurring theme with Siddhartha. “I want to bring motorcycling back to the '60s and '70s when it was not as much about the specification of the motorcycle," he says. "It was all about just letting loose and having a great time. It was more about the ride than about the product."

“Motorcycles over the decades have became bigger, heavier, more expensive and in a lot of cases, more electronic, more fragile and more distant from the consumer — they’re not simple mechanical products. They’ve become a black box that you can’t decipher,” he says.

“That’s the idea that we want to propagate in the U.S. You don’t need to get a huge motorcycle to enjoy yourself. You can enjoy yourself a lot more on a fun, simple motorcycle that is really accessible from a price point of view, from a spare part point of view, and from a running cost point of view. If you break a part, you can just replace it. It’s not going to cost you an arm and a leg. To bring that simplicity and fun back into motorcycling, that’s our vision.”

His vision makes sense. What city rider wouldn’t love an affordable, simple bike that is fun to ride? But can he deliver? Selling motorcycles is one thing, but providing service and parts for the lifetime of those vehicles presents a different challenge. Siddhartha is taking the long view and doesn't expect the company to make a lot of money in the United States, but having a presence here is good for the brand's image.

The open question is whether the new Himalayan will come to the U.S. market. Siddhartha said that Royal Enfield has not decided for certain if the bike will indeed be brought here. If it is imported and the price is around the rumored level of $4,500, it would have little to no direct competition, at 410 ccs and with a rugged ADV aesthetic.

“It doesn’t have a tremendous top speed, it’s not a high-grade motorcycle, but it’s a really fun, practical motorcycle, and because it’s been made for the serious intent of traversing the Himalayas, the chassis is extremely capable. It’s exceptionally capable, it’s extremely rugged,” he claims. The bike runs on standard octane fuel (high octane can be hard to find in India) and has limited electronics. Siddhartha says the bike can easily be push started, and that even with the battery removed the headlight will still work.

There are only two Himalayan bikes in the United States. I spent some time riding one around in downtown Milwaukee. It appears rugged and simple, and rides the same. It feels like you expect a single to feel — competent but good-natured. The bike carries its 410 pounds low in the frame and feels confident and grounded. Overall comfort was good, and I could imagine putting many more miles on it. The 31-inch seat height will make it accessible to shorter riders, but at six feet, one inch tall, I found it a bit cramped, something I’m sure they will consider if or when they introduce it in this market.

About 98 percent of Royal Enfield's motorcycle sales are in India. So they brought in Harley-Davidson veteran Rod Copes to run North American operations.

“This is a key market,” Rod says. “Having a great presence here means a lot in China, in India, and the rest of the world. We don’t see any reason why we can’t be a cool and exciting brand for the millennial generation. It’s a combination of having fun, affordability, and just being simple and easy.”

But, how do you sell bikes to millennials with a very limited dealer network?

“We know that because of the price point that we offer, even at a really good dealer margin, it’s going to be hard to financially justify an exclusive Royal Enfield facility in all metro areas," says Rod. So, to begin with, they are targeting existing dealers who carry multiple brands.

"In some cases, we’ve found individuals that don’t have a dealership, but they have an ancillary business that fits with our brand. It could be a coffee shop. We’re experimenting with that,” says Rod.

Grab a latte, some selvage denim, and a mid-grade adventure bike? I’m not so sure. The Royal Enfield lineup of bikes seems so boldly out-of-place in the States. Buying a new bike from a barista? Still not sure. But the Himalayan? A model built with specific intent, a practical riding posture, 8.5 inches of ground clearance, and luggage racks for potentially half the cost of a Ducati Scrambler Sixty2? That sounds interesting. 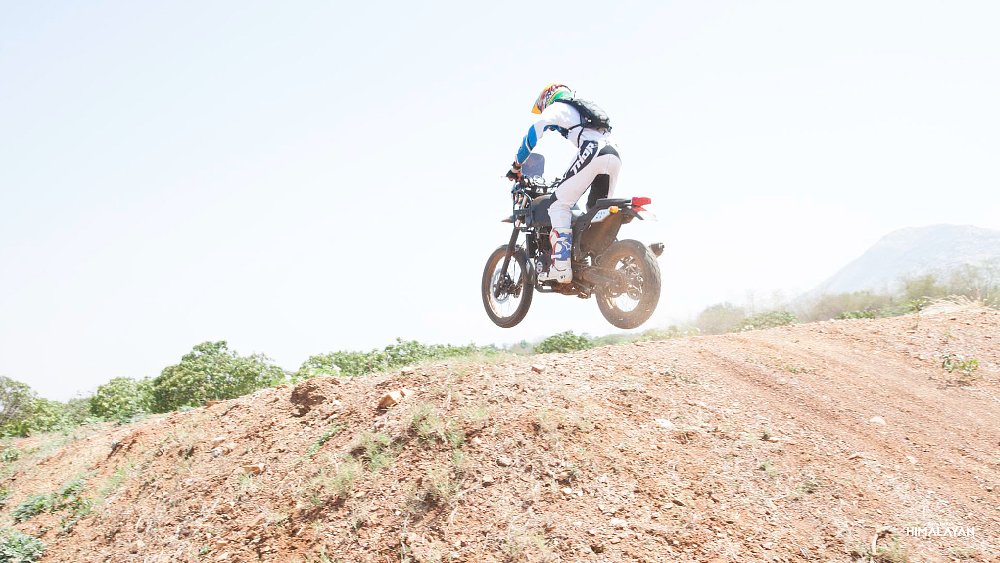