How not to learn flat track

I’m wearing a fluorescent safety vest standing inside the mile-long dirt track at Remington Park, Oklahoma. Thousands of fans have come out to watch the OKC Mile, an American Flat Track race. But right now, instead of watching racing, they’re staring down at me, wondering why some idiot with a camera in one hand and a beer in another is wandering across the track.

The reason? Indian Motorcycles is sponsoring the race tonight and gave me an all-access pass and set me loose. Antics happen.

Flags drop and motorcycles launch down the track. I’m vaguely trying to analyze the race. It’s long. It’s fast. There’s a lot of dirt flying. The track, typically reserved for expensive thoroughbreds, has been carefully groomed and watered for the racers. I can’t tell what good it's doing. It appears to just get destroyed every lap.

The racers plunge into corner one, their right arms yanking on the handlebar. Front tires cock out-of-place like broken necks. Bikes cut violently into the turn. Left feet drop to the dirt and sparks fly from metal “hot shoe” slippers. Dense chunks of red earth fly from the track and into my face. It’s awesome.

The speed is so close it falsely gives me the sense that I’m in on the ride. That, somehow, through the magic of spark, gasoline and my keen sense of observation, I’ve absorbed the gift of going fast. It’s the same misleading feeling you get after watching a night of kung-fu movies — by watching all those fists and feet fly, you too can now kick ass.

The Indian Wrecking Crew, the team I’ve been “shadowing,” sweeps the races. We celebrate in the pits. I foolishly allow myself to share in their victory — as if my standing on the sidelines, jaw dropped, beer in hand, somehow helped. The party goes late into the night and continues in the hotel lobby.

Early the next morning, I arrive at Red Dirt Raceway, a quarter-mile clay oval about an hour from Remington. I’m groggy, my head is pounding. I suddenly wonder just what the hell I’ve got myself into. I’m staring at a muddy clay track and a Hooligan flat-track bike — two things I’ve never touched before. And what’s staring back at me? Two professional flat-track racers. And not any two, but two of the fastest racers in the world: Brad Baker and Bryan Smith.

They give me the same look as a dog given a slice of banana: a mix of mild curiosity and indifference. In theory, the pros have been tasked with giving me some lessons on racing flat track. But, when Brad realizes my total lack of experience, the only advice he gives me is, “Don’t put your foot down, you’ll end up kicking the back of your head.” (The track is really sticky.)

I ask about shifting.

Okay... how about brakes?

“Probably better you don’t brake either.”

The two pros, their team of expert tuners and support crew stand along with the Indian execs waiting for me to gear up. I’m with a small group of other journalists and realize my second mistake (the first being agreeing to do this.) For gear, I’ve brought jeans and a jersey because I’m a genius — everyone else pulls on full leathers. Shit.

It’s been pouring rain, and despite every effort by the excellent track maintenance crew, everything has turned to a gooey red mud. It’s massively sticky and deep ruts have formed everywhere, even in the parking lot. The first journo up, the guy with, in theory, the most experience, dumps the Hooligan bike before even leaving the parking lot. I pretend to be choking on my breakfast taco (yes, they served us tacos) and not actually gasping. I like the guy, but kind of hope the bike bursts into a ball of fire and the event is canceled. No such luck. He rides his laps with finesse.

It’s now my turn. The bike is an Indian Scout modified by Roland Sands, a bike I’m familiar with and really like — on the street. Getting this thing on the dirt feels entirely different. The pegs are offset to allow for better clearance and it’s disorienting. It’s been set up with GP shift (one up, five down). Oh, and there’s no front brake. But, they tell me it’s basically normal, except for the way you put your feet on the bike, the way you shift, the way you brake, and that there’s no pavement.

I throw a leg over and figure out how to get into second gear. I flail my legs around until I find the pegs and wobble off. Everything feels off. The back end kicks out and links back up at unexpected times. The bike doesn’t lean. (Yes, I blame the bike.) I’m gripping the hell out of the bars and I’m not even out of the parking lot. My suspicions are confirmed: I suck at this.

I imagine this is what riding a bronco is like. You never know what is going to happen. After a dozen laps, I start to get a feel for the track. Someone mentions trying to sit more on the outside of the bike, slightly up on the tank. I try it. I still suck. The bike, which on the street feels light and almost tiny, feels massive in this environment. I imagine for a moment what racing must be like with a dozen other riders aiming these heavy bikes at you. I get nervous. My dreams of becoming a Hooligan hero disappear. I realize the professionals are paid to do this for a reason — they’re really, really, really fast.

And then the unexpected happens. No, I don’t find my inner speed. My technique, or lack thereof, does not improve. The onlookers take no interest in watching my parade laps. Even the photographer leaves.

What does happen is I start having fun. I get more comfortable on the bike. And a flood of experience comes rushing back to me. I think to myself, “Hey, I’ve done tons of stupid shit on a bike!” I roll on the throttle, I stab brakes, I try to put a foot down and nearly dump the bike. I take turns too wide, too late. I come in too tight and exit too wide. But, I have a ton of fun.

What did I learn? Well, really nothing more than what I already knew: It’s fun as hell to do stupid things on other people’s motorcycles.

Dopes in the dirt: Exclusive post-race interviews with Dashing and Dirtbag TeamZilla 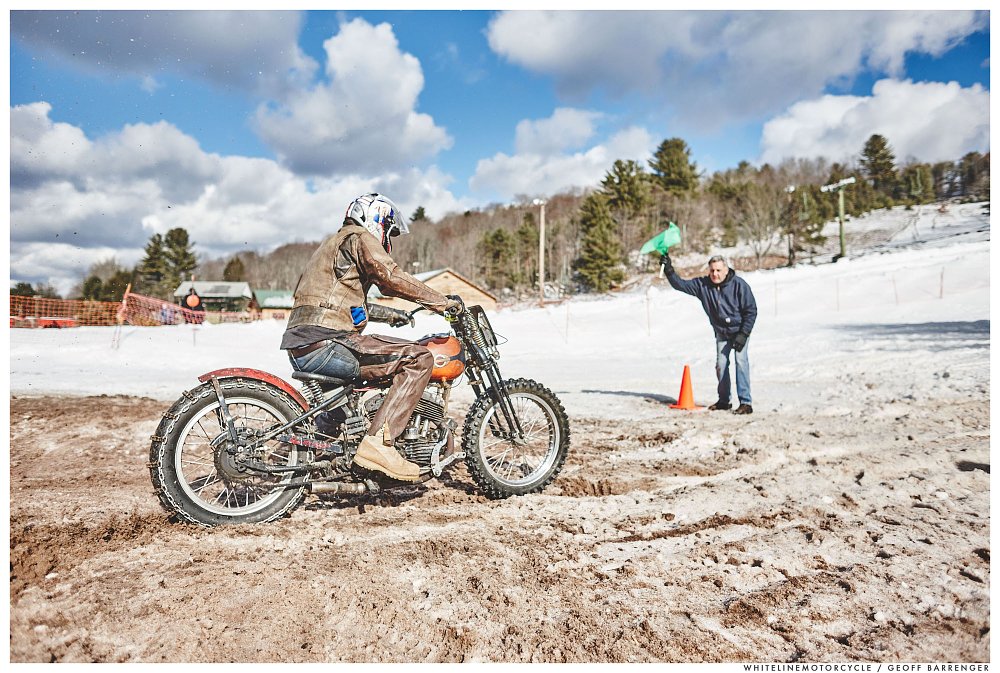