How I went from reluctant scooterist to passionate, lifelong motorcyclist

I wish I could go back in time to meet my 10-year-old self. It would be so awesome to tell her what she would be doing when she grows up. She wouldn’t believe me, either.

“You ride motorcycles? Alone? Does Mom know? No way!”

As a young girl in a very traditional household, my life goals were to grow up, get a job, get married and raise a family. Motorcycles were on TV and in movies, totally off limits and nowhere on my radar.

Perhaps I should’ve taken it as an omen when my older brother bought a Honda Elite 150 scooter in high school and shuttled me to my friend’s house across town one day. I was terrified but secretly loved it. I remember him turning left at a stop light and thinking to myself, “I’m having so much fun, but I’m so scared.” But as a little girl, I just wrote that off as a fantasy. Who knew that this was the start of a snowball effect that would take over later in life as I began exploring a motorized life on two wheels.

Riding was never, ever in my future as far as I was concerned. That was for rebels, courageous people, women with big ovaries. Not this short, shrimpy woman who grew up as a clumsy little girl walking down the street (now I’m just a clumsy adult). Yet here I am, all grown up, riding motorcycles (often alone, without my husband) and loving every minute of it. I never plan to stop until my arthritic body screams for mercy. You’ll have to pry the handgrips from my cold, dead hands!

So how did I go from that first scooter ride to becoming a passionate motorcyclist? Well, it starts with marrying my college sweetheart. He then planted the seed for buying a scooter, because when you start out your newly married life in San Francisco (or almost any big city), it’s the best form of transportation: high gas mileage, useful storage, easy to ride, easy to park and ridiculously affordable. And that’s what it was, transportation. Nothing more.

But even riding a scooter wasn’t the easiest for me.

We bought a 2003 Aprilia Scarabeo 50 cc Ditech. It was lightweight but also tall (30-inch seat height), so I didn’t take to it very quickly. I was the reluctant scooterist. I had to warm up to the idea and force myself to take it beyond our driveway. I also dropped her a couple times and didn’t think I’d ever learn how to ride it alone.

I don't know if it was my husband’s absence on a business trip that forced me to conquer this fear, but somehow I knew I wanted to ride it even more. Never before had I experienced an awakening, so to speak, where I realized how capable I was. It didn’t even occur to me that I might be undersized with a short (about 28-inch) inseam. I began riding it to work every day on my 4.5-mile commute downtown. No more bus rides! I also used it to run errands everywhere, since parking and getting around city streets were more efficient and less time-consuming. The self-confidence I gained really changed me without me knowing it.

My scooter taught me what it would be like to be on a motorcycle: how to navigate city traffic without the safety of a roll cage, airbags and seat belts; and more importantly, how to scan for potential hazards. Looking back, it was incredibly liberating to feel comfortable without worrying about shifting or stalling. (If you remember your first days learning, you probably remember that shifting anxiety). I think half the battle when you’re first starting out is getting used to a completely different environment, so far away from your comfort zone you feel like you're on another planet.

A year later, my husband had to buy a motorcycle because I had the scooter all the time. Don’t feel bad for him. He worked from home and had no commute, so why did he need a scooter anyway? I was the one riding to work every day!

He wanted his own bike and decided he was ready for a Kawasaki Ninja 250. So that was the plan: He rides a motorcycle and I ride a scooter. It was a very short-lived plan.

A month later, I started riding the Ninja to work every day instead of the scooter. I can’t explain it. For some reason I felt the need to conquer my fear of riding it, as well. I think deep down I really wanted to ride and I knew that I had to do everything in my power to make it happen. Even though I took a motorcycle safety course before switching to the Ninja, I still felt uneasy. The Ninja was taller, heavier, more ornery than the mild-mannered scooter. I thought to myself, “I can’t ride this.” But apparently I could, and I did, for 11,000 more miles and two more years. (Don’t worry. He bought himself a different motorcycle soon after I “stole” the Ninja.)

We rode from San Francisco to Los Angeles at least twice and I spent a couple of years gaining self-confidence and learning what I could do and couldn’t do. That made a huge difference when I moved up the ladder to a heavier, taller bike. I was confident I could handle it.

Who knew a scooter could teach you so many things about motorcycles? And who knew that a simple little 50 cc scooter bought purely for practical reasons would put me on a road that led to thousands of miles of riding, including the Tail of the Dragon on a Triumph Street Triple that a younger me would never have dreamed was possible?

I think more riders should start on something simple, because everything you learn will translate to the biggest, baddest motorcycle you want to ride. It’s just a question of continuing to learn.

A scooter was a gateway drug for me to the addicting world of motorcycles. What was yours? 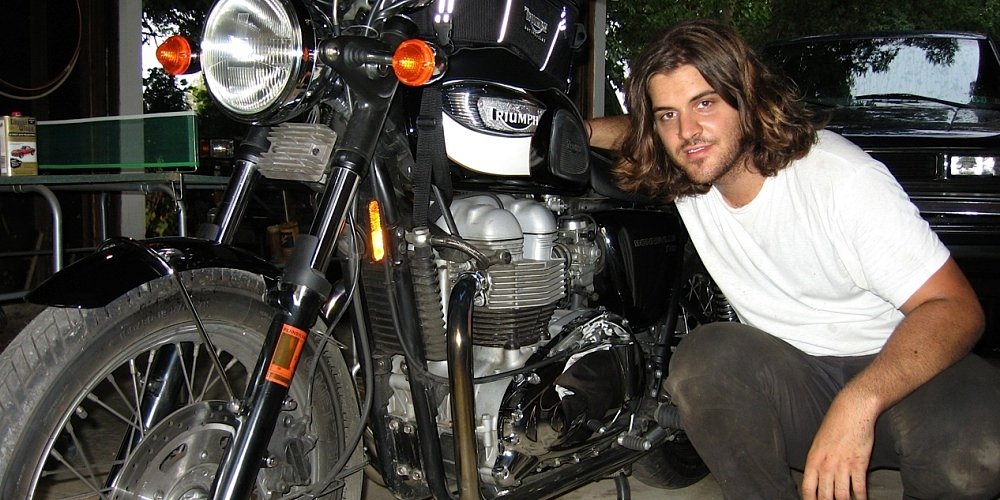