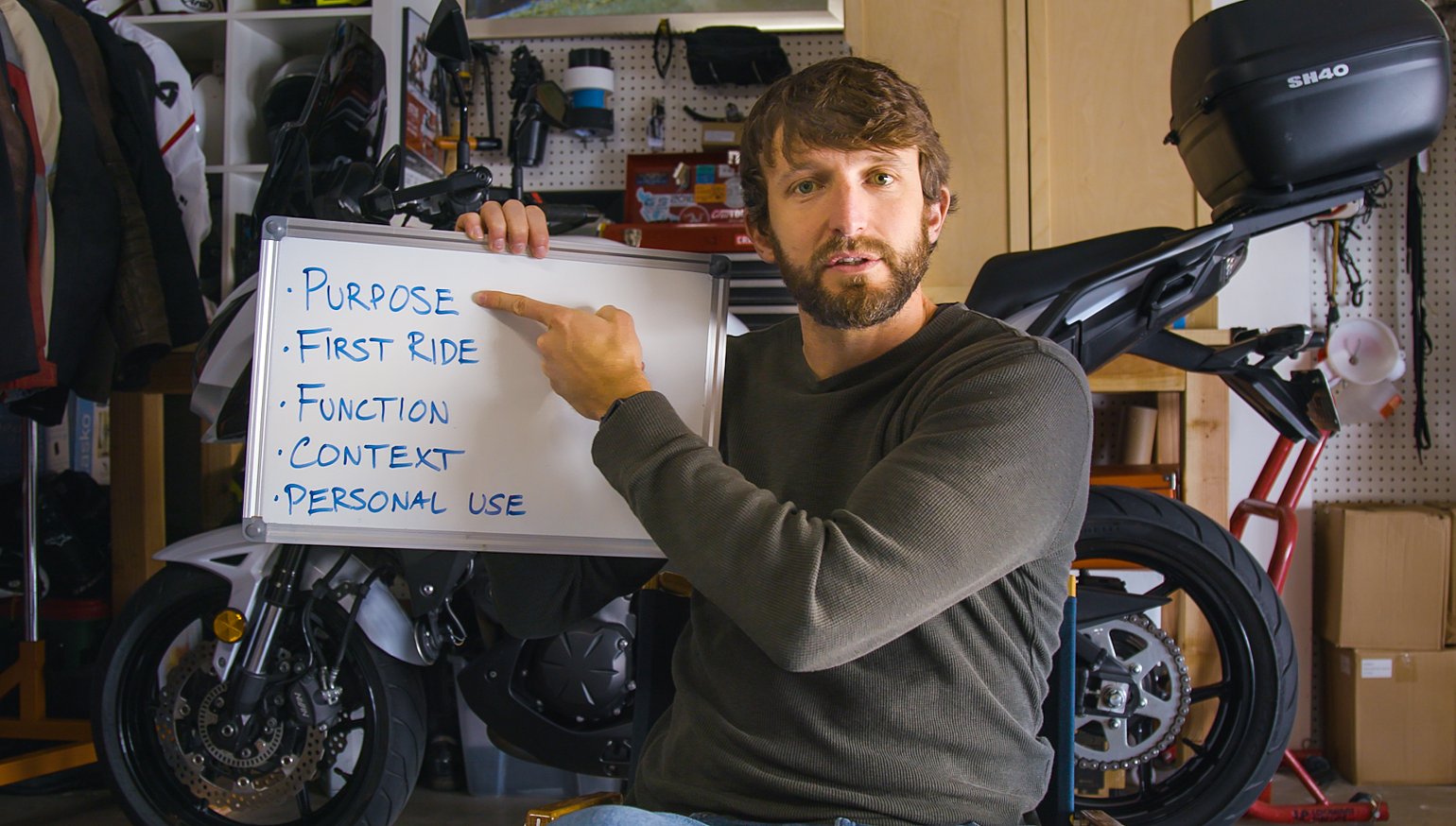 Five things to consider when choosing a motorcycle

Being trapped at home in this, one of the most reclusive spring seasons in history, has affected us all a little differently. I am learning how much I miss racing on TV, a few strokes of the piano, and that I like to talk about motorcycles in general quite a bit more than my significant other does. Some of you reading this can probably relate.

Phone calls to my dad have become more frequent as a result, a fun silver lining, and I’ve also been thinking more about the questions I get most often about motorbikes. Having made a number of videos in which I review new machines, other motorcyclists often ask which bike they should get for themselves.

I wish I could make a video about every single option, but that would be a huge challenge in the best of times and we can probably all agree that “the times” are not the best. Instead, I did the next best thing and made a video breaking down the steps I go through to try to understand and evaluate a motorcycle. Maybe understanding the process I use will help you when you're choosing your next motorcycle. If you need to justify watching it on work time, tell your boss it’s an, uhhh, "educational journal article on the fundamentals of making good long-term purchasing decisions," or something vague and businesslike.

What to look for when choosing a motorcycle

Understanding a motorcycle’s intended purpose, and what it’s supposed to be good at, is essential. You probably wouldn’t buy a Harley-Davidson Sportster as a dual-sport machine, and that’s in part because it wasn’t made to go off road. Manufacturers design bikes with certain tasks in mind, and certain compromises made — wrapping my head around that is the first step to evaluating a machine.

Keep in mind that reading up on a bike isn’t always straightforward. Maybe Kayamazuki presented the new XYZ-1200R as the “ultimate sporting machine” but hold the phone, it says the seat height went down half an inch, it lost horsepower, the mirrors are set wider, and the fuel range is longer. To me, that means the brass over at Kayamazuki know that more comfort is actually what the buyer wants, even if the marketing is all lightning bolts and motion blur. Be critical. Read between the lines.

This process begins before I even have a chance to start the engine or actually ride the bike. Sometimes bikes look different in person, whether they’re larger or smaller, or the color of the paint is more or less appealing. We can all assess build quality a lot better just by inspecting a bike in person, too, than we can in brochure photos. Just walking around a bike or swinging a leg over it on a showroom floor is a good snapshot of my first impression.

If and when I have a chance to ride the bike, the first minute or two are often the most impactful. It’s very common to ride for a few miles or less before I stop, take out my phone, and start taking notes on all of the first feelings I’ve noticed on the bike. It’s a fine balance of trusting the things that stand out without condemning the machine for things that should affect a rating. If it feels narrow right away, that’s notable; if the shift lever is too low, that’s not a valid complaint. There’s only one chance for a first impression, as the saying goes, and that’s definitely true for testing a motorcycle.

This is the real meat and potatoes of evaluating a bike, because this means living with it. Sharing a bathroom, having arguments, and, errr, meeting the parents. The analogy is falling apart, but you get it. This is testing all of my instincts from the first impression or first ride. If a bike needs fuel every 110 miles, that can get old fast. Maybe the transmission felt good at first but now there just always seems to be a false neutral between fifth and sixth gears. The shape of the headlight is totally bitchin’, but at night on a twisty road it could be practically useless.

All or most of these things are either impossible to test during a quick first impression, or they’re not noticeable until you spend many hundreds, or even thousands, of miles aboard the bike. I try to spend as much time as possible on a bike before I claim to understand it.

In 2014, I did a long-term test of the first-generation KTM Super Duke R. I spent around 10,000 miles on that bike — I put saddlebags on it, I took it to a track day, I changed the muffler, the tires, the oil, I rode with passengers, I did wheelies, I even tried to install a more powerful horn — and in doing so I felt very familiar with that machine by the time it left the garage. If that had been the only motorcycle in that class that I had ridden, I would have easily thought that it was the best of the group. All of the data and experience in my head would be hanging in a vacuum, with no other data points to compare.

I needed to ride every other bike in the class, really, before I felt comfortable evaluating that Super Duke, and the same goes for any other bike. To that end, a back-to-back comparison is without doubt the most potent. I can’t overstate how valuable it is to ride a bike, stop on the side of the road, and get directly onto that bike’s competitor. Even a lunch break can dilute the impression. I understand that not everyone has that luxury (I often don’t, either), but if you can ride a bike the next day or even the next week it will really help contextualize the things you notice and care about on a motorcycle. Even just sitting on bikes back to back at a show or dealership can offer you a lot of food for thought.

This is the most important piece of the whole dang puzzle, frankly. I’ve spent a lot of time evaluating bikes and I always make it my goal to provide information that will help inform others, but aside from horsepower, weight, and fuel capacity, in the end it’s all my opinion. I like to think that I have some amount of perspective that most people don’t, so if I tell you a seat is comfortable or a transmission sucks it isn’t totally baseless. However, even those impressions have to be weighed against what you care about. I can tell you one bike has more wind protection or more horsepower than another one, but what I cannot tell you is how much wind protection or horsepower you need or want.

For example, if I were to review that Harley Sportster I mentioned earlier, I might say the suspension travel and fuel range are short, so therefore I wouldn’t recommend riding it off-road. I might have said, “No way would I take it on a trail. I’d get the Kayamazuki instead.” But for all I know, you just joined an “American V-Twin Adventure” group. That being the case, to hell with my opinion because you’re going to get yourself some long shocks and a jerry can, and hit the trail with your new AVT-ADV buddies (a dollar in the swear jar for every person who puts the phrase “Pan America” in the comments). And you’re probably going to have a blast.

If you take one thing from this article and video, let it be this: You need to be thoughtful and critical of your own wants and needs, because you are the only one who can truly answer the important questions. Evaluate safely, my friends. 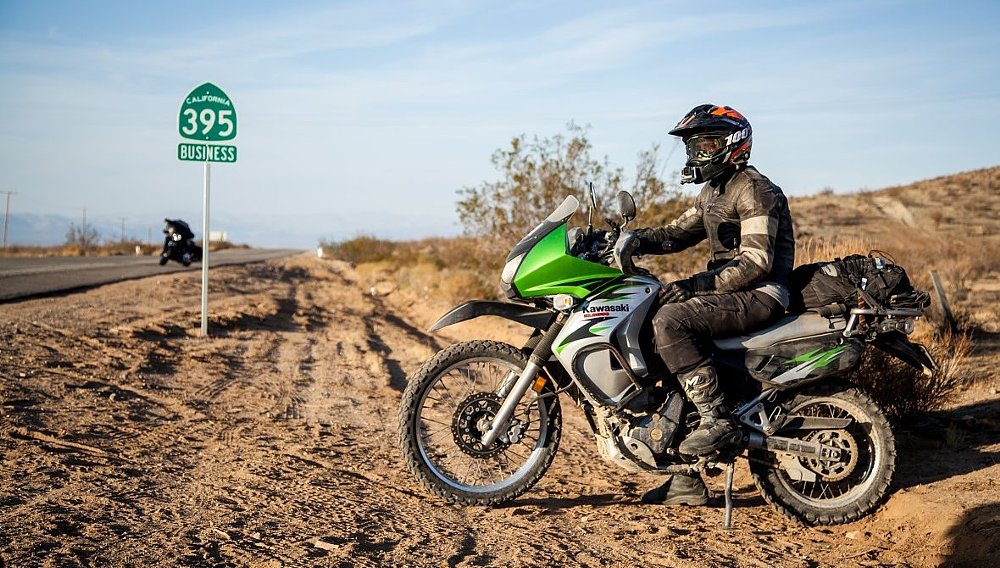 How to choose your second motorcycle Lemmy