Five reasons you should build a motorcycle

The more specialized a tool needs to be, the harder it is to find commercially.

The word "custom" gets tossed around too lightly, but if you do find something truly custom, specialized to meet one person's needs and tastes, it also tends to be expensive. (Unless you’re "Having it your way." Apparently custom burgers are easy.)

Motorcycles are infinitely tailor-able. Putting your own scooter together is a good way to keep your budget in line and still get a better-than-factory sled. The tradeoff? Just time, labor, and a more reasonable amount of money. There’s nothing wrong with riding a stock motorcycle, or modifying a factory-built bike, no sir. But if you want a truly custom machine at a price normal humans can swallow, you’ve only got one choice: Do it yourself.

Here are five reasons why it's a good idea.

I mean, you’re going to learn a lot. How an engine works. How a transmission is put together. What a magneto does. Where fairings always seem to crack. And that’s not the end of it. If you’re contemplative, you’ll understand why your favorite manufacturer chose to build some things a certain way. You’ll see OEM improvements that were stolen from the aftermarket, and see what aftermarket parts are better than stock, and which ones are worse. You’ll learn what parts interchange from what years on your bike, and by becoming intimately familiar with them, you’ll reap the benefits of picking up parts for a song, because their sellers may not be able to identify them.

You can build something that wasn’t available from the factory

Have you ever heard of a Chout or a Triton? Ever seen a Bimota or see a GSX-R front end on an SV650? That stuff only happens when someone gets off his ass and builds a bike. Bimota’s entire existence hinges on mixing the best OEM and aftermarket bits into bikes that everyone wants. The problem is they cost a snotload of money. Solution? Build your own.

Purchasing aftermarket and specialty parts is easier to justify when you are building a bike from scratch because you’re not replacing a still-functioning item. It’s possible to create a motorcycle entirely from aftermarket or custom pieces, avoiding some of the design flaws that can be present in OEM parts and designs. When designed and built carefully, a completely non-stock bike might be superior to factory offerings.

The same holds true for building just plain weird stuff. Molded frames, looooong forks, and sport bike front ends on cruisers can’t be bought at your local dealer. If you want something like this, someone is going to have to put it together.

Similarly, if you're interested in designs of yesteryear, there's usually no avenue to purchase new — and in some cases, even buying used isn't an option. Assembling parts into functioning motorcycles is the gearhead's equivalent of recycling.

You can do it on the cheap

Now, you can spend a load of money doing this, if you want. You can also do it on the cheap. If you do your homework and know what parts are usable, it’s possible to save a lot of money. Mario, one of our Gear Geek Team Leads, assembled his CBR from eBay parts in a storage locker. One of the other realities of building a bike is that you can buy it piecemeal. You don’t have to run out and buy all the parts at once. The only way to do that with a whole bike is to buy it on credit.

You can make it easy to own

If you want a bike that’s easy to care for, you can build it that way! First, you can elect to convert parts to ones that are less expensive or more commonly available. For instance, lots of people are building customs based on Suzuki Savages, and GS550 sprockets swap easily onto the thumper. Replacing a chain is a hell of a lot easier than replacing a belt.

It’s possible — and often desirable — to use “standard” aftermarket items that are easily found, to minimize motorcycle downtime. Another example: S&S Super B and E carburetors have used the same jets in all models for decades. Any reputable bike shop has a box of them under the counter. You can also build the bike and modify parts to make service and repair simpler. Factory bikes are made to meet a price point and performance specs. Ease of wrenching is usually lower on the priority list with factory engineers.

You can rely on your machine

It’s easy to roll down the road knowing that every single piece on your bike not only met your approval, but may have even been hand-built, assembled and modified by the person who’s most interested in looking out for your welfare, happiness, and safety. Is an hourly worker on an assembly line as interested in the performance of your machine as you are? There’s a world of difference between going on a ride and wondering what part of your bike could fail next as opposed to being content you adjusted your valves a little loose to ensure they live long, happy lives. Plus, if anything does go wrong, you're likely to understand how to fix it if you built it in the first place.

Look, building a bike can be as easy or hard as you want it to be. It’s not for everyone, but if you’ve ever wondered if you could do it, here's a brief motivational speech: You probably can. For many riders, the money, time, and effort add up to chump change compared to having a bike that’s truly one of a kind. 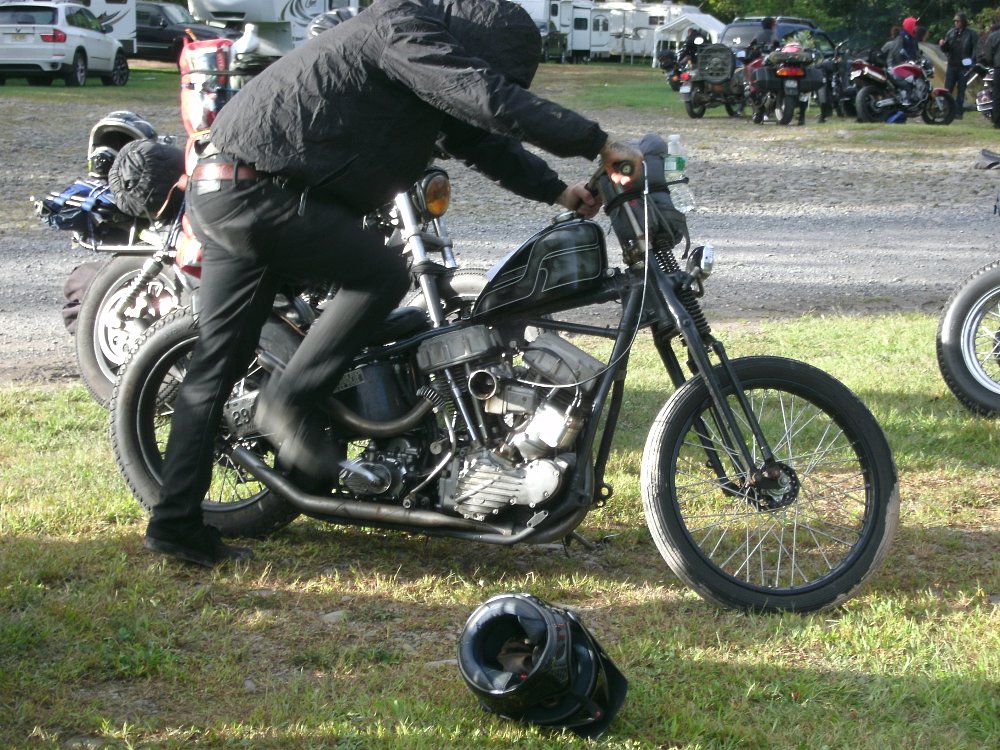 Moto-linguistics, or how to speak chopper proper Lemmy