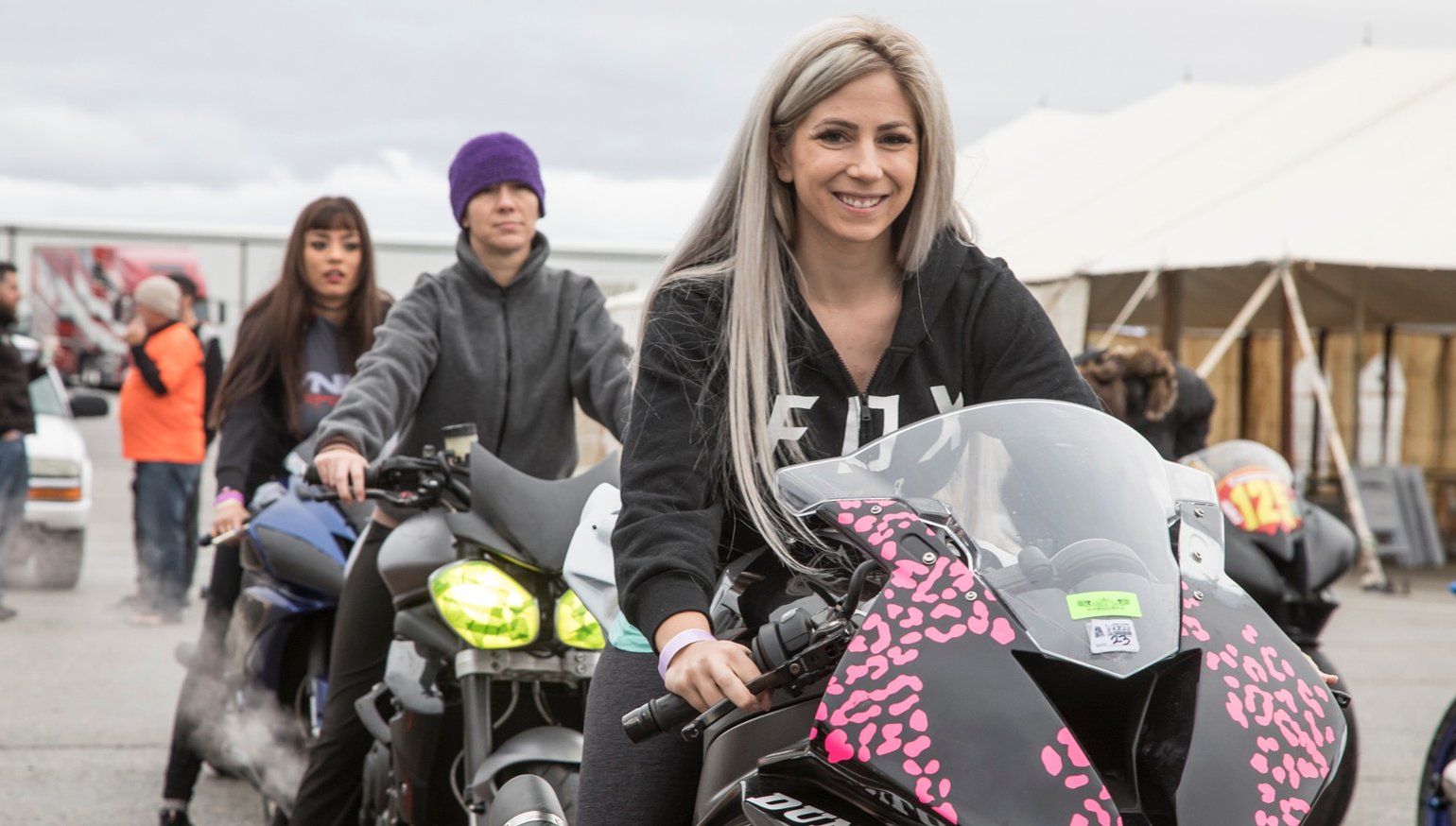 Femmewalla: The one day a year when women rule the track

The alarm goes off at 3 a.m. and I stumble in the dark to find the light switch. It’s time to load up the ZX-6R I have on extended loan from Kawasaki and my riding gear into the bed of my boyfriend’s truck, and the two of us and our dog into the cab. We have a three-hour drive ahead of us, and it is dark as pitch outside. I’m exhausted already, and the day has barely begun.

We make our way out of the greater Los Angeles sprawl and delve into the vast darkness of the unspoiled desert. Our destination? The moto oasis of Chuckwalla Valley Raceway for the all-women’s track day that is Femmewalla.

After the tedious task of wading through traffic (even at that ungodly hour) and counting down the miles, we roll through the gates at Chuckwalla just as the sun is peeking over the mountainous horizon. I’m nervous. This isn’t my first time to Femmewalla (that was back in 2015), and it’s certainly not my first time riding at Chuckwalla. But it’s my first time back since getting my racing license almost two years ago. My first time back on the track. It’s like seeing an old friend that you’ve unintentionally lost touch with.

Once I get my pit area set up, I make my way to the building where the safety meeting will be held. I start recognizing faces, and my nervousness begins to lessen. Jennifer Bauer, a friend and fellow racer, says hello with a hug. I recognize Robin, whom I met on the Sisters Centennial Ride, though seeing her at a race track feels unfamiliar. The last time I saw her, she was riding her Harley-Davidson with myself and a small band of other women through Grand Staircase Escalante National Monument. I’m excited to see her motorcycle repertoire expanding!

As it turns out, there are many women attending Femmewalla for the first time, which was somewhat surprising. I assumed it would be a majority of veterans, which technically includes me.

Why a women-only track day

As the ranks of women on two wheels grow, more and more female-focused motorcycle events and riding groups are gaining traction. I’m not just talking scooter squads and cruiser clans, but also dirt bike babes, custom bike builds, and sport bike gatherings. Among those on sport bikes, track days are a popular way to ride fast in a controlled environment, with the added security of safety personnel on site.

Any rider who has attended a track day can attest to the general male dominance of the atmosphere. Historically, women have been scarce at the track. Femmewalla is a different story. This track day is just for the ladies.

As other women have attested, I am similarly grateful for Femmewalla’s exclusivity. There is a unique value in bonding with fellow minority members. Just as most motorcyclists feel camaraderie with their fellow riders, as we’re a minority in the sea of four-wheeled vehicles, the even smaller minority of women on two wheels creates a similar bond.

Women know what it feels like to be the only female in a group of male riders. We know what it feels like to be pressured to keep up with faster riders, looked down upon for encroaching on the unspoken “boys club” boundary, gawked at like some sort of spectacle, or lusted after because, “Oh my god, you’re a woman and you ride a motorcycle?” To be free of all that is a relief.

At Femmewalla, women enjoy the feeling of just being another motorcyclist, like most guys experience any other day at the track. And we can embrace our sport’s aggression and competition on track, and be silly and feminine and supportive of each other back in the pits, if we want. We can be both, and not have to explain our multifaceted selves to anyone. Femmewalla is a female motorcyclist’s Utopia in its own way.

Founded by Chuckwalla Valley Raceway co-owner Aimee Grana, Femmewalla started back in 2011. After a typical co-ed track day, Grana invited her friends Jen Dunstan and Melissa Paris to join her for some testosterone-free track time, and the concept grew from there. Every year since (aside from a hiatus in 2017), Femmewalla has been a gathering place for women of all riding levels to ride with and connect with their fellow female riders on track and in the pits. Men are welcome to attend to support their wives, girlfriends, sisters, and friends. A few women brought their whole families along, complete with little kids in tow.

As with other track days, riders are separated between A (advanced / racer), B (intermediate), and C (beginner) groups, allowing ladies of various skill levels to ride with others riding a similar pace. AMA Champion and FIM World Endurance Champion Jason Pridmore offered two-up rides, while his JP43 Training riders offered one-on-one guidance and instruction on track. Dale Kieffer, of Racers Edge Performance, also offered video training sessions, and Yamaha brought a fleet of demo bikes, including their YZF-R3, MT-07, MT-09, MT-10 and the YZF-R1.

Nikki Riordan was one of the many riders who got to experience being a passenger with Jason Pridmore.

“I kinda have control issues, but Jason is amazing," she said. "I couldn’t believe how helpful it was to just see what lines he was taking.”

While she has only done a few other track days, Riordan spent one season racing with CVMA (Chuckwalla Valley Motorcycle Association), mostly for fun and to improve her riding skills. The ride with Pridmore was a game changer for her. The first session after her two-up ride, she was immediately two seconds faster.

While the focus of Femmewalla has traditionally been track riding on pavement, this was the first year attendees were able to try out Chuckwalla’s new dirt TT course, inspired by Colin Edwards’ Texas Tornado Boot Camp. American Supercamp’s Danny Walker offered coaching and drills, and MotoAmerica racer and MP13 team owner Melissa Paris offered riding tips to a few riders, as well. There were loaner bikes and gear available at no extra charge to any of the ladies who wanted to try flat-track riding.

After riding a few sessions, I wandered through the pits to meet and say hi to more attendees at Femmewalla. I rounded the corner of one area of the pits and found former Moto2 world champion and MotoAmerica Motul Superbike champion Toni Elias chatting with a small crowd. Paris' husband, four-time Superbike champ Josh Hayes made the rounds. Well known racers such as Caroline Olsen and Patricia Fernandez offered some riding and racing advice. The only thing really missing was bravado, and I’m not sure it was terribly missed.

Throughout the day, an overwhelming sense of welcome and generosity permeated the event, with women offering loaner bikes and gear, and offering advice and encouragement.

“I didn’t really know what to expect of the event,” said Robin Korobkin, who arrived by herself from out of state for her first time at Femmewalla. “I just went into it to have fun on a new track, challenge myself, and ride a new bike.”

She said her experience was overwhelmingly positive and she'll be back.

“I found the ladies very open, either to asking for help or giving it," she said. “I felt that all the gals were so excited to just be on the track, and not be intimidated. [There wasn’t any] sizing up regarding what bike you ride or [engine displacement] or even what group you were in.”

The charitable side of Femmewalla

The generous attitudes aren’t limited to the pits. Femmewalla is a charity event, with proceeds going towards the Unforgettables Foundation, which helps bereaved families with burial costs for a deceased child.

This cause is near and dear to the Granas’ hearts as they lost their youngest daughter, Jessie, 10 years ago. They were in the midst of pulling finances together to build Chuckwalla, and had no money to spare for a funeral. The Unforgettables took care of everything for them during such a traumatic time in their lives, and Aimee and Micky have been dedicated to giving back to the foundation ever since. Between the entrance fees for over 90 attendees this year, and hundreds of raffle tickets sold for items like track day gift certificates, helmets, boots, a Yamaha generator, and a custom Mithos-USA riding suit, Femmewalla raised more than $25,000.

As the checkered flag waved for the last session of the day, everyone returned to the pits to pack up gear and bikes, and gather under the giant event tent for the raffle and dinner. Women adorned in unicorn hoodies, hats, and socks were a common sight, as new friends laughed and hugged and long-time friends recounted stories from past track days.

Even with many new riders in attendance, it felt like a giant family reunion: warm, welcoming, and leaving people with big smiles on their faces and their hearts full.

The message is loud and clear: if you are a woman who rides any kind of motorcycle, you are welcome here. That is the magic of Femmewalla.