Embrace the crash: A n00b does L.A.-Barstow-Vegas

A chill breeze floated past my cheek as I looked around, admiring all of the "proper" (as my boyfriend, Justin, would say) dirt bikes. Two-strokes and adventure motorcycles circled the parking lot, mixed with old Triumphs and even scooters, all about to take on the annual L.A.-Barstow-Vegas desert dual-sport ride.

A ping of jealousy hit me briefly when I tried to fire up my cold little Yamaha XT225. I shouldn't complain. My dual-sport has been a reliable companion for the few months I've owned it, handling torrential downpours, thousands of miles of highway, narrow woodland trails, the occasional unforeseen sandy road, and many (many) “off-bike experiences.” Despite all that, I've still only been off-road five, maybe six times. And only two of those times included desert-like terrain. Justin's father, whom we call the Captain, also accompanied us on the LBV ride, and he hadn't even been on a bike for almost 40 years! To say I felt a little unprepared for a 400-mile dual-sport ride among 500 far-more-experienced riders through the desert is a drastic understatement. But to play on dirt means to acknowledge the inevitability of a crash. And one hell of a good time!

Within the first two miles, my motorcycle discarded me while exiting a beach-y hard left. To make the turn, there were many things I could have done, but what I did instead was land on my chest in a foot of sand, while my XT proceeded to use my ankle as its cushion. After immediately killing the engine and moving my knee off the exhaust, I was struggling to pull the bike off of myself when Justin found me. He was eager to help, as always.

There was a once-over on me: fine. Sore, throbbing, but altogether fine. Then, a once-over on my bike: front end tweaked, but an easy fix, so I gave Justin the thumbs up. We had a long day ahead, so I dusted off my ego and we took off!

Exiting Palmdale, the start of the LBV ride was demanding — for a novice. The temperature outside was increasing while my internal temp quickly followed suit. And, though I couldn't feel the sweat pouring out of me, I knew it was there. Blinded by the slate-colored dust clouds that blanketed the path ahead, I became ever more focused (and slightly more concerned). My upper body worked hard to control the whims of my XT225’s mediocre suspension. As soon as I'd change gears and get comfortable, the ground would go loose, swing my front end and, occasionally, make my stomach jump into my throat.

"Just commit to third gear!" I told myself.

It was a simple goal. If you slow down in sand or silt, you're going to get chucked off the bike. When you're hesitant, you tend to slow. So commit! Accept the fact that you may get thrown off the bike. And if you do, it would be because you pursued, not surrendered. I can accept that.

Inner turmoil aside, I was having fun! Dirt clung to my sweat and caked my teeth — evidence that I wore a smile. Or… that I'm a mouth breather?!

Still, the occasional "Shit! You've got this! Stay on the throttle!" slipped out of my mouth as the back end of my bike would do its best to get loose. Our voyage to lunch and the first major checkpoint had no shortage of mishaps. As expected, I took a number of spills, typically in sand. Mostly, I'd tip over (at a stop) like some kind of n00b. Even the Captain had a mild accident on his DR650. Which led me to a sudden stop, and then a crash… of course.

By the time we reached the gas station outside of Johannesburg, I'd become an expert at picking up my XT. After I dismounted, a sensation surged through my Achilles up to my calf and shin. I stumbled, a bit dumbfounded. The acute pain I was experiencing had felt dull during the journey, barely noticeable as I'd shift. But I suppose that was probably due to adrenaline. Hungry and in need of some shade, I hobbled inside. Not knowing the extent of the injury, we had a group discussion and decided to make our way to the paved highway which leads to Barstow. The dirt was done for us that day, but it was all for the sake of riding a much more famous route tomorrow: Barstow to Vegas.

The first mile or so of day two felt like a rocky sandbox.

Early on, I hit a really deep patch of sand and my XT started to slip from under me. Holding on and hoping for the best, I noticed two motorcycles (and their respective owners) parked off to the side. I'm sure they saw me coming. My vessel and I were making quite the scene. And — lucky me — we began to slip and slide briskly in their direction. The closer I got, the more I lost control. Bucking hard and moving fast, the bike finally gave way, and I went full lock to the right, then to the left, then the right again!

It sounds cliché, but things were moving in slow motion. I was but a moment away from being thrown off my bike and having it slide into the two innocent onlookers. I was so close I could see the wide eyes of the damn-near-doomed duo staring back at me! Then my handlebars snapped hard to the left one more time and I was bucked so hard my hand lifted off the throttle.

There wasn't really a choice. When I reclaimed my grip, I pulled the throttle so hard the back tire spun fast and regained traction. Breath didn't escape me until the back end of my bike straightened out and found a patch of hard-packed gravel. I shot past my stunned audience.

Justin saw the whole ordeal from behind. My heart was racing like hell, and I pulled over to set my head straight. He was smiling like an idiot when he replayed the incident, telling me just how close I came to crashing into the parked bikes.

It was. Or so I thought. I haven't had many of those, so it felt really [expletive] good to have gotten myself out of a bad situation. As my heart slowed and my head cleared there in the desert, my ever-helpful boyfriend reminded me that I was riding in mostly gravel, not sand. I knew this, or should have. The bike needed to move around freely and correct itself, so all I needed to do was stand up and hold on.

When fear is the only thing that can hold you back, there's a choice: to embrace, or not to embrace, the crash. I chose the former, which meant taking my fears head on. The remainder of our ride into Sin City went by twice as fast. Because I was riding twice as fast! 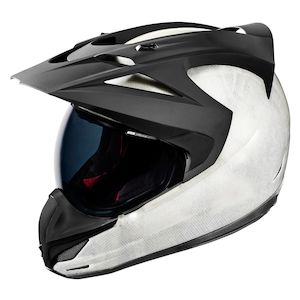