This Saturday, whoever lines up next to Josh Hill at the third annual Red Bull Straight Rhythm contest is going to feel like he’s in a race by himself.

A quarter-mile, supercross-style drag race competition, Straight Rhythm has a mano a mano knockout format. At the starter’s signal, Hill’s competitor will start his bike, and routinely blip the throttle between moments of noisy idle. Then, when the 30-second board goes sideways indicating the starting gate will fall within a 5-10 second period, he will pull in the clutch, shift into gear, roll on the throttle about a quarter turn and assume his preferred takeoff body position. Hill, however, is just going to sit there. Doing nothing. The uninformed fan might think either A: Hill’s bike isn’t working,  or B: he’s about to miss the start of this race.

The answer is actually E: Hill will be riding an Alta Motors Redshift MX, an electric motocross bike nearly seven years in the making.

Until the gate falls, Hill will sit in silence. And when he does accelerate, the electric whir – which sounds like an obscenely fast RC car – will be completely drowned out by the growl of the 250 cc four-stroke next to him. Keen observers will notice Hill tap at the center of his handlebars while airborne over the first set of jumps. That’s where he will switch the engine mapping from traction control to full power and acceleration.

“This is the perfect race to find out where we are with this bike,” Hill said. The course, while packed with whoops, triples and myriad jump combinations, has no turns and “lap” times will be under 60 seconds. Also, the promoters are willing to allow Hill to enter the 250 cc division; with 40 horsepower and 36 foot-pounds of torque, that’s where the Redshift MX will be most competitive. It weighs 251 pounds, 20 pounds more than a Yamaha YZ250F and four pounds more than a 450-class MXer.

Because it is not homologated, an Alta isn’t allowed entry into a local AMA race, but company officials say they’re currently working on meeting those obligations. Hill has been pushing the bike’s limits in testing and said the low-end power is the machine’s biggest strength.

“I feel [on power] we’re between a stock 250 four-stroke and a race team 250 four-stroke,” he said. “It’s got the response of a race bike but it doesn’t have the top speed yet. If the course is rough and technical, we’ll be right there. If it’s fast and easy, then we’ll be more challenged.”

Alta isn’t the first electric motorcycle company to the market with a model that can be ridden on the dirt, but it is the first to design, develop and build a competitive racer and this is the most high-profile moto event featuring an electric dirt bike.

Founded in 2010, Alta’s original mission was not to build an electric motorcycle. “They wanted a better motorcycle than they were racing at the time,” said Alta’s Director of Marketing, Jon Befeky of co-founders Derek Dorresteyn and Jeff Sand. “The pursuit of power and smooth led them to electric. No noise and heat. You can program the motor to do anything you want.”

Alta has been taking pre-orders for several years. On August 8, serial production began on two models, the Redshift MX and Redshift SM, a street version. MSRP is $14,995 and $13,945, respectively. There is currently a backlog of orders and Alta assembles approximately one bike a day in its Brisbane, California-based headquarters. It’s considered a Made in America motorcycle, although some parts come form foreign suppliers, such as the cells that make up the battery. The battery, a 5.8 kWh, 350V pack is assembled in Brisbane, however.

“We have a patent on how we package, cool and connect the cells,” Befeky said. “We wound up with a pack that is 30 percent more dense than Tesla’s.”

The bikes have already been entered into regional supermoto and flat-track events in the Bay Area and former MXGP winner Kurt Nicoll won the Phoenix EnduroCross final in the Vet class on September 24 (and was second in Denver on October 1) on the MX version.

“Everyone has this vision of an electric bike being a hybrid between a dirt bike and a bicycle, because that’s what everyone has done in the past,” Nicoll said during a day of practice before the Phoenix event. “An Alta is a real dirt bike.”

When I asked Hill about the difference between the Alta and the gas-powered 450 four-strokes he’s been riding for more than a decade, I was shocked at his answer. Skeptical, even.

“Nothing,” he said so quickly and abruptly it was as if someone had kicked him in the shins under the table.

Hill was a factory Yamaha rider from 2006-2010, won the 2008 Minneapolis Supercross and finished on the podium in the premier 450SX class 10 other times. In July 2010, he was practicing for a run at X Games Speed & Style gold when a botched backflip (yes, a backflip) derailed his career. He didn’t qualify for another Supercross main event until February 2013. Two years later, a wreck at the Daytona Supercross prompted him to rethink the whole professional dirt bike thing. He’s now the two-wheel motorsports marketing manager at Monster Energy, a longtime sponsor of his.

The relevance of the above aside is that Hill knows what a great dirt bike feels like. The Yamahas he rode won the Monster Energy Supercross Championship in 2008 (Chad Reed) and 2009 (James Stewart) and he’s ridden for several different brands since then.

Now in a marketing position, Hill wants to produce riding videos in locations where a gas-powered motorcycle would be quickly given away. Skateboarders and BMX riders often have secret riding spots but a traditional dirt bike can be heard from miles away. An electric bike could be his (and anybody’s, really) ticket to riding under the radar and closer to home. After sending the company a direct message through Instagram, a ride day was set up following the Santa Clara Supercross in April.

“I had no idea what to expect,” he said of his first day. “I had heard that other bikes felt flimsy and had power delays. The Alta had the feel of a factory bike. Everything is tight and it handles well. I have as much faith in that bike when I ride it as I do in the Japanese bikes.”

“They all instantly are reduced to a 6-year-old riding a bike for the first time,” he said. “They’re so stoked. A motorcycle is a motorcycle and that’s what we’re trying to work on.”

The Red Bull Straight Rhythm happens at the Fairplex in Pomona, California, and can be watched live on Red Bull TV. 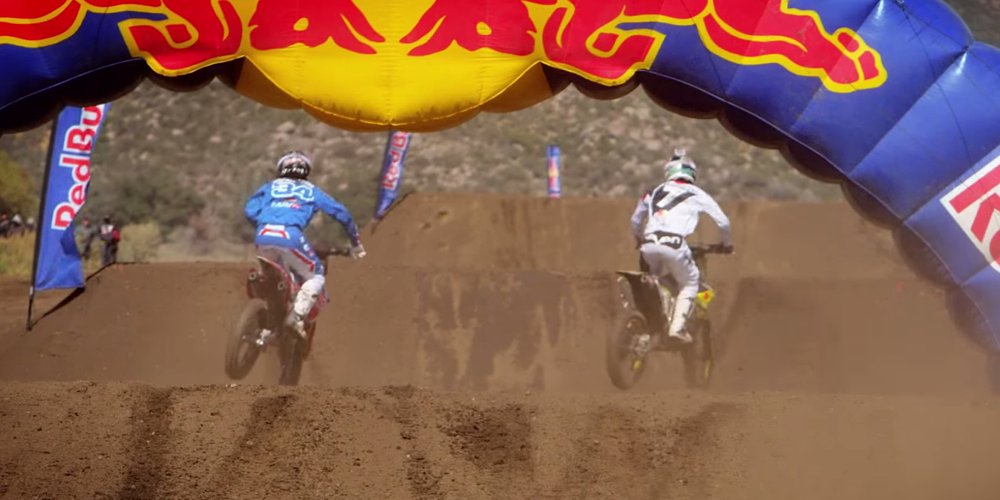