Back roads and camp fires: Falling short of the Grand Canyon

I sat on the side of the road in the fading sunlight with the Arizona State Trooper’s lights flashing behind me. I knew the drill: helmet off, license out, feigned look of surprise on my face, although this time it was a legitimate look of surprise.

I was heading south on a lonely stretch of Route 64 in Arizona leading away from the Grand Canyon. I hadn’t been speeding, my registration was up to date, and there wasn’t another vehicle on the road.

“Do you know why I pulled you over?” the trooper asked, approaching my bike.

“Honestly, sir, I don’t,” I responded, my voice a bit shaky. It never ceases to amaze me how quickly a simple question can trigger that queasy feeling in the pit of my stomach, even when I haven't done anything wrong.

The officer explained that my taillight was burned out and I wouldn’t be able to continue any further for the night. Looking around at the barren highland scrub forest of northern Arizona, I thought he was joking. I realized he was serious when he asked if I had camping gear with me, motioning to my luggage on the back of the bike. I nodded yes and he suggested a fire road about half a mile back as a good place to bed down for the night.

I tried to protest, but the officer reminded me that he was doing me a favor by not issuing me a citation for the taillight. I reluctantly turned around headed back in the direction I had just come. This was not the camping trip I had planned, but then again, this trip had gone awry long before the officer pulled me over.

I was living in Los Angeles at the time and working as a Director of Education for a Sylvan Learning Center. Four, 10-hour workdays left me with three-day weekends, not a bad gig for a 24-year-old, fresh out of college, who likes to travel on his motorbike. I decided to celebrate six months of L.A. living by getting out of town for a long weekend to visit the Grand Canyon.

The plan was simple: Load up my 2005 Triumph Bonneville T-100 with motorcycle camping gear, leave Saturday morning, spend the night visiting a friend in Las Vegas, head out to the Grand Canyon to camp on Sunday night, and enjoy a leisurely ride back across the desert on Monday.

Everything started off smoothly. Traffic thinned out as the City of Angels disappeared in my rearview mirrors. By the time I made it to the Mojave National Preserve, just north of Barstow, I-15 was all but abandoned. The lights of Vegas lit up the night as I entered the city and found my friend Cheryl’s apartment. I have never been much for gambling, but I enjoyed drinking on the sidewalk (legal there) as Cheryl gave me a whirlwind tour of Sin City.

The next morning I abandoned the interstate with the plan of taking Route 93 across the Hoover Dam, then south to Kingman, Ariz., where I would pick up Historic U.S. Route 66. From there, I would head east and then take Route 64 and roll right into Grand Canyon National Park.

The trouble started when a traffic jam in Boulder City forced me to miss the Hoover Dam and re-route south to Bullhead City to cross the Colorado River. Despite the setback, I was in good spirits as crossed the border into Arizona and took off down the famous cross-country highway.

I was overwhelmed with nostalgia for a bygone era that I wasn’t old enough to remember or fully understand. Old road signs lined the highway, advertising destinations that had long since disappeared.

The real trouble hit when I pulled into the Texaco station just south of the entrance for the Grand Canyon National Park. While attempting to fill my tank, the screen at the pump informed me that my credit card had been declined. Strange, I thought to myself, I had just activated a new replacement for my old card shortly before taking off on this trip. A quick call to the credit card company revealed that I had accidentally destroyed my new card while placing the old card securely back in my wallet. But not to worry, they told me. They would have a new card out to me within 10 business days.

They clearly didn’t realize I was sitting at a gas station in the middle of the desert with $38 in cash to my name.

For those of you old enough to remember a time where you couldn’t pay for things with your phone and not everyone had a debit card, you can get an idea of my predicament. The $12 motorcycle entrance fee for the park, along with the additional $14 for a campsite, would have left me with $12 to cover gas for the 500-mile journey back to Los Angeles. Despite the fact that I was less than five miles from the Southern Rim, it became clear I wasn’t going to see the Grand Canyon on this trip.

Feeling defeated, I turned around and headed south. I resolved to ride through the night and spend my remaining cash on gasoline and truck stop coffee. That's when I got pulled over.

Following the officer's suggestion, I set up my tent on the side of the fire road with the Triumph’s headlight illuminating the process. I dined on half a bottle of water and a pack of Planters cashews, with a half-eaten granola bar for dessert. With no wood for a fire and exhaustion setting in from the day's mishaps, I turned in early, eager to see the morning sun so I could pack up and head home.

After a restless night of constantly being awakened by the howl of hunting coyotes, I was up with the dawn, packed and ready to go. Despite being strapped for cash, I took my time getting home, locking the Triumph in at 55 mph and slowly exploring the desert as I traveled. I rode alongside the modern day Sante Fe Express, stopped in Needles, Calif., to see where Snoopy’s brother Spike was from, and found myself merging on and off I-40, picking up the original Route 66 whenever the opportunity presented itself.

I ended up back at my apartment in Los Angeles shortly before sunset, tired and sunburnt. My luggage landed inside the door and without even contemplating the process of unpacking I grabbed a cold Dos Equis from the fridge, cut up a lime, and climbed out onto my roof to reflect upon my weekend.

All in all, it was a pretty good trip. I got to see Vegas, I got to camp for free, and I got to ride my vintage-styled Triumph down a vintage highway that inspired countless others before me to do the same. If the officer hadn’t pulled me over, I probably would have hightailed it through the night and been left only with the memories of hammering down 500 miles of interstate and drinking burnt coffee. A blown 99-cent bulb made the difference. It’s funny how things work out.

It would take me three more years to make it back to the Grand Canyon (at which time, I ended up camping on the same fire road), but it only took me three days to visit my bank and request a debit card. 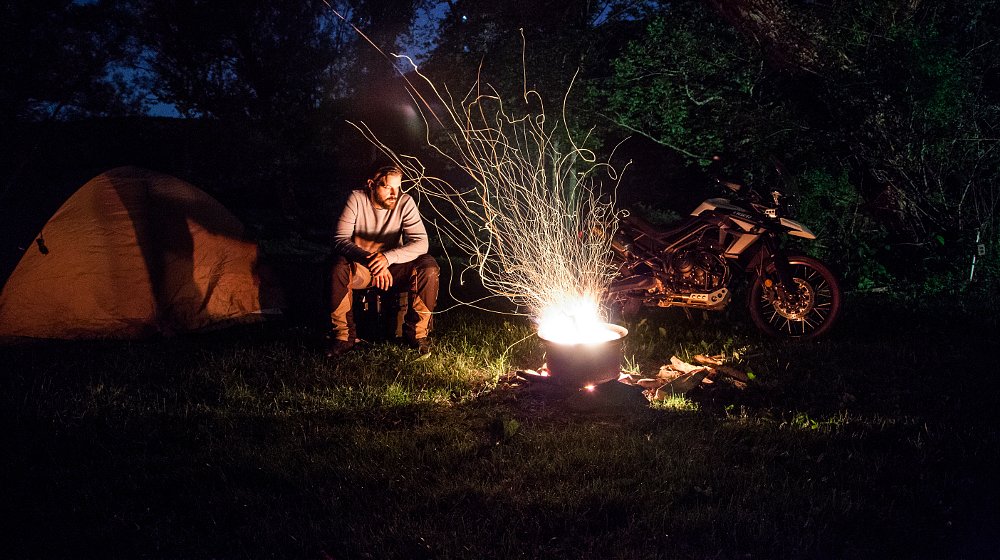 Back roads and camp fires: The Catskill Mountains Spurgeon Dunbar