There are at least 10 people missing from the office as I write this. Heading to the beach, a road trip with friends, visiting family in New England — for most people, summer is the time of year they are most likely to hang that old “Gone Fishing” sign on their office door.

However, if you are anything like me, you like to save a good chunk of your PTO for the autumn riding season. To me, September arrives with as much excitement as Christmas Eve. The promise of changing leaves, the crisp chill in the morning air, and sweaters worn around campfires all provide the perfect backdrop for motorcycle adventures.

My morning commute greeted me with a preview of what’s to come, with temperatures hovering in the high 60s, a treat compared to last week's mid-90s. It was all the inspiration I needed to put my “Busy Message” up on G-Chat, pour myself a fresh cup of coffee, and start studying the blue highways in my well-worn 2006 Rand McNally Road Atlas of the United States. If you're like me, and you find yourself gearing up for the autumn riding season, the following are a few suggestions for burning up the rest of your PTO this fall.

This location is first on my list because if you’re going to make this a destination, you are going to want to do it relatively early in the season. Those Maine nights are already getting pretty damn chilly and by the middle of October they are downright cold. This is the perfect trip to plan for September to capture the best New England has to offer.

Mt. Desert Island offers all types of entertainment from Lumberjack Shows to whale watching expeditions. You can rent a room at a B&B in Bar Harbor and have clam chowder for breakfast on the docks while waiting for the lobster boats to roll in with dinner. Main Street provides nightlife, complete with cafes, breweries, and the Reel Pizza Cinerama, where you can enjoy pizza and beer while lounging on couches and catching a movie with friends.

For outdoor types, Acadia National Park provides endless miles of hiking trails, scenic overlooks, and campsites. Trade your gasoline-powered two-wheeler for pedal power and rent a bicycle for the day to really explore the nooks and crannies of the park.

The options for reaching Mt. Desert Island are endless. On my way up from Philadelphia, I like to hit Route 9 across southern Vermont and New Hampshire or head up north a bit further to ride through White Mountain National Forest. On the way home, northern Connecticut is a must. Pick up Route 44 west from Hartford to the small town of North Canaan before jumping on Route 7 south. As all the New England states offer perfect riding this time of year, I recommend planning a giant loop with Maine being your turnaround point.

The Pacific Coast Highway is a mecca for motorcyclists, not only in the United States, but also from around the world. If you are lucky enough to live on the West Coast, chances are you have traveled a portion, if not the whole stretch, of this iconic road. What you may not have done is booked a night at one of the two lighthouse hostels along the way.

Respectively located 25 and 50 miles south of San Francisco, the Point Montara and Pigeon Point Lighthouses have been converted to hostels and are part of Hosteling International group. What this means is that for $25-$30 per person you can spend the night in a lighthouse, on a cliff, overlooking the ocean. There are common areas such as a kitchen and a reading room with games and books available to travelers. Spend your time hiking through

Big Basin Redwoods State Park, whale watching, visiting with the elephant seals at Año Nuevo State Park, or simply use these as hubs to spend your days riding the great roads in the area or visiting San Francisco. Pigeon Point Lighthouse even has a hot tub overlooking the ocean.

If you head up from Los Angeles, I would recommend camping your way up the coast and then spending a few nights at the lighthouses. Make sure to spend a night camping at Morro Bay as well as Big Sur, get a picture of the Bixby Bridge, and enjoy the great riding along the way. If you are coming down through San Francisco make sure to swing by Munroe Motors, one of my favorite European bike shops in the country. If you are thinking about visiting these lighthouses, be sure to book in advance. I found out the hard way that they fill up quickly.

I have ridden clear across Texas three times now and flown in twice. Every time, I find something new to love about the second largest state. Whether it is dancing at the Continental Club in Austin, spray painting Cadillacs outside of Amarillo, or spending a weekend with friends in Wimberley, eating as much BBQ as the Salt Lick could provide, Texas has never let me down.

If you’re not familiar with the Lone Star State, I would recommend by starting with a Butler Map of Texas Hill Country. This little guy does a great job of laying out perfect routes like the Twisted Sisters, suggesting places to eat, and giving you breakdowns of different areas and daily route suggestions. If you have the time, you should make the trek to Big Bend National Park. A few years ago, my Uncle Jim and Aunt Vickie did a two-month tour visiting all of the U.S. National Parks in the lower 48 and Big Bend ended up being their favorite. You could make an entire trip around this park, so at least plan on spending a day.

Texas is big. If you don’t have time to ride there, fly in to Austin or San Antonio, pick up a rental bike, and just start riding. Within 20 minutes, the city will fade away and you will feel as if you have been dropped into a Robert Earl Keen song.

The southern Appalachian Mountains of Tennessee, North Carolina and Georgia

So many riders have anecdotes about riding the Tail of the Dragon, yet are unfamiliar with the Hellbender, Cherohala Skyway, and all the great roads in the Chattahoochee National Forest of northern Georgia. During my time living in Nashville, I made the three-hour trek to these mountains every chance I got.

Imagine for a second that the Tail of the Dragon is the least appealing thing about this area. It’s usually overcrowded with bikes, cars, and state troopers waiting around the corner, armed with with radar guns. When you reach Deals Gap, the start of the Dragon, make the turn onto Route 28 instead. This stretch of road, otherwise known as “The Hellbender,” is one of my favorites in the country.

You’ll find that Route 28 reaches all the way to the Georgia border and then some. Once in Georgia, work your way west to the small tourist town of Helen, enjoying the roads along the way. From there it’s all curves back up to Tellico Plains, Tenn., where you can cross the border back into North Carolina on the Cherohala Skyway.

It took me years of exploring these hills to realize that some of the best roads are the ones that no one is talking about. I like to ride down, book a few nights at the Deals Gap Motorcycle resort, and then take off. I recommend hitting the Tail of the Dragon once, just to say that you did it, and then leave it in your dust. The last time my buddy Mikey and I were down there with my old VFR and his Triumph Sprint ST, we spend an entire afternoon just running a stretch of Route 28 from Deals Gap to the intersection of Route 143 and back.

The fifth location on this list is your favorite. Perhaps you live in Iowa and like to ride up to the rolling hills of Wisconsin farm country. Maybe you live in Oregon and you have a loop that takes you east into Idaho, you turn around at Yellowstone National Park, and then take the long way home through Washington State. If you are in Colorado, your last ride of the season could be a four corners ride exploring Utah, Arizona, and New Mexico.

Whatever you ride, and wherever you ride it, these next few months are the perfect time to set some vacation days aside and hit the highway.

Taking a final sip of coffee, I jot down a few notes on my calendar. The Catskill Mountains in late September to escape the Pope in Philadelphia, Virginia and North Carolina in mid-October, and the long way round to Nashville and back for a friend's wedding at the beginning of November. That should allow me to burn off some of these remaining days I have saved up.

Where are you riding this fall? 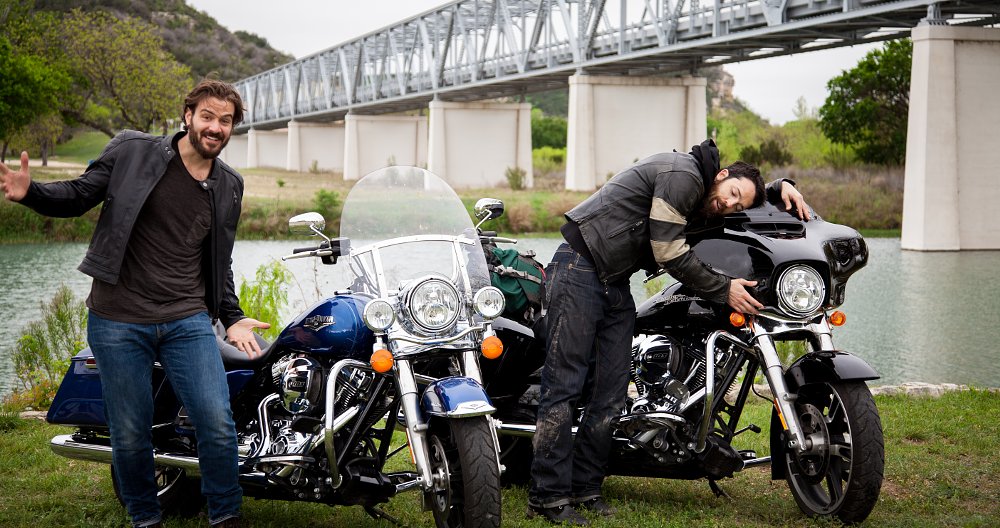 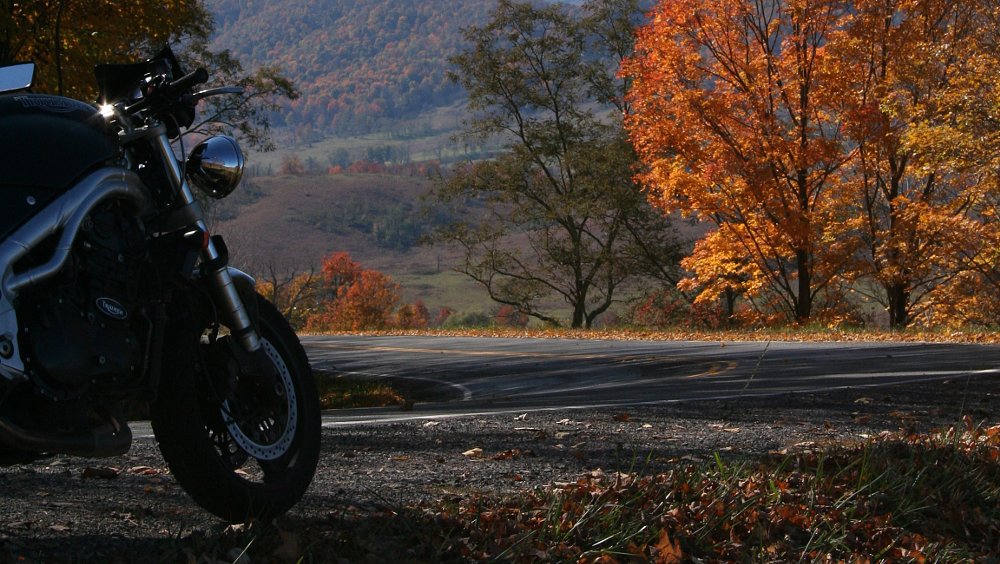